We salute the Iraqi forces and #Peshmerga that fought heroically against #ISIS and continue to attack its clandestine cells. The US and our global @coaltion will continue to support Iraq and its people to ensure this historic military victory over ISIS is lasting & permanent. 2/2 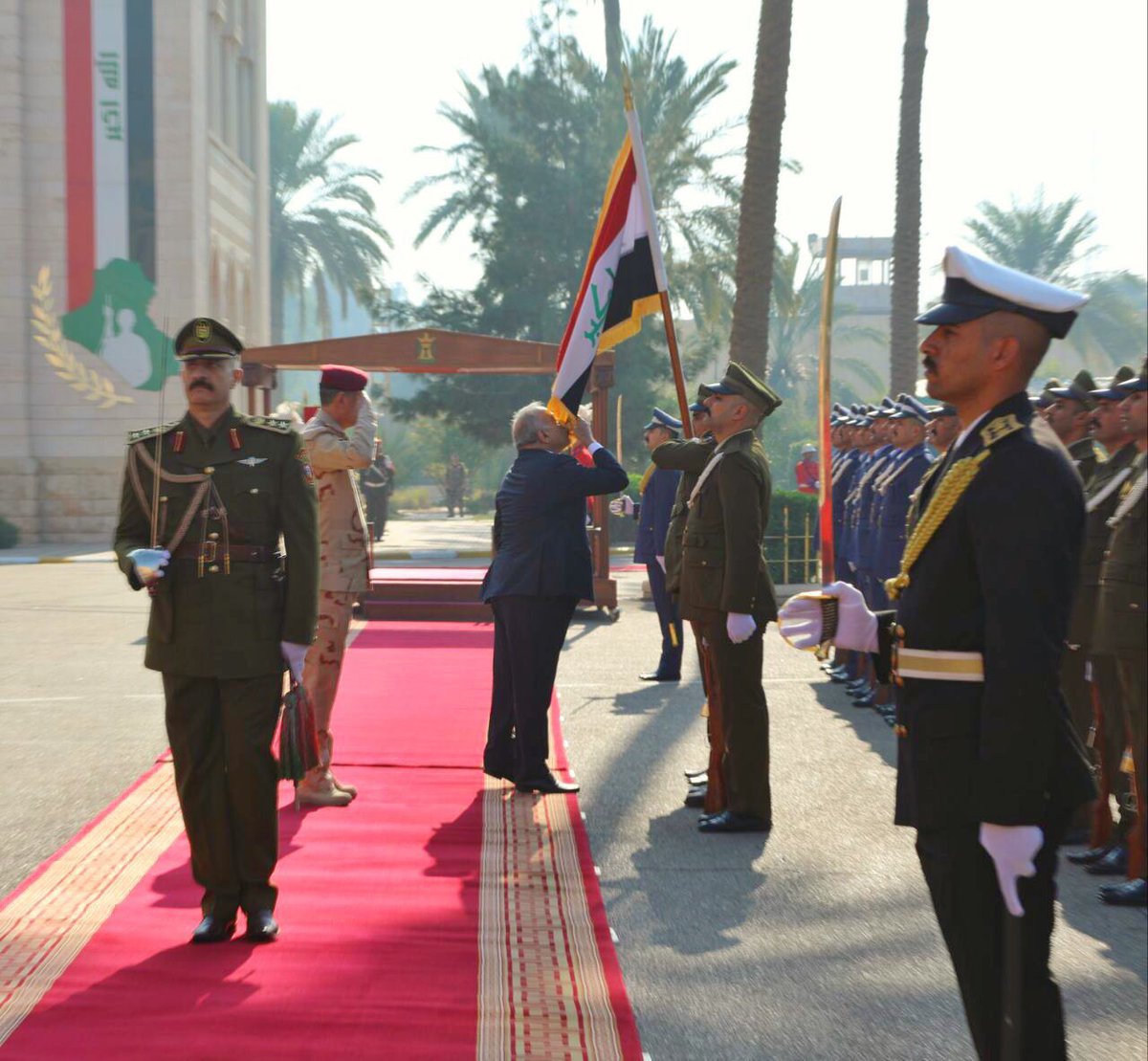 Iraq and Qatar have launched a new page of joint cooperation in the fields of economic, trade, cultural, investment and scientific, and the promotion of joint agreements and activating them to meet the desire of both countries and peoples.

“This agreement came during the meetings of the Iraqi-Qatari Joint Committee which was launched in Doha on Monday with the participation of ministries, bodies and institutions in both countries in the framework of a joint agreement to develop relations and activate them in all fields,” the ministry said.

Trade Minister Mohammed Hashim al-Ani, who heads the delegation of Iraq, said: “The meetings of the committee again give an impression of the desire of the two countries to develop their relations in all fields. The Iraqi government is very keen to start a new page of bilateral cooperation and increase the volume of trade exchange, as well as the possibility of setting up a large economic forum for Qatari businessmen in Baghdad to establish real partnerships and to launch these relations to advanced levels through cooperation between businessmen in both countries, For cooperation in the fields of investment, industry, youth, sports and culture, leading to economic integration between the two countries. “

“Iraq hopes that the meetings of the joint committee in Doha will be a step in the right direction for new paths that will advance relations between the two countries to an advanced level,” he added.

For his part, Qatari Minister of Commerce and Industry Ali bin Ahmed Al-Kuwari said: “The Qatari-Qatari meeting in Doha opens a serious page of bilateral cooperation, especially as Iraq has an economic power that will have a clear impact on the region and the world. In finding new outlets for the development of relations between our two countries, in a way that strengthens the brotherly relationship that binds our two peoples. “

He pointed out that the mutual visits of the official delegations between the two countries set indicators to discuss the mechanisms and conventions to serve the common vision that starts relations to advanced levels.

He concluded by saying that “we have noticed from the brothers in Iraq the keenness to cooperate and start a new page that takes into consideration the activation of relations in all cultural, artistic, scientific, political and economic fields.”

{Baghdad: Euphrates News} Agency received {Euphrates News} on the preliminary images of the opening of the Green Zone in Baghdad in front of citizens and the movement of vehicles on the first anniversary of the victory over gangs terrorist.

The leader of the Sadrist movement Moqtada al-Sadr, who lives in the Hananah area of the Shiite holy city of Najaf, has stepped up security around his headquarters since the outbreak of the political crisis with Iran’s allies in the Iraqi parliament over the Interior Ministry portfolio, the London-based Arabic newspaper Al-Arab reported on Monday. The Iraqi parliament failed to agree on them for the second time.

The newspaper said in a report published in today’s edition that the vast Jamahiriya enjoyed by Sadr among his followers, estimated to be millions in central and southern Iraq, may be fortified, in the words of a political analyst in Baghdad, “any Iranian recklessness.”

The Iraqi parliament failed on Sunday to hold a session to vote on the completion of the ministerial cabinet, which is short of eight portfolios, amid the dispute between the parties over the candidate for the post of Minister of Interior Faleh al-Fayadh.

“Abdul Mahdi received clear signals from the construction coalition that he would not vote for the completion of the cabin, without the presence of Fayadh,” the newspaper quoted a figure close to the prime minister as saying.

The governor of the Central Bank Ali Al-Alak said Monday that the bank maintains a high level of foreign reserves, pointing out that the bank continues its efforts to stabilize the local currency.

Al-Alak said in a speech during the opening of the fourth annual conference of the Central Bank in Baghdad and attended by “Economy News”, that ” coinciding with the first anniversary of the victories of the security forces on the organization is calling, this annual conference is looking forward to the sustainable development of the Iraqi economy,” noting that ” Continue his efforts in stabilizing the local currency. ”

“The central bank maintains a high level of foreign reserves,” he said.

And began on Monday, the activities of the fourth annual conference of the Central Bank of Iraq, in conjunction with the anniversary of the Iraqi victory day on “Daash.”

Abdulrahman Al-Humaidi, Chairman of the Board of Directors of the Arab Monetary Fund. “Economy News”

The Arab Monetary Fund said on Monday that the Central Bank of Iraq “a good example” of the development role of central banks in the Arab National Bank, pointing out that the bank maintained the stability of the currency and take many measures that contributed to the strengthening of the Iraqi economy.

The head of the Arab Monetary Fund Abdul Rahman al-Humaidi said in his speech during the fourth annual conference of the Iraqi Central Bank in Baghdad and attended by “Economy News”, “The central bank has great efforts in support of the Iraqi economy, and maintained the stability of the currency and adopted many actions and initiatives Which would strengthen Iraq’s financial situation. ”

Al-Humaidi added that “the positive social effects of the financial coverage launched by the Central Bank can not be ignored,” noting that “the bank is an example of the developmental role of central banks.”

“The Bank also contributed to the enhancement of financial coverage and the establishment of governance and transparency, and the Arab Monetary Fund praises the efforts and achievements achieved by the Central Bank and reflect on the Iraqi economy,” pointing out that “the bank was able to stabilize the dinar exchange rate and control inflation” .

And began on Monday, the activities of the fourth annual conference of the Central Bank of Iraq, in conjunction with the anniversary of the Iraqi victory day on “Daash.”

The governor of the Central Bank of Iraq, Ali Alallak, in his speech on the sidelines of the conference, which was attended by “Economy News”, that Iraq “need effective measures to extend the rule of law to address the phenomenon of non-payment of loans by the borrowers,” pointing to “the presence of more than 6 trillion dinars Of non-performing loans out of 37 trillion dinars. ”

He added that “the central bank has become a leading move in monetary policy in Iraq, and even in the Middle East and North Africa,” noting that “concealing the real sector embodied in monetary policy through many initiatives, including the industrial, agricultural and industrial lending of 5 trillion dinars, Financing small projects by a trillion and a half through private and public banks, the largest in the history of Iraq. ”

“The Central Bank was able to withdraw the economic shock suffered by Iraq through quantitative management, ie pumping liquidity to the market through the purchase of treasury transfers.”

He stressed the need to “provide a stable environment and a real will to activate the private sector and protect the national product.”

{Baghdad: Al Furat News} Joint Operations Command issued a statement on the first anniversary of the victory day on the terrorist gangs.

A statement issued by the agency {Euphrates News} a copy of it, “Timeless men, and the men of our time heroes of our security forces who have written the finest epics, and wrote their names in the record of history, they are the makers of the victory of the most prominent on terrorism, and became their heroines narrated in all forums, The testimony for Iraq and its people was a title for them, and their human stories are a white page in the forehead of those seeking freedom. ”

He added that “the victory of the gangs of terrorist gangs at the hands of all the ranks of our security forces and their various names deserve to be celebrated by the Iraqi people, who supported these forces with all their might to the challenge of terrorism. The battle was decisive and one, From December of last year, but came with a declaration of victory and the liberation of the land. ”

The statement added: “Yes, the land of Iraq has been liberated because it refuses humiliation and humiliation, because its people are lovers of life, and the triumph of victory is known as the brave fingers of our valiant forces, and the blood that has flowed on the country’s precious soil will be a dia for generations and their families safe in the necks of honorable people. Honor medals on the breasts. ”

The statement concludes by saying: “Mercy and immortality to our martyrs, the righteous and the pride and pride of those who defended the land of Iraq and the defenders of the defenders or the word, and victory is only from God Almighty wise.”