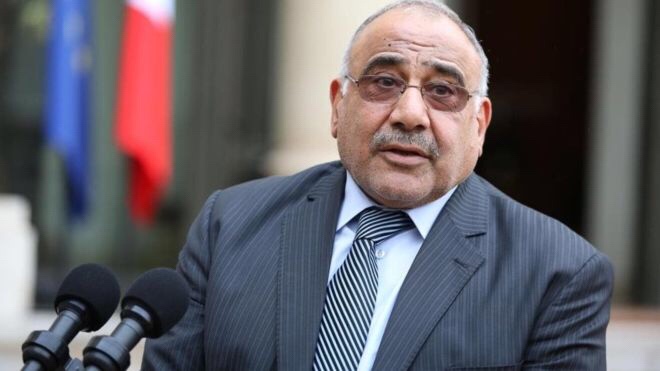 The deputy of the coalition of construction Hussein al-Aqabi, on Saturday, to the pursuit of Prime Minister Adel Abdul-Mahdi to mobilize as much as possible of parliamentary and political consensus to put his cabinet, pointing out that the presidency of the parliament waiting for the signal of the Mahdi al-Mahdi to put the cabinet cab during tomorrow’s session.

“The Prime Minister Adel Abdul-Mahdi is negotiating with all political blocs during the coming hours in order to gather as much as possible of political and parliamentary consensus.”

Revealed a political source familiar with yesterday, the details of a meeting was held, the evening the day before yesterday, between Prime Minister Adel Abdul Mahdi and a number of leaders of blocs and political parties.

The source said that the meeting was positive, and it was agreed to change the candidate for the portfolio of Interior Ministry Faleh al-Fayadh, another candidate, and the compatibility between Abdul Mahdi and the blocks of construction and reform. The source added that Abdul Mahdi is still waiting for the alternative candidate for Fayyad, so come with him and his other ministers and submit them to the House of Representatives, for the purpose of voting on them.

The head of the parliamentary bloc, MP Mohammad Khalidi, confirmed the support of his bloc to the proposal to form a new bloc in parliament, including deputies resigned from their political blocs, and undertake to assess the work of the current government, and isolate and the formation of others if not useful.

Khalidi said that the step taken by Prime Minister Adel Abdul Mahdi in the National Window was successful to go to the national space and the selection of honest and experienced personalities, indicating that this did not happen and finally yield to the will of the blocks and return to quotas.

He added that Abdul Mahdi in light of the current data, he has only two options, either resignation or failure in the government, because he did not choose the ministers freely in full, pointing out that the blessings of good supports the vision and a certain idea is currently to save the political process from its current status, A bloc of 100 deputies or more, of deputies freed from the power of their masses. “Khalidi said:” The new bloc is to assess the work of the government, and if there was no use, go to isolate it and form a new government to meet the demands of the masses. ” 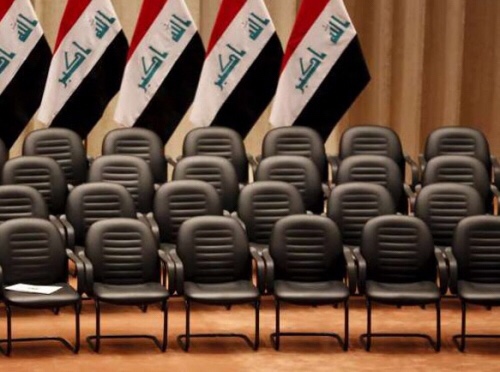 {Baghdad: Al Furat News} Revealed the legal expert Tarek Harb on the voting scenario on the remaining cabinet cabinet in the House of Representatives.

The war told the {Euphrates News} that “the Constitution specified specific percentages of the few cases facing the House of Representatives, the presence of 165 deputies achieve the quorum and the majority of the half +1 our laws to vote on important decisions.”

He added that “the constitution is lenient in certain cases, such as the declaration of emergency and war, as for the ministerial composition and vote on ministers, the Constitution allowed in such cases by a simple majority, ie (half of the audience +1), and turn the public vote to a secret.”

“The leaking of documents through the media and social networking sites is a crime punishable by law,” Harb said. “All state departments must take responsibility for uncovering the documents.”

On the federal budget law, explained the war that “the government now has shelved the budget on the shelf because of the lack of voting on the remaining 8 ministries, including internal and defense allocated to them about a quarter of the budget.”

He added that “the budget is now like frozen in the Council of Ministers, despite the claims of many parties to make a change and the duration is not enough and we will have to return to the previous budget and it will hurt the country a lot.” 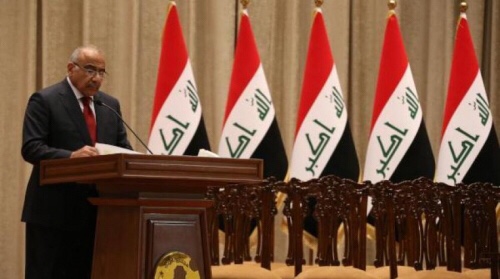 (Baghdad: al-Furat News) MP revealed the Alliance for Reform and Reconstruction Jawad al-Musawi, that the meeting tomorrow will be dedicated to the completion of the ministerial cabin of Abdul-Mahdi, while referring to “there is a serious disagreement of two previous parliament to take over the presidency of the Health Committee.”

“The parliament has not decided to reformulate the federal budget for 2019, but decided to return it to the government to study according to the program of the current government will not be delayed more than two weeks.”

He added that “the budget prepared by the previous government where a lot of violations up to {70%} of its items and we began to modify, so it was required to return to the new government and the extent of compatibility with the program of Abdul Mahdi.”

“Some party parties intervened to mean that there is no balance in the parliamentary committees and therefore we have a reform project and we have to defend it anywhere,” he said.

“We have decided to choose all ministries independently and do not belong to the parties, but there has been a trick in passing some ministers because they are not independent and they have foreign agendas and we confirm the rejection of the candidates, especially the ministries of interior and defense,” al-Moussawi said.

He stressed that “tomorrow will be the completion of the cab, but for this constructive moment adhering to Fayyad,” referring to “a complete political closure of the coalition of construction and insist on the nomination of Fayadh.”

He pointed out that “during our presence in the House of Representatives today, we found there is a great dissatisfaction of some members of the construction on this insistence, and asked us to vote by secret vote for other names.”

(Baghdad: Al-Furat News) The head of the UN mission in Iraq, Jan Kubic, Prime Minister Adel Abdul Mahdi, confidence The new government will achieve great successes and moving Iraq towards reconstruction.
A statement by the Office of the Prime Minister, received the agency {Euphrates News} a copy of it, “Abdul Mahdi received at his office in Baghdad, Saturday evening, Kubic on the occasion of the end of his duties.
“The situation in Iraq has changed for the better by liberating the entire territory, consolidating the democratic situation, forming a government representing all factions and supporting the international situation,” he said.
Kubic praised the Prime Minister and his government, stressing “his confidence that this government will achieve great successes and move Iraq towards reconstruction and the provision of services and stability.”
The Prime Minister handed over a commemorative gift to Kubic Tumina for his role as a shield in which the Sumerian guitar, which represents Iraq’s historical depth.
http://alforatnews.com/modules/news/article.php?storytopic=36&storyid=181935 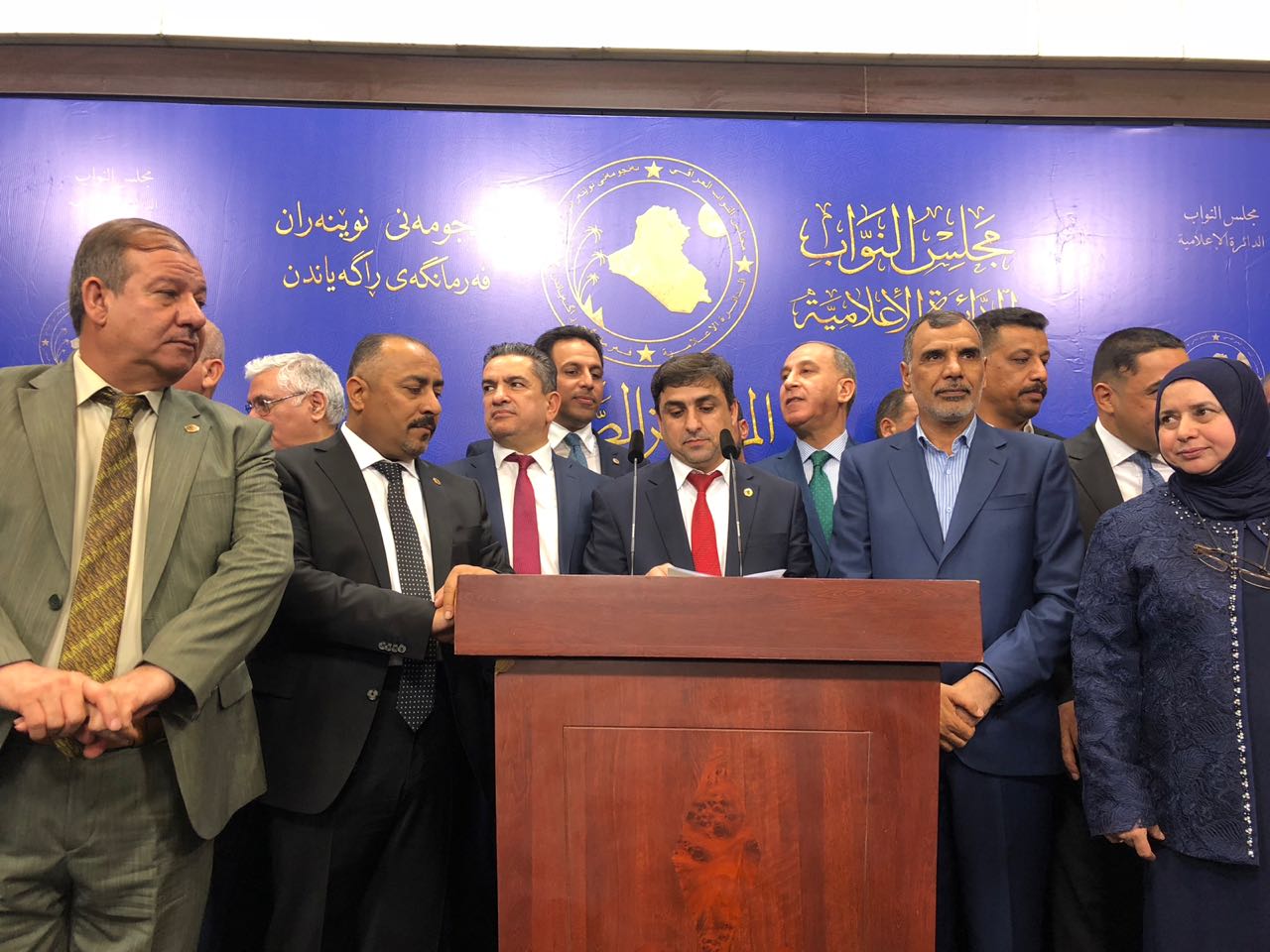 Special – Mawazin News
threatened the Coalition for Reconstruction and Reform, on Saturday, breaking the quorum of the House of Representatives scheduled to be held tomorrow to vote on the Cabinet Cabinet remaining.
The MP for the coalition Raed Fahmi said in an interview with “Mawazin News /” that his coalition has already rejected the nomination of Faleh Fayyad for the post of Minister of the Interior and Egypt to replace him with another candidate.
He added that “the reform will have to break the quorum of tomorrow’s session in the absence of replacement of Fayyad,” noting that “breaking the quorum is a democratic style and does not conflict with constitutional contexts.”
And the failure of the House of Representatives last Tuesday, in the holding of the vote on the remaining Cabinet Cab, because of the refusal of the reform alliance deputies to enter the hall and break the quorum of the contract.

Information / special …
The MP for the Fath Alliance Fadel Jaber, Saturday, that the parliament session, which will be dedicated to complete the cabin of Prime Minister Adel Abdul Mahdi, during which will pass five ministries without the Interior, Defense and Justice.
Jaber said in a statement to the “Information” / that “next Tuesday’s session, which is hoped to allocate to complete the cabin of Abdul-Mahdi will pass through five ministries only,” pointing out that “the defense and the interior and justice will be postponed to another session.”
He added that “the political differences between most of the blocks caused the completion of the completion of the ministerial cabin so far,” noting that “the defense portfolio is witnessing a major dispute between the national axis and national, while the Ministry of Justice has not been resolved so far by the Kurdish parties.”
He pointed out that “political dialogues are continuing at the moment to reach a final agreement to resolve the crisis on the remaining eight ministries of Abdul Mahdi,” explaining that “failure to resolve the remaining ministries will disrupt the government and parliamentary work.”
The Fatah Alliance has confirmed, on Saturday, not to be reluctant to replace the Interior Ministry candidate Faleh al-Fayadh, indicating that Fayadh is not his candidate, but presented his name, Prime Minister Adel Abdul Mahdi.

The General Secretariat of the Council of Ministers on Saturday directed all ministries and non-affiliated bodies to open the streets of the Green Zone experimentally for two weeks starting from next Monday.

Al-Madar obtained a document issued by the General Secretariat of the Council of Ministers stating that “coinciding with the celebration of the Iraqi Victory Day on the organization of a supporter of the terrorist and the liberation of our pure lands, the streets of the Green Zone will be opened experimentally starting next Monday for two weeks.”

He added that ‘the opening will be from 5 pm to 10 pm’, pointing out that ‘this experiment will be evaluated for the purpose of expansion’.

It is noteworthy that Prime Minister Adel Abdul Mahdi, determination earlier in the beginning of his hand to power to open the streets of the Green Zone in the center of the capital Baghdad, in front of citizens and has not been implemented so far. It is finished