By Rudaw 3 minutes ago 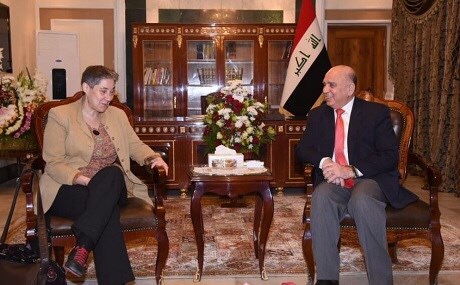 ERBIL, Kurdistan Region – Baghdad may soon begin contributing to the UNDP’s stabilization programme in Iraq, it emerged on Sunday, after a top UN official met with Iraqi Minister of Finance Fuad Hussein. Just how much Baghdad is able to contribute to UNDP’s $504.76 million Iraq budget is unclear.

Marta Ruedas, the UN Deputy Special Representative of the UN Secretary General, met with former-Iraqi presidential candidate Hussein at his office in Baghdad on Sunday.

“Discussion covered the Government of Iraq’s possible contribution to UNDP’s stabilization programme, which to date has completed more than 1,500 projects helping millions of Iraqis with education, health care, water supplies, jobs, and electricity,” the United Nations Assistance Mission in Iraq (UNAMI) said in a post on social media Sunday.

“DSRSG Ruedas and Dr. Fuad Hussein also discussed the work of UN agencies assisting the remaining 1.8 million internally displaced persons, many of whom are living in camps that were recently affected by floods,” it added.

The United Nations Development Programme (UNDP) in Iraq manages a budget of $504.76 million – the vast majority of which was donated by the governments of Germany and the United States.

Some 97 percent of its $200.22 million expenses are devoted to “early recovery” efforts, according the UNDP website.

In 2014, right before the war with ISIS began, Iraq contributed $500,000 to UNDP’s core budget. For understandable reasons, Iraq does not seem to have contributed since.

Last year, Baghdad estimated it would need between $80 and $100 billion. However, at a conference in Kuwait in February, 76 donor countries pledged just $30 billion.

To boost its finances, Iraq has tried to reboot its limping oil industry, most recently resuming Kirkuk oil exports via the Kurdistan Region pipeline to the Ceyhan port in Turkey – warming relations with Erbil. Newly elected Iraqi President Barham Salih has also been touring the Middle East and further afield drumming up support for Iraqi trade.

Although a small contribution to the UNDP stabilization programme will likely have little obvious impact, it would mark an important step for Baghdad taking charge of its future. It would be an acknowledgement that international donors will not maintain support forever.

Neither UNDP nor the Iraqi Ministry of Finance have published further detail.