“The snowball” related to the crisis of the Central Bank of Iraq rolling, and the bank and its administration are required to prove failure to manage the file of Iraqi funds in light of the continuing accusations against him, and hold it responsible for the loss of 7 billion Iraqi dinars had been announced by the governor on the relations before the House of Representatives More than a week ago.
Despite the bank’s announcement that the incident occurred during the time of the former governor Abdul Basit Turki in 2013, and his confirmation that the process of currency destruction is a routine issue of the bank from time to time, and that the money lost by the country equivalent to the value of reprinting and not the amount of the amount, , And do not rule out observers that the governor of the bank go to the victim and his removal from office. Over the accusations of mismanagement and causing the loss of $ 7 billion, began within the last two days, parliamentary and political bodies to question the amount of money allocated by the bank to finance the new building designed by the late Iraqi architect Zaha Hadid.
In the meantime, the Iraqi Integrity Commission entered the crisis line of the Central Bank, and a source in the Authority that “the body will send next Sunday a specialized team to the Central Bank to investigate the damage of funds, and forwarded to the Integrity Investigation Court at the request of the prosecution.” “The case of the 7 billion is in the files of the body since 2013, when the judge Alaa Saadi, the presidency of the body, but for unclear reasons called for the cessation of investigation on the subject on that date.” The source points out that «the bank The central bank may face the problem of its ability to prove that the sum of the money has been destroyed Ah billion dinars. “
Al-Rusafa Court announced yesterday the immediate investigation of the case, while continuing pressure by the Central Bank and Rafidain Bank, responsible for sinking the money that was destroyed after sinking into the rain, led to the issuance of a new statement yesterday, reiterating that “the issue of sinking and damage The seven billion dinars occurred in 2013 at the time of the former Director General Kamal al-Hassani, and was replaced and replaced at the time », noting that« the destruction of this amount came in accordance with the law and instructions of the Central Bank and under the eyes and control of the regulatory organs of the state. He added that “the replacement of damaged and unusable papers is the responsibility of the Central Bank, which is constantly taking these steps, to maintain the sustainability of the local currency.” The statement said the bank “surprised to raise the issue at this time.”

Speaking at a TV program on Saturday night, Iraj Masjedi said Tehran and Baghdad are considering plans to use Iraqi dinar for trade transactions or develop barter trade considering the banking problems caused by the US sanctions on Iran.

He also voiced Iran’s willingness to remove visa restrictions for travels between the two countries, saying the idea of lifting visa requirements for merchants and business people was discussed during Iraqi President Barham Salih’s Saturday visit to Tehran.

“The government of Iraq is seeking foreign investment in the economic field, and has now offered 1,200 projects worth $100 billion,” the ambassador added.

He assured Iranian investors of improving security in Iraq, saying the security conditions in the Arab country’s inland and border regions have been getting better since the defeat of the Daesh (ISIL) terrorist group.

The Iraqi president visited Tehran on Saturday with a ranking delegation for a series of political and economic talks.

After high-profile talks between the Iranian and Iraqi delegations, Iranian President Hassan Rouhani said the two neighbors can increase their annual trade from the current $12 billion to $20 billion.

Rouhani also noted that the two sides discussed ways for cooperation in the energy, power and oil industry, including the extraction of petroleum, and a plan to connect the two countries’ railroad networks. According to press reports, Sunday, Prime Minister Adel Abdul Mahdi, completed 6 bags of the remaining 8 in what it expected to submit during the parliament session on Monday or Wednesday.

Al-Sharq al-Awsat newspaper quoted the deputy of the construction coalition, Ali al-Ghanmi, as saying that “the ministries of defense and interior have not settled the dispute on them so far, with the difference between the two types of differences. At a time when the alliance of ‘construction’ to nominate Faleh al-Fayadh for the post of interior minister, Contrary to the candidate for the post of defense minister ‘.

The newspaper pointed out that ‘the agreement on the Ministries of Defense and Interior will be voted in parliament, not by consensus because of the continuing differences’.

Al-Ghanmi said that the remaining ministries have been transferred between the components. The Ministry of Displacement and Migration, which was the share of the Kurdistan Democratic Party, went to the Christian component, instead of the Ministry of Justice, which became part of the Kurds.

Finance Minister Fouad Hussein announced on Sunday, the time of submission of the financial budget for the year 2019 to the Iraqi Council of Representatives.

“I recently attended several meetings with several personalities, including Prime Minister Adel Abdul-Mahdi, ministers, the House of Representatives, a delegation from the region and others to discuss the budget of 2019,” Hussein said in a tweet to his social networking site Twitter, followed by Twilight News.

Hussein promised the meetings “good progress in the talks,” saying, “I am pleased to say that we very soon will provide a budget to the House of Representatives distinguished.”

Likely parliamentary source, Sunday, postponement of the submission of the Cabinet cab remaining to next week, while he pointed out that the reason is due to lack of agreement of the political blocs.

The source said in an interview with / Mawazin News / “The political blocs so far did not agree with the Prime Minister Adel Abdul-Mahdi on the names of candidates for the remaining ministries.”

“It is difficult to present the candidates for the eight ministries this week, maybe next week,” he said.

It is noteworthy that the House of Representatives gave confidence to 14 ministers in the government of Adel Abdul-Mahdi, while the vote was postponed to the candidates of 8 ministries. Baghdad:
A parliamentary source revealed on Sunday the intention of the Parliamentary Finance Committee to meet on Monday with the State Committee on the budget in the presence of Speaker of the House of Representatives Mohamed Halboussi.
The source told the ‘news’ that ‘the parliamentary finance committee will meet on Monday with the government committee to discuss the federal budget for the year 2019’.
He added that ‘the meeting will be attended by the President of the Parliament and the Presidency to discuss parliamentary requests and observations on the financial budget’.
https://translate.googleusercontent.com/translate_c?depth=1&hl=en&rurl=translate.google.com&sl=ar&sp=nmt4&tl=en&u=http://www.ikhnews.com/index.php%3Fpage%3Darticle%26id%3D176160&xid=17259,15700002,15700023,15700124,15700149,15700186,15700190,15700201&usg=ALkJrhjktyQaAXdy-wTDMOz5zYnyMlHVDw

A parliamentary source said on Sunday that the parliamentary committees held their first meeting since the election of their members, pointing out that the committees will consider naming the heads of committees and committee rapporteurs as well as the proposed laws and legislation.

“The parliamentary committees held their first meeting this morning to discuss the most important tasks entrusted to them, as well as the selection of the chairmen of the committees and the naming of its rapporteurs,” the source said in a statement.

The source added that “the meetings will discuss the proposed important laws as well as the outstanding laws in the current sessions.”

The House of Representatives voted in the tenth in November to choose the members of the committees and reduce the number of committees to 22 committees out of 27. End / 25 d

(Baghdad: Al Furat News) President Barham Saleh discussed with his Saudi counterpart King Salman bin Abdul Aziz Al Saud ways to strengthen relations between Baghdad and Riyadh.
“During the talks, which were attended by senior officials from the Iraqi and Saudi sides, the two sides reviewed the close relations between the two countries, ways to strengthen them and develop them in various fields, in addition to discussing developments in the region,” SPA said.
Iraqi President Barham Salih arrived in Riyadh on Monday morning for an official visit at the invitation of Saudi King Salman bin Abdul Aziz.
Saleh and his accompanying delegation held a number of meetings and meetings with Iran’s Supreme Leader Ayatollah Ali Khamenei and Islamic Republic of Iran President Hassan Rowhani and senior Iranian officials during the meeting, during which he stressed the importance of continuing efforts and joint efforts to promote relations between the two countries and peoples, The importance of regional stability and security for the progress of all countries was also stressed.
These visits to neighboring countries are part of efforts to establish best relations with all countries in the region on the basis of common interests, safeguarding the independence and sovereignty of States and providing opportunities for cooperation and understanding for the security and peace of countries and the region and their progress.
“http://alforatnews.com/modules/news/article.php?storytopic=36&storyid=180240 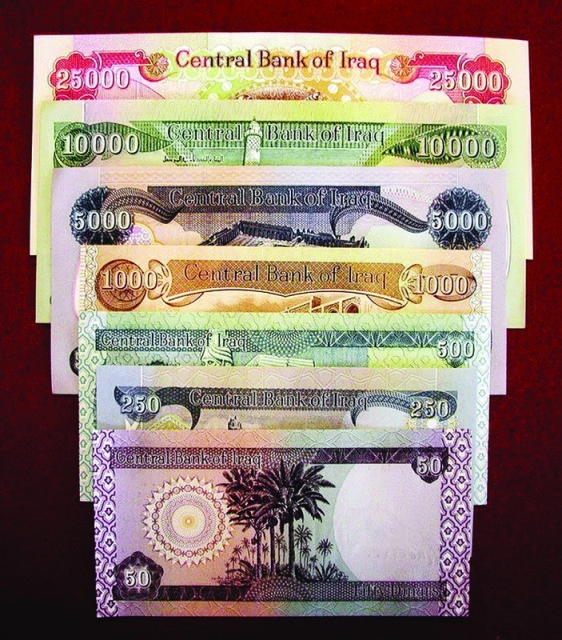 Special – Mawazin News
MP Naji Radis al-Saidi, on Sunday, the place where the printing of the Iraqi currency, pointing out that it cost 4 cents per paper.
“The Central Bank was in the past printing the banknotes of the Iraqi currency in Switzerland, but he changed the place of printing and is currently printing at the British Institute in London and it is supposed to be specifications prevent damage,” Saidi said in an interview with Mawazine News.
“The cost of printing one banknote is between 4 and 5 US cents, and then the currency is transferred to Iraq,” he said.
The director of the issuance in the Central Bank Ihsan al-Yasiri said that the Central Bank of printing a thousand papers of the category of 25 thousand dinars in Arson international companies at less than $ 60, noting that the bank will not spend a lot of liquidity to print the new monetary categories because they cost a few. / H

On Sunday, the Association of Iraqi Private Banks held a training course on “Managing liquidity risk and interest rate” at the headquarters of the Association, with the participation of 34 trainees from the Central Bank and government and private banks.

“This training program will enable us to understand the challenges and recommendations needed to manage the liquidity risk,” said Ahmed Al Hashemi, director of administration and training at the Association of Iraqi Private Banks, during his speech at the opening of the session. “Liquidity risk has long been one of the main drivers of the crisis, During the early phase of the liquidity crisis, which began in 2007, many financial institutions, regardless of their capital adequacy level, are still struggling because they do not manage liquidity properly.

“The course will last for four days for the period 18-22 / 11/2018,” Hashemi said, adding that participants at the end of the program will be able to review the lessons learned from liquidity management in the current crisis and use a structural approach to assess liquidity risk management and asset and liability management and funding strategy Understanding how banks can anticipate, control and perform stress checks on the funding sources available to the institution and build an emergency strategy to deal with external cash flow pressures.