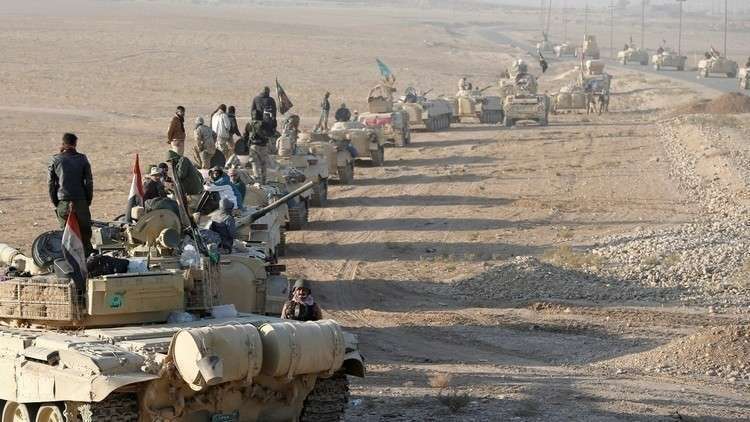 The Joint Operations Command in Iraq confirmed on Saturday that the Iraqi border with Syria is fully secured and monitored.

“Iraqi forces completely secure the border and prevent any infiltration attempts by elements of the organization,” he said in a statement to RT. “We are pushing towards our territory and imposing complete control over the border.”

“There are sometimes attempts by elements,” he urged, “to reach into Iraqi territory, but the forces stationed there and the operations we are conducting on a continuous basis to end all those attempts.”

The ongoing Baghdad International Fair, in addition to inviting and promoting international and regional economic investment projects for Iraq, truly highlights the trade and expertise of Iraqi painters and skilled craftsmen.

This year’s Fair comes as Baghdad is enjoying peace after many years of terrorism and violence, and this has encouraged more than the regular numbers of visitors who have come to stroll, sample the products and shop.

With a venue as large as a high-school gymnasium, the local entrepreneurs at the Trade Fair lure visitors to their stalls showcasing their delicate, ornate and beautiful products. For bargain prices, one is sure to walk away with hands full of precious items and gifts.

“The formation of the new government created an opportunity for Baghdad and the region to solve problems and greater cooperation,” said the head of the Kurdistan Democratic Party Massoud Barzani and the deputy assistant secretary of state for Iran and Iraq affairs Andrew Beck.

A statement issued by his office, received the agency {Euphrates News} a copy of it today, that “Barzani and Andrew Beck, discussed during the meeting on several issues, especially relations between Erbil and Baghdad, describing the re-export of Kirkuk oil through pipelines in the Kurdistan region by the right decision.”

“The delegation expressed appreciation for the position of Barzani and the government of the region on the export of Kirkuk oil through the pipelines of the region,” stressing that “the two sides agreed that the political situation after the Iraqi elections and the formation of the new government, created the opportunity to the region and Baghdad to address problems and coordination and cooperation between them, Not to create obstacles to this new opportunity. ”

He added that “the situation was discussed in the province of Nineveh and Kurdish areas outside the administration of the region, and exchanged views and views on ways to normalize the situation in those areas and how to manage, while securing the rights and demands of religious and national components and the return of displaced persons to their areas.”

(Baghdad: Al Furat News) Director General of the Trade Exhibitions Company Hashim Mohammed stressed the absence of chaos, “as some claim” in the corridors of the Baghdad International Fair.

“Last year, the number of visitors to the Baghdad International Fair reached 270,000, and the amount was only 1,000 dinars,” Mohammed told AFP. “The company is self-financing, not central funding, and it is paid to pay employees.”

“The amount allocated to enter the exhibition is 1500 dinars as a result of the service of visitors and do not charge the company money,” he said, pointing out that “all those who entered the exhibition saw the change that happened clearly.”

“We respect different points of view, accept criticism, and we are not perfect.”

(Baghdad: Al-Furat News) The General Secretariat of the Council of Ministers decided to disrupt the official day of Tuesday on the occasion of the birth of the Prophet of Mercy (may Allah bless him and grant him peace).

The leader of the Islamic Revolution in Iran, Ayatollah Ali Khamenei, told President Barham Salih that the precise knowledge of the enemy and friend is very important in foreign policy.

“The relations between Iran and Iraq are unmatched,” Imam Khamenei said during a meeting with Barham Salih in Tehran on Saturday evening. “Iraq is a strong, independent and developed country that is very useful to Iran.”

Imam Khamenei pointed out that “the precise knowledge of the enemy and friend is very important in foreign policy,” stressing that “some regional countries are hostile to the Shiites and the Sunnis of Iraq and must stand before them strongly.”

For his part, Barham Salih said: “My meeting with you is a great honor and my visit to Tehran bears a clear message that the elements that unite us are rooted in history and will not change.”

BAGHDAD (Reuters) – Iraq’s parliament is witnessing a new and resolute era under the leadership of Mohammed al-Halbusi, and thanks to the cooperation of many of his loyal and patriotic deputies, MP Talabani said Saturday.

The Taliban said on its front page ‘Facebook’ is wrong to think that the House of Representatives and his presidency are the weakest link. They are trying to target him as in previous sessions. ‘

She added that ‘the next stage will prove to them that the parliament is witnessing a new era, firm, strong and courageous, not slogans, President Mohamed Halbusi and many of his loyal and patriotic deputies’. Pointing out that ‘the real accused who was and still has the money and is the cause of corruption and failure’.

Talabani said ‘we will defend our legislative institution by activating the parliament and accelerate the issuance of resolutions and legislation in the service of citizens, and tighten control and accountability spoilers and waste of the country’s budgets’.

The coalition of the Sadrists led by Moqtada al-Sadr, on Saturday, that will be changed 6 candidates for the remaining ministries, while referring to the exchange of ministries between the political blocs.

The MP for the Alliance Qusay Mohsen in an interview for / Mawazin News / “The information available to us indicates that the political blocs exchange some of the remaining ministries among them.”

He added that “there is a change in the candidates submitted to the remaining ministries and those who were not put to vote in the session of granting confidence to the government of Adel Abdul-Mahdi,” noting that “there are changes in 6 candidates.”

It is noteworthy that the House of Representatives gave confidence to 14 ministers in the government of Adel Abdul-Mahdi, while the vote was postponed to the candidates for eight ministries.

Kurdistan Region government spokesman Sven Dziyy said on Saturday that the re-export of Kirkuk oil is a positive and very important step, noting that it will pave the way for resolving the differences between Baghdad and Erbil.

“This decision should have taken a period because of the financial revenues it would have had on the public budget, but because of the political problems and positions taken by the previous government, this step was delayed,” Dziay told Mawazine News.

He added that “this agreement is a first step will pave the way to resolve more differences between Baghdad and Erbil, a good position is taken in the government of Prime Minister Adel Abdul Mahdi and the two parties use the Kurdistan Regional Government and the federal government and a prelude to a subsequent agreement in the field of oil and gas and investment and border crossings.” / H

A statement issued by Barzani’s office said that the latter received at Salahuddin Andrei Bek, deputy assistant secretary of state for Middle East affairs, and his accompanying delegation, which included a number of diplomats from the Foreign Ministry and the US Embassy in Baghdad.

The statement said during the meeting discussed the political situation in the region and the political and security developments in Iraq as well as relations between Erbil and Baghdad, and welcomed the decision of the Iraqi government on the re-export of Kirkuk oil through the Kurdistan Region, describing it as the right decision.

The delegation also expressed its thanks to the position of Barzani and the government of the region on the export of Kirkuk oil through the pipelines of the Kurdistan Region, according to the statement.

The statement added that the two sides agreed that the political situation after the Iraqi elections and the formation of the new government, created the opportunity for the region and Baghdad to address the problems and coordination and cooperation between them, hoping not to create obstacles to this new opportunity.

At the end of the meeting, they discussed the situation in Nineveh and Kurdistan regions outside the region’s administration, and exchanged views and views on ways to normalize the situation in these areas and how to manage them, while securing the rights and demands of religious and national components and the return of displaced persons to their areas.

In the same meeting, the delegation expressed appreciation for the role of the Peshmerga in the war against Da’ash and in ensuring security and stability, stressing that America always respects the courage and sacrifices of Peshmerga forces of Kurdistan.