ERBIL – The top Iraqi officials have intensified their efforts to pass the 2019 budget bill and conclude the formation of the new cabinet as soon as possible as eight ministerial posts are yet to be filled.

The Kurdistan Region’s share from the federal budget has been deducted from 17 to 12.67%, as a result of which, the Kurdish factions at the Iraqi parliament have expressed concerns over the budget share.

The Kurdish representatives argued that the rights of the people in Kurdistan Region and Peshmerga forces’ constitutional rights have not been preserved in last year’s budget bill.

The Minister of Commerce Mohammed Hashim al-Ani formed a high-level committee to study the status of the ration card and the amounts allocated for the purchase of its items, announcing his request to secure adequate financial allocations to ensure the provision of ration card items over the course of a full year.

Al-Ani said in a statement, received by the agency {Euphrates News} a copy of today, “a number of measures to increase the financial allocations for the purchase of ration card items and increase its vocabulary as well as improve their qualities through the agreement with global origin.”

“A high-level committee has been set up to study the status of the ration card and the amounts allocated for the purchase of food items,” he said, adding that “a new roadmap has been drawn up, including a request for increased financial allocations for the purchase of food items over the course of a year. Financial allocations “.

He promised to work on “including this in the law of the general budget,” noting that “the high poverty rate, which exceeded in some provinces, 30 percent,” he went on to say, “This requires us to take firm and effective measures to help poor families through ensuring the nutritional status of those covered by the ration card system, Number of more than 36 million Iraqi citizens. ”

The Minister of Commerce said that “the ministry is serious this time in securing the food basket and improve its quality through mechanisms are being implemented, as well as work to increase the financial allocations through the General Budget Law for next year and the possibility of processing food vocabulary throughout the year.

He also referred to “the proposal to increase the quantities covered by the Social Welfare Act and equip them with full vocabulary.”

“The Vocabulary Support Program includes the addition of new materials such as milk and tea produced at the Iraqi-Vietnamese company’s farms, which are good qualities, as well as hiring Australian, Canadian and American exporters to buy wheat and rice to support nationally produced quantities through the marketing campaign for Iraqi farmers and farmers,” he said.

The Minister of Commerce to “recall the existence of new ideas for the development of the mechanisms of the ration card through a plan to ensure the processing of citizens basket of food at once and not fragmented as it loses the citizen accurate timing and may contribute to the change of vocabulary with poor qualities.”

A parliamentary source revealed Saturday that Majida al-Tamimi was appointed to head the committee to follow up the implementation of the government program and strategic planning.

The source told Al-Ghad Press that “the vote was held inside the parliament on the distribution of parliamentary committees and the voice of the House of Representatives on Saturday, on the inauguration of Dr. Magda Tamimi to head the committee to follow up the implementation of the government program and strategic planning.”

The source said that “on Sunday will be voting on the remaining presidencies of the parliamentary committees.”

The National Card Directorate in the Kurdistan Region said on Saturday that the delivery of the card to citizens begins at 2 pm each day, specifying the issuance fees and penalties for loss and prevent the receipt of more money than the citizens.

“The national card will be distributed to citizens as of Saturday,” the statement said. “The cost of extracting the national card is only 5,000 dinars for the first time and 10,000 for renewal or damage.

The statement added that citizens who completed all procedures for the issuance of the revised card after 2 pm to receive them in offices and directorates and not during the morning hours.

The statement also pointed out that the extraction of the national card goes through a number of procedures, including filling out the special form at the book of petitions and bringing the certificate of Iraqi nationality and the identity of the civil status and the original information card, indicating that the newly born children have another special form, but the national card is extracted for children over the age of 10 years Just.

{Baghdad: Euphrates News} The three presidencies stressed the need to speed up the resolution of the file of vacant ministries and the completion of the ministerial cab.

A statement issued by the Presidency of the Republic, received the agency {Euphrates News} a copy of it today, that “the presidents of the Barham Salih and the Council of Ministers Adel Abdul Mahdi and MPs Mohammed Halobsi reviewed during the meeting held at the Peace Palace in Baghdad on Saturday evening, the

most prominent developments in the political arena in the country And the ongoing movement to complete the cabinet cabin and submit the names of ministers to the House of Representatives to give them confidence and direct the tasks of their work.

The meeting stressed the need to discuss and approve the general budget law for the next year, taking into account the provinces affected by terrorism and attention to poor segments, and taking the necessary amendments to address the problems contained in the draft law, and promote the economy and service reality, pointing to give attention to investment projects in the current budget and subsequent.

“The meeting also touched upon the developments in the security situation in the country and the Iraqi-Syrian border, which is witnessing the activity of the terrorist organization, stressing the necessity of vigilance and support of the security forces of all types and formations and preserving the gains of victory.” An informed source said Saturday that a contract had been signed   The three presidencies, held a meeting at the Peace Palace in Baghdad.

The source said that ‘the presidents of the Republic Barham Salih, ministers Adel Abdul-Mahdi and Parliament Mohammed Halbusi, just held a meeting of the three presidencies in the Palace of Peace’.

(Baghdad: Al-Furat News) Prime Minister Adel Abdul-Mahdi, on Saturday, the breadth of the country’s investment map and called on Arab countries to strengthen them.
“Abdul Mahdi stressed that Iraq opens its doors to its brothers and friends to promote investment opportunities and cooperation that serve the common interests and promote security, peace, development and employment opportunities,” a statement from Abdul-Mahdi’s office said.
“The liberation of the Iraqi economy from the rental economy is a major task and a key priority after liberating the land from the terrorist,” he said, adding that Iraq is setting its feet on the right path to build its economy and reconstruction in cooperation with fraternal and friendly countries. Iraq is serious in cooperation to overcome obstacles and difficulties and the remnants of previous regimes and terrorism. ”
He stressed that “Iraq’s infrastructure was destroyed as a result of internal conditions, regional and international, requiring the cooperation of all to support Iraq in the reconstruction phase.”
He added: “The investment map is wide and diverse and includes all areas in order to achieve the aspirations of our people, reviewing the enormous physical and human resources enjoyed by Iraq, thus enhancing the chances of success of investments.
He reiterated his welcome to all countries participating in the Baghdad International Fair and international and local companies, wishing this session success and achieving real results that meet the needs and aspirations of our people.

Prime Minister Mr. Adel Abdul Mahdi @AdilAbdAlMahdi: The investment map is wide and diverse and encompasses all areas in order to realize the aspirations of our people. 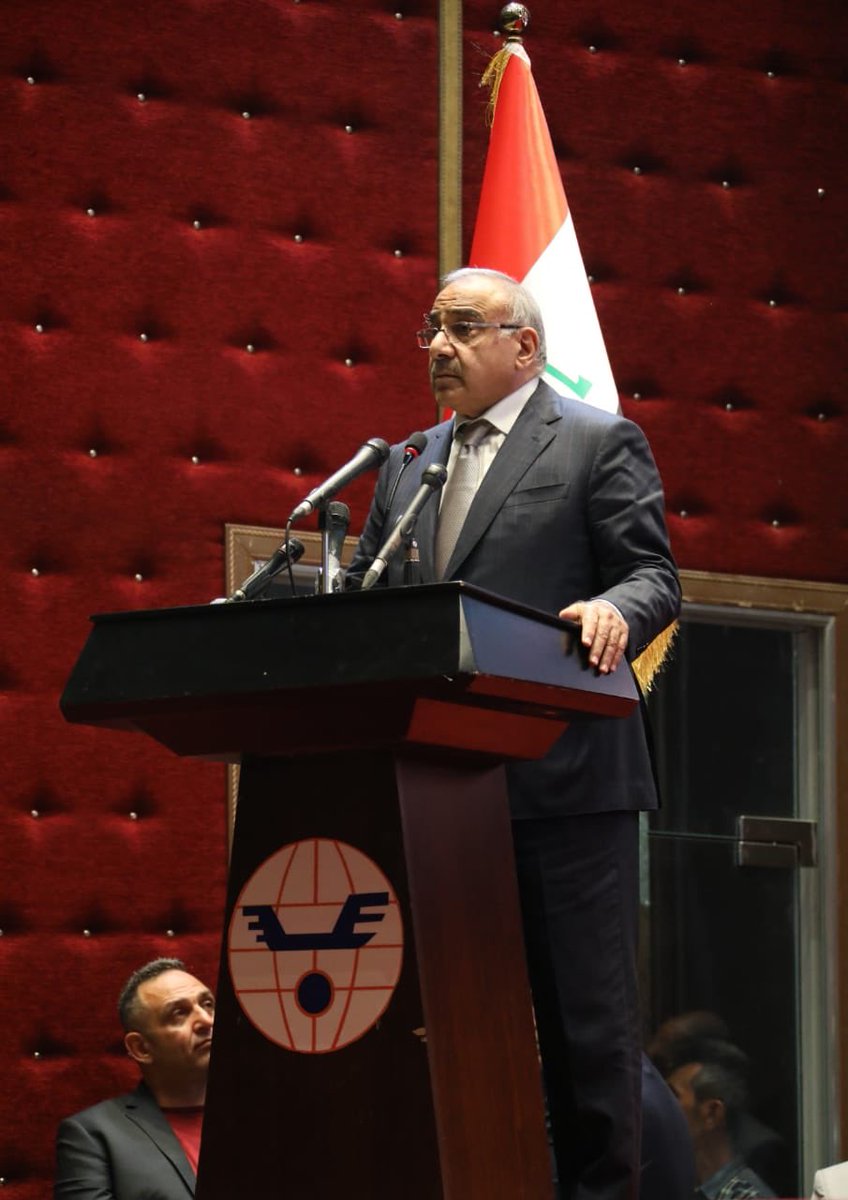