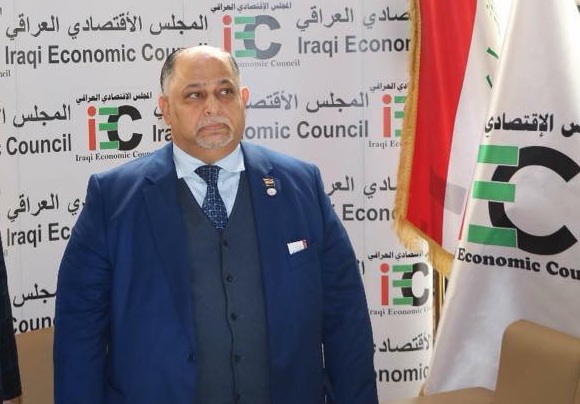 BAGHDAD –
The Iraqi economic council on Friday stressed the importance of Iraq’s transition from the totalitarian economy to a market economy or free economy, stressing that investment is the solution.
“We congratulate the Prime Minister Adel Abdul Mahdi and the 14 ministers,” said Ibrahim al-Masoudi, head of the Iraqi Economic Council. “We have the confidence of the parliament and we hope to complete the rest of the ministries.”
He added that “there have been attempts on the ground to develop the economy but shy and not commensurate with the stage and what Iraq aspires to move from the totalitarian economy to the market economy or free economy,” stressing that “we focus on there is support for investment and investors and got some decisions, but still Do not meet ambition. “
He pointed out that “investment in Iraq is the solution and the private sector is part of the investment, but the government banks, which accumulate state funds and funds of citizens and a large proportion of the banks of Rafidain and rational and trade, agricultural and industrial, some of them did not rise to his responsibilities.
“We hope that ministers and all relevant ministries will deal with the private sector in a stronger and easier way and be more like a consultant in every ministry,” he said. “We have many proposals and we discussed the prime minister a few weeks ago and found him welcome.”
He pointed out that “the government program despite the weakness of the paragraph on the private sector, but an integrated program and most important is the transition to a market economy and strengthen the approach of partnership with the private sector.”
He pointed out that “the time has come for the country to turn into a corner for economic performance and manage the simplest things because this is not the role of states and the failure that occurred is because of slack in the role of government, which leads to the loss of dozens of companies.”
He pointed out that “the investment law is theoretically more than good, but our problem is in the implementation.” He stressed that “if we overcome this delay, fear and hesitation from irresponsibility, we think we will follow the path of success.”

The Secretary of the Council of Ministers of the Kurdistan Region Amang Rahim, Friday, the Kurdish deputies and the new finance minister in the federal government Fouad Hussein, to stop the draft federal budget bill for 2019, and guarantee the right of the Kurds.

Rahim suggested in a publication on his Facebook page that “the draft federal budget bill for the year 2019 should be suspended in the forefront of the work of the Kurdish deputies in the House of Representatives and the new federal government, especially the Minister of Finance,” noting that “the project is still In the Ministry of Finance has not been approved as a bill in the meeting of the Council of Ministers. “

He added that “the current stage has opened the possibility that this draft guarantee for the rights of the Kurds more,” pointing out that “just arrival to the Council of Ministers and the parliament will be the majority of the votes in the role and adjustment will be difficult and in the interest of the Kurdistan region.”

“The importance of the participation of the Ministry of Finance and Economy in the provincial government in the formulation of the articles in the draft, which are related to the region, in particular to ensure the share of 17% of the budget for him, of revenues and not expenses,” he reiterated, “the budget issue National, and directly related to the lives of citizens of the Kurdistan region, and need to be defended by all and one position.

(Baghdad: Al Furat News) Prime Minister Adel Abdul Mahdi received a telephone call from British Prime Minister Theresa May on Friday.
She congratulated Mai Abdel-Mahdi, according to a statement of the Prime Minister’s Office received the agency {Euphrates News} a copy of it, “on the occasion of the formation of the government expressing the support of the United Kingdom to the Iraqi government in all areas.”
He added, “During the communication, bilateral cooperation between the two countries was discussed and ways to develop it, especially in the sectors of security, reconstruction and investment.”
“Iraq is keen to maintain positive relations with all neighboring countries and the international community while protecting Iraq’s independence and sovereignty,” he said.
Theresa Mai invited Abdul Mahdi to visit London, in turn Prime Minister invited May to visit Baghdad.
http://alforatnews.com/modules/news/article.php?storytopic=36&storyid=178565

The US State Department announced on Friday that its minister, Mike Pompeo, has confirmed support for the Iraqi government’s efforts to restore Christians and minorities to their areas devastated by a militant organization during its invasion in mid-2014.

This came during a telephone conversation conducted by Pompeo with the new Prime Minister Adel Abdul Mahdi.

The ministry said in a statement today that Pompeo “congratulated Abdul Mahdi on his official appointment as prime minister and his successful efforts to form a new government of Iraq.”

“The minister pledged to work closely with him to help his government achieve stability, security and prosperity for all Iraqis,” the statement said.

The statement added that Pompeo “confirmed his support for the government’s efforts to ensure security so that Christians and other minorities can return to the areas of their ancestors, which was destroyed in Iraq.”

(Baghdad: Al-Furat News) The Prime Minister announced the Commander-in-Chief of the Armed Forces, Adel Abdul Mahdi, assuming the duties of the Ministry of the Interior, an agency until the appointment of a minister of origin.

The order was issued Diwani predicting Abdul – Mahdi dated on Thursday, stating “based on Article 78 of the Iraqi Constitution and Binas the requirements of public interest , we have decided the following:

First , take care of the Minister of the Interior {agency functions} until the interior minister label.

Second , executes the command starting from the date of issue.

the House of Representatives, granted its on Wednesday, the confidence of Adel Abdul Mahdi , president of the Council of Ministers and 14 ministers as well as the voting on the government curriculum.

(Baghdad: Al-Furat News) A presidential decree was issued, appointing a permanent representative of the Republic of Iraq to the United Nations in Geneva, Switzerland.

According to the decree signed by the President of the Republic Barham Salih: Based on the provisions of Article 73 (VII) of the Constitution and on the basis of what the Minister of Foreign Affairs has presented, we have drawn the following:

First: Wadih Betty Hanna is appointed Permanent Representative of the Republic of Iraq to the United Nations In Geneva.

Second: The Minister of Foreign Affairs must implement this decree.

Third: This Decree shall be implemented from the date of its issuance and shall be published in the Official Gazette.

He is the third leg of his mission as head of the Iraqi mission after the Philippines, where he worked since 2010 and then moved to Spain in 2013.

He is a university professor To a diplomat after he received his master’s and doctorate degrees from the University of Minsk, in Belarus

The legal expert Ali al-Tamimi, on Friday, not to consider the Vice-Presidents of the Republic employees, and therefore can not get me pensions after the end of their term, noting that the Prime Minister on a pension after the end of his mandate.

Al-Tamimi said in a statement to Al-Maaloumah that “the vice-presidents can not be considered as appointed by law. They are like advisers appointed by the prime minister. They do not have salaries and privileges because the advisor is appointed by contract.

He added that after the end of his term, the prime minister receives a pension, because he is similar to the employee under the constitutional privileges stipulated in article 78 of the constitution. Even in the unified pension law, he gets a percentage of the last salary.

He pointed out that “the constitution provides for not to combine the salary of Parliament and any other salary, and therefore the outgoing Prime Minister and the current deputy in parliament, to give up one of his salaries.” End 25 n

Minister of Oil Thamir Abbas Al-Ghadhban stressed on Friday the importance of upgrading the job performance of oil sector workers, which is the real criterion for evaluation, differentiation and excellence, pointing out that the ministry will proceed with the implementation of plans to increase production of oil, gas and derivatives.
Al-Ghadhban said in a statement read by “Economy News” that the tasks and responsibilities assigned to the oil sector impose and require all of us to work hard to raise the level of performance of workers, in order to build a solid base for the national effort will be able to develop the oil and gas industry and meet the requirements of plans and future goals.
Al-Ghadhban added that we should go ahead with the implementation of plans to increase production of oil and gas, oil derivatives and development of oil facilities, as required by the national interest, as well as upgrading infrastructure, modernizing training programs and improving the performance of workers in this vital sector. And at the same time praised the oil workers who have proven their ability to meet the difficult challenges and achieve great achievements.
The oil minister pointed to the responsibility of the government and the leadership of the oil sector in providing the basic requirements for work, creativity, achievement and innovation. He urged the new oil minister officials in the oil formations to follow up the work site, and the presence with the workers and the conditions and details of work in oil projects and commitment to the implementation of the government program.

The World Investment Forum of the United Nations in Geneva, Iraq, has received a certificate of appreciation for its efforts in simplifying the procedures, completing the guidebook, completing the transactions, the responsible person and the time required to complete them.

“The Ministry of Commerce Registrar of Companies received 10 points in the assessment of the 10th World Investment Forum held in Geneva and Iraq was honored with three of the 138 countries participating in the forum,” said the Director General of the Ministry of Commerce and member of the Iraqi delegation to the Forum. “He said.

“The forum informed the General Secretariat of the Council of Ministers of its decision to award the certificate to a number of Iraqi employees for their efforts to receive complaints and transparency of work as well as speed in the side of transactions and reduce time.”

It is noteworthy that the Registrar of Companies in the Ministry of Commerce operates according to clear and transparent mechanisms based on the laws in force and instructions for registration of domestic and international companies, thus contributing to increase investment and attract international companies.

This is the first time that Iraq has received a certificate of appreciation from the United Nations World Investment Forum.

The US administration hailed what it described as a smooth transition after Adel Abdul Mahdi received the premiership from Haider al-Abadi.

adding that the international alliance against Da’ash expressed his gratitude for Abbadi’s term of office and his leadership of Iraqi forces “Which has made our world safer.”