URGENT: The date of the sixth day of Wednesday is set for the presentation of the government line before parliament

In the policy of October 22, 2018 comments on the identification of the six o’clock on Wednesday evening to vote on the government of Abdul Mahdi closed223 visits

BAGHDAD / A Kurdish source close to the Kurdistan Democratic Party (KDP) said on Monday that the post-election election results in Kurdistan indicate that Najran Barzani will be prime minister for a second term.

The source, who asked not to be named, said that “the Kurdistan Democratic Party will form the new Kurdistan region, and the sighs indicate that Najran Barzani as prime minister of the region for a second term.” 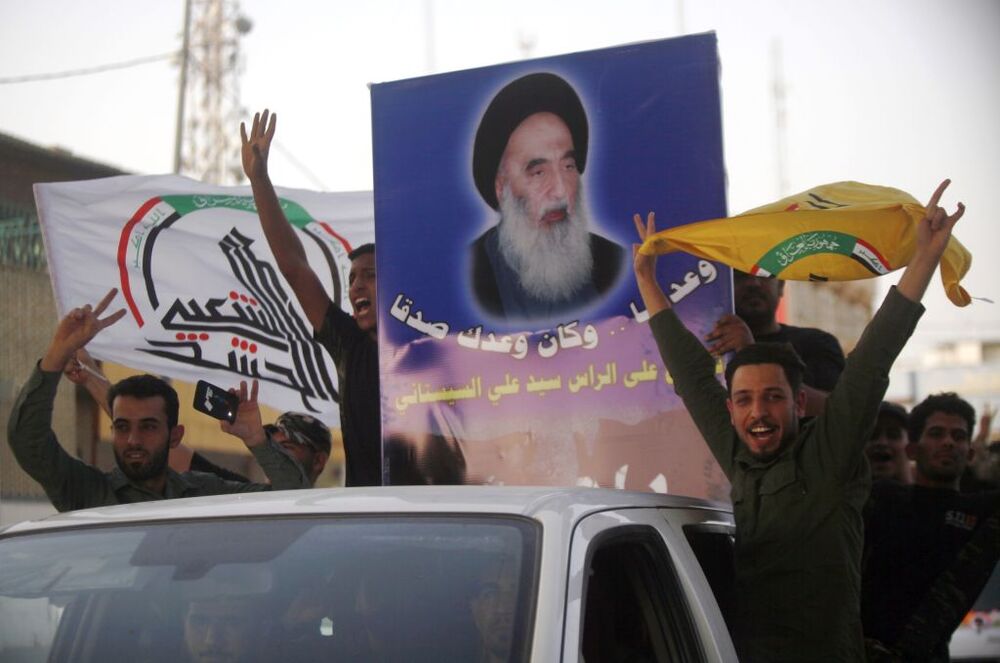 It took five months since Iraq’s national elections, but the country finally has a new prime minister, Adel Abdul Mahdi. In truth, however, neither he nor new President Barham Salih nor the firebrand cleric Moqtada al-Sadr, whose alliance won the most parliamentary seats in May, will likely have the greatest influence over whether Iraq can make the reforms necessary to become a stable and prosperous country.

Rather, the key figure is Grand Ayatollah Ali al-Sistani, the 88-year-old senior cleric in Iraq’s Shiite religious hierarchy. While Sistani has followed the Shiite tradition of generally staying away from a direct role in politics, he engaged in backroom negotiations for months to bring together the contentious factions that eventually reached a compromise on Abdul Mahdi, an economist and former vice president.

Sistani’s position at the pinnacle of the political pyramid is unprecedented for an Iraqi cleric. Throughout the history of Shiism — until the 1979 revolution that led to the creation of an Islamic theocracy in Iran — religious leaders refused to assert themselves directly into affairs of the state.

It was Ayatollah Ruhollah Khomeini, leader of the Iranian revolt, who radicalized the role of senior clerics with his concept of velayat e-faqih, literally “guardian of the Islamic jurist.” Khomeini’s rationalization for entering politics was based upon the idea that as representatives on earth of the Hidden Imam — also known as the Mahdi — clerics, namely himself, were to take absolute political power over all believers.

Sistani, an Iranian citizen, opposes this idea of the velayat because he believes it leads to dictatorship, Iran being the perfect example. But he has departed from his traditional nonpolitical position because he understands the Iraqi state is currently weak, caught in partisan struggle and vulnerable to Iran’s strategic ambitions.

He is said to be very concerned that Iran has played an increasingly greater role in Iraq since the U.S. withdrew most of its forces in 2011. This is not to say that Iraq’s most powerful cleric is always allied with, or subservient to, American interests. He is, first and foremost, a nationalist.

Clerical sources in the Shiite holy city of Najaf tell me it is only out of “necessity” — what is known as maslahat in Islam — that Sistani is now playing this prominent role in government. Khomeini used the same concept when he declared himself the ultimate leader of Iran, less than a year after he re-entered Iran from exile to lead the revolution.

But there is an important distinction between the ways the two men have interpreted maslahat. Sistani sees it as a social and moral imperative to uphold the general welfare, what in Arabic is called al-hisbah, and requires one in a position of authority to intervene to “enjoin good and forbid wrongdoing.” Khomeini, on the other hand, did not distinguish between the public’s welfare and that of the state.

Sistani derives his influence not by appointment — like Iran’s supreme leader, Ali Khamenei — but by being a model whom Shiite Muslims can emulate. This gives him sway over his followers’ daily lives not only in Iraq but across the region. While this is the first time he has used this influence directly in partisan politics, he has previously asserted his authority to help the nation. He was outspoken in urging Iraqis to fight against the Islamic State, and he has on occasion served as a neutralizer between Iran and the U.S. As a result, he has been at odds with Sadr, who in the past had his followers fight U.S. troops and believed the U.S. should depart from the country.

By expanding his role beyond the realm of religion to include issues such as maintaining public order, Sistani could be charting a new and lasting course for the Iraqi clerical establishment, known as the marjiyya. The big questions are whether he can continue to fulfill this broader role, and whether after his death more clerics will emerge who will be able to exercise similar influence.

In either case, Iraqis should wish for Sistani’s interventions to continue, because above all he is a compromiser. Not only did his strong hand help break the stalemate in forming the new government, but also resulted in Salih becoming president. The Kurdish leader has a reputation as a peacemaker and is a darling of Washington. (Abdul Mahdi, a technocrat a heart, is thought to be more neutral in the competition between the U.S. and Iran.)

Sistani’s role in all this showed political acumen. Initially, he issued a directive saying that no politician who had served in office in the past should be allowed to take the prime ministership. But, according to Sistani’s son Mohammad Reza, Abdul Mahdi was exempted from this restriction because he had resigned from his most recent position as Iraq’s oil minister before he completed his term.

In promoting Abdul Mahdi, Sistani was able to remove from contention two other candidates who are heavily under Iranian influence: Nouri al-Maliki, who held the premiership from 2006 to 2014, and Hadi Ameri, a militia leader whose coalition grabbed the second-most parliamentary seats in May. Sistani even used one of his Friday prayer sermons to indirectly criticize Maliki, telling Iraqis to “avoid falling into the trap of those … who are corrupt and those who have failed.”

Sistani and other top clerics believe Iran wields far too much influence in Iraq, and have worked for years to limit Tehran’s sway. “There is a desire among the marjiyya and the public to have a new government of true national unity,” Jawad al-Khoie, a religious scholar and professor in Najaf, told me. But like many in Iraq, the Shiite religious establishment fears outside interference. “The interventions and pressures may not allow this to happen,” al-Khoie said.

Sistani’s role as power broker is a good thing for Iraqis as they try to move away from their sectarian identities and toward a more nationalistic identity. Yes, the government still suffers from corruption, economic mismanagement and political polarization, and it will take strong secular leadership to create the stability Sistani is seeking. The question is whether such progress will be made during the ayatollah’s lifetime.

Geneive Abdo is a resident scholar at the Arabia Foundation and the author of four books, most recently “The New Sectarianism: The Arab Uprisings and the Rebirth of the Shi’a–Sunni Divide.”

BAGHDAD / The deputy of the coalition of “construction” Amer al-Fayez, Monday, that Wednesday or Thursday is the deadline for President-designate Adel Abdul-Mahdi and the announcement of his new cabinet.

Al-Fayez told Iraq News that “the end of this week will be the deadline for Abdul-Mahdi in announcing his new ministries with the names of the ministers,” noting that “some parties have learned in one way or another that they will not get what is known as their own quotas and started with attempts To delay the date of the announcement of the government and submitted to Parliament. “

“The security ministries, including the interior and defense, will announce their ministers and I do not think that the parliament will agree to cost and remain within the work of Abdul Mahdi,” he said, adding, “Abdul Mahdi and during a series of dialogues said he is committed to the constitutional timing and will not ask for extension, Within his powers. “

The media office of the Prime Minister-designate, announced last week, the intention of Adel Abdul-Mahdi, to present his ministerial cabinet with the ministerial platform this week, pointing out that Abdul Mahdi is required contacts with the Presidency of Parliament and leaders of the political blocs to determine the appropriate day to submit the names of its ministerial formation.

Abdul Mahdi had launched a website for the nomination of ministries, which lasted for 48 hours, and closed the site on Thursday afternoon (October 11).

Reuters) – Prime Minister-designate Adel Abdul-Mahdi has sent the curricula vitae of the candidates to the House of Representatives, and is expected to be held on Tuesday, a political source said.

The source told “Al-Ghad Press” that “the Prime Minister-designate, Adel Abdul-Mahdi, sent the CVs of candidates for the Cabinet Cab to the House of Representatives to see it 24 hours before the voting session on the cabin.”

The source added that “there are objections by the political blocs on the candidates and specifically Sunni forces.”

The source preferred “hold a vote on the ministers next Tuesday amid disagreements over candidates.”

The media office of the Prime Minister-designate, Adel Abdul-Mahdi, announced last week that Abdul Mahdi will submit his cabin to parliament within days, while sources revealed differences between the political blocs on ministerial posts.

ERBIL — The incoming prime minister of Iraq, Adil Abdul-Mahdi, is expected to announce the line-up of his new cabinet on Wednesday this week, a media source said.

The list of suggested ministers would be presented at the parliament for legislative’s vote, according to Shafaq News. However, it will only consist of 15 ministers.

Reports revealed that the main ministries of oil, finance, interior affairs, foreign affairs, planning, and defense would be finalized later as political factions have not yet reached an agreement on who will be appointed to the positions.

It is claimed that Abdul-Mahdi’s cabinet will at least have 11 to 13 ministers without political affiliation to a certain political party, what the cabinet insists to name as “technocrats”.

The Central Bank of Iraq (CBE), on Monday, informed all Iraqi banks of the new issue of Swiss francs 200.

The bank said in a statement received “The Economist News” a copy of it, “The Swiss National Bank put into circulation the new issue of the cash sheet category 200 francs, the fourth category of the ninth series,” noting that “the remaining categories are expected to be put into circulation after this issue to 2019 goal in a sequential way “.

“The rest of the other old categories of the eighth issue in circulation and legal offer until further notice, while the SNB will announce its withdrawal from circulation at the time.”

The Central Bank called on all banks to inform their employees who are working in the field of foreign exchange with the new issuance of the Swiss National Bank for this new issue.