Shafaq News / Revealed a leader in the Alliance of Reform and Reconstruction, on Wednesday, the existence of mobility within the coalition with the aim of nominating the outgoing Prime Minister Haider Abadi, first deputy to the new Prime Minister Adel Abdul Mahdi.
The leader, told Ashqaf News, who asked not to mention his name that “there are movements and calls for the goal of nominating Abadi first deputy prime minister, so that it has a bond and aid, especially because of the experiences in the field of his work over the past years, according to the views of some political forces Reform alliance “.
The leader of the reform alliance that “this movement did not come out to the public and was not raised formally, it is under discussion between the political forces within the coalition, after the final agreement, will be put formally, and the disagreement means not to nominate Abadi to this position, and perhaps to other positions Also”.
It is noteworthy that Abadi issued in the summer of 2015 decisions that abolished the posts of Vice-President of the Republic and the Prime Minister, as part of a series of reforms announced by the government after demonstrations in the country in protest against corruption and lack of public services.

(Baghdad: al-Furat News) Prime Minister Haider al-Abadi received in his office on Wednesday the head of the Kurdistan Regional Government Nigervan Barzani.
“The meeting discussed the political, security and economic situation in the country and the coordination between the center and the region to strengthen joint cooperation and continue to pursue terrorist cells,” a statement from the al-Abadi office said.
The two sides stressed that “dialogue and dialogue within the framework of the Constitution can resolve the outstanding issues in order to serve the country.”
http://alforatnews.com/modules/news/article.php?storytopic=36&storyid=177773

During the meeting, they discussed the political, security and economic situation in the country and coordination between the center and the region to enhance joint cooperation and continue to pursue terrorist cells.

It was stressed that dialogue and dialogue within the framework of the Constitution can resolve the outstanding issues in order to serve the country.

The official Iraqi newspaper al-Iraqiya published on Wednesday the decrees appointing Barham Ahmed Saleh as president of the Republic of Iraq, and the transfer of former president Fuad Masum and his three deputies to retirement.

The Ministry of Justice issued the new issue of the Iraqi Gazette No. (4512), which included several decrees Republic approved by the House of Representatives and ratified by the Presidency of the Republic.

Director General of the Department, Hind Abdul Jamig, said that the number included Republican Decree No. 71 of 2018 appointing Barham Ahmed Saleh as President of the Republic of Iraq, in addition to Presidential Decree No. (72) of 2018 (referring Mohamed Fuad Masoum Khader, former President of Iraq) . 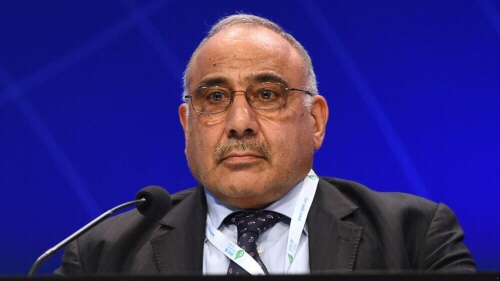 (Baghdad: Al Furat News) Speaker of the House of Representatives Mohammed Salman al-Tai, said that the Prime Minister in charge of Adel Abdul-Mahdi, in the last step to form his cabinet and announce its announcement.

“The time is still not embarrassing in front of Abdul Mahdi, which is the number of his cabinet and the mechanism of distribution of ministries and is now looking to nominate candidates for the receipt of these bags,” he said, pointing out that “the House of Representatives will be firm in front of the next government will not give the full opportunity if Did not achieve achievements. ”

He pointed out that “Abdul Mahdi did not face what his predecessors faced and has the support of the religious authority and political blocs and the street and all the conditions for him to form a comfortable cabinet and even pressures in the backstage and scenes are not the pressure exerted on the former prime ministers so conditions are fully prepared for him to form a government.

“The majority of the political blocs have representatives in the House of Representatives and believes that their presence in the government can provide something to its disgruntled audience and the next prime minister to take into account this matter and go to form a government that takes into account the representation of everyone and choose one of the candidates of the blocs and in accordance with his conditions, And the masses of the blocks. ”

“He is likely to make a balance between the candidates of the blocs and the electronic window, which is free, but from the constitutional point of view it is possible to present an incomplete ministerial cabin and leave another for another time, and the time limit for the commission may end up not agreeing on a ministry or two ministries.”

“The circumstances surrounding the formation of the government is still acceptable and there are no intersections between the taxpayer and the blocs and some problems may arise, but the general situation is positive for Abdul Mahdi, and if he did not submit his booth to the House of Representatives in the last week of his constitutional period we can say that Henk obstacles and problems may loom large after the formation of the government. ”

He pointed out that “90% of the current House of Representatives are young and this means that the supervision will be strict and the government to warn of these young people,” noting that “the new ministers to prove their efficiency management and performance in the first months, it will protect the government from any future questioning in parliament “He said.

He added that “the era of conflicts is over and the atmosphere of understandings and objections to the formation of the government will be serious.”

He added that “the previous accusations were to impose wills and today there is no such thing and Abdul Mahdi is acceptable to all and will continue these understandings throughout the life of this government to the existence of a political balance between reform and construction in the House of Representatives, which did not happen in the last parliamentary sessions.”