The United States has announced its support for religious minorities in Iraq for $ 178 million as part of its foreign assistance programs, raising the total US aid to vulnerable communities in Iraq, as it called it to $ 300 million since fiscal year 2017, American Development Agency.

In a press release from the State Department yesterday, the ministry said preserving Iraq’s rich historical pluralism was crucial to the reintegration of Iraq’s ethnic and religious minorities into a peaceful society: “So the US efforts come to meet this goal and extend across government agencies. And in close partnership with community leaders. “

In response to immediate needs, more than $ 51 million has been disbursed in humanitarian aid to the lives of residents in Nineveh Plain and western Nineveh areas, including safe drinking water, food, shelter materials, household items, medical care and psychosocial support. Assistance in community recovery, such as funding of $ 9 million to support early recovery needs, and to restore access to services such as health and education.

It has also contributed to the economic recovery by funding $ 68 million to improve access to jobs and markets, support local businesses and revitalize the local economy, as well as $ 5 million to address methodological issues affecting minorities and prevent future rivalries.

In terms of clearance of ERW, total support amounted to approximately $ 37 million in support of the ERW survey, mine clearance and risk education in and around minority communities.This support has enabled the Department to increase the number of ERW ERs and US-funded risk awareness.

In the area of ​​social, economic and political empowerment, the United States provided $ 8.5 million in additional assistance to projects providing psychosocial services, legal support and initiatives to help collect evidence of human rights violations, increase minority representation in local and regional government, increase access to justice for children, The rule of law, and support for livelihoods and access to economic opportunities for vulnerable groups, totaling $ 18.5 million in 2017.It also contributed to the preservation of historic and cultural heritage sites by supporting $ 2 million in ongoing programs to support the preservation of cultural heritage sites in northern Iraq, targeted at their destruction by the Da’ash organization and other terrorist groups, and restoring access to important cultural heritage sites from communities Minorities.

Baghdad / .. The outgoing Prime Minister, Haider Abadi, on Tuesday, directed his ministers to hand over their bags in full to the next government.

“His current government has full constitutional powers,” Abadi said during his weekly press conference held at the government palace in central Baghdad. “He directed his ministers to hand over their bags in full to the next government.”

“It is his government’s duty to submit the fiscal budget for 2019, on time.”

Iraq News Now
19:13
Baghdad / Al-Ghad Press:
Former Speaker of the House of Representatives Saleem al-Jubouri discussed with the representative of the UN Secretary-General in Iraq Jan Kubic Tuesday the formation of the government and the latest political developments.

“Jubouri met with the representative of the Secretary-General of the United Nations in Iraq, Jan Kubic, and discussed the latest developments and events on the political arena and ongoing dialogues between the blocks in order to speed up the resolution of the Cabinet Cab file.”

“People should be chosen for their minister based on their competence, integrity and good performance,” Jubouri said.

He stressed “the importance of taking into account the representation of all components of the Iraqi spectrum without marginalization or exclusion.”

(Baghdad: al-Furat News) Said MP for the construction block Hamid al-Musawi, the Prime Minister in charge of Adel Abdul-Mahdi, will present his cabinet full cabinet in parliament on Saturday.
“What is happening today in the formation of the government, which was assigned to Abdul-Mahdi and the political movement led by the blocks that cost him the position, we find that there is political pressure exercised on him whenever the constitutional times approached to announce the government.”
He added, “Maarha reconstruction and construction has not objected to one and so far did not hear from any block that has certain conditions,” pointing out that “the next government is the sixth government after 2003, which differ significantly in terms of circumstances and even the blocks and the House of Representatives as there are more than A view towards this government, including the supreme authority. ”
He said that “Abdul-Mahdi put forward a program in agreement with the coalition of reform and construction and agreed to by the political blocs and any offering of benefits means a breach of the agreement and there is betting on the failure of the government and not held in a constitutional time.”
“The government will announce on Saturday next and this is confirmed by the leaders of the blocks and there will be a complete cabin is not like the previous sessions,” pointing out that “the House will vote on the cab with great conviction even if the leaders of the blocks on the deputies decision to abstain.”
http://alforatnews.com/modules/news/article.php?storytopic=36&storyid=177729

The Cabinet held its ordinary session on Tuesday under the chairmanship of Prime Minister Haider Abadi, and discussed the draft federal budget law for the Republic of Iraq for fiscal year 2019 was presented projects and financial allocations to ministries and was discussed in detail and vote on them.

It was voted on the exception of printing and processing the exam book for the sixth grade of the Council of Ministers Decision No. 272 of 2015 on the printing and implementation of government publications.

The Council voted on the National Strategy for the Prevention and Control of Non-Transitional Diseases for the years (2018-2022).

The session witnessed the vote on the adoption of the recommendations of the Committee of Diwan No. 20 of 2017 on negotiating with the Egyptian side on the ship Agnadin anchored at the port of Alexandria and determine its fate.

The decision to approve the recommendations of the Diwan Commission No. 45 of 2016 was approved by the Committee for the Coordination and Management of Government Activity towards Electronic Governance on the Secured Government Network.

The Council of Ministers also voted to allocate a sum of 500 million dinars to the Air Force Club for participating in the AFC final in Basra.

Revealed a member of the House of Representatives Siham al-Aqili, on Tuesday, the parliament’s intention to hold a special session next Sunday, during which Prime Minister-designate Adel Abdul-Mahdi half of the ministry to vote on it and give them confidence to ensure that the constitutional durations are not exceeded.

“The confirmed news that the Prime Minister-designate Adel Abdul-Mahdi completed half his cabinet and intends to submit to parliament before the end of the constitutional period to complete the rest of the ministerial portfolios in the coming days.”

She added that “the names will be submitted to a special session on Sunday to give them confidence by the House of Representatives,” noting that “the names that will be provided will receive confidence without embarrassment as a large support to him by the conquest and others.”

The House of Representatives announced on Monday, raising its regular session to another notice.Finished 25 and

Shafak News / Prime Minister Haider Abadi on Tuesday to determine the price of selling barrels of crude oil in the federal budget for the next year to $ 56 US.

He added that the government’s duty to submit the federal budget on time, with the adoption of $ 56 per barrel of crude oil, “saying that” the current government continues full constitutional authority in the face of terrorism. “ 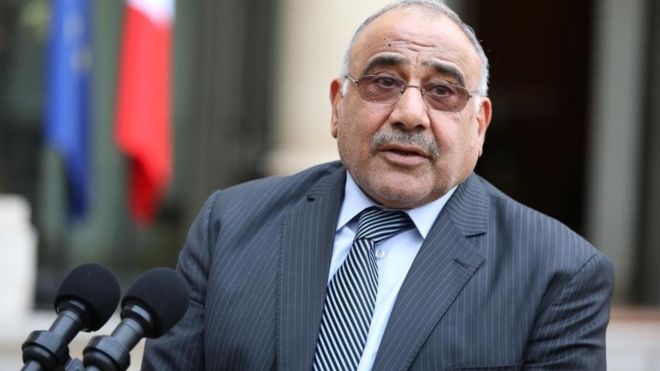 BAGHDAD (Reuters) –
Prime Minister-designate Adel Abdul-Mahdi will present his Cabinet on Thursday or Saturday, a parliamentary source said on Tuesday.
The source said, for / Mawazin News /, that “will be invited all the deputies to attend the parliamentary session and review of the Cabinet Cab a day before the meeting.”
“There is a desire to vote on the whole government before the 40th visit,” he said.
“The curriculum vitae of the candidates will be sent to all the deputies to be consulted,” he said. Finished 29 / d

(Baghdad: al-Furat News) said MP from the Kurdistan Democratic Party, Mohsen al-Saadoun that “the team of Prime Minister-designate Adel Abdul-Mahdi is engaged in intensive dialogues with the political blocs before the Chuxil government.”
Al-Sadoun told the {Euphrates News} that “the constitutional deadline is clear and ends on the second of next October, which necessitates the Prime Minister-designate Adel Abdul-Mahdi resolve the file of forming the government within the next ten days, and if not resolved a matter is formed another figure.”
He pointed out that “the situation is difficult for the existence of time and constitutional entitlement,” pointing to “the existence of dialogues and intensive talks with the team of Abdul-Mahdi and the political blocs to form a government within the constitutional period next week.”
He added that “the process of forming the government was not easy, because of the experiences of Iraq and major crises in previous governments that did not give a positive result for the Iraqi people, who has become the observer at the moment.”
He stressed the need to “give space for the choice of the Prime Minister of the mandate, and must take into account the electoral entitlements and the selection of figures known Secretariat and administrative work and honesty, and these considerations must be respected to achieve a government able to meet the challenges during the next phase.”
It is hoped that the prime minister-designate will provide his ministerial cabinet within 72 hours, while the speaker of the House of Representatives Mohammed al-Halbusi is likely to be the next meeting to form the government.
http://alforatnews.com/modules/news/article.php?storytopic=36&storyid=177706

The head of the coalition of state law, Nuri al-Maliki, on Tuesday, during a meeting with the official file on Iraq and Iran in Washington, that Iraq seeks to establish the best relations with countries in the world.

“The head of a coalition of state law, Nuri al-Maliki, received today, in his office, the official of the file on Iraq and Iran in the outside of the United States of America Andrew Beck, in the presence of Ambassador Douglas Silliaman,” Maliki’s media office said in a statement.

He added that “the two sides reviewed the future of bilateral relations between the two countries and means of enhancing them, and exchanged views on the latest developments and developments in the region, in addition to ongoing dialogues to form the next government.”

Maliki said, according to the statement, that “the stability and security of the region as a whole starts from the stability of Iraq,” stressing the “importance of supporting the next government and its success in achieving the aspirations of the Iraqi people.”

“Iraq seeks to establish the best relations with various countries of the world and rejects the axes policy. It is in Iraq’s interest to be a forum for bringing together different points of view, again the rejection of the principle of sanctions against Iran or any other country.