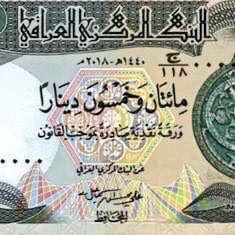 {Baghdad: Al-Furat News} Economic expert Louay Khatib called for the destruction of the new currency and correcting its grave error.

“The Central Bank of Iraq issued a statement on the new version of the Iraqi currency signed the name of Acting Governor Ali Mohsen Ismail in a dangerous precedent and a violation of all contexts universally recognized and Iraqi, except dictatorships,” Khatib said on the site of social access (FIBSOC) today.

Khatib said, “So as an Iraqi citizen, I request that the signature of the Iraqi currency by the Minister of Finance by the title without mentioning the name, and the withdrawal and destruction of this new version and correct this grave error.”

He called on all Iraqi people “to participate in this corrective action to be the beginning of the reform process in all aspects of government work and its contexts.”