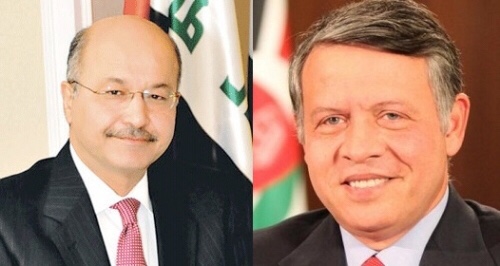 The Jordanian monarch confirmed the country’s readiness to develop and expand close cooperation in all fields, including serving the two brotherly peoples in parallel with continuing coordination and consultation at the regional and international levels.

For his part, President Barham Salih expressed his “deep thanks to His Majesty King Abdullah II”, stressing “his personal interest in more distinguished and strategic relations between the two countries.”

He also referred to the importance of enhancing economic cooperation through the joint committee between the two countries. He also welcomed Jordan’s role in the reconstruction and agriculture projects, while encouraging Jordanian companies to invest in new production projects.