PM Abadi led #Iraq out of its darkest period and near collapse 4 years ago. Tonight, he congratulated his successor, Dr. Adil Abd al-Mahdi. We are forever grateful for PM Abadi’s steadfast leadership that rallied our @coalition to help Iraq defeat #ISIS.

Honored to congratulate newly elected President of #Iraq Dr. Barham Salih tonight in #Baghdad shortly before he spoke with Secretary Pompeo. President Salih has a big job and he can count on the United States as a partner. @SecPompeo @BarhamSalih @StateDept 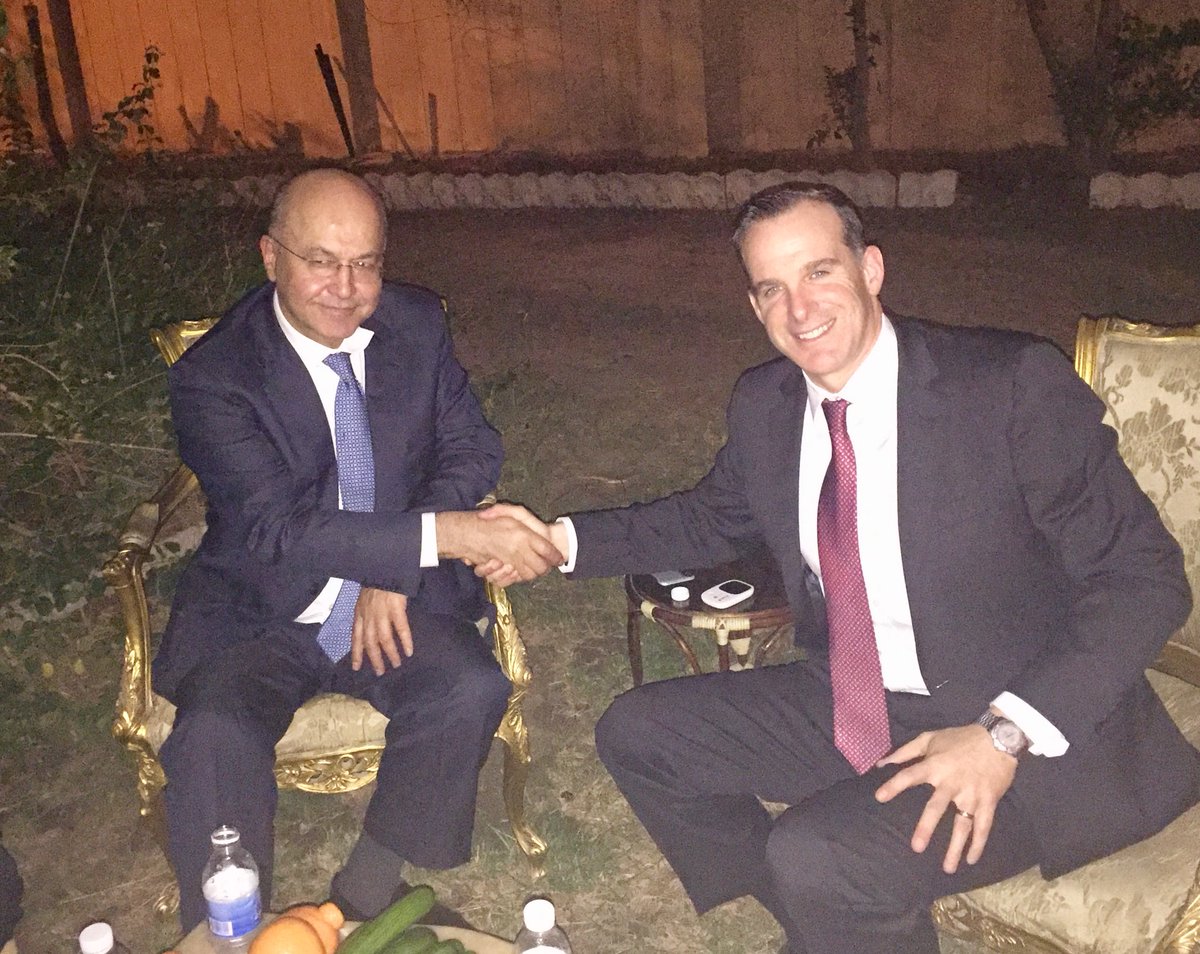 Abadi said, according to a statement of his office received the agency {Euphrates News} a copy of him, addressing Abdul Mahdi, “Congratulations on the occasion of your task to form a new government and wish you success in its formation and choose who is best to fill the government positions to provide the best services to citizens, asking the Almighty to take the hands of the people of Iraq and its people Preserving its security and well-being. ”

The House of Representatives, was elected on Tuesday evening, Barham Ahmed Saleh President of the Republic, replacing Fuad Masum.

(Baghdad: Al-Furat News) The member of the National Wisdom Movement, Fadi Shammari, assigned Adel Abdul Mahdi, to form the next government.
Al-Shammari said in a statement received by the agency {Euphrates News} a copy of it “was presented two papers, the first of the Alliance of Reform and Reconstruction, and where signatures of the forces of the nomination of Abdul Mahdi, the second coalition building and the signatures of political forces to nominate Abdul Mahdi,” noting that ” The largest without mentioning its name. ”
He pointed out that “there is a third joint paper from the two alliances.”
The President of the Republic Barham Saleh – the elected Tuesday – has assigned Adel Abdul Mahdi to form the next government
http://alforatnews.com/modules/news/article.php?storytopic=36&storyid=176395

According to a document obtained by “Al-Ghad Press”, we are a coalition of construction as the largest bloc of our candidate for Prime Minister Adel Abdul Mahdi, so please ask him to form a government based on the provisions of Article 76 / First Constitution.

Congratulations and best of success to @AdilAbdAlMahdi as he starts to form the new government of #Iraq. The #USA will work with the future PM to help his government meet the needs and aspirations of all the people of Iraq. @USEmbBaghdad @USAConsulBasrah @USConGenErbil 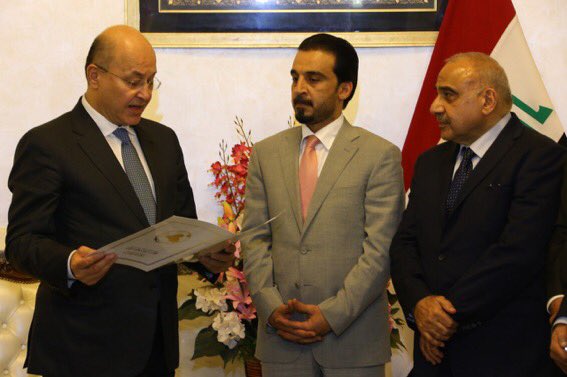 Shafiq News Adel Abdul Mahdi Al-Muntafi is an Iraqi politician born in Baghdad in 1942. His father held a ministerial position during the reign of King Faisal I in the 1920s.

He has held the position of President of the French Institute for Islamic Studies and has edited several magazines in Arabic and French.

He belonged to the Baath party and then to Maoist communism (while in France) and then joined the Shiite Islamic movement after the Iranian revolution.

He was a leader in the Supreme Council for the Islamic Revolution in Iraq (SCIRI) and its representative in many forums.

Adel Abdul Mahdi joined the Baath Party at the beginning of his youth when the party was in its early years of establishment and had a well-known connection to Iraqi President Saddam Hussein.

He was influenced by nationalist Arab and socialist ideas, but left the Baath Party in 1963, was imprisoned and sentenced to death in the 1960s.

He worked since the early 1980s with Muhammad Baqir al-Hakim and the Supreme Council for the Islamic Revolution in Iraq (SCIRI), which he was a leader in, and in many countries and events.

Returned to Iraq after the fall of the regime of former President Saddam Hussein, and became an alternate member of Abdul Aziz al-Hakim in the Governing Council in the stage of “authority of civil administration,” and then served as Minister of Finance in the government of Iyad Allawi in 2004, a representative of the Supreme Council of the Islamic Revolution, US negotiations on the cancellation of Iraqi foreign debt, and persuaded a number of international donors to drop a large part of them.

He became one of the two Iraqi vice-presidents in 2005, after he was a candidate for prime minister before giving in favor of Ibrahim al-Jaafari.

Contributed to the drafting of the new Iraqi constitution.

The last post taken by Abdul Mahdi was the Ministry of Oil, which he resigned in March 2016.

Brett McGurk congratulated US President Donald Trump’s envoy, Barham Salih, on his victory in the presidency, in what he called the “old friend.”

“We congratulate Barham Salih, our old friend, for his new election as President of the Republic of Iraq,” McGourke said in a tweet via Twitter.

He added: “We urge the completion of the process of forming a national government, and we hope that President Saleh will succeed in serving the entire Iraqi people.”

Earlier on Tuesday (October 02, 2018), the House of Representatives voted to select the candidate of the Patriotic Union of Kurdistan Barham Salih as President of the Republic of Iraq.

A parliamentary source told (Baghdad Today), “The House of Representatives, voted during the second round of the voting process, the selection of Barham Saleh President of the Republic, winning a majority of votes.”

A leader of the Kurdistan Democratic Party (KDP), Massoud Barzani, said earlier Tuesday that what took place in the presidential election was a “reward” offered by the Shiite parties to the faction led by Pavel Talabani in the Patriotic Union to “hand over” Kirkuk to the popular crowd.

The Kurdistan Democratic Party, led by Massoud Barzani, announced earlier Tuesday, the withdrawal of its candidate for President of the Republic Fouad Hussein, before submitting a formal request to the presidency of the parliament, rejected by the latter.

The House of Representatives began on Tuesday, the voting session for the election of the President of the Republic.