ERBIL — The Special Representative of the United Nations Secretary-General for Iraq, Jan Kubis, met with influential Kurdish leader masoud Barzani on Monday in Erbil to discuss the political development, including Kurdistan’s parliamentary election a day earlier.

According to a readout issued on Barzani’s website, Kubis hailed the election process and described it as “successful”.

He also pointed out that the Sunday’s election would help strengthening democratic principles in the Kurdistan Region.

The fifth round of parliamentary election was held on 30 September. The process was observed by UN representatives, foreign NGOs, consulates and representatives from the local political parties.

Shafaq News / revealed a source familiar with, on Monday, the postponement of the session of the Iraqi Council of Representatives, for the selection of the President of the Republic.

The source told Ashqaf News that “the special session for the election of the President of the Republic was postponed until Tuesday, because of the lack of quorum for them, which requires the presence of 220 deputies to achieve a quorum.”

He added that “the total presence within the parliament is 159 deputies, so the meeting was postponed until Tuesday.”

Parliament Speaker Mohamed Halboussi postponed the session on Monday for half an hour because of a quorum.

A crucial session of the presidential election was attended by only 159 deputies out of 329 deputies.

According to a parliamentary source, the deputies of the Democratic Party and a coalition of construction and members of the year did not enter the meeting yet.

Halabousi decided to postpone the meeting for half an hour until the completion of the number of the meeting, requiring a vote on the President two thirds of the members, or 220 deputies.

BAGHDAD / An informed source revealed on Monday intensive dialogues are under way in Baghdad between the Kurdistan Democratic Party and the Patriotic Union of Kurdistan to resolve the issue of choosing the new president.

The source said, “the eye of Iraq News,” that “a political force of the coalition of construction and reform intervened as mediators between the two parties Barzani and Talabani with a view to unify the Kurdish position on the nomination of the new president.”

The source, who asked not to be named, said that “the political forces postponed the session of the election of the President of the Republic to 8 pm, to give the Kurds a long time to negotiate,” expected “not to enter the Kurds one candidate to the dome of the House of Representatives, the intensity of disagreement.”

It is scheduled to witness the session of the House of Representatives to be held on Monday evening, the vote on the President of the Republic

A spokesman for the Kurdistan Regional Government, on Monday, not to disrupt the official working hours on October 3.
Sven Dzai said in a statement that Wednesday, October 3, 2018 will be an official holiday in all official departments and institutions in Iraq on the occasion of the National Day.
He added that the Federal Council of Ministers decides every year that day an official holiday in all Iraqi provinces, adding that the Kurdistan Region has not declared that day a holiday in all previous years.
Iraq officially left Britain on October 3, 1932. 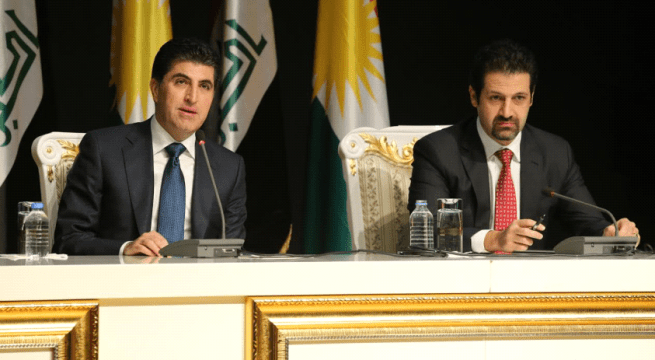 Private – Mawazine News
Revealed a deputy for the Alliance of Saron, on Monday, a meeting between the Kurdistan Regional Government President Nizrvan Barzani and leader of the Patriotic Union Qubad Talabani to agree on a single candidate for the presidency.
“He said in an interview with Al-Mawazin News that” according to news received by us, he is currently holding a meeting between Najran Barzani and Qubad Talabani to agree on a compromise candidate for the presidency. “
“He added that” the alliance of others waiting for agreement Kurds on their candidate and then decide the mechanism of voting. “
It is noteworthy that the Kurdistan Democratic Party nominated Fouad Hussein for the post of President of the Republic, while the Union nominated Barham Saleh and has been in negotiations for days to come out a candidate consensual between them.

ERBIL — Kurdistan Region Prime Minister Nechirvan Barzani, who is also the vice president of the Kurdistan Democratic Party (KDP), is heading to Baghdad amid the talks over competitions for Iraqi president position.

According to the information obtained by BasNews, Barzani is scheduled to arrive in Baghdad on Monday before the Iraqi parliament holds a session to elect the next Iraqi president.

The parliamentary session is set for 20:00 (Baghdad time).

BasNews has learned that Barzani will hold discussions with the Iraqi political blocs on his party’s candidate for presidency, Fuad Hussein.

A senior delegation from the Kurdistan Democratic Party (KDP) on Monday went to Baghdad to support its candidate Fuad Hussein for the post of president of the republic.

According to the leaks, the Democratic insists on the need to resolve the Kurdish blocs first candidate of the President of the Republic as the position of the maturity of the Kurds as the forces is the case with the forces and political parties Shiite in Iraq in the formation of the largest bloc and the choice of a Council of Ministers so it is necessary to resolve the Kurds themselves the presidency of the Republic and not Others.

The leaks indicate that with the higher chances of Fouad Kurdistan Democratic candidate for the post mentioned and increase the likelihood of gaining the confidence of parliament, but the Kurdistan Democratic Party believes it is better to identify the Kurdish parties a personality to take the post of President of the Republic.

The candidate of the Democratic Party of Kurdistan for the post of President of the Republic of Iraq on Monday to obtain the confidence of the Iraqi Council of Representatives for the post mentioned, indicating that whether the voting mechanism between the Kurdish blocs or within the Iraqi parliament, he will win the majority of the votes.

Hussein said in a statement to Radio Voice of America in Kurdish, that “during the past few days met almost all Iraqi political leaders, and most of them expressed their support for him,” noting that “most of these leaders said that the job must be resolved by Kurdish mechanism within the Kurds themselves, This is because they are the solution. ”

He added that “the Kurdistan Democratic Party and the brotherhood of Massoud Barzani insist on the mechanism to determine the candidate for the post,” saying that “our dialogue and talks with the Kurdistan Islamic Union, the Islamic Group and the Patriotic Union of Kurdistan is also informed as we move forward and we will succeed.”

On the dialogue with the National Union to provide a single candidate, Hussein said that “there is a possibility of withdrawal, and I hope that, and then we will conclude an agreement between us to have a share of other positions in the next Iraqi government.”

For his part, the First Deputy Speaker of the House of Representatives Hassan al-Kaabi said on Monday that the Council will maintain the constitutional timing in the process of choosing a president of Iraq.

He also said in a statement during a meeting with former Speaker of the House of Representatives Salim al-Jubouri that “the constitutional timing will not be exceeded on the issue of the election of the President of the Republic,” saying that “we will seek to complete it on the specified constitutional date.”

Is scheduled to hold the Iraqi Council of Representatives this evening to a session to choose one of the candidates for the presidency of the Republic of Iraq.

The 329 MPs elected last May have a choice of candidates. Among the most prominent candidates for the succession are Fuad Masum, a member of the Patriotic Union of Kurdistan, his party colleague Barham Salih and Fuad Hussein of the Kurdistan Democratic Party.

The two major Kurdish parties have been in fierce competition for the post, which has been occupied by the Patriotic Union of Kurdistan since 2005, when the late party founder Jalal Talabani was elected.

Therefore, this is the first time that the Democratic Party of Kurdistan, a candidate for the Iraqi presidential elections, considering that the previous agreement has become a canceled, and is no longer the monopoly of a particular party, especially that the largest Kurdish bloc in parliament.

The two leading candidates have been in Baghdad for a few days, meeting leaders and leaders of Sunni and Shi’ite blocs to get their vote.

According to the Iraqi constitution, it is assumed that the president will be elected before next Wednesday, and requires that the candidate get two-thirds of the votes of deputies.

If the President of the Republic is not elected on Monday, the meeting will be adjourned to the next day and will remain open until the election of a President.

Twilight Alliance / Alliance of Suron, backed by the leader of the Sadrist movement Moqtada al-Sadr, on Monday, his final position on candidates for the presidency of the Republic of Iraq.

The spokesman for the Mass of Asoon Hamdallah Rikabi, told Ashqaf News “to this moment we expect to be a unified position of the Kurdish forces and to submit one candidate for the presidency, as it has been doing for the past years, especially since the meeting will be evening, and this means there is a time and opportunity to unite the Kurdish position “He said.

Rikabi said that “if the Kurdish forces did not submit one candidate for the presidency of the Republic during the parliamentary session will be for each incident and then we will decide which candidate we support, but repeat we are still waiting for the Kurds to come one candidate to the meeting.”

The Iraqi parliament is holding at 8 pm on Monday, a decisive session for the election of the President of the Republic in light of the competition of more than one candidate for the post allocated to the Kurds according to the political knowledge of the country, because of the failure of the Kurdish forces to one candidate.

And competing for the presidency of Iraq, 24 candidates, most notably the candidates of the two main Kurdish parties, where the Democratic Party nominated Fouad Hussein, while the National Union announced that Barham Saleh was his only candidate.

President of the Republic Fuad Masum met at the Peace Palace in Baghdad with US Special Envoy Donald Trump to Iraq, Brett McGurk and his accompanying delegation, which also included US Ambassador to Iraq Douglas Silliman.

The meeting reviewed ways to enhance cooperation between the two countries as well as the overall political and security developments in Iraq and the region.

During the meeting, Masoum expressed his appreciation for the continued support of the United States in various fields.

For his part, Brett MacGork confirmed the country’s support for the Iraqi people, reiterating the desire of the United States to develop cooperation in all fields and within the framework of the strategic agreement between the two countries.

This may be the last meeting held by the infallible in the Palace of Peace in the event of the selection of the House of Representatives of a new President of the Republic of Iraq.