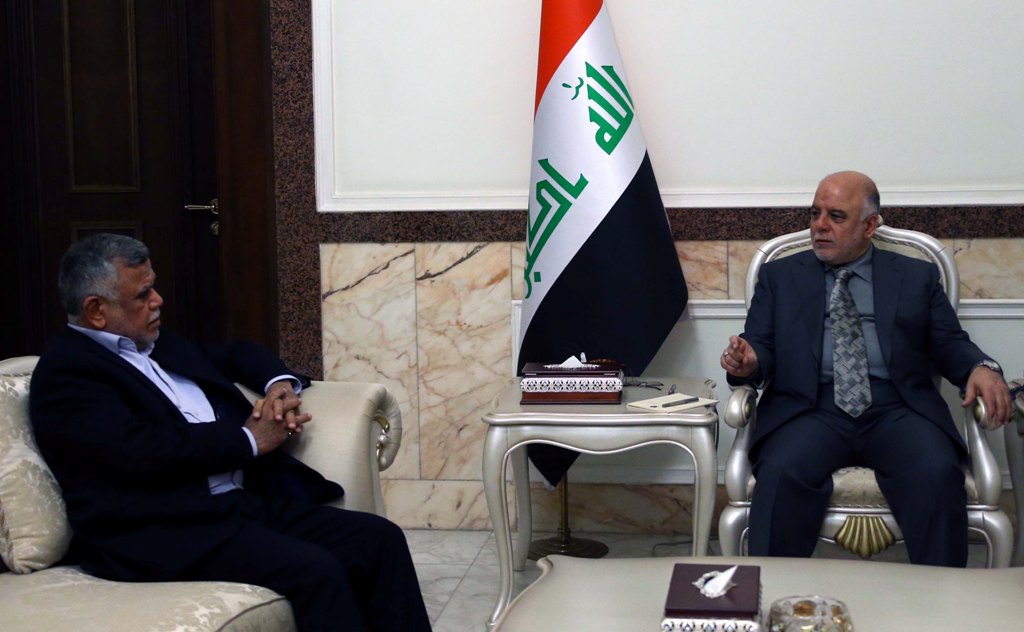 BAGHDAD (
Reuters) – Prime Minister Haider al-Abadi and head of the Fatah alliance Hadi al-Amiri held a meeting on Saturday to discuss the political situation, an informed source said Wednesday.
The source said in a press statement that “Prime Minister Haider Abadi held, this evening, with the President of the Fatah Alliance Hadi al-Amiri meeting in Baghdad and discussed the political situation,” without giving further details.
The political scene in Iraq is a wide movement among the winning forces in the elections that took place on 12 May 2018 to form the largest bloc in preparation for its mandate to form the next government after the parliament ended the election of its presidency.
Ended
m h n

[Ayna-Baghdad]
Speaker of the House of Representatives Mohamed Halbusi, that the decision to form the next Iraqi national government away from external influences.
“Al-Halbusi received on Wednesday a phone call from US Secretary of State Mike Pompeo, who praised his election as Speaker of the Iraqi Council of Representatives, and expressed his optimism that this step would be an embodiment of the will of the generation,” a statement from his office said. New and important future role in leading the country towards stability and comprehensive development. ”
He added that “the communication discussed the overall political and service situation and the continued full support of Iraq economically for the delivery of services to all cities of Iraq, and discussed the role of the international coalition in the war and the efforts to restore security and stability to liberated cities.”
Halabousi valued during the call “the role of the United States in supporting and supporting Iraq during the stage of liberation of the preacher,” referring to “
He added that “Iraq is on an important stage after folding the page of terrorism, which requires the activation of legislation and laws necessary to develop the Iraqi economy and provide investment opportunities and benefit from international expertise in this area.”
Al-Halboussi also stressed his keenness to “be the decision to form the next Iraqi national government away from external influences, and choose a strong government to be able to play its role in the fight against corruption and building state institutions and develop their administrative and economic capabilities to ensure a decent life for all people without discrimination.”

Sulaymaniyah, Iraq – September 19: The leadership council of the Patriotic Union of Kurdistan (PUK) announced on Wednesday the nomination of Barham Salih to the presidency after his vote earlier this day for his return to the party and his election as deputy secretary-general.

Saleh received 26 votes out of 40 votes, representing the total votes of the party’s leadership council.

Barham Ahmed Saleh was born in 1960 in the city of Sulaymaniyah in Iraqi Kurdistan. He was arrested twice by the Ba’ath party regime for belonging to the Kurdish Liberation Movement and spent 43 days in security detention camps where he was tortured. The examinations of the preparatory school in the prison and graduated obtained the first place in Kurdistan and the third at the level of Iraq at a rate of 96.5%. He left Iraq for the UK to complete his studies after his release.

Joined the ranks of the Patriotic Union of Kurdistan (PUK) in late 1976 in organizations in Europe and was responsible for the Office of Foreign Relations of the Union in the British capital – London was elected a member of the leadership of the Union in the first conference of the party in 1992 where he was assigned the task of managing the office of the Patriotic Union of Kurdistan in the United States, He also became the representative of the first government in the Kurdistan region to the United States of America. He had a prominent role in the definition of the cause of the Kurds

He was appointed to form the sixth portfolio of the Kurdistan Regional Government, where he assumed the post of head of the territorial government since October 2009 to 2011.

And resigned from the post of deputy secretary general of the Patriotic Union of Kurdistan and the party also on the back of differences with the leadership of the party and the legacy of former Secretary-General Hero Ahmed and later founded a political party under the name of the coalition of justice and democracy and fought the elections to the Iraqi parliament for the fourth session and got only two seats. ) 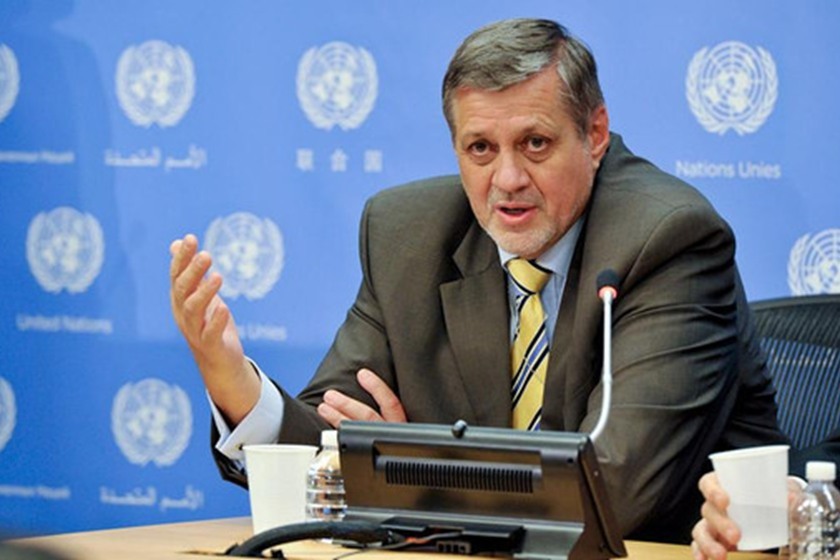 BAGHDAD – The Patriotic Union of Kurdistan (PUK) ended its meeting on Wednesday with the agreement to return Barham Saleh to the party in order to nominate him for the presidency of the republic.

A source familiar with the party for “appointed Iraq News”, “The leadership council of the Patriotic Union of Kurdistan voted for the majority of its members to nominate Barham Saleh for the post of President of Iraq after announcing his return to the party.”

He pointed out that “the party meeting ended with the nomination of Saleh representing the Patriotic Union of Kurdistan for the presidency in return for his return and his party (the coalition for justice) to the ranks of the National Union.”

The source added that “the official of the body working in the Political Bureau of the Union, Mullah Bakhtiar, objected to the nomination of Saleh and withdrew from the meeting of the leadership of the National Union, although he was aspiring to fill the post.”

(Baghdad: Al Furat News) The General Secretariat of the Council of Ministers, to disrupt the official working day of Thursday, the tenth of Muharram Haram on the occasion of the martyrdom of Imam Hussein peace be upon him.

The official spokesman for the Kurdistan Regional Government, Sven Dzei, announced the disruption of the day to tomorrow all the departments and institutions of the provincial government on the occasion of Ashura. End

The adviser to the Security Council of the Kurdistan Region pleased Barzani, on Wednesday, the US president’s envoy to the international coalition against the organization, calling for Brett McGurk the need for long-term military and security cooperation between the two sides.

Barzani’s press office said in a statement that ‘the latter was received at the MacGorek Library and the accompanying delegation with clerks in Erbil.’

Adding that ‘was discussed the efforts to form the next Iraqi government and the role of the Kurdish actor in the formation of the new cab’.

Barzani, according to the statement, on ‘the importance of long-term military and security cooperation between the Kurdistan Region and the United States of America’.

The President of the Association of Iraqi private banks, Wadih al-Hanal, on Wednesday, that the time is appropriate to activate the initiative of the Central Bank of “trillion dinars” for the support of small and medium enterprises .

Al-Hantal said in his speech during the workshop “one-trillion-dollar initiative to support small and medium enterprises” held in the city of Erbil and attended by “economy News”, the reason for non-activation of the initiative at the time of launch due to the existence of a window selling the currency, which banks were making profits from it, “When the interest rate was set at 4% to lend to the market there was another source of profit, the window of the currency, but the recent profits ended is left to banks only lending .”

He pointed out that “banks lend from their deposits at a greater interest or Murabaha greater than 4% so when it comes to the initiative of the Central Bank, which is determined by 4% do not use it, because it has funds and can lend .

Al-Hanalal thanked the Kurdistan Bank for sponsoring the initiative of the trillion dollar initiative and stressed the encouragement of the Association of Iraqi Private Banks for such activities in the coming stages .

US special envoy to Iraq, Brett McGurk, has met yesterday with Secretary-General of the Alliance for Democracy and Justice Barham Saleh in an undisclosed manner and away from the media.

According to reports today, MacGurk discussed with Saleh in the city of Sulaymaniyah the possibility of becoming the last president of the Republic of Iraq.

The reports said that McGurke handed leadership of the Patriotic Union of Kurdistan Mullah Bakhtiar a message to be put forward by the latter in a meeting of the leadership of his party, which is decided to resolve the presidency of the Republic.

The reports added that the message of McGowork contains the vision of the Government of the country to the post of President of the Republic, and the next federal government.

“In a joint press conference with Mullah Bakhtiar, the candidate for the presidency of the republic, McChork said Tuesday that” an important decision will be issued from Iraq in the coming days regarding the formation of the next federal government.