(Baghdad: Al-Furat News) Revealed a member of the Political Bureau and spokesman of the National Wisdom Stream, Nofal Abu Ragheef, the latest developments in the work of the nucleus of the largest bloc.
Abu Ragheef said in a press statement that “the nucleus of the largest bloc is for an alliance coming with clear landmarks and pillars and called it so as not to anticipate events and until the door remains open until the completion of the rest of the parties that we are keen to be with us in this alliance.”
“Yesterday, representatives of the coalition met and announced recommendations to agree on them, including the formation of committees representing all four parties to go to the Kurds and other national lists we are keen to participate with us in the coalition.”
Abu Ragheef said: “We have put forward names for these committees and immediately after Eid al-Adha holiday these committees will be represented by the parties to this alliance to the Kurds and will be clear on the basis of the program and agreements and strategies.”
When asked about the national axis and his participation in the alliance of the largest nucleus, Abu Raghef said: “They are the best able to answer with regard to them in this aspect, but we until the last moments yesterday to attend the Iraqi Union with us at the meeting and even the last minutes we call them and they confirm their presence but because we know Whether there is pressure and what interest I see and the real reasons for their reluctance to attend. ”
The leaders and leaders of the Alliance and the coalition of victory and the stream of national wisdom and the National Coalition, signed last Sunday at the Babylon Hotel in Baghdad, an agreement on an alliance forms the nucleus of the largest bloc.
“This cross-sectarian alliance rejects all forms of quotas and is determined to work hard to build a state of citizenship, justice, equality and the provision of life,” said Hakim al-Abadi, leader of the al-Hakamah movement, Sayyed Ammar al-Hakim, Gracious to all our people. ”
It also seeks to contribute seriously and actively to the formation of a government working hard to provide services and achieve reconstruction and the return of the displaced and fight corruption and accountability spoilers, and seeks sincere to provide new blood of our people to contribute to the management of the State during the next phase.
It was decided at the meeting “to open up to our other partners to contribute together in forming this bloc.”
http://alforatnews.com/modules/news/article.php?storyid=172473

Al-Sadr alliance, which has the support of the leader of the Sadrist movement Moqtada al-Sadr, said Friday that he managed to form the nucleus of the largest bloc during the current stage and will be charged in forming the next government.

He added that “the formation of the largest bloc through the rule of law and opening is difficult to achieve because of the statement of the Kurdish and Sunni position so far, as well as not announced the Kurdish parties and the national axis to join any political alliances in a formal manner,” noting that “the rule of law and opening did not exceed the number of seats More than 75 seats. “

He added that “the Suron got to the end of more than 120 parliamentary seats after the alliance victory, wisdom and patriotism,” explaining that “the largest bloc at the moment are going even because.”

The Kurdistan Democratic Party led by Massoud Barzani has been likely, on Friday, the formation of the next government in accordance with the mechanism of political consensus between all blocs winning in the parliamentary elections. 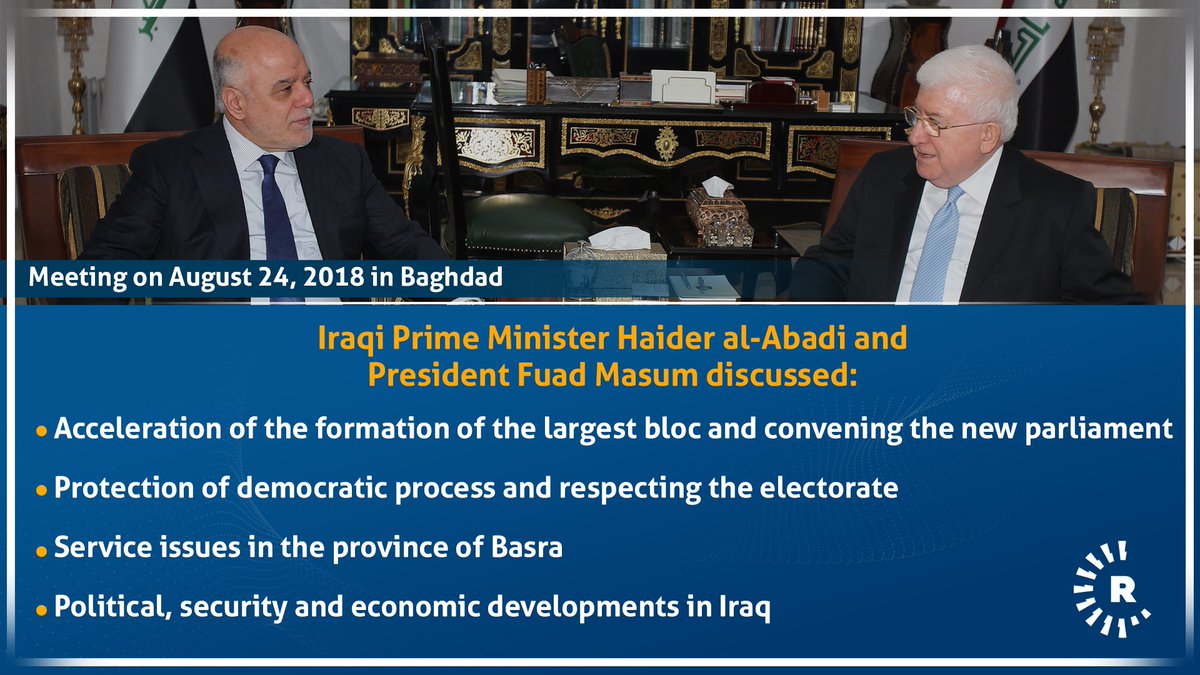 The President of the Republic Fuad Masoum met in Baghdad Friday with Prime Minister Haider al-Abbadi, in the context of his current sovereignty consultations with leaders of political forces in the country.

“The meeting discussed the political, security and economic developments in the country, including the problem of services in Basra, especially the developments on the subject of accelerating the formation of the largest bloc in preparation for the convening of the fourth session of the House of Representatives within the constitutional time The President of the Republic affirmed the commitment of all to respect him. “

“The need to strengthen efforts to protect and deepen the democratic process on the basis of adherence to the constitution, respect for the will of the electorate and hard and rapid action to respond to the urgent national will to carry out radical reforms in all fields has been stressed,” the statement added.

BAGHDAD – Prime Minister-General of the Armed Forces Haidar al-Abadi on Friday stressed the importance of not politicizing the popular crowd, noting that the removal of the crowd from the cities should not be subject to political pressure.

Abadi said in a statement issued after his visit today, the People’s Rally and his meeting with the officers of the brigades and directorates of the Commission, that Abadi “alive the lives of martyrs and their families and the wounded and heroic fighters who have won and defended the citizens,” noting that “the crowd a new start in which hope for people through Volunteering with the fatwa of His Eminence Mr. Ali al-Sistani and giving them their lives for their country. “

He added that “the stories of sacrifice offered by the heroes of the crowd and the security forces must be recorded,” explaining that “we in all international conferences and everywhere we say that the crowd institution followed by the State and the Commander-in-Chief of the armed forces and we stood in the face of anyone who wanted to tarnish his image.”

“The evacuation of the crowd from huge cities should not be subject to political pressure, gangs calling for our expulsion and defeat, but they have cells and ideological thought that we should continue to fight,” he said. “The sudden evacuation of the square will provide an opportunity for terrorist groups to attack citizens.”

Abadi stressed that “the constitution and laws prevent confusion between the security and military and intelligence work with the political,” stressing that “refused to be political parties in the crowd.”

He pointed out that “the use of sacrifices political conflicts for this or that is unacceptable,” noting that “we want to keep the crowd support and its end.”

Liked the Kurdistan Democratic Party led by Massoud Barzani, on Friday, the formation of the next government according to the mechanism of political consensus between all the blocks winning in the parliamentary elections.

A member of the party, Majid Shankali said in a statement to (/), “The two ruling parties in the region (the Union and the Democratic) will be allied with the blocks that achieve the Kurdish demands put forward at the moment,” pointing out that “the largest bloc in the case formed before the first meeting of the Council The new deputies will be formed according to the political consensus between the blocs winning in the parliamentary elections. ”

He added that “the political opposition within the next House of Representatives will be mandatory for the rest of the state or law because of the political dispute between the former parties,” noting that “not to get a compromise between all the political blocs in the coming days will open the door before the first parliament session without the formation of the largest bloc and enter the breach Constitutional. ”

The leaders of the political blocs and the victory and wisdom and patriotism, have announced the formation of the nucleus of the largest bloc, during their meeting in the Babylon Hotel in Baghdad, stressing that this nucleus away from sectarian quotas, declaring at the same time openness to all partners to join the largest bloc. End 25 T

Revealed the stream of national wisdom led by Ammar al-Hakim, Friday, the date of announcing the formation of the largest bloc and go to form the next government.

He added that “the understandings are still ongoing among all the leaders of the political blocs on the formation of the next government and the largest bloc,” noting that “wisdom and others, victory and patriotism did not put red lines for the other blocs for the purpose of forming the largest bloc.”

He added that “the meeting of the Babylon Hotel between the leaders of the winning blocs got to lay the foundations of the nucleus of the largest bloc,” excluded “to hold a similar meeting for the hotel Babylon in the coming days.”

The member of the State of Law Saad Almtalbi has revealed, on Thursday, the existence of dialogues led by his bloc with more than 200 deputies in the new parliament from various blocs to agree on the government program and the announcement of the largest bloc, stressing that no final agreement with any bloc except the opening.

The MP for the coalition of state law Mansour al-Baiji has confirmed, on Thursday, that his coalition closest to form the largest bloc. End 25 T