A brief statement to the Office of the Supreme Reference received by the agency {Euphrates News} a copy of it today, “on Monday, {13/8/2018 m} is the first of the month of Dhu al-Hijjah Haraam 1439 for migration.”

This will be the first day of Eid al-Adha on the 22nd of this August. is over

Revealed close to the leader of the Sadrist movement Moqtada al-Sadr, Sunday, 12 August 2018, the fact that the meeting with the Sadr delegation representing the conquest, in order to agree on the announcement of the largest bloc and near his return to Baghdad for this announcement.

“The news that al-Sadr’s meeting with a delegation representing the conquest in Najaf is inaccurate, and there is no meeting that brought together Sadr with a delegation of any other political forces,” said the source, who declined to be named.

He added that “there is no agreement on the declaration of any alliance or a large bloc between the people and the opening,” adding that “what happened between the two sides are understandings in the framework of the general, not an official alliance.”

The newspaper “Mada” reported in a report published Sunday, 12 August 2018, the arrival of a delegation from the Fath Alliance to the neighborhood of Hanana in Kufa to meet with the leader of the Sadrist movement Moqtada al-Sadr a few days ago.

The newspaper quoted a leading member of the Sadrist movement did not name him saying that “a delegation from the Fatah Alliance arrived in Hananah district in Kufa and discussed with Muqtada al-Sadr the formation of the largest parliamentary bloc,” stressing that “the delegation was commissioned by Hadi al-Amiri and has absolute authority to respond to the conditions of the chest “He said.

(Baghdad: Al-Furat News) Defense Minister Irfan Mahmoud Al-Hayali discussed with US Ambassador to Baghdad Douglas Silliman ways of cooperation and joint coordination between the two countries.
A statement to the ministry received the agency {Euphrates News} copy of it today, “Al-Hayali received in his office on Sunday, the US ambassador in Baghdad, Douglas Silliman, and during the meeting discussed the latest security developments and ways of cooperation and coordination in various areas.” 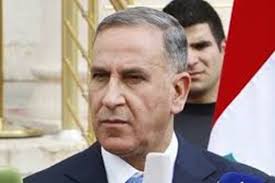 Baghdad – Mawazin News The
head of the list of victory in the province of Nineveh Khaled Obeidi, on Sunday, the cohesion of the victory alliance led by Haider Abadi, noting that his alliance victory began to form delegations to dialogue with the winners to form the largest bloc.
“He calls on all national and Arab media to investigate accurate information from the responsible sources within the leadership of the coalition, in order to preserve the credibility of our free media and to prevent what is happening within the political blocs,” Abadi said in a statement received by Mawazine News.
He added: “We started days ago to form delegations to visit and receive representatives of the winning blocs to dialogue and agreement and the establishment of appropriate mechanisms to announce the formation of the largest bloc in parliament, which certainly includes the identification of the programs of the next government and mechanisms of its executive.
He pointed out that “the alliance of victory, which boasts of its national approach, which allowed him to enter a single list in all provinces, will continue to open to all blocs without exception, because we consider that the blocks that have achieved presence in the parliamentary elections is the voice of the Iraqi voter, and that his choice came to believe in its ability to Represented during the next four years. “
He added: “Our meetings will witness a remarkable continuity during the coming days with all the winning alliances to discuss and discuss the formation of the largest bloc, with the emphasis on access to the understandings will remain conditional on the faith of the other blocs to reject quotas and their ability to legislate and find practical solutions to economic problems, To build a strong state of institutions, to contribute to the building of strong and professional security forces, to prepare to fight corruption, to pursue corrupt and retroactive, and to believe in the formation of a homogenous government not subject to quotas and able to restore hope to Iraqis in their work.

The Central Bank is developing solutions to stop the rise in the dollar exchange rate
12-08-2018 04:47 PMThe Euphrates –

“The central bank has announced its commitment to the terms of the International Monetary Fund, to stop the remittances between Iraq and Iran, which will lead the private sector to buy the dollar in larger quantities than the former market, for trade exchange between the two countries.”

He explained that “the large demand on the dollar, will make the price rises from the former, which drives the central bank to pump large amounts of the dollar in order to reduce the exchange rate, taking advantage of the large abundance of the dollar in the country,” asserting that “Iraq has about $ 12 billion dollars From Iran, but was affected by the US sanctions imposed on Tehran. “.

[Ayna-Baghdad]
Ki Company has confirmed the continuation of its service activity on a wider area within the country and commensurate with the needs of the Iraqi family, which requires easy access to advanced financial products.
“The company recognizes that it has a great responsibility to serve the citizens and meet their requirements to alleviate the burdens of life by providing financial services at a global level, especially as we are a national company working in close proximity to the community,” said Ahmed Kazem, director of the commercial department at the company. To provide all services and enhance mutual trust between the company and 7 million citizens holding the company card. ”
Kazem pointed out that “the reality of payments in Iraq in a continuous development, where the company operates according to the requirements of the local market, which seeks sustainable development and requires sophisticated products, as confirmed by the instructions of the Central Bank of Iraq, which is the organizer of the electronic payment process and contributed to make a quantum leap in this area “He said.
He pointed out that “this national edifice works to provide products that do not burden the Iraqi citizen and easy and does not bear the additional financial burdens, and international companies such as Visa seeks in its plan for 2020 to make the authorization of financial movements on the network is biometric way, which makes the system of national pride In terms of design and performance. ”
Kee’s family includes more than 7 million beneficiaries across Iraq.
http://www.alliraqnews.com/modules/news/article.php?storyid=76630

Informed sources told Shafak News that the visit to Ankara will address the bilateral relations between Iraq and Turkey.

According to the sources, it was not yet decided whether Abadi would go to Tehran or not.

Earlier this week, the official AFP news agency reported that Abadi would visit Tehran and Ankara next week, two economic allies exposed to new US sanctions.

However, the Iranian Foreign Ministry confirmed that it was not aware of the visit of Iraqi Prime Minister Haider Abadi to Tehran on Wednesday.

Abadi said Tuesday that Iraq was forced to abide by US sanctions on Iran, although he did not “sympathize with” Iran, recalling that his country has suffered the international embargo for 12 years.

“We do not sympathize with the sanctions or interact with them because they are a strategic mistake, but we are committed to them,” he said at his weekly press conference. “The sanctions are generally unjust and I have declared my position.”

(Baghdad: al-Furat News) The Office of the Supreme Religious Authority, Grand Ayatollah Ali Imam al-Sistani expects to see the crescent of the month of Dhu al-Hijjah clearly on Sunday evening in the horizon of the city of Najaf.

According to the Al-Ahla Time Book of 1439H issued by the Office of the Supreme Reference, “The crescent of the month of Dhul-Hijjah is expected to be on the evening of Sunday, 12 August 2018, in the skyline of the holy city of Najaf at sunset at { 6:50} “.

“In this case, the crescent is expected to be clear,” he said.

It should be noted that it is stated in the introduction to the booklet that “these calculations do not represent the opinion of the religious authority, but are merely astronomical expectations, because the beginning of the lunar months depend on the confirmation of the vision of the crescent law, so we hope the believers all monitor the halves of the months according to the data mentioned in this brochure And let us know if possible. ”

The Supreme Judicial Council clarified the decisions of the judicial body for the elections in the Federal Court of Cassation for the purpose of settling the appeals within the time limit of the results of the parliamentary elections after the completion of the process of manual counting and partial counting of them and announcing their results last Thursday.

The spokesman of the Judicial Council Judge Abdul Sattar Birqdar in a statement received by the agency {Euphrates News} a copy of it, “What is meant by the statement No. (71) issued on 12 August 2018 of the Electoral Judiciary is to submit an appeal against the decision of the Electoral Commission number { 69} issued on Thursday, 9 August 2018, on the announcement of election results as a result of counting and manual sorting to the judiciary by the Board of Commissioners.

Berkdar added that “the appeal shall be accompanied by evidence based on the evidence and the Board of Commissioners shall respond to the appeal and send it with the answer to the judiciary in the Federal Court of Cassation to adjudicate the appeal in accordance with the provisions of the law.”

The judiciary of the elections in the Federal Court of Cassation decided today that the complaints on the results of the elections of the Iraqi Council of Representatives for the year 2018, which was reported on Thursday to the Commission directly and which are separated in accordance with the provisions of the law. ”

The statement of the Supreme Judicial Council,” in case the complainant’s conviction