The French news agency ‘AFP’ the arrest of a foreign exchange official in the Central Bank of Iran.

Ahmed Akraji, a deputy of the Central Bank of Iran for foreign exchange affairs, was sacked on Saturday morning following the fallout of the collapse of the Iranian riyal and its fall by 20%, which casts a shadow over the Iranian government.

The new head of the central bank, Nasser Hamati, who was appointed days ago instead of Waleedullah Saif, who was sacked after the collapse of the historic riyal, may in turn give up his foreign currency assistant, Ahmed Araghji, the Tasnim news agency reported.

The agency said the presence of Ahmed Araghaji, who lacks experience in such a sensitive position has been the subject of many criticisms of deputies and officials repeatedly.

The changes come in an attempt by the government to halt the riyal-dollar-losing series, losing 20 percent of its value since last month, leading to higher prices, inflation and a halt in buying and selling.

While popular protests have continued throughout Iran for five days, the Supreme Economic Council approved Saturday a meeting chaired by Iranian President Hassan Rowhani and attended by the heads of the three authorities.

According to the Iranian news agency, ‘the Council agreed on what they described as the outlines of the new policies of the Central Bank on foreign currency and ways to accelerate the confrontation of spoilers and the delinquent economic affairs’.

The Alliance of Suron, on Sunday, a meeting expected between the leader of the Sadrist movement Moqtada al-Sadr and Prime Minister Haider Abadi, the head of the Fatah alliance Hadi al-Amiri and the leader of the wisdom movement Ammar al-Hakim.

A member of the coalition, Raed Fahmi said in a statement to / information / that “Sadr will meet Abadi, Amiri and Hakim during the coming period to discuss political alliances and the formation of the government expected,” pointing out that “the meeting will lay the main points to form a government.”

The leader of the Sadrist movement, Moqtada al-Sadr has announced, earlier, 32 points to participate in alliances to form the next government, after the demands of legitimate demonstrators. 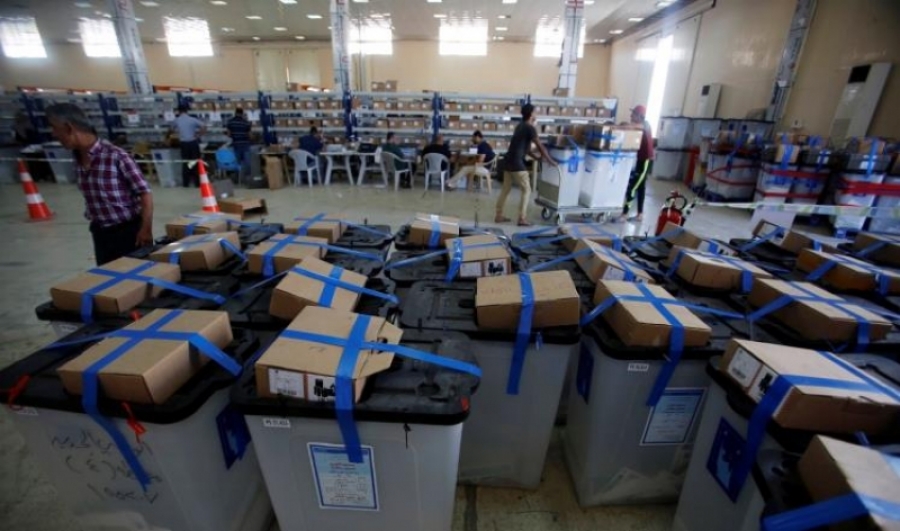 BAGHDAD (
Reuters) – Iraq’s electoral commission will announce the results of the counting and hand-counting of the suspect funds on Monday, the official Iraqi channel reported on Sunday.
The channel said in a news story / Mawazin News / “The Electoral Commission will announce tomorrow the results of the counting and manual counting and decisions of the judges assigned.”
The Electoral Commission began on the fourth of last July, the process of counting and manual counting of funds questionable in the recent parliamentary elections.
The Iraqis voted on May 12, the parliamentary elections to choose a new parliament for the next 4 years, in an electoral process marred by many violations and frauds by political blocs and observers.

A previous meeting between the two delegations

“There was no decisive decision today, but the opening of the Kirkuk-Erbil road is imminent,” deputy commander of the Kirkuk axis in the Peshmerga forces, Maj. Gen. Hama Reeker, told the Rwandan media network. “It can be said that 70% the path”.

He said that “the delegation of the Iraqi government demanded the erection of a customs crossing near Baradi, but the Kurdistan Regional Government refuses to do so, so Baghdad agreed to erect the customs crossing in his former location in the region of Clore.”

The delegation of the two governments held a meeting last week in Baghdad, and the statement of the meeting to reach an agreement on all issues.

It is noteworthy that the road between Erbil and Kirkuk has been closed since the events of 16 December last, and despite the many discussions between the governments of Iraq and the Kurdistan Region on this matter, but the road is still closed.

It is expected that the reconstruction of the Berdy Bridge will take at least 8 months, so the Kurdistan Regional Government is scheduled to install a steel bridge, which requires a period of one month until the completion of the Iraqi government to rebuild the bridge.

“On the occasion of Eid al-Adha, we extend our sincere congratulations to the families of the martyrs, our heroes and all Muslims in Kurdistan, Iraq and the world,” he said.

(Baghdad: Al-Furat News) The Kurdistan Regional Government, on Sunday, the holiday of Eid al-Adha, in government departments and institutions.

“On the occasion of Eid al-Adha, we extend our warmest congratulations to the families of the martyrs, our patriarchal heroes and all the Muslims in Kurdistan, Iraq and the world,” said Sven Dzai, spokesman for the government of the province. Prosperity for the people of Kurdistan. ”

“We announce to our dear citizens that the Eid holiday will begin on Sunday 10 August and will continue until Saturday 25 of the same month, where the official working day will start on Sunday, August 26.”

He added that “the decision to ensure the Ministry of Finance to allocate and funding the amount of 3 billion dinars for the project to study and design and implementation of an integrated water project concretity capacity of 100 cubic meters, with lines carrier Umm Qasr included within the projects Petrodollar Basra also.

The statement pointed out that Dhi Qar decided to allocate 5 billion dinars to the province to complete the implementation of 151 school contracts and 10 billion dinars for the establishment of Hawra Hospital for childbirth and children in the Shatrah area. In Nasiriyah / Center of burns and plastic surgery, listed within the development of the regions for 2018.

He pointed out that “the Council of Ministers also decided to the Ministry of Finance to allocate and funding 3 billion dinars to the province of Muthanna to complete the implementation of 60 schools, and the allocation and financing of 5 billion dinars for the project to establish stations and streams Rumaitha and vegetables with the acquisition.

The text of the decision to secure the amount of 7.5 billion dinars to the Ministry of Construction and Housing and Municipalities and Public Works and 50 million dinars for each province, and 2.5 billion Dinars to the Secretariat of Baghdad

BAGHDAD / The leader of the wisdom movement, Habib terminal, said Sunday that the delay in announcing the results of the counting and manual counting of the parliamentary elections will interfere the country in many problems, calling on the Council of Judges assigned to resolve this process as soon as possible to allow the new parliament to start its work.

He said the end of the “eye of Iraq News” that “this time limit worked by the Council of Judges assigned in the process of sorting the funds challenged, is expected, but in the current situation, we hope to resolve things this week in order to allow the new parliament to start his work, That the country is going through problems and disorders and it is better to resolve this dilemma. ”

He added that “there is a front of the losers will challenge the results of counting and sorting by hand and this appeal is likely to last for 15 days and therefore this is not reasonable at all because this series will not end and remain routine appeals continued and the country is in an unstable situation and everything is now disabled.”

The Ministry of Finance in the Kurdistan Regional Government, on Sunday, to pay the salaries of employees for the month of May.

A government source said the ministry’s bureau and the Peshmerga brigades received their salaries for the month of May.

He added that the disbursement of Peshmerga salaries will continue in the coming days.

The Ministry of Finance has announced earlier that the salaries will be disbursed on Sunday, 5 August 2018, pointing out that the Ministry of Peshmerga will receive first, followed by the Ministries of Education, Health, Higher Education and other ministries.

Al-Hayat said in a report published on Sunday that the Kurdish leader Barham Salih may get the presidency of the Iraqi Republic with the support of the Kurdistan Democratic Party led by Massoud Barzani.

The newspaper quoted unnamed Kurdish sources as saying that “the Kurdish leader Barham Saleh is one of the candidates for the presidency and has great fortunes.”

She pointed out that “Saleh has not yet announced his candidacy for the position and did not provide any party as a candidate has the support, but sources expect to be a trump card for any coalition determined by negotiations to form a new government.”

The Central Council of the Patriotic Union of Kurdistan, announced on Friday, 3 August 2018, his candidacy, Mohammed Saber Ismail Adil late Jalal Talabani for the post of President of the Republic of Iraq.

The brother of Saber, a member of the Kurdistan Parliament of the Patriotic Union of Kurdistan Izzat Saber, said in a statement quoted by the website spokesman for the National Union pukmedia, that “was nominated Mohammed Saber Ismail by the Central Council of the National Union and officially for the post of President of the Republic of Iraq.”

He added that “Mohammed Saber Ismail, is a candidate by the leadership of the National Union, for the post of President of the Republic, in the case of the position of the share of the Patriotic Union of Kurdistan, indicating that this nomination came after 56 years of political and diplomatic struggle for the Kurds.

In the same context, a member of the Political Bureau of the Patriotic Union of Kurdistan and its spokesman Saadi Ahmed Bira that there is no central decision and final nomination of Mohammed Saber to the presidency of Iraq, noting that the current president and party member Fuad Masum is also a strong candidate.

Al-Sharq al-Awsat newspaper quoted a beer as saying that “there is not yet a specific candidate for the post of president of the republic. What has been circulated regarding the nomination of Dr. Mohammed Saber for this position is the nomination of the Central Council of the National Union, which is one of the institutions of the party, In her opinion in such matters. ”

He pointed out that “the resolution of the candidate for the presidency has not been discussed so far within the political bureau of the party and the leadership and are the only body authorized to do so.”

“Dr. Mohammed Saber is one of the candidates, as is the current president, Dr. Fuad Masum, who has the right to run for office,” Bira said.