By Rudaw 55 minutes ago 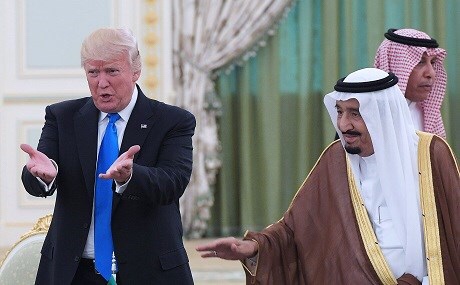 ERBIL, Kurdistan Region – America is using all its economic and diplomatic clout to undermine Iran’s oil sector, calling on its ally Saudi Arabia to boost its oil output and on Asian buyers to get their petroleum elsewhere.

US President Donald Trump tweeted on Saturday that Saudi Arabia has agreed to raise its oil production by two million barrels per day “because of turmoil and dysfunction in Iran and Venezuela.”

On June 28, US Ambassador to the UN Nikki Haley travelled to India to urge New Delhi to “rethink” its business relationship with Iran. India is the biggest buyer of Iranian oil after China.

China, India, Japan, and South Korea are the top customers of Iranian crude. The four Asian states together import around 55 percent of the Iran’s total 2.7 million barrel export.

On May 9, Trump withdrew from the 2015 Iran nuclear deal. New US sanction will be imposed on Iran from November 4 – a symbolic date when the US embassy in Tehran was occupied in 1979.

Iran is a rentier state dependent on its oil income for more than 50 percent of its GDP.

Under previous US sanctions, Iran’s oil exports fell from 2.5 million barrels per day in 2011 to 1.5 million in 2012. At that time, major Asian oil buyers were given a waiver, requiring them to reduce 20 percent of their business trade with Iran each six months.

On May 24, US Secretary of State Mike Pompeo announced “unpresented sanctions” on Iran.

Multinationals have already begun pulling out of Iran so as not to lose more lucrative markets in the US. These include French oil giant Total, the world’s largest container shipping company Maersk, and multinational airplane producers Airbus and Boeing.

Saudi Arabia is capable of increasing its oil production by two million barrels per day to stabilize the oil market and prices if Iran’s oil exports fall considerably as expected.

Saudi Arabia has objected to Iran’s support for Shia groups in Yemen and Bahrain. The US-Saudi offensive on Iran’s oil industry is designed to prevent Tehran’s adventurism in the Middle East.