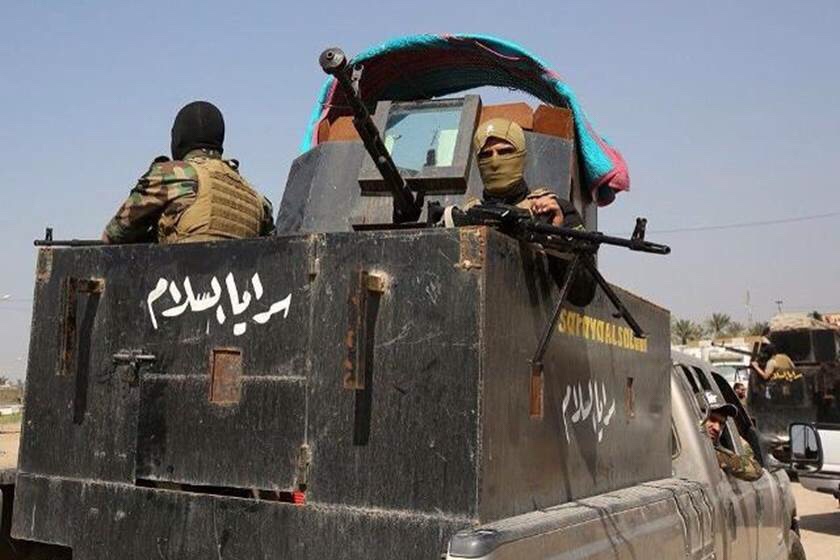 The leader of the Sadrist movement Moqtada al-Sadr decided on Wednesday to freeze the work of the military wing of the current in the oil-rich Basra province of southern Iraq for two years, and expelled its official.

See the text of the freezing decision document issued by the Information Office of the Sadr: 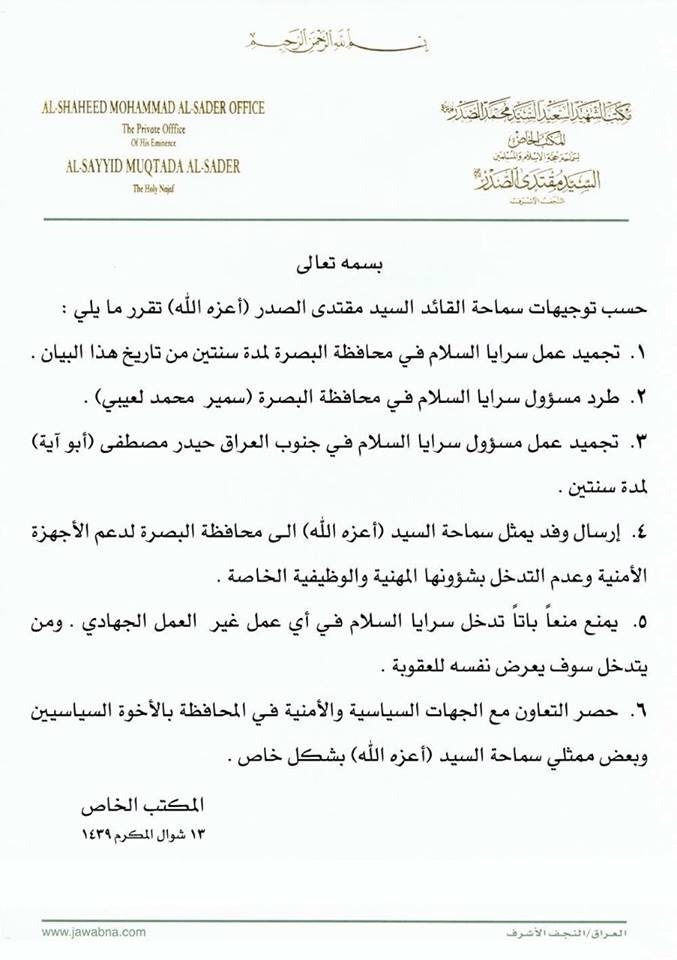 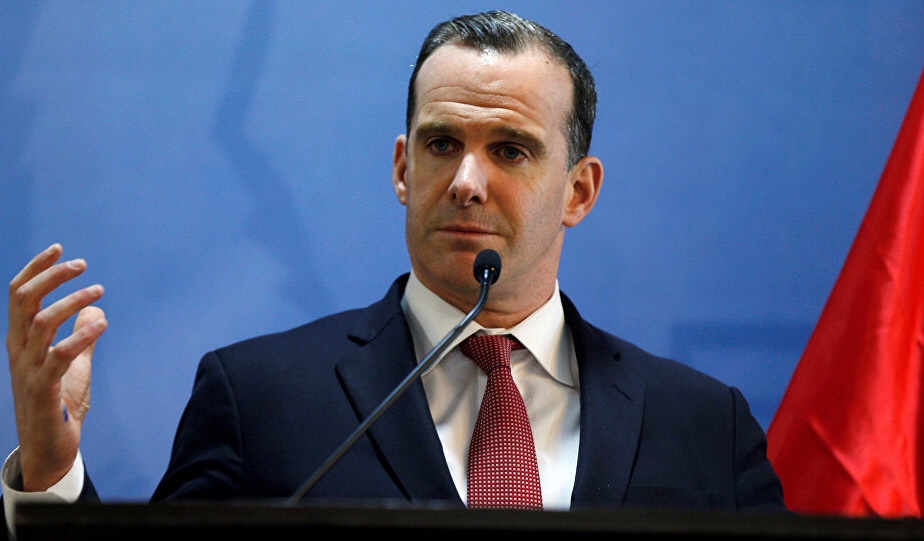 More than 42 countries participated in the regional meeting of political leaders of the International Coalition against the terrorist organization “Daqash”, which was held in the Moroccan city of Skhirat on Tuesday.

US Special Envoy Donald Trump expressed his intention to “defeat and eliminate an oppressive organization.”

“We are determined not only to win quickly but to defeat,” he told a joint press conference with Moroccan Foreign Minister and Minister of Cooperation Nasser Boureita.

“This is more important than the collapse of the alleged caliphate in Iraq and Syria,” he said.

He said that the efforts of the international coalition also based on “defeat the ideology of the organization and its media,” noting that the meeting also discussed “means and mechanisms that can work to combat the organization and prevent foreign terrorists from crossing the border as well as limiting the means of financing.”

“Unfortunately, the presence of the organization is not limited to Syria and Iraq and we will continue to fight it,” Trump said.

On terrorist groups in the Sahel and Sahara, McGork said the groups were an extension of “former terrorist groups belonging to al-Qaeda that used a banner calling for the greatest amount of funding.”

“This is the first meeting of its kind in Africa,” he said. “The inclusion of the Community of Sahelo-Saharan States and the five countries in the Sahel into the international coalition against terrorism is very important for its role in Africa.

“The Islamic state is trying to impose its hegemony on Libya and there are many terrorist organizations in Libya and we have worked hard to prevent the organization from settling in Libya,” McGork said.

He added that “Libya was present with us today in the coalition, of course, either through the fight against terrorism or support the peace process as approved by the United Nations.”

For his part, Bourita said, “Libya has been targeted for a long time because of the absence of state structures, given Libya’s vast territory and its proximity to terrorist groups such as Al-Qaeda in the Islamic Maghreb.”

He added that the unstable situation in Libya lasted long. “After the Skhirat agreement was supposed to hold elections that give legitimacy to institutions to counter terrorism and provide basic services to the Libyan people.”

“Unfortunately, the political schism is still there, so Morocco, in accordance with His Majesty’s directives and in consultation with the Libyan brothers, suggested either continuing under the Skhirat agreement in the transitional phase on solid foundations or going to elections that would result in legitimate authority. But the latter needs security measures and political consensus “He said. 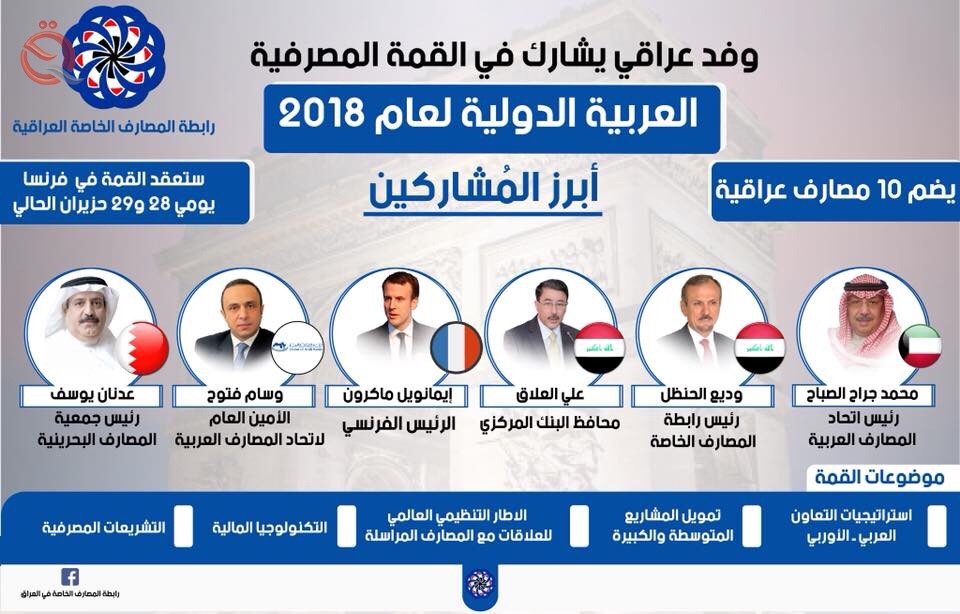 A senior Iraqi banking delegation will attend the 2018 Arab International Banking Summit in Paris on June 28-29, entitled “Medium Banking Dialogues”, in the presence of central bank governors in a number of Arab and Western countries as well as Arab banking figures.

The participation of the Governor of the Central Bank of Iraq Ali Alaq and the President of the Association of Iraqi private banks Wadih al-Hanal and representatives of 10 Iraqi banks.

The Executive Director of the Association of Iraqi Private Banks, Ali Tariq, in an interview with “Economy News”, “The participation of the Iraqi delegation in the banking summit is a good participation that will result in several decisions, including the opening of the Iraqi banking sector to global banks, which facilitates the process of trade between Iraq and science as well as the entry of investors to the country, “pointing out that” the Iraqi delegation was very important by the leaders of the banking summit as well as foreign Arab delegations. ”

He added that “the Iraqi delegation includes the governor of the Central Bank of Iraq, Ali Alaq, and the President of the Association of Iraqi private banks, Wadih al-Hanal, and a number of Iraqi banks.”

For his part, the Secretary-General of the Union of Arab Banks Wissam Fattouh commented on the summit that it is “the largest Arab international banking summit for 2018, one of the most important international conferences.”

He pointed out that “the invitations were at the level of heads of Arab banks and officials of major international organizations, including the Organization for Economic Cooperation and Development OECD, Le Figaro, Union of European Banks” Brussels, “Paris Europlais, Francophone Banking Union, the Network of Financial Integrity in America, Financial Services, International MasterCard, the global financial support institution for children and youth in Amsterdam.

He explained that the Union aims at establishing a Mediterranean Arab region for financial and banking cooperation under the name of “Mediterranean Banking Dialogue Conference”, to include the Arab countries surrounding the Mediterranean Sea, such as Morocco, Algeria, Libya, Jordan and Lebanon, as well as European countries, Spain and France. “He stressed that” this conference will have a positive impact on the region economically and is complementary to the Conference, “Cedar,” hoping to “strengthen Banking and Commercial Relations Between the Arab and European world, “adding that” other topics such as the Mediterranean region and the financial culture in our region will be addressed. ”