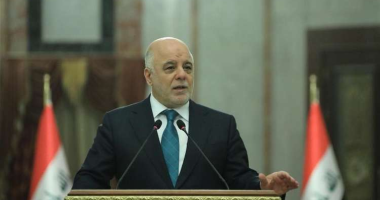 Iraqi Prime Minister Haidar al-Abbadi discussed with Parliament Speaker Salim al-Jubouri and Vice-President Iyad Allawi on Monday the progress of the political process and the formation of the new government in the presence of leaders of the coalition of victory and patriotism .

The statement added that the meeting discussed the political process and the formation of the next government within the framework of the national and the challenges of security, economic and service, pointing out that it was agreed to continue meetings and deliberations with all national forces in line with the aspirations of the Iraqi people .

The political scene is witnessing a wide movement among the winning forces in the elections that took place earlier to form the largest parliamentary bloc in preparation for its mandate to form the next government .

BAGHDAD –
The General Secretariat of the Council of Ministers discussed with the World Bank the rehabilitation of residential areas in the liberated areas.
“Under the guidance of Prime Minister Haider al-Abadi on the financing and promotion of the housing sector, the Secretary-General of the Council of Ministers Mehdi Al-Aalak chaired a meeting attended by the Regional Director of the Middle East Bureau at the World Bank Saruj Kumar Jah and the Special Representative of the World Bank Mission in Iraq Yara Salem, to discuss further the issues discussed in the previous meetings on the issue of financing the housing sector in general in all governorates of Iraq and the rehabilitation of residential areas in the liberated areas in particular.
He stressed the need for coordination between the Iraqi institutions concerned and the World Bank to support the sector, and expand the number of areas covered rehabilitation of residential areas to include rural and urban areas to extend to all Iraqi provinces, pointing out the importance of taking into account the start of the areas most affected by terrorist acts.

(Baghdad: Al-Furat News) announced the National Pension Board, direct payment of salaries of civilian retirees for the month of June.

A statement of the agency received the agency {Euphrates News} a copy of it, “and in coordination with the Rafidain Bank and Rashid and the Iraqi Bank for Trade Tbi was direct payment of salaries of retirees civilians for the meal in June 2018.”

She stressed that “pensioners of smart card holders {Key Card} and manual exchange retirees can check the exchange centers to receive their salaries.”

The National Institute for Astronomical Research announced that the date of Eid al-Fitr in many Arab countries will be agreed on Friday, 15 June.

Egyptian media quoted Hatem Odeh, head of the institute, as saying that the current month of Ramadan will be only 29 days and ends on Thursday, June 14, where the crescent will be born in the month of Shawwal immediately after the association coincides with the end of Ramadan.

Zaq,” The calculations indicate that the month of Ramadan this year will end on the day it began, that is, it began on Thursday and will end on Thursday, and promised him twenty-nine days. ”

The head of the Rabat Society of Astronomy Abdelhafid Bani said that Eid al-Fitr is expected to be held in Morocco on June 15, adding that “the vision of the crescent is expected to be possible on the 29th of Ramadan, corresponding to June 14, according to astronomical standards.”

in a statement to “Al-Ghad Press” that “the dialogues with various political blocs focused on forming the largest bloc in the national space, especially as the response so far good.” He pointed out that “the alliance has almost daily relations with different blocs and political forces.”

And al-Asadi that “the alliance of victory puts the name of the current Prime Minister Haider Abadi by his bloc as a candidate, but the other blocs are reserved to offer their candidates, and here postpone the issue until after the formation of the largest bloc.”

The coalition of victory and patriotism today discussed the form of the next government and facing the security, economic and service challenges.

The meeting, according to the correspondent / Mawazin News / political held at the invitation of Dr. Saleh al-Mutlaq and the presence of a number of leaders and deputies of the coalitions, including Prime Minister Dr. Haider Abadi, Dr. Salim al-Jubouri, Speaker of the House of Representatives and Dr. Iyad Allawi, Vice President and former Defense Minister Khalid al-Obeidi.

The meeting discussed “the political process” and “the shape of the next government within national frameworks”.

The two delegations agreed to continue meetings and deliberations with all national forces in line with the aspirations of the public of the two alliances.

The provincial councils of Najaf, Babel and Wasit announced on Monday that the official working hours will be suspended on Wednesday to mark the anniversary of Imam Ali’s death.

The data for the three provincial councils said that the disruption will include all departments except the directorates of education and service departments.

The province of Najaf usually frequented thousands of visitors to Imam Ali shrine to revive the occasion.

The “coalition of victory” led by Prime Minister Haider Abadi, said on Monday that the political forces approached the formation of the government.

“The process of forming a government will not be as difficult and complicated as in previous years, because the country is going through crises and everyone understands the seriousness and seriousness of the country’s survival without a government for a longer period,” coalition leader Mohammed al-Abed Rabbo told Baghdad today.

This is the political blocs are taking place during the past few days, a political movement among them to reach understandings and the formation of the largest bloc, which in turn will form the next government.

The Independent Electoral Commission announced on Saturday (19 May 2018) the final results of the legislative elections, topped the list of “Saron” with 54 seats, followed by the alliance, “Fatah” with 48 seats, and the coalition, “victory” with 42 seats, State of law “with 26 seats, the” Democratic Party of Kurdistan “25 seats, while the coalition” national “21 seats, and stream” wisdom “20 seats, while the Patriotic Union of Kurdistan won 18 seats.