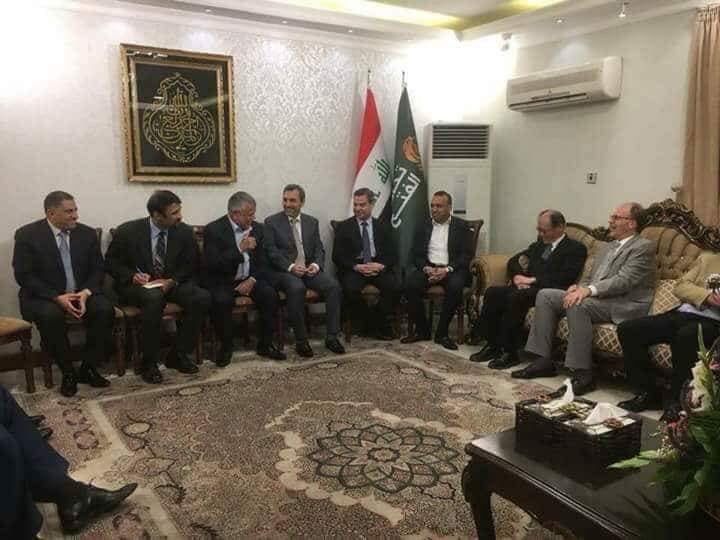 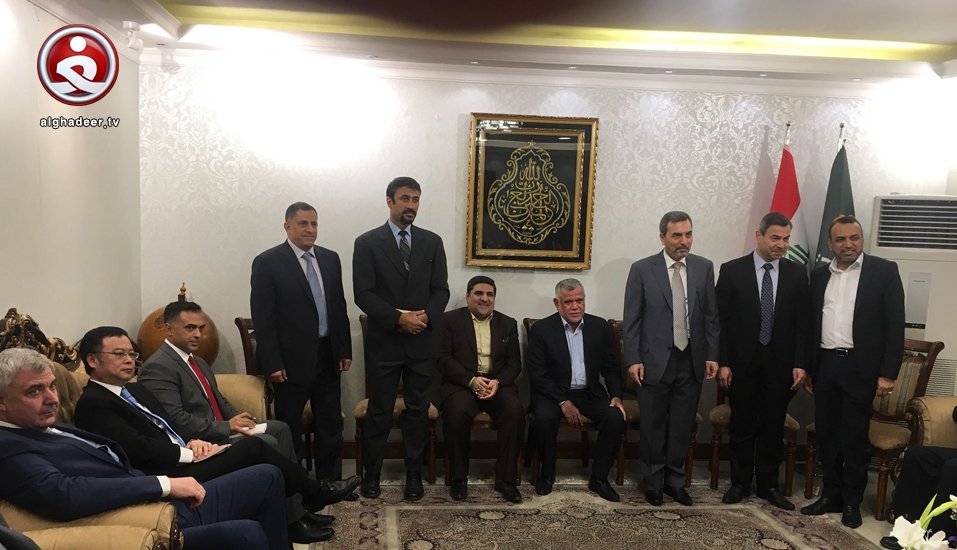 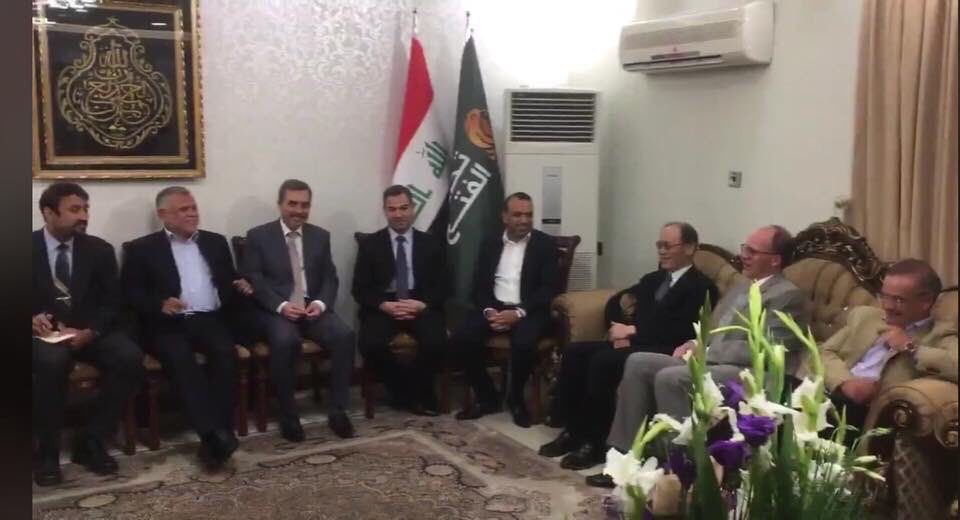 “Iraq will generate an additional $ 25 billion in revenue this year because of the high oil prices and the growing demand from its permanent customers in the Asian market,” said Ahmed Basri, technical adviser at Iraq’s Sumo Oil Company .

Al-Basri said that “Iraq was setting expectations of a margin of lower crude, but political developments and tensions in the region and other factors accompanied by the increase in prices in a manner is ideal for the oil-rich country.”

According to Al-Basri, “the rise in international crude prices could positively affect important sectors in Iraq that have been damaged by the war on terrorism, and it will negate Iraq’s need for further borrowing.”

Iraq currently produces more than four million barrels of oil per day, of which about 3.5 million, and seeks to increase production to more than 4.5 million this year.

Iraq hopes that the surplus money will be reflected in the rise in oil prices positively on the budget and contribute to the completion of part of the reconstruction needs of many cities that were destroyed by the invasion of an organization calling for large areas of Iraq in the summer of 2014, and then succeeded in the liberation of Iraqi forces in December First Last.

In February, according to a study by Iraqi and international experts, the Iraqi government estimated the actual need to rebuild the country at $ 88.2 billion over 10 years.

The Iraqi oil ministry is seeking to complete the signing of six contracts for exploration and development in the oil and gas patches in several regions of the country, according to a statement issued by the ministry, yesterday, saying that the Department of Contracts will continue to sign contracts, on Monday.
Three contracts were signed on Sunday with the UAE-based private Crescent Petroleum Company. Two contracts are due to be signed on Monday with China’s Jiujed and a contract with China-based United Energy Group.

According to the ministry’s statement, the signed contracts belong to areas in the south and east of the country, most notably Sinbad, Neptaneh, Huweiza and Khashm al-Ahmar in Basra and Diyala.

For his part, said the decision of the Finance Committee in the Iraqi parliament, Ahmad Hama, “The Iraqi government estimated the price of a barrel of oil during the budget for the current year at $ 47, while the price today jumped to more than $ 75, which gave Iraq additional excellent amounts” .

“The rise in oil prices by one dollar per barrel will bring Iraq a billion dollars every year, meaning that the government will achieve a surplus of more than 25 billion dollars if oil prices continue throughout the year in this manner and stabilize the export rate at this level,” Hama said in a press statement.

He explained that “the government has a budget deficit of 13 trillion dinars (about 12 billion dollars) and if the survival of oil prices will end its deficit and deviate from external loans and will increase the reserve of the Central Bank of Iraq of foreign currency certainly.”

The Ministry of Oilannounced two days ago, the export of 108 million and 194 thousand, and 920 barrels, during the month of May, with revenues amounted to 7 billion 566 million and 294 thousand dollars.

Oil Ministry spokesman Assem Jihad said that the export statistics for May did not record any exports from Kirkuk fields.

Jihad pointed out that the daily rate of exports amounted to 3 million and 490 thousand barrels, adding that the average price per barrel amounted to 69,932 dollars.

For his part, said the expert on the Iraqi economic affairs, Walid Al-Sarraf said in his speech to “the new Arab” It is hoped that the Iraqi government will issue an expanded report by the end of the first half of this year, including additional financial revenues achieved and the lack of need to borrow to meet the budget deficit.

Al-Sarraf added that Iraq needs to keep oil prices within this level for several months beyond the budget deficit and not need to borrow external.
World oil prices have risen about 50 percent from a year earlier.  The price of oil fell in mid-2014 from $ 115 per barrel of Brent crude to less than $ 30 and resulted in heavy losses and a decline in financial revenues of oil-producing countries, before the price of recent rise, to reach more than $ 76 last Friday.

An expert on the Iraqi market for securities, Abdul Salam Adnan, told the “New Arab” that the additional amounts resulting from oil prices are supposed to be included in the supplementary budget of the state where the deficiencies or things that the government had to abandon when the budget was set 2018 at the price of oil 47 .

A spokesman for the leader of the Sadrist movement Moqtada al-Sadr Jaafar al-Musawi, the existence of ongoing negotiations between the alliance with other political blocs, noting that the last ten days of the month of Ramadan will be crucial in this regard.

“The concept of patriarchal government put forward by Iraqi leader Muqtada al-Sadr means the just state and the implementation of the law,” Moussawi said, adding that it would “take into account everyone without distinction between one province and another without preferring a category to another.”

“Sadr is an Iraqi man and his decision is an Iraqi decision,” Moussawi said, stressing that he “seeks to repel any foreign interference in Iraq’s internal affairs from any country.”

“The last 10 days of the holy month of Ramadan will be decisive,” Moussawi said, stressing that “naming the presidents of the republic and the councils of ministers and deputies is left to the national space, which constitutes the parliamentary bloc the most numerous.”

The Prime Minister and Commander-in-Chief of the Armed Forces Haidar Al-Abadi held a meeting of the Ministerial Council for National Security. The meeting was devoted to discussing the phenomenon of water scarcity in Iraq.

The Council listened to a presentation by the Minister of Water Resources, which included a plan to address the expected water scarcity for the current summer. The impact of the measures taken in neighboring countries, particularly the start of the filling of the Elissu Dam in Turkey, was also reflected. Necessary to strengthen water security during the summer period, where it was agreed to secure water quotas to meet the needs of citizens of drinking water and agriculture, taking into account the rational consumption of water.

The Council also reviewed the developments in the processing of electric power to meet the needs of citizens. The Council stressed the need for provincial councils to adhere to quotas and do not exceed the energy to ensure the distribution of electric power between the provinces of the country.

The water levels of the Tigris River in the cities of Baghdad and Mosul have dropped so dramatically that it is possible to cross the river on foot after the Turkish government announced the start of the filling of the Elso dam, which was built on the river’s source in Turkish territory. The Iraqi side and the low level of its water.

In the meantime, the Iranian authorities cut the water of the “small Zab” from the province of Sulaymaniyah in the Kurdistan Region of Iraq again, which caused a crisis for the water project in the district of Qalza Daza province.

According to the declaration of the Directorate of dams in the Kurdistan Region, the Iranian action caused the crisis of providing drinking water.

Iraq has been suffering for years from a steady decline in water revenues through the Tigris and Euphrates rivers, exacerbated the water shortage crisis as well as the low rainfall in the country over the past years.

The finance ministers of the Group of Seven (G7) have ended their meeting, expressing “unanimous concern and disappointment” over the US decision to intensify its trade offensive against its allies and trade partners, the finance minister said.

Mourinho called for a “prudence” at a summit of heads of state next week in Quebec.

The potential trade dispute dominated the G7 finance ministers’ talks after Donald Trump’s administration stepped up its offensive against its allies by imposing new tariffs on their steel and aluminum imports from Friday.

Speaker of the House of Representatives Salim al-Jubouri on Sunday received US Ambassador to Iraq Douglas Silliman, stressing the importance of the coming period in the path of stability.

“The speaker of the House of Representatives, Salim al-Jubouri, received the US ambassador to Iraq, Douglas Seelman,” the statement said. “The meeting discussed the overall security and political situation in Iraq and the region and ways of continuing cooperation between Iraq and the United States. In the field of combating terrorism, supporting regional stability and achieving peace for the peoples of the region.

He added that “the post-election phase was discussed, and the importance of intensifying dialogues between the Iraqi parties to agree on forming the next government according to the principle of partnership and understandings to be able to meet the challenges and represent all the spectrum of the people.”

“The next period will represent an important stage on the road to stability, beginning to develop the economy of the country and attention to services and the consolidation of relations between Iraq and other countries according to the principle of mutual common interests,” he said, praising the role of the United States in supporting Iraq,

The newspaper “Al-Ghad Press”, on Sunday, a document issued by the Electoral Commission for elections confirms waiting for resolution of the parliament’s decision by the Federal Supreme Court as being vetoed by the Presidency of the Republic.

The document showed that “the Commission respects all legislation and decisions issued by the Iraqi Council of Representatives.”

She pointed out that “the Commission is waiting to resolve the decision of the House of Representatives by the Federal Supreme Court as a veto from the Presidency of the Republic.”

The House of Representatives held earlier, an extraordinary session on the results of the elections and decided to re-counting and manual counting of the election results by 10% in all governorates of Iraq, in addition to the cancellation of votes abroad.

Twilight News / The Federal Police announced the release of abductees from the grip of an advocate after armed battles with the latter in Salahuddin.

In a statement, Major-General Raed Shaker Jawdat said that a force of 12 to 3 federal police clashed with a group of rioters in the Wadi Qara Jog and in the middle lane and managed to free two of the abductees.

He added that the kidnappers had been held by Da’dash for three months, Hamad Ahmed Hamad Hilal and Mohammed Mahmoud Dakhil Mohammed, residents of the village of Sedira al-Sufra in Sharqat district.