(Baghdad: Al Furat News) Issued an official statement from the US Embassy in Baghdad on the latest functions of the International Coalition against Da’ash in Iraq.

“At a ceremony held in Baghdad on April 30, the tasks of the Joint Task Force’s ground force were terminated, marking the end of major combat operations against Da’ash in Iraq and the announcement of a change in coalition responsibilities to focus on providing Support and training for Iraqi security forces. ”

He added that “the ceremony included the special tradition (Balff flag) where the flag was lowered for the unit and announce the end of its mission.”

In September 2014, the United States formed an international coalition of some 70 countries to support and support Iraq in its war against the Da’sh, which occupied three provinces after the fall of Mosul in June of the same year.

More than 5,200 US troops are deployed as trainers and advisers deployed in military bases in the country.

The Iraqi government announced on the ninth of December last year the final victory on the call and carry out operations to clean up and control the sleeper cells.

The U.S. will ensure a strong and lasting footprint in #Syria such that #ISIS cannot return and those liberated are not exploited by the Assad regime or its Iranian supporters. We remain committed to the Geneva process and a political settlement honoring the will of all Syrians. 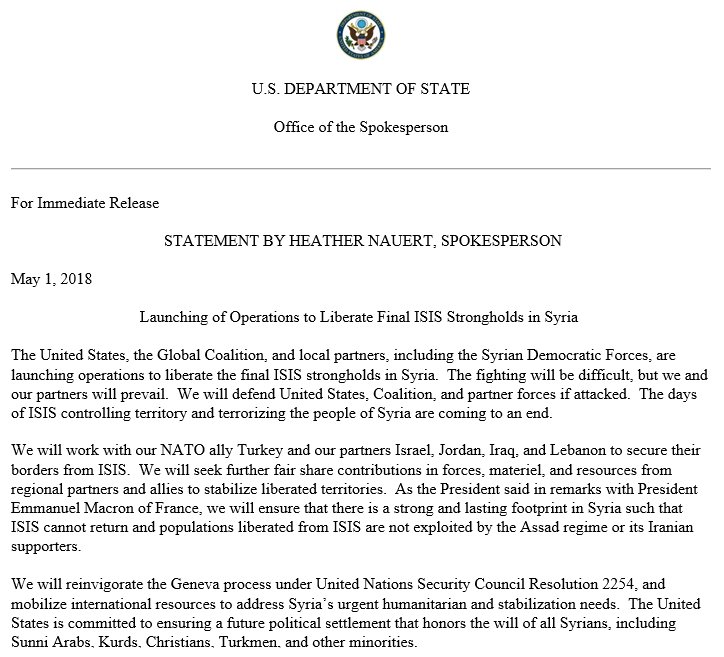 The administration of “Silo” Erbil on Monday for its distribution of dues of farmers while calling for those who handed over their crops of wheat and barley in 2017 to review to receive their dues.

The administration said in a statement, followed by the Iraqi Economic Center, that the amounts allocated to farmers’ crops for the year 2017 has arrived, “indicating that it began today to pay the financial dues for those farmers.

She explained that the amount is 11 billion and 601 million Iraqi dinars, noting that these amounts are distributed in the Bank of Arbil Castle and continue for two days.

[Where Follow-up]
announced that speaking US State Department spokesman, Heather Nanwirt, that the United States and the “coalition” and local partners in Syria have begun editing areas that are the last bastions of terrorist gangs in Syria Daesh process.
“The United States, the international coalition and local partners, including the Syrian Democratic Forces, are starting the process of liberating the last areas of Syria,” the spokeswoman said in a press release.
“We will protect the United States, the coalition and the partner forces in the event of an attack days days of control over the land, and the intimidation of the Syrian people is coming to an end.”
“The United States will work with Turkey, Israel, Jordan, Iraq and Lebanon to provide security for its border from a fugitive,” she said
http://www.alliraqnews.com/modules/news/article.php?storyid=73273

“The deputy head of the Kurdistan Regional Government, Qubad Talabani, on Tuesday, the possibility of resolving the outstanding problems between Baghdad and Erbil.

“The problems will be solved in Baghdad, not in Arbil,” Talabani said in a campaign for the Kurdistan National Union (PUK) list in the Balisan district of the Shaklawa district of Erbil. “The National Union is fighting for peace.

He also explained that the Patriotic Union of Kurdistan has good relations with the Iraqi parties and we can solve problems peacefully in Baghdad.

Talabani stressed on cutting the way for the parties trying to manipulate the future of the people of Kurdistan, stressing the need to introduce new blood into the ranks of the Patriotic Union of Kurdistan.

The elections are attended by (7187) candidates within (188) parties and (27) electoral coalitions competing in (18) governorates to obtain (328) seats in parliament, and the number of voters eligible to vote in the elections more than 24 million voters nationwide .

Kurdistan Prime Minister Nechervan Barzani said Tuesday that the Kurdistan Regional Partnership with Baghdad is important, pointing out that the Democratic Party will continue to demand the solution of the outstanding problems with Baghdad through dialogue.

“The Democratic Party will be in Baghdad to preserve the rights of Kurdistan and not to make empty conflicts on the ground,” said Barzani, who is deputy head of the party during a speech at a public rally in the framework of the party’s campaign in Shaqlawa northeast of Erbil. Television screens “.

Barzani said, “If the Kurdistan Democratic Party is strong in Baghdad, Kurdistan will also be strong,” stressing that “we have said previously and say now, we want to be united with the rest of the Kurdish parties in Baghdad and to preserve the unity of the Kurdish row.”

A spokesman for the victory coalition Hussein al-Adli said Tuesday that there are data and indications that the possibility of obtaining the head of the coalition Haider Abadi, a second term for the presidency of the Council of Ministers in Iraq.

Al-Adly told Ashqaf News that “according to the current data through the centers of studies and excuses, the coalition of victory and Abadi in the front of the lists.”

He added that “the admissibility of Abadi in running the country internally, regionally and internationally is likely to be Abadi preferred to take over a second term and will open to all forces”

In response to the statement of the sponsor of the alliance of Sadr’s followers, said al-Adli, “the credibility of Abadi and his experience is able to win the confidence of national partners”

He pointed out that “it is too early to resolve the issue of the prime minister,” but added that “in our belief Abadi has the qualifications to take over a second term through his success in the past four years to liberate the country and the management of state affairs.”

The leader of the Sadrist movement Moqtada al-Sadr said earlier in the day that it is too early to talk about the nomination of Prime Minister Haider Abadi for a second term to head the next government cab, which will result in the legislative elections scheduled for the coming days.

Earlier in a television interview, al-Sadr announced Abadi’s support for a second term as prime minister.

“We will announce this later,” Sadr said in response to a question on his position on Abadi’s support for a second term, saying that “it is still too early for the final opinion on this matter.”

secretary of the Economic and Financial Committee of the General Secretariat of the Council of Ministers, Qusay Abadi, said on Tuesday, on the occasion of the 77th anniversary of the establishment of the Rafidain Bank that the Secretariat is working to turn the deal into electronic payment and match developed countries.

The policy of the Council of Ministers is to implement the programs followed by the Rafidain Bank,” Abbadi told a news conference in Baghdad, attended by Al-Ghad Press. “The secretariat is working to turn the deal into electronic payment and to match developed countries.”

He added that “the system operated by the Secretariat General of the Council of Ministers is to develop the financial system and banking.”

The leader of the Sadrist movement Moqtada al-Sadr said on Tuesday that it is too early to talk about the nomination of Prime Minister Haider Abadi for a second term to head the next government cab, which will result in the legislative elections scheduled for the coming days.

Earlier in a television interview, al-Sadr announced Abadi’s support for a second term as prime minister.

“We will announce this later,” Sadr said in response to his position on Abadi’s support for a second term.

“The time is still too early for this final opinion,” he said.