An official source at the company briefed participants on the stages of the economic life of the family and the national economy by relying on financial inclusion, and presented successful global experiences in this important chapter and how some economies have been able to achieve important successes through financial inclusion.

The source pointed out that the participants interacted with this step, where there was consensus on the importance of working towards spreading awareness among the community about financial inclusion and its role in achieving development for all segments of society and in all cities and towns.

He pointed out that the development of payment systems in Iraq has become an important necessity and this is continuing to be adopted in the coming period, as everyone knows that the requirements of the development of economic activity requires the adoption of the best global systems and harmony with them.

He pointed out that Keycard understands that financial inclusion will impose itself when banking culture is an important part of an individual’s life. In order to support this step, we need to provide infrastructure for different sectors to facilitate easy and easy access to the city or village.

In addition to the decisions of the Kuwait Conference, a number of investors from all over the world gathered in Baghdad to present their investment projects for the reconstruction of Iraq under the umbrella of the General Secretariat of the Council of Ministers, which aims to create a fertile environment for investors and enact legislation to facilitate the routine procedures that hinder the work of investors in the country.

“We must prepare an investment map, what is the geography of investment in Iraq and what priorities we need, we need to rebuild the infrastructure, especially in the areas that the income has been encouraging,” said Riyadh al-Adadh, head of the Baghdad Provincial Council.

The Iraqi government recently focused on increasing investment opportunities in the country to reconstruct the affected areas by providing an environment conducive to them, represented by the security situation and remove abuses that hinder the work of investors.

A delegation from the US Transportation Administration (TSA) visited Baghdad International Airport to inspect the level of the security team and its procedures, a security source said Saturday.

The source told Al-Ghad Press that “the visit of the US security team to Baghdad airport came to see the security situation in it, in order to open a flight line that runs flights directly from Baghdad to New York City,” noting that “the Director General of the Civil Aviation Authority is who was receiving The US security team. “

“The US team will present a detailed report to the US Transportation Security Administration at the end of its tour on the level of security procedures followed at Baghdad International Airport,” he said.

Abadi arrives in Baquba from Kirkuk 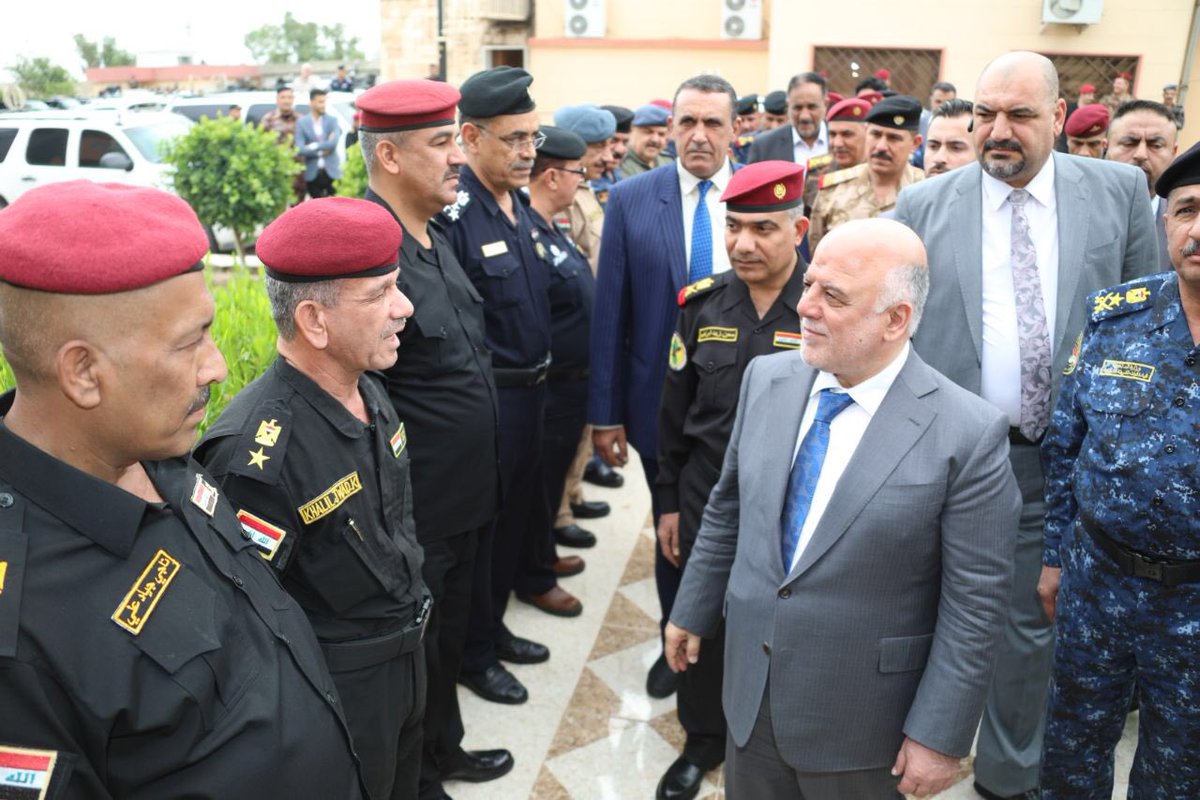 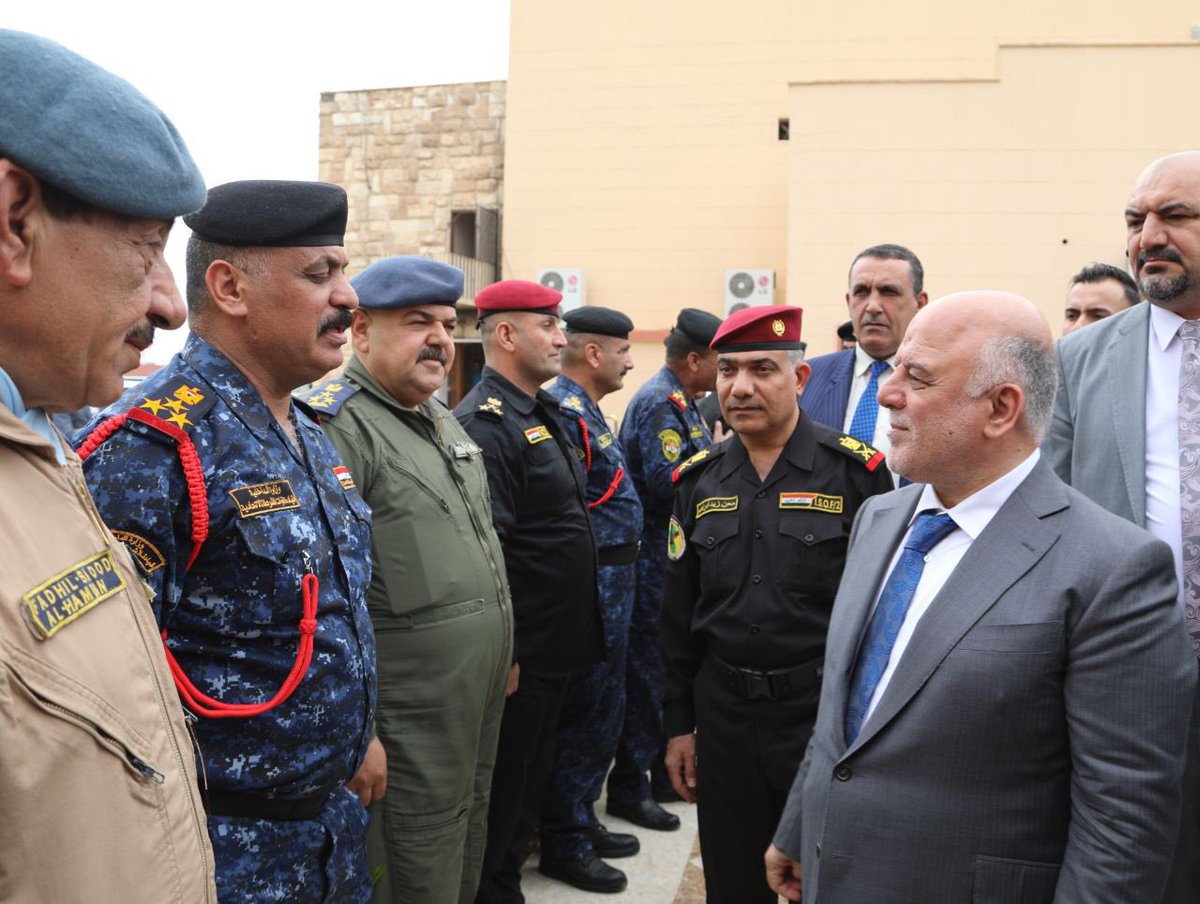 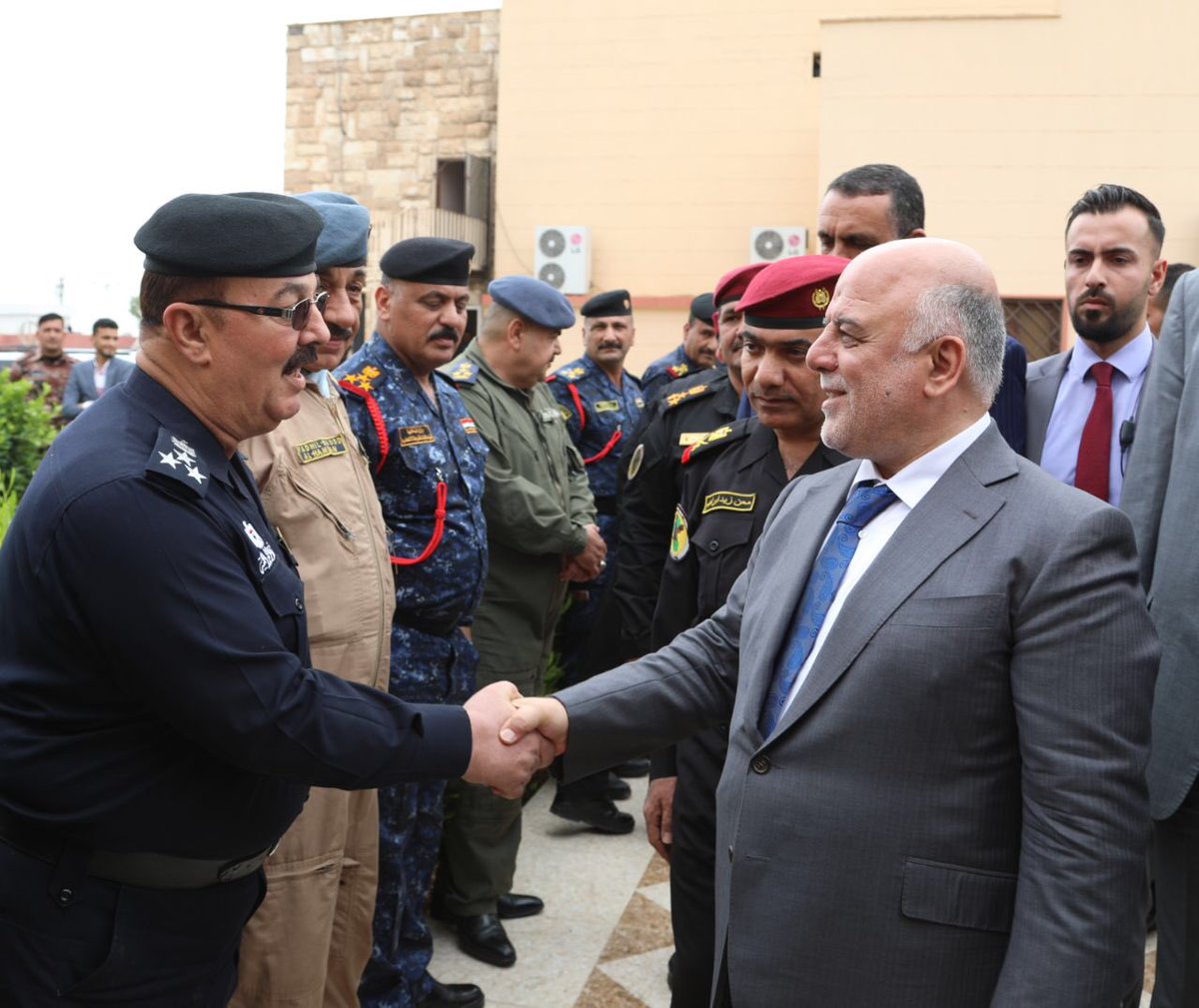 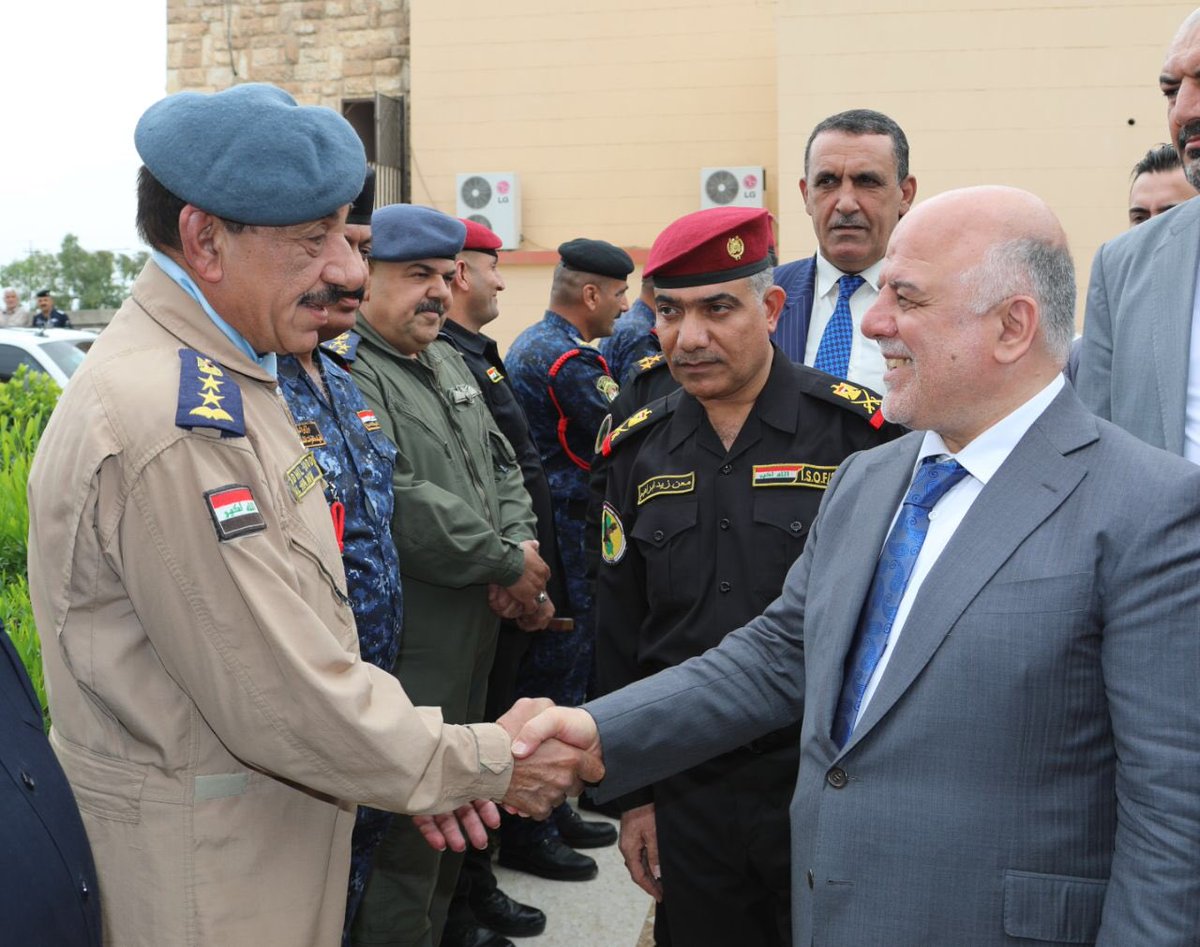 Twilight News / According to the annual schedule of official holidays headquarters by the Kurdistan Regional Government, one May Labor Day including.

The next Tuesday will coincide with this occasion and will be an official holiday in all government departments and institutions in the Kurdistan Region.

US Secretary of State Mike Pompeo is to start a tour of the Middle East, including the United States’ biggest ally, on Saturday to give “new impetus” to US diplomacy.

The news agency Agence France Presse that after participating in talks within the framework of NATO in Brussels, leaves on a three-day tour in Saudi Arabia, Israel and Jordan to present plans of US President Donald Trump on the Iranian nuclear agreement to these three friendly countries.

Pompeo insists Trump has not yet decided his decision, but is likely to decide his country’s withdrawal from the deal next month, paving the way for a re-imposition of sanctions on Tehran’s nuclear program.

The former director of the CIA, who was sworn in as the top US diplomat last Tuesday, will hold consultations with Iran’s main foes in the region before Trump announces his decision.

This task, however, is accompanied by a second task of a personal nature. Pompeo intends to prove to foreign capitals and to his colleagues themselves the return of American diplomacy after the austerity of his predecessor, Rex Tilerson, before his dismissal.

What contributed to this was that the former foreign minister from the world of oil companies did not fill senior positions in his ministry and embarked on bureaucratic reforms that were not supported and, most importantly, he did not agree with the president.

Pompeo, a former officer, businessman and conservative member of Congress, was keen to take up the job right after he was sworn in and chose to inaugurate his term with talks with NATO and Middle East allies.

During his confirmation process, his critics referred to earlier statements against Islam and gay marriage, arguing that this does not qualify him to represent American values ​​abroad.

But there is optimism among the officials accompanying him on his tour that US diplomacy has finally become a president who can speak on behalf of the White House and will focus on the core functions of the ministry.

Pompeo was in Riyadh on Saturday for talks with his counterpart Adel al-Jubeir before Crown Prince Mohammed bin Salman met at a dinner table.

The Kurdistan Democratic Party (KDP), headed by Masoud Barzani, said on Saturday that the Kurdistan Regional Government (KRG) is seeking to improve relations with all countries and neighboring countries during the coming period.

“The external moves by the Kurdistan Regional Government (KRG) on the restoration of relations with Washington, Tehran, Ankara and all other countries are coming to rearrange the situation of the Kurdish house after the referendum,” MP Najiba Najib said in a statement.

Najib added that “the survival of the Kurdistan region within one Iraq, an international will can not be ignored has been imposed on us internationally and regionally and this is what the Kurds are currently trying to stay under the shadow of the Baghdad administration consistent with the aspirations of the people of the region.”

“The visit of the Kurdish delegation to Washington is necessary to support the interests of the region in Iraq, especially the financial support of the Peshmerga forces and economic support in what will be visits to most neighboring countries to improve relations and restore things to normal.” Ending / 25 d

A senior member of the US Congress said on Saturday that the Kurdish people had already gained independence once the majority voted in favor of the referendum, noting that the treatment of new Foreign Minister Mike Pompeo would differ from that of his predecessors on the Kurds.

K24 quoted Deputy King Steve King as saying Washington should have “fulfilled” the referendum, which put the Kurds just around the corner from declaring their state.

“The Kurdish people have gained their independence by defending themselves and by defending others who need them in both Iraq and Syria,” he said.

King said that the Kurds have a unique language and culture and they are connected people and succeeded in providing security and stability in the Kurdistan region, which “deserves self-determination.”

He pointed out that it is the “only” area in Iraq where it is possible to walk in the street in a civilized and safe way.

He said he had a good personal relationship with the new US Secretary of State, Mike Pompeo, 16 years ago and that he had discussed with him on many occasions the status of the region.

“I have served with him in Congress for many years and I look forward to having discussions with him” in the future, he said, adding that his treatment would differ from that of his predecessors over the Kurds.

He explained that his relationship with National Security Adviser John Bolton was good and that they discussed “maps” of the world at a previous meeting held in his office.

“I look forward to holding talks with Pompeo and Bolton to discuss whether we can have constructive discussions on how to help the Kurdish people,” he said.

Some 93 percent of the Kurds voted for independence in the September 25 referendum, which Baghdad strongly opposed.

During a meeting attended by Deputy Prime Minister of Kurdistan Region, Qubad Talabani, the delegation highly appreciated the steps taken by the Kurdistan Regional Government to normalize the situation with Baghdad and rebuild the confidence between the two sides, expressing hope for a more serious dialogue to solve the problems. The Kurdish party, a role in forming a broad-based government after the next elections.

The delegation also said that Britain attaches great importance to its relations with the Kurdistan Region, especially in the areas of training, training and military assistance to the Peshmerga, and the development of the economy and investment of capital.

He considered it necessary to support the allies and Britain to implement the reforms in Iraq in general and in the province of Kurdistan in particular.

On the other side of the meeting, the two sides discussed the conditions of the region and the elections in Iraq and the Kurdistan Region.