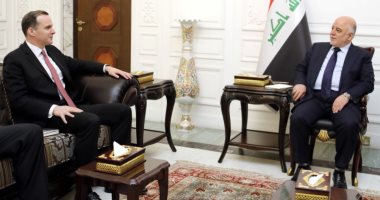 Iraqi Prime Minister Haidar al-Abadi stressed on the importance of stability in the region and the prevention of the causes of tension and focus on ending terrorism, while the special envoy of US President Brett McCork said that Iraq is now heading in the right direction .

“Prime Minister Haidar al-Abbadi received on Tuesday the special envoy of US President Brett McCurk and the official of the file of Iraq and Iran affairs in the United States of America Andrew Beck and the US ambassador to Iraq, Douglas Seelman,” the office of Al-Abbadi said in a statement published by Alsumaria News. During the meeting discussed the relations between the two countries and political developments, security and economic and the stage of construction and reconstruction in Iraq and the situation in the region and eliminate the remaining cells of terrorist gangs .

“The insistence of Iraq on the success of the unification of Iraqis towards the goal of reconstruction and provide a climate conducive to investment,” stressed Abadi, “the importance of stability in the region and to prevent the causes of tension and focus on ending terrorism .”

For his part, said Brett McCork that “the United States believes that Iraq is now moving in the right direction,” stressing that “his country’s support for Iraq in the stage of reconstruction and construction and strengthen security .”

“The United States supports and supports Iraq’s position on the need to end remaining pockets of Syria and fortify the Iraqi border from infiltration attempts by terrorists, ” McCork said. 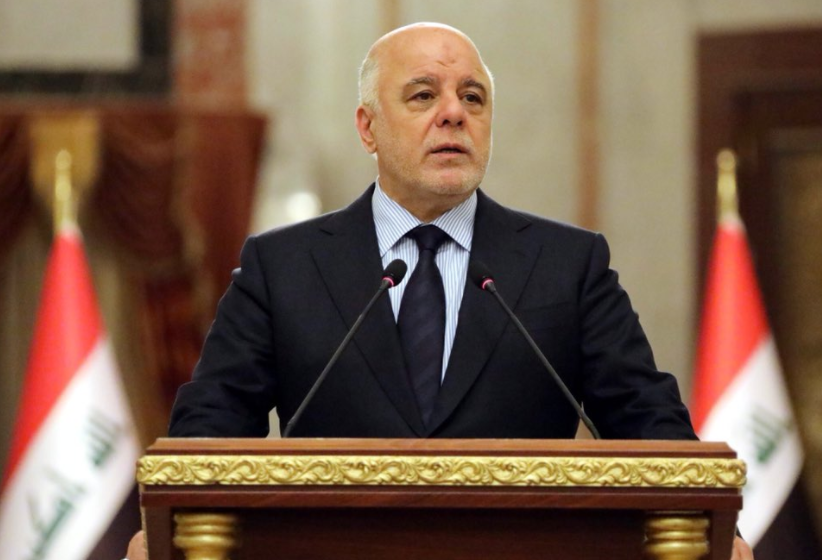 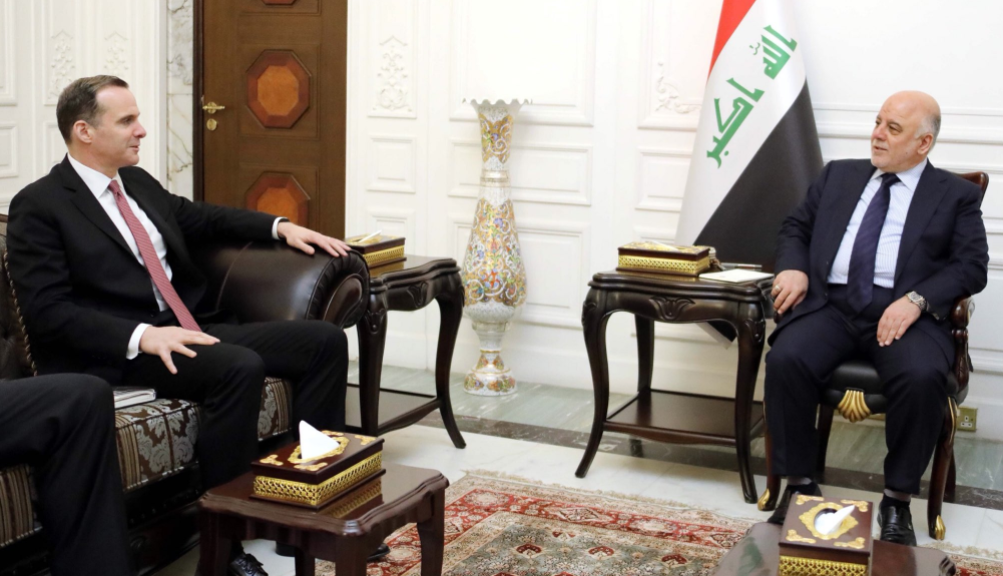 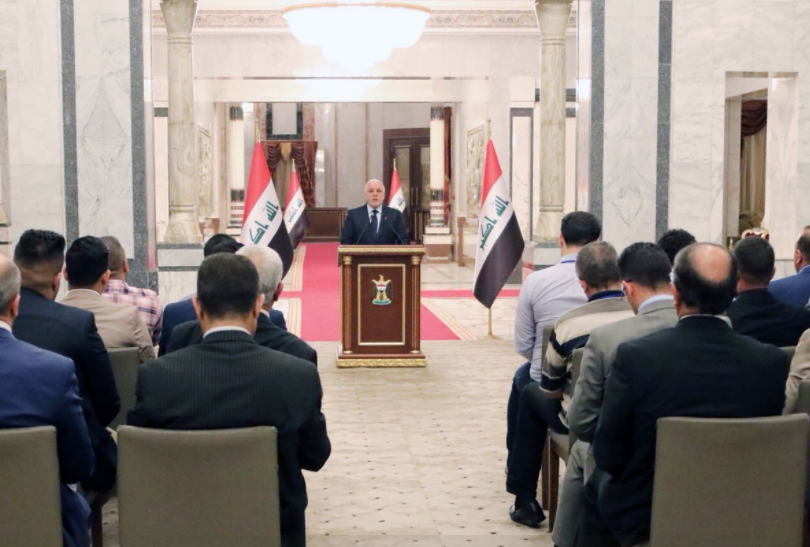 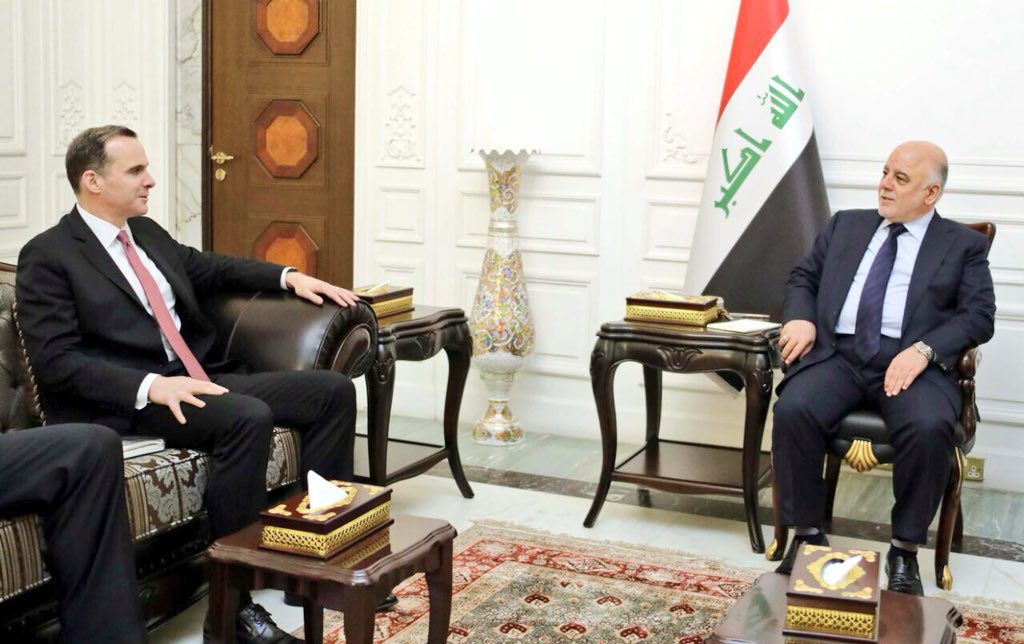 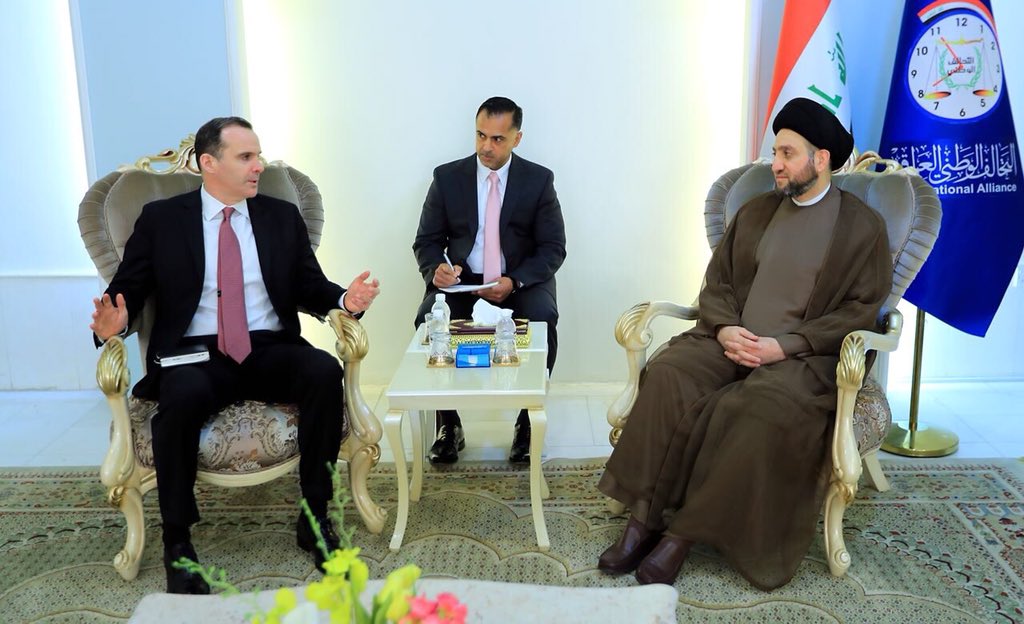 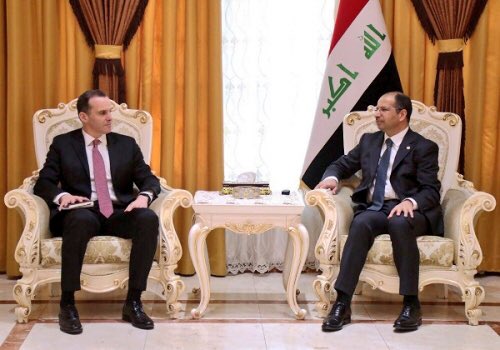 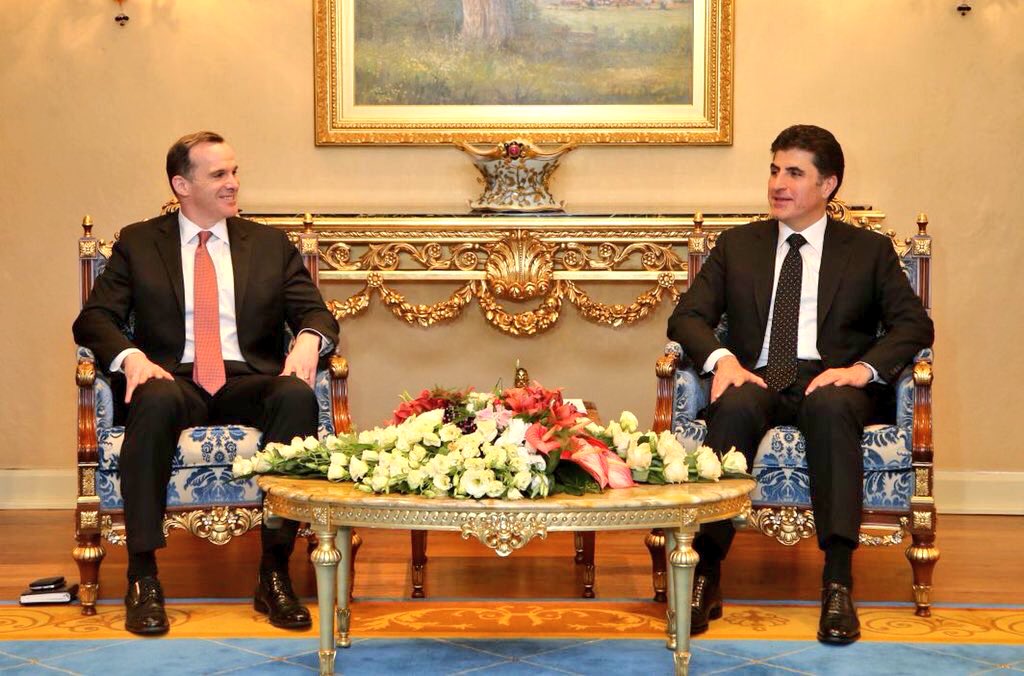 ERBIL — Kurdistan Region Prime Minister Nechirvan Barzani on Tuesday received a US high-level delegation headed by Brett McGurk, the special US presidential envoy to the anti-Islamic State (IS) coalition, discussing the latest political and security developments in the region.

The US delegation welcomed recent dialogues between Erbil and Baghdad which has resulted in easing tensions between the sides, encouraging both the Kurdistan Region and Iraqi government to continue constructive talks to resolve remaining disputes.

The guests also highlighted the ties between Erbil and Washington, pledging to work to further strengthen the relations.

Barzani, in return, thanked the US government and diplomatic mission for helping Erbil and Baghdad in finding common ground for dialogue.

The Council of Ministers, during its regular session chaired by President Haider Abadi, on Tuesday, a number of resolutions, while voted on the establishment of industrial cities model, and the issue of investors accumulated the benefits of loans and insolvent payment because of the failure of their projects for reasons beyond their control.

The Prime Minister’s Office said in a statement received, “The Council of Ministers held its ordinary session, headed by Prime Minister Haider Abadi,” noting that “Abadi, briefed on the report of the Office of the unified financial control of revenues and expenditures realized outside the budget and development program Regions for Local Governments for the years 2015-2016 “.

The statement added that “the Council of Ministers voted on the establishment of industrial cities model,” noting that “was also voted on the annex to the Executive Agreement Memorandum of Understanding between the Ministry of Commerce and the US side to buy and processing rice.”

The Council of Ministers, in accordance with the statement, “the Secretariat of the Council of Ministers and the Prime Minister and the Ministry of Health and the Ministry of Higher Education to submit a draft resolution on the subject of graduates of colleges and health and medical institutes with a comparative table of the numbers of graduates will be presented during the next session,” while voting on the ” The recommendation of the Energy Committee on the transfer of service contract for the field east of Baghdad – the southern part between the Central Oil Company and the Chinese company “Gehna”.

The Board approved the recommendations of the Economic Commission on Development Fund’s (canceled) clients’ equity of the private industrial sector, pointing to “resolving the issue of the accumulated investors on the interest of loans and insolvent creditors due to the failure of their projects for reasons beyond their control.”

“The Iraqi Trade Bank (TBI) has activated the loan contract of Al-Zawraa General Company of the Ministry of Industry and Minerals for the purpose of executing the contract signed by the aforementioned company with the Ministry of Electricity to equip it with electricity stations to serve the liberated areas.”

The Council of Ministers, on Tuesday of each week, a regular session, chaired by its President Haider Abadi, to discuss and vote on a set of laws included in its agenda. Ended 29/6 N

“We launched a security operation in the Al-Jazeera and Upper Euphrates region,” Abadi told the weekly conference, referring to the reason for “preventing the establishment of terrorist groups.”

“Our recent actions against spoilers are a clear message to hunt down those wanted,” he said.

It is noteworthy that a number of Iraqi provinces have recently witnessed security breaches, especially in Kirkuk, Salahaddin, Diyala, Anbar and Nineveh.

The security forces responded to these violations by carrying out security campaigns to arrest elements of the organization.

BAGHDAD (AFP) – The head of the National Alliance, Mr. Ammar al-Hakim, discussed with his US envoy to the United States, Brigitte McGröck, accompanied by US Deputy Secretary of State Andropik and US Ambassador to Iraq Douglas Silliman on Tuesday the latest regional and international developments and security and political developments. Iraq.

A statement for the presidency of the coalition received the agency {Euphrates News} a copy of it, Mr. Ammar al-Hakim, “noted during the meeting to the priority of the existence of a clear program for the next phase resulting in a government of service consistent on the basis of the majority of the national and within the constitutional time and the will of the Iraqis.”

He renewed his support for the national equation, which includes the unity of Iraq and the adoption of institutions and achieve economic development and fight corruption and provide service to people and build positive relations with the region and the world and avoid Iraq the effects of conflicts.

In the regional affairs, the head of the National Alliance said that “recent developments threaten security and peace in the region,” expressing his fears for Iraq to be affected by some aberrations and affect the stability, calling for the adoption of the language of dialogue and understanding to address the problems.

“The Kurdistan Region Council of Ministers held on Tuesday afternoon its regular meeting in the presence of Prime Minister Najran Barzani.

The statement added that the first paragraph of the meeting of the Council of Ministers confirmed the continuation of the process of registering the role built by bypassing the lands of municipalities in real estate registration departments, in accordance with the controls and decisions recently issued by the Presidency of the Council of Ministers, which came into force. The Council of Ministers also approved another draft legislative decision concerning other cases of expropriation of state lands that have been overrun within municipal boundaries for housing purposes.

The statement pointed out that the ratification of this draft resolution on the basis of the keenness of the territorial government on the conditions of low-income people, who went beyond the forced and built their role on state property, taking into account the benefits and provide the necessary conditions, which was referred to in the resolution. The Ministry of Municipalities and Tourism has been working on this project for some time, and it has been decided to submit it to the Parliament of Kurdistan for approval.

He pointed out that after that the Council of Ministers approved a draft law to solve the problem of excesses on agricultural and rock land allocated to forests and pastures, which was prepared by a joint high committee of ministries and stakeholders, and was submitted to Parliament for approval.

The Ministry of Trade and Industry’s proposal for the enforcement of the Federal Industrial Investment Act in the private and mixed sectors of 1998 and the Federal National Products Protection Act of 2010, which will play an active role in the development of investment in the industrial sector and at the same time support domestic products, In the Kurdistan Region.

BAGHDAD (Reuters) – Speaker of the House of Representatives Salim al-Jubouri discussed with US President Donald Trump’s envoy the joint coordination between Iraq and the United States in anti-terrorism and reconstruction files.

“Speaker of the House of Representatives Salim al-Jubouri received on Tuesday US President George W. Bush’s envoy, Bert McCork, in the presence of US Ambassador Douglas Silliman.” During the meeting, he discussed the latest security and political developments on the local and regional arenas, Between Iraq and the United States of America in my counter-terrorism and reconstruction. ”

The statement quoted Jubouri as saying that “Iraq needs to mobilize all international and local efforts to ensure the participation of everyone in the voting process, especially displaced families in the shelter camps and citizens of cities liberated from the control of terrorism,” stressing the “importance of overcoming all the obstacles that prevent Iraqis exercise their right to choose Their representatives in the next parliament. ”

“The speaker of the House of Representatives praised the efforts of the United States of America to support Iraq and its people, whether in its war against terrorism or humanitarian and relief assistance to the displaced,” the statement said.

“The United States continues to support Iraq on all levels,” said McCormack, who praised the efforts of the House Speaker to strengthen the pillars of democracy in the country.