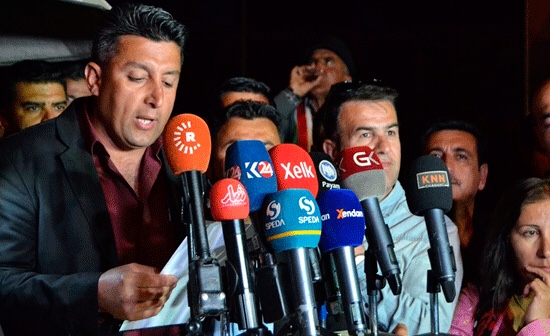 The new stance of the protesters came at a press conference held Monday evening in Sulaymaniyah on ending the boycott and returning to school, and teachers and teachers were told to return permanently.

The protesters demanded the Kurdistan Regional Government to determine the date of distribution of salaries of employees and to be distributed monthly on schedule and also to find a mechanism to determine how to return the amounts of mandatory savings for staff and to direct this request to the government and the Parliament of Kurdistan.

On the other hand, the Director-General of Sulaymaniyah Sulaimaniya education Dalshad Omar told a news conference on Monday, the dangers of disrupting the educational process in Sulaymaniyah and demanded the teachers to return to the seats and take responsibility for maintaining the process.

A statement by the protesting teachers pointed out that the demonstrations on Tuesday will be before the Sulaymaniyah court.

(Baghdad: al-Furat News) Interior Minister Qassim al-Araji revealed on Monday an Iraqi-Saudi-Kuwaiti-Jordanian military agreement.
Al-Araji said in a press statement during the opening of a factory for the leadership of the border war in Karbala, that the four-party agreement will include securing the common border within the plan to manage the security file in the post after the terrorist.
Araji said: “The post-urging requires us to control the border, and activate the role of intelligence, and there is cooperation with Saudi Arabia, Kuwait and Jordan, in this area.”
“2018 will be a year of support for border guards and intelligence, and open cooperation with all countries,” he said.
The Interior Ministry is working to secure the atmosphere of the elections and protect its candidates, especially as it will not be loyal to any party or entity or candidate. ”
http://alforatnews.com/modules/news/article.php?storyid=162387

BAGHDAD –
A political source disclosed on Monday the date of Prime Minister Haider Abadi’s visit to the Japanese capital Tokyo.

“Abadi will leave Baghdad tonight for the Japanese capital Tokyo, accompanied by two ministers and economic advisors,” the source told The Daily News.

The source added that “Abadi will discuss in Japan investment files, partnership and economic cooperation and attend a conference to create jobs in Iraq.”

The Iraq stock market index has risen about 10 percent since the beginning of 2018, ahead of other similar markets, making it among the top 10 markets in the world, according to the Morgan Stanley Index.
According to the Wall Street Journal, Iraq’s financial market, in the upscale Mansour district of Baghdad, has defied the violent volatility that hit global markets this year.
Shares in listed companies are among the best performing companies in the world in the first quarter of this year, the paper said.
Investors are betting on the country’s economic recovery after defeating ISIS in a three-year war that destroyed large parts of the infrastructure, causing damage to those companies over the past period.
“Iraq is like other early markets, such as post-Soviet Russia and others, which have done well for investors,” said Grant Philgenhauer, director of the Furat Consulting Foundation, which runs the Iraq-Euphrates Fund.
“The fund has invested $ 130 million in the Iraqi securities market and has risen more than 31 percent in the first quarter of 2018,” he said.
The Iraqi stock market has a market value of about $ 10 billion, relatively small compared to other similar markets such as Argentina and Vietnam, and even regional markets in Saudi Arabia and Kuwait.

Prime Minister of the Armed Forces, General Haider al-Abadi, on Monday attended a military parade marking the third anniversary of the liberation of Tikrit.

“The Prime Minister and Commander-in-Chief of the Armed Forces, Haider al-Abadi, attended today a military parade at the Tikrit Stadium on the occasion of the third anniversary of the liberation of the city,” Abadi’s office said in a brief statement.

The Prime Minister Haider Abadi, earlier in the day, to the city of Tikrit, the center of Salahaddin province, and invited Abadi, during his visit to the University of Tikrit not to forget the sacrifices that contributed to the liberation of Salahuddin.

He also stressed during his meeting with the governor and the President and members of the provincial council and security leaders on the return of displaced persons and the completion of all service and health projects in Salah al-Din. 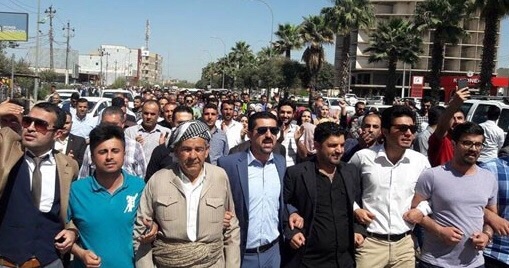 The cities of the Kurdistan region for the ninth day in a row, demonstrations against the law of saving salaries.

The source said in a press statement that for the ninth day in a row continue demonstrations in the cities of the Kurdistan region in Sulaymaniyah, Quesengq, Halabja, Kifri, Kalar and Rania to demand the abolition of the savings system permanently.

The source added that the protests come despite the government’s promises to pay salaries according to the new system of savings during the next two days.

“As part of our approach to reconstruction and investment, we will visit Japan this week at the invitation of its government to affirm partnership, cooperation and job creation for Iraqis,” Abadi said at a press conference Sunday.

“There is great Japanese enthusiasm in terms of job opportunities for their vast experience in this field and we look forward to making our visit to Japan a success,” he said. 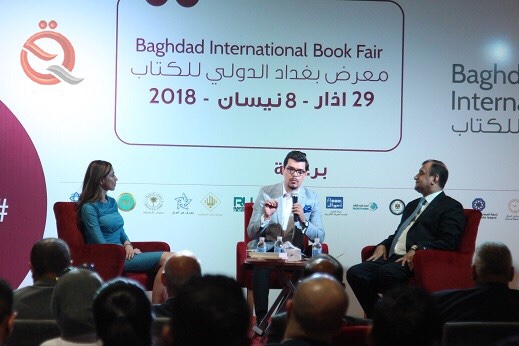 Director of the Central Bank, Saleh Mahoud, announced that the Central Bank has a great role in achieving economic development in Iraq through the community initiatives implemented by the loans granted.

“The Central Bank, in cooperation with the Association of Iraqi Private Banks, has launched several social initiatives, including Baghdad to rehabilitate 20 theaters in Baghdad and our people’s campaign to care for and support displaced people and support drama,” Mahood said at a seminar organized by the Baghdad International Book Fair to discuss social initiatives. Iraqi and the Book Fair and others, “noting that” community initiatives come within the amendments that occurred in the law of the Central Bank. ”

He pointed out that “the Central Bank has become an important tool in the process of economic development and translated through the provision of industrial loans, commercial and residential,” explaining that “the Central Bank is aware of the importance of social responsibility to develop a complete road plan in support of community projects.”

“The oil markets are still nervous about whether or not the US administration will break the fragile nuclear agreement with Iran,” Steven Inies of Singapore’s brokerage firm INDA said.

He said a weekly report indicated a decline in drilling activity in search of new oil discoveries in the United States boosted prices.

Baker Hughes Energy Services said in its closely watched report on Thursday that the number of oil rigs dropped seven rigs to 797 diggers in the week ending March 29.

It was the first time in three weeks that the number of rigs had dropped.

Baker Hughes published its report on the number of dredgers in North America on Thursday, a day ahead of schedule due to the great Friday holiday on March 30. End