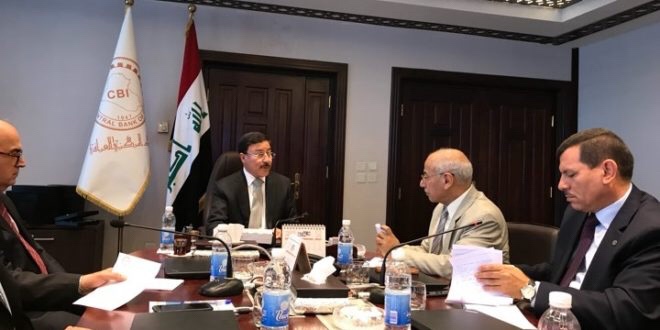 The governor of the Central Bank of Iraq, Ali Alalak, the rise of Iraq’s foreign currency reserves to 51.5 billion dollars.

“The foreign reserves rose to $ 51.5 billion this year because the central bank did not buy treasury bills,” al-Alak said in a meeting with a number of local newspaper editors and news agencies. “The central bank has gone a long way in managing foreign reserves and we are starting to generate returns Finance by investing gold abroad. ”

He pointed out that “the central bank was able to restore the independence that he lost since 1980 to the government in addition to controlling inflation, which reached 40% before 2003 and now 4%.”

“The stability of the banking sector is an essential objective to achieve financial stability and curb inflation,” he said.

He explained that “the system of payments in the Central Bank is one of the most advanced systems in the world and estimated transactions carried out monthly 14 trillion dinars did not face any violation.

(Baghdad: Al Furat News) The House of Representatives will hold the morning of tomorrow, the first sessions of the last week before the deputies devote to the campaign, which is scheduled to begin on the tenth of April.
The session will be devoted tomorrow to vote on 15 draft law ready to vote, which had been included in the previous sessions, but the lack of completeness prevented the vote on it.
Although the end of the life of the current House of Representatives ends on June 30, the start of the election campaign and near the parliamentary elections will prevent the extension of the legislative term to be the meetings this past week.
The general elections will be held on May 12, while the election campaign will begin on the tenth of next April
https://translate.googleusercontent.com/translate_c?depth=1&hl=en&rurl=translate.google.com&sl=ar&sp=nmt4&tl=en&u=http://alforatnews.com/modules/news/article.php%3Fstoryid%3D161984&xid=17259,15700021,15700105,15700124,15700149,15700168,15700173,15700186,15700201&usg=ALkJrhj_HrngmSGQEZP2IBjXfZcBUDq8Wg

An informed source told Twilight News that the council would hold a “crucial and important” meeting on Thursday on compulsory savings and the problem of salaries.

The source added that the council will discuss the demonstrations of teachers and teachers and the boycott of medical staff for the official time in hospitals in some provinces of the region.

Twilight News
14 minutes ago
The Iranian currency fell to its lowest level on Monday, as the dollar peaked above 50,000 riyals for the first time, while analysts said this was due to the stern US position on Tehran.

The riyal lost about a quarter of its value in the last six months to reach $ 50,860 riyals, according to the Financial Information Market, a reliable website tracking open market volatility.

The gap continued to widen with the official exchange rate of 37686 riyals on Monday.

The Iranian government took tough measures last month to stem the devaluation of the local currency on the open market, where it arrested foreign currency traders, froze speculators’ accounts, raised interest rates and bought millions of dollars in an effort to curb its rise.

Many analysts believe the United States will withdraw from the nuclear deal reached with Iran in 2015 when it is due to be renewed in May, which means re-imposing sanctions, which have greatly affected the Iranian economy.

Iranian officials have complained that citizens are racking up billions of dollars at a time when local banks are short of liquidity.

The devaluation of the currency is a key problem for the government of President Hassan Rowhani, who was hoping to attract large foreign investment after the nuclear deal.

The collapse of the currency would be another expulsive factor for potential investors, who already face major hurdles as a result of US sanctions unrelated to the remaining nuclear file.

The Ministry of Finance and Economy in the Kurdistan Regional Government has allocated financial aid and grants to the Ministry of Health, hospitals and medical centers.

According to the document, the amount allocated is 4 billion, and 100 million Iraqi dinars.

See the text of the document written in Kurdish below:

MP Abdalbari Zebari said that the Kurdish blocs will participate in the meeting, on Tuesday, if the discussion is discussed on the draft federal budget law for the year 2018.

The MP for the Patriotic Union of Kurdistan Abdul-Bari Zebari during a press statement that the Kurdish blocs will participate in the meeting, on Tuesday, if the discussion was discussed President of the Republic on the draft federal budget law for the year 2018, which sent to the House of Representatives.

He added: If the remarks of the President of the Republic will not be discussed on the draft budget law, the Kurdish blocs will have a different position has been interrupted session.

A source in the Ministry of Finance of the Kurdistan Regional Government said Friday that the ministry will announce during the next two days a new schedule for the distribution of salaries of ministries.

It is worth mentioning that the employees of many ministries have not received until now the salaries of the month of November 2017.

The source, who declined to be named in a statement to “Khandan”, said that the Ministry of Finance will announce during the next two days the date of payment of salaries of all ministries. 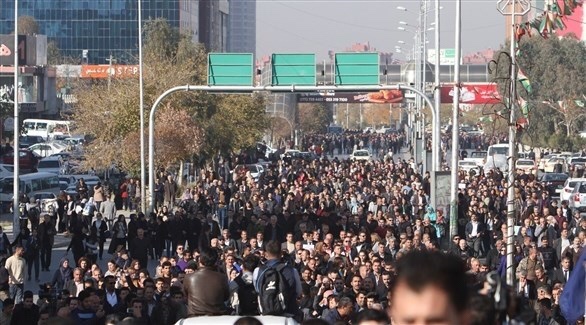 The second consecutive day of protests in various cities and towns of the Kurdistan region to demand the abolition of the compulsory saving system for salaries of employees.

The city of Arbil witnessed demonstrations in which the demonstrators tried to go to the Parliament of Kurdistan, while the security forces deployed heavily.

Demonstrators in the district of Soran, north of Arbil, demonstrated in front of the Directorate of Education, raising slogans demanding that Prime Minister Haider Abadi fulfill his promises and stressed that they had lost confidence in the Iraqi government.

The security forces arrested the head of the branch of the Union of Teachers of Kurdistan in the district of Soran, and a number of other teachers during the demonstration.

So far no official explanation has been given by official and security authorities about the arrests.

It is noteworthy that many cities and towns of the Kurdistan region saw on Sunday, protests against the system of government savings of salaries, and erected tents in the yards of sit-in in the city of Sulaymaniyah.

The sit-ins continue in the city and in a number of other cities.

The Kurdistan Regional Government announced the amendment of the system of saving staff according to a new system, in the event that Baghdad committed to send the amount of 317 billion and 540 million and 465 thousand Iraqi dinars to the region.

And organized training and government officials demonstrations in several cities in Kurdistan to protest against the austerity measures followed by the provincial government since 2016, especially pay salaries after a financial crisis hit the region in 2014 as a result of the collapse of oil prices and cut Baghdad salaries paid to employees of Kurdistan.

Abadi had recently announced that his government will begin before the holiday of Noruz holidays pay salaries of employees of the province of Kurdistan, the monthly withdrawn several years ago; because of differences between Baghdad and Erbil.

The issue of salaries of the region’s employees is one of the outstanding issues between the federal government and the Kurdistan Region.

The escalation of the crisis between Baghdad and Erbil after the conduct of the Kurdistan Region referendum self-determination last September, and the subsequent actions taken by the Iraqi government and neighboring countries against the region, including the closure of border crossings and the prevention of air traffic.

However, these files found a way to resolve in turn, the impact of several contacts and meetings between the Iraqi Prime Minister Haider Abadi and the Prime Minister of Kurdistan Nechirvan Barzani