A statement issued by Al-Abadi’s office to the twilight news agency said that during the meeting, cooperation in the field of training, intelligence coordination, clearing operations and the prosecution of terrorist gangs continued.

General Voetel praised the capabilities and plans of the Iraqi forces, noting that Iraqi forces are taking seriously the remnants of terrorism. According to Abadi’s office statement.

This comes against the backdrop of the implementation of the “da’ash” on Saturday the execution of 8 elements of the federal police between the provinces of Salah al-Din and Diyala.

On March 20, the popular crowd announced the killing of 6 civilians and injuring 15, including children, as a result of ambushes by a group of “terrorists” on the road between Daquq and Tuzhurmatu.

On January 9, 2017, the Iraqi prime minister and commander-in-chief of the country’s armed forces, Haidar al-Abadi, announced the liberation of all of Iraq from the control of the Da’ash organization, which is classified as an international terrorist.

The Media the Office AMVerifiedAccount @ IraqiPMO7m 7 Minutes ago Not
More

During the meeting, the company discussed the work of the company in each of Rumaila North and South Kirkuk fields and the company’s plan for future work in the development of oil fields, which contributes to the implementation of the government’s vision for the oil sector in Iraq. 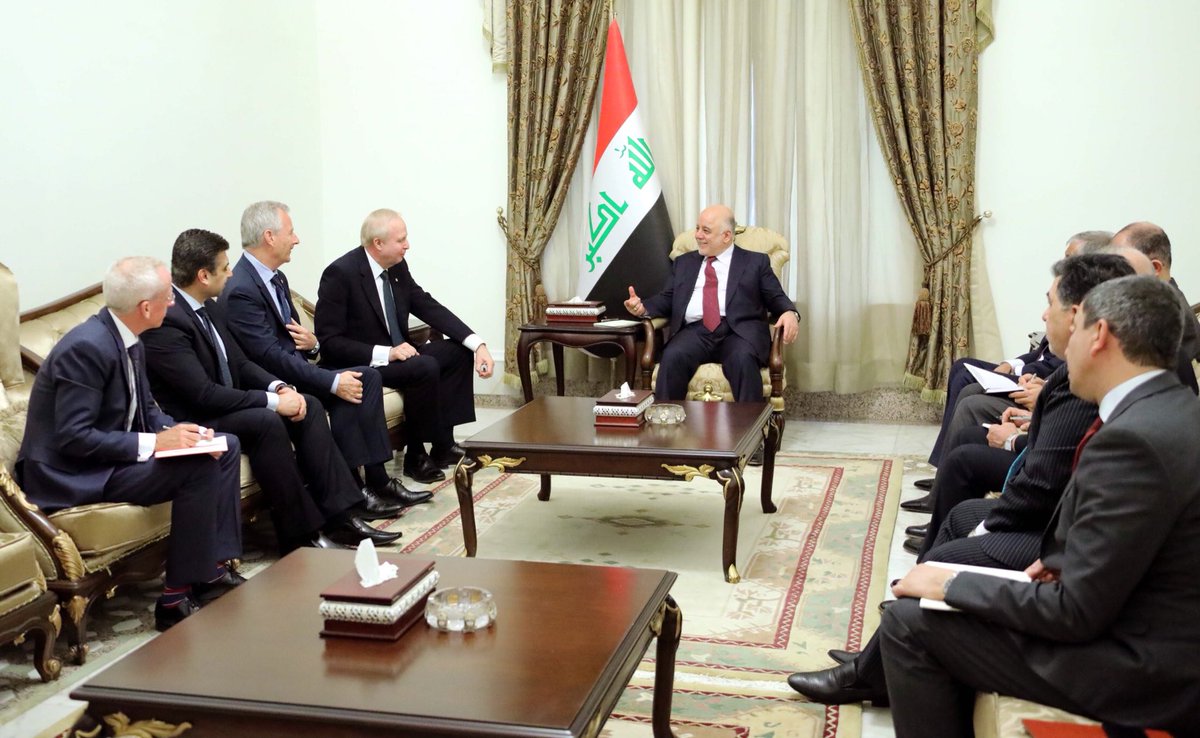 Baghdad / / .. The representative of a coalition of state law, Mohamed Chihod, on Sunday, the number of laws ready to vote in the meeting next Tuesday, corresponding to 27/3/2018.

“All the members of the House of Representatives to attend the session Tuesday to pass the remaining laws,” Chihod said, “noting that” about 20 laws ready to vote and its fate depends on the completion of the quorum at Tuesday’s session. “

He added that “we expect not to hold the meeting because of the absence of most of the deputies, for their concern in the election campaign for them and their families and parties.”

While called on the Speaker of the House of Representatives Salim Jubouri, on Saturday, members of Parliament to attend the meeting next Tuesday to complete legislation and important laws to be voted. Finished

The Presidency of the Republic in an official letter to the House of Representatives on the right of President Fuad Masum, in the failure to ratify the budget law for the year 2018 and returned to Parliament.

The President of the Republic Fouad Masoum, earlier, to approve the budget of 2018 because of contain “constitutional and legal irregularities,” as he put it.

It is noteworthy that the Speaker of the House of Representatives Salim al-Jubouri confirmed that the draft budget law became a law after the vote by the Council and any remarks can be confirmed on the origin of the law and challenged in the Federal Court.

The vice president of the republic, Iyad Allawi, attributed the reason for the re-election of President Fuad Masum to the parliament because it contains “constitutional irregularities.” He pointed out that he gave the Kurds 17% of the budget during his presidency of the Iraqi government for “the absence of a constitution and because of the Peshmerga” 29

Basra Governor Asaad al-Eidani said on Sunday that the local government does not bear the delay of the wages of cleaning workers in the province, noting that he is waiting for ratification of the budget to launch.

“The problem of delaying wages of workers in the cleaning did not occur in Basra only, but got in most of the provinces of Iraq because of the delay of the adoption of the General Budget 2018,” said Eidani in his tour, accompanied by “Al-Ghad Press”.

“The province has sent an official letter to the provincial council in Basra, demanding the transfer of some amounts to pay the wages of cleaning workers during the vote in the next session,” he said. “He is waiting for ratification of the general budget for the release of all wages.”

He said that “some people are trying to exploit this incident by launching unrealistic names on the crisis of delaying the wages of cleaning workers,” adding that “the local government does not bear at all delaying those wages.”

The national cleaning company in the province of Basra, announced the suspension of work in the provinces because of non-payment of wages of workers for three months.

The parliamentary legal committee, on Sunday, that the political pressure exerted by some blocks is an obstacle to the publication of the federal budget law in the official newspaper.

Committee member Sadik al-Laban told the agency, “There is political pressure to exercise the failure to publish the Federal Budget Law 2018 in the Official Gazette,” noting that “the budget law became constitutional after 15 days on the non-ratification of President Fuad Masum.”

He added that “some political forces are trying to provoke the Iraqi street through their practices to pressure partisan and racist not to publish the budget and activate it in all departments of the state.”

The parliamentary legal committee, earlier, that President Fuad Masum exceeded the legal period set for him by 15 days to ratify the budget law after sent to the Presidency of the Republic, noting that the budget has become constitutional in accordance with the law.

The member of the Legal Committee of the parliamentary high Nassif had confirmed earlier that the refusal of President Fuad Masoum to the federal budget “Shakly”, while it explained that the Constitution does not provide for his rejection of the budget. End 25 T

In 2014 @TIME magazine announced the end of Iraq. Iraq lost 40% of its territory, its economy was in freefall, and it was regionally & globally isolated #ThenAndNow

The leader of the Change Bloc Saber Ismail, Sunday, that the protesters of Arbil had the intention today to overthrow the “dictatorship government” in Kurdistan storming the headquarters of the presidency, calling Baghdad to intervene urgently and to instruct the region to cancel the system of salaries saved as a corrupt system.

Ismail said the “demonstrations today in Arbil exceptional and angry and very strong because of injustice and the rule of dictatorship, which took control of the Kurdish scene in the government of the region.”

“The demonstrators had intended to enter the presidential headquarters to overthrow the government, but they were unable because of the large number of weapons of Barzani forces,” he said, adding that “these forces dispersed and dispersed the demonstrations with the force of arms and sound bombs.”

Ismail said that “the bombs and bullets fired, wounding a number of demonstrators were taken to hospitals,” calling for “urgent international intervention.”

Ismail called on Baghdad to “intervene urgently and instruct the region to abolish the system of salaries saved as a corrupt system.”

The Patriotic Union of Kurdistan called on Sunday to open an urgent investigation by targeting the demonstrators in Erbil, demanding their rights, noting that the financial system in the provincial government needs to re-examine quickly and urgently to return the salaries of employees.

The province of Arbil, on Sunday, the injury of dozens of demonstrators from teachers and teaching staff as a result of the firing of live bullets and tear gas to disperse a demonstration demanding their salaries.

Oil prices closed on Saturday, rising to their highest level since late January, while Brent crude was above $ 70.
“It requires OPEC members to continue to coordinate with Russia and other non-OPEC producers in terms of supply restraints in 2019 to reduce global oil stocks,” Saudi Energy Minister Khalid al-Faleh said in a press statement.
Brent crude futures closed at $ 1.45, or 2.10 percent, to settle at $ 70.36 a barrel, while US WTI crude futures closed at $ 65.81 a barrel, up $ 1.51, or 2.35 percent.