“The move to lift the ban on the airports of the region is an excellent step,” said political analyst Nozad Pulse, indicating that the negotiations resulted in positive because of international pressure and at the same time there is a real intention to work between Baghdad and Arbil.

He stressed the need to solve the problem of salaries suffered by citizens in the region, “noting that  the main point is the issue of salaries of employees where this segment of Iraqi citizens suffer from the delay of payment and must Abadi to speed up the solution of this issue.

He added that tomorrow will arrive in Erbil salaries of health and education and should expedite the termination of this file.

“The reasons for the dispute between Baghdad and Erbil,” Article 140 is purely political matter, “the issue of disputed areas and a lot of economic issues.

Where Bolus said that the region was living well from 2003 to 2012, especially in 2012 reached a degree was comparable to neighboring countries, but after issues such as the budget and the impact on relations negatively between Baghdad and Arbil and increased negatively after the results of the referendum where was followed by the imposition of economic siege on the region.

With regard to the upcoming election, Bolus pointed out that there should be real steps to implement the slogans of coexistence between all Iraqis, stressing the need for Sunni, Shiite and Kurdish forces to join a comprehensive national dialogue.

Bolus called for the removal of Kurdish people’s rights from election propaganda.

The Media the Office AMVerifiedAccount @ IraqiPMO3h 3 Hours ago Not
More

Dr. Abadi: We have broken terrorism and we can establish a new structure and a strong country and we are coming to a new victory in reconstruction, stability and job creation. 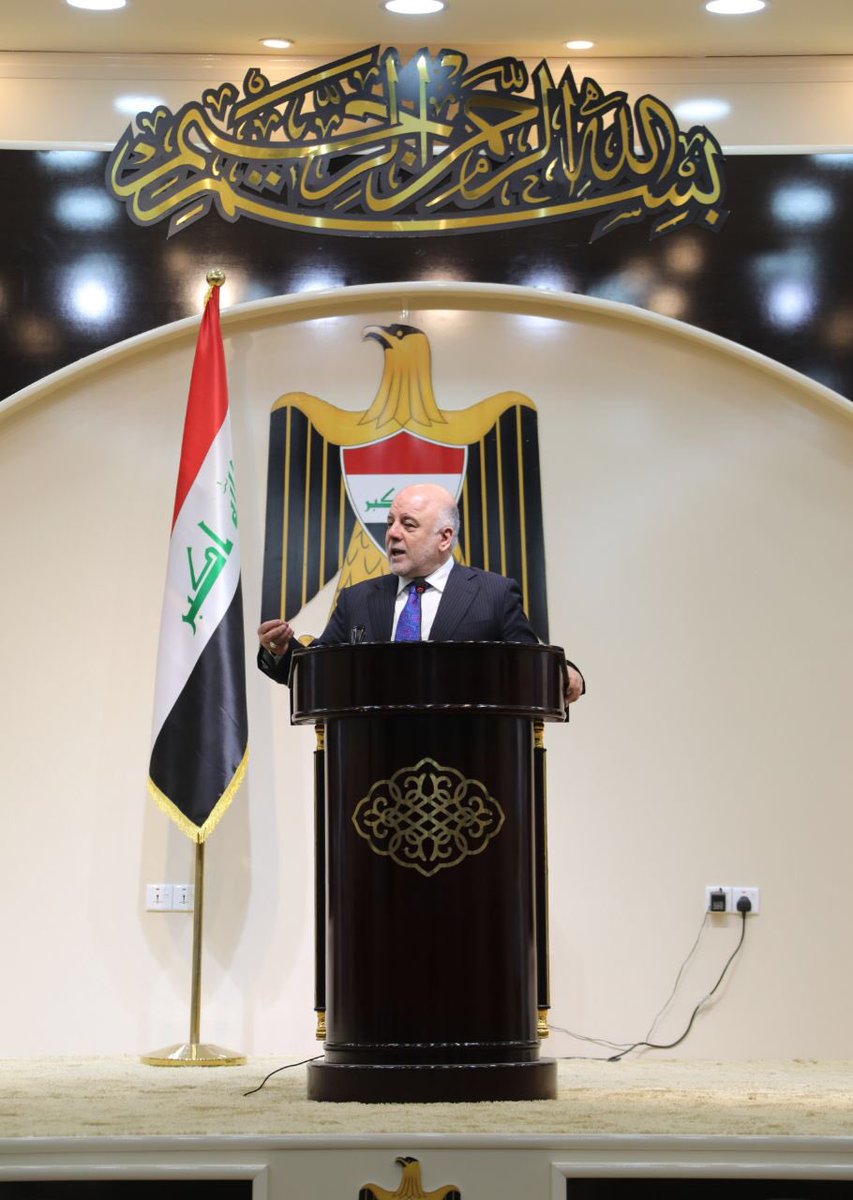 A member of the Committee on Economy and Investment parliamentary, Harith al-Harithi, Wednesday, that the next few days will witness the vote on the laws of a very important, while noting that among these laws the law of oil and gas.

Al-Harithi told Mawazine News that “the next few days will witness the completion of all the laws that are stalled reading and voting to end this few remaining period of parliament by reading the largest number of laws.”

He explained that “the important laws that will be read are the law of oil and gas for its economic importance and the revenues of the state and how to deal with it, in addition to the laws of parties and social security and health professions and many laws will be read and voted to end.

It is noteworthy that there is a package of laws in the House of Representatives because of the differences of political blocs around them, and was deported to several parliamentary sessions. Ended 29/6 N

The Iraqi Civil Aviation Authority (NTA) has issued an order to resume foreign flights at Arbil and Sulaymaniyah airports, the director of Arbil International Airport Telar Faiq said on Wednesday.

Fayek said in a televised statement that “tonight is witnessing the opening of the skies of the region in front of international flights,” noting that “the next few days will see the resumption of airlines flights abroad.”

“The resumption of foreign flights from Erbil and Sulaymaniyah airports by tourism and aviation companies takes about a week,” she said.

It is noteworthy that Iraqi Prime Minister Haider Abadi announced on Tuesday the lifting of the ban on international flights to and from the airport of the Kurdistan Region.

US President Barack Obama’s envoy to the international coalition against an organized organization in Iraq and Syria said the United States welcomed the decision to lift the ban on international flights from airports in the Kurdistan Region, while French President Emmanuel Macaron welcomed the same decision.

The British government also welcomed the decision by Iraqi Prime Minister Haider al-Abadi to lift the ban on international flights from airports in the Kurdistan Region.

The Iraqi Foreign Minister Qassim al-Araji arrived earlier in the morning with a high-level delegation to the city of Erbil, having held several meetings with the Minister of Interior of the region Karim Sinjari and senior officials in the interior of the region discussed the coordination of the work of ports, passports and visas, The decision to lift the ban on airports in the region.

The Ministry of Peshmerga in the Kurdistan Regional Government (KRG) announced on Wednesday the distribution of late salaries to a division of the brigades and the Peshmerga forces.

The deputy chief of staff for operations in the ministry, Maj. Gen. Qaraman Sheikh Kamal said in a press statement that last month saw the distribution of salaries to a section of the brigades and peshmerga forces Peshmerga because of the payment of money Peshmerga salaries in several batches and several sections at the expense of the ministry, and delayed arrival of the US grant allocated salaries to the Peshmerga forces For the tenth month of last year.

“After contacting the finance ministry in the province, the ministry’s account was funded,” Sheikh Kamal said, pointing out that the distribution of salaries would start from tonight.

According to pledges made by the provincial government to the Ministry of Peshmerga, the salaries of the Peshmerga will be transferred to its account in one full payment, and will be distributed in a unified time to all members of the Peshmerga.

The MP said on Wednesday that the House of Representatives will send the budget law to the federal government after the rejection of the Presidency of the Republic to ratify it, noting that President Fuad Masum will back down from his position and ratify the law.

Al-Bayati said in an interview with local media and the agency [Media treasures], “The President of the Republic Fuad Masum will recognize the seriousness of his position not to ratify the budget,” asserting that “will step back from that step and will ratify the law.”

She added that “the non-ratification of the infallible budget for a legal basis for him and was able to appeal some material before the Federal Court and not return the entire budget.”