Revealed security expert and political analyst Ahmed al-Abyad, Wednesday, the creation of a list of wanted names up to 37 personalities, including candidates for the upcoming elections will be handed over to the delegation of Interpol located in Baghdad.

“The Iraqi government has prepared a list of 37 individuals required for the Iraqi judiciary issued arrest warrants for the theft of public money in large amounts.”

He added that “among these figures ministers and former officials and sons of officials and candidates for the upcoming elections fled days ago,” noting that “the arrival of the delegation of Interpol to Baghdad came to receive those notes and arrest and return them to Iraq.”

He explained that “the arrival of Interpol to Iraq to receive arrest warrants is a precedent did not happen previously and usually go to governments to hand over the memos,” referring to the “seriousness of those moves to arrest the corrupt.”

He said that “Interpol intends to hand over passport passports to those figures and circulate them to the countries of the world to arrest them.”

The Secretary-General of INTERPOL International Jürgen Stok told the Prime Minister Haider Abadi, on Tuesday, that the Iraqis sacrificed their blood in defense of world security, and it is our duty to stand with them.

The legal expert Ali al-Tamimi, on Wednesday, the right of the government to resort to the emergency budget in the event of the parliament’s approval of the budget

“If the House of Representatives delays the approval of the general budget and near the end of its legal life specified, the government is legally entitled to resort to the emergency budget,” Tamimi said.

He added that “the emergency budget allows the government to exchange its balance of 1.12 of the budget of the previous year until the passage of the budget and agree on them.”

The deputy state law Kadhim Sayadi considered, on Wednesday, the budget as a lie intended to kill the Iraqi people.

It is scheduled to be included in the financial budget for the current year 2018 in the House of Representatives on Thursday. Finished 25

The US Embassy in Baghdad announced the launch of a $ 160 million US-funded “Tamkul” project to improve the capacity of the Iraqi government to provide public services to the population.

“Through the Takamul project, we hope to help the Iraqi federal government and local governments to provide public services to the population,” the US ambassador to Baghdad, Douglas Seelman, said in a speech at the opening ceremony of the project.

The project includes the training of Iraqi officials in the service sector and public administration to improve their efficiency in providing better services to the population, “said the project

‘s director, John Leicester, for the five-year project. Training in public administration to include in its first phase six provinces are Baghdad, Basra, Erbil, Ninewa, Anbar and Babylon.

In 2008, Iraq signed the Strategic Framework Agreement. Under this agreement, the United States is committed to providing assistance to Iraq in the areas of security, economy, administration and others. 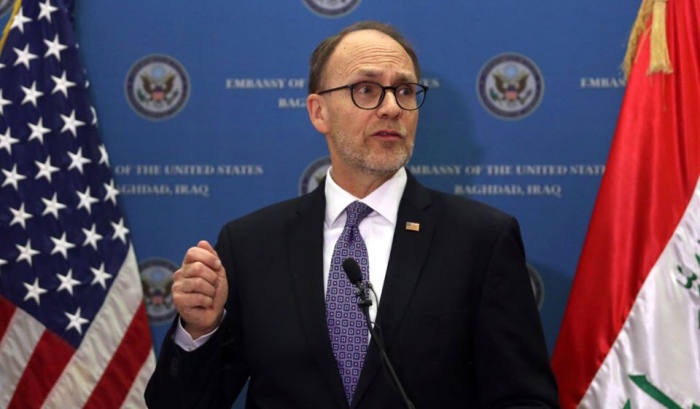 (Baghdad: Al-Furat News) Rep. Of the Kurdistan Democratic Renas Jano, the continuation of the province of Kurds to the meetings of parliament.

“We as Kurdish deputies will continue to boycott the meetings of the House of Representatives and we will not vote on this budget and will not support this type of actions, neither the direction of oil-producing provinces nor the Sunni component until the implementation of our demands.”

He pointed out that “the accountability of the Safad is not confined to one province without the other, but is rampant in all Iraqi provinces and we hope not to mislead the facts.”

Baghdad: «A delegation of political parties in the Kurdistan region of Iraq, to ​​the province of Najaf, to meet with the Shiite cleric, Ali al-Sistani, in addition to participating in a number of seminars and discussions of local organizations.
According to Kurdish sources, the delegation includes representatives of the Kurdistan Democratic Party, the Patriotic Union of Kurdistan, the Movement for Change, the Alliance of Democracy and Justice, and the Kurdistan Islamic Union.
“The delegation does not represent the Kurdistan Regional Government, but represents the political parties and parties,” said the spokesman of the National Union, Saadi Bireh, in a press conference held in Erbil. “The Najaf visit took place between Miri Center for Studies and an organization in Najaf.”
“Today (yesterday) after the arrival of a group to Najaf, there will be a meeting between a local organization on good governance, and tomorrow (today) there are 20 personalities will go from the center of Miri and political parties and will start visiting the Imam Ali dish, and then be dialogues through a symposium on governance and crises and sources And how to solve it ».
He explained «we want to show our refusal to use the pulpit and religious events against the Kurdistan region».
In parallel, criticized the spokesman for the Patriotic Union of Kurdistan «non-commitment» the Prime Minister of Iraq, Haidar Abadi, the commitments made in resolving the differences and outstanding issues with the Kurdistan region.
He added: «We have a problem with Abadi, because we can not deal with what he says every day, where he makes promises on himself in a day and retreat from the other day».
He considered the Kurdish politician that the purpose of the conferences of Abadi «celebrate his heroines on the daisy, and this is not true, the Iraqi people is the one who defeated the organization and not as he thinks».
He continued: «Abadi practiced psychological war against the people of Kurdistan», noting that «Abadi can not through humiliation and force to win the people of Kurdistan».
He pointed out that «part of what is going back to the election campaign by Abadi, but he must bear in mind that his predecessor, Maliki tried by forming the Tigris operations win the voice of the Sunni Arabs, but failed to get one of them».
In the meantime, the Chairman of the Committee on Security and Defense parliamentary governor al-Zamili, the Asayish Kurdish forces to hand over the detainees of the organization «Islamic State» (da’ash) to the federal government forces, expressing concern for their use in operations against the security forces and citizens.
He said in a press statement to him, while inspecting the Saadouniyah district of the province of Hawija, which killed a number of members of the popular mobilization earlier, that «the leadership of the Federal Police began to spread in the areas of Hawija, Riyadh, Rashad and Saadounia to cleanse these areas of sleeper terrorist cells», That it was able to kill two senior leaders calling for those who contributed to the targeting of the forces of popular mobilization », according to the site of the mass« Ahrar »Sadria.
“A dominant headquarters was established to secure the province of Kirkuk and its environs, led by a brigade of competent officers,” he said.
He continued: «The military units were deployed in order to hold the contract in these areas to pursue the rest of the gangs and urged the fugitive».
He called for “the holding of free zones between the provinces of Erbil and Sulaymaniyah and other areas adjacent to the areas where the law was imposed,” stressing the importance of not allowing the exploitation of those lands to provide support to terrorists.
He called for “handing over to the federal government five thousand Daqshi who had surrendered earlier to the Peshmerga forces and now in the Asayish prisons, to be reassured that the status of these terrorists and their fate is controlled.” He expressed his fear of “using those terrorists in operations against security forces and citizens In the province of Kirkuk and the province of Tuzkurmatu and the city of Mosul ».

The Federal Oil Ministry announced on Wednesday its readiness to resume pumping oil through Kirkuk pipeline to the Turkish port of Ceyhan in agreement with the Kurdistan Region.

The ministry said in a statement to the twilight news that the oil minister Jabbar al-Allaibi met with the deputy Russian company Rosneft Didier Kasimiro, and confirmed that the doors of the ministry is open to the international oil companies to participate and contribute to investment projects for the rehabilitation of oil pipelines, and the establishment of refineries and gas investment and rehabilitation of infrastructure.

The statement added that the ministry, in an effort to increase the volume of financial revenues is ready to resume pumping crude oil through the Kirkuk-Ceyhan pipeline in agreement with the region.

The Secretary of the Iraqi parliament member Amin Bakr on Wednesday, obtained the approval of the Prime Minister to pay the salaries of the employees of the Directorate General of Nationality and Passports in the region.
“The prime minister agreed to pay the late salaries of the staff of the General Directorate of Nationality and Passports in the region for the months of October, November and December 2017,” Bakr, a Kurd deputy, said in a statement.
He added that “efforts are continuing to launch the salaries of all segments of the region, calling on the Federal Prime Minister Haider Abadi to speed up the release of salaries of officials of the ministries of health and education in the region in fulfillment of promises made by the disbursement of those salaries.