KIRKUK, Iraq – February 26: Arbil, Kirkuk and Irbil-Makhmour, the security department of the province of Arbil, announced Monday that preparations for the opening of the Erbil-Kirkuk and Erbil-Makhmour roads have been completed this week .

“We are now preparing to set up our control points on these roads. After completing our procedures, we will open the two roads.” “The  opening of the two roads comes at the request of the Erbil provincial council last week.” AH

“The parliament is suffering from the difficulty of holding a meeting as a result of political wrangling and disagreements between the various blocs on the budget, especially the two blocs of the Kurdistan Alliance and the coalition of Iraqi forces,” said Abdul-Ilah al-Naeli to Mawazin News, “ruled out passing the budget bill in the next parliament session on Wednesday, .

Al-Naeli added that “the Kurdistan Alliance bloc insists on the 17% share of the Kurds in the operational budget,” noting that “the height of the demands of the Alliance of National Forces on the need of the liberated areas of the prodding of large sums of money, which led to divergence of views as well as a dispute Large and divergent in the ideas and ideas between the blocks. ”

He criticized the Nali different blocs of the National Alliance, which “the intersection of parliamentary meetings for electoral reasons, some and others,” likely “pass the budget during the next parliamentary session, as happened in 2014 when I passed the current session.”

Revealed the House of Representatives Emad Jokna, on Sunday, a meeting expected for the three presidencies within the next 48 hours to resolve differences on the budget law. Ended 29/5

On his visit to the United States of America, Barzani said in a press statement: “The purpose of the visit is to discuss a number of important issues, such as the relations between the Kurdistan Region and America, the situation in Iraq and improving relations between Baghdad and Erbil.

“So far, we have had many meetings and meetings on these issues, with US officials in the White House and others, including a special meeting with Herbert McMaster, the US national security adviser, and there have been several meetings at the US State Department, and there will be other meetings with Members of the Senate and House of Representatives ».

During his visit to Washington several days ago, Barzani met senior US officials, including national security adviser Herbert McMaster, the US representative to the coalition, Brett McCurk, deputy assistant secretary of state Jonathan Cohen, and others.

The dialogues and meetings that took place between the officials of Erbil and Baghdad have no tangible results on the ground, with regard to resolving the existing problems and lifting the punitive measures imposed by the Iraqi government on the territory after the referendum.

Barzani pointed out that the Americans always emphasize that «relations with the Kurdistan Region are important and specificity, and are always seeking to develop them, and express their willingness to resolve the differences that sometimes witness these relations», and «They are convinced that the Kurdistan Region is an important part of the Middle East and important .

As for the organization of the preacher, said pleased Barzani: «Da’ash militarily defeated, and liberated the areas occupied by, but this does not mean that the duel has ended definitively, because it seeks to rise again in many areas, and carried out so far many attacks on security forces in Kirkuk.

Despite the announcement by Iraqi Prime Minister Haider Abadi, the end of the “final victory” on the organization, but the deteriorating security conditions in many areas confirm the continued threat of organization.

Barzani stressed that «in order to eliminate the preacher and the sublime Daash, must find a solution to the factors that encourage the emergence of such terrorist organizations, but Iraq has not yet to do so».

“The referendum was an expression of a nation about its future options for living and how it wants to live,” Barzani said. “This does not mean that we are not realistic, or that we are not. “We believed that the referendum would cut the way for the unjust attacks that the Kurdistan Region was subjected to,” he added. “We needed international guarantees to stop the bloodshed and disasters that had been solved by the Kurdish people for decades. Unfortunately the order was interpreted differently, and we are s Lighter that this interpretation was intended, it was always there are efforts to reduce the powers of the territory of the Kurdistan Region, and to this end have taken the referendum as a pretext, otherwise what was the referendum process to cause any form unjust attack on this level on the Kurdistan Region ».

On Monday, the Kurdish parties will form a delegation to visit the religious authorities to discuss the Baghdad and Erbil crisis.

A source familiar with the “Mawazin News”, “The Kurdish parties are considering today, the formation of a delegation of representatives to visit Najaf and meet the religious authority, Ayatollah Ali al-Sistani.”

The source added that “the visit comes to discuss resolving the crisis with Baghdad.”

The adviser of the Kurdistan Regional Security Council, pleased Barzani, said on Monday that the defeat of the organization of a military advocate does not mean the final elimination in Iraq.

Barzani said after meeting with US officials in Washington today, told reporters that “the organization of a military advocate has been defeated and the areas that were under his control has been released,” but that “this does not mean that the organization was eliminated definitively.”

He added that “what we are seeing now that the groups associated with the organization has reappeared again, and is launching attacks on Iraqi forces and this is happening in the vicinity of the city of Kirkuk and inside,” saying that “the thought of a military organization does not end militarily.”

Barzani pointed out that “to eliminate the terrorist groups that are in the form of urging must address the factors and reasons that led to the emergence, and Iraq to date is not ready to find a suitable solution to such problems.”

“If these factors are not addressed, I think that the presence of these terrorist assemblies will continue in Iraq and the region,” he said.

The adviser of the Kurdistan Regional Security Council, Barzani is currently visiting the United States of America and is holding meetings with senior US officials.

ERBIL — The decision to extend the ban on the international flights in the Kurdistan Region has not been confirmed officially, said the federal government spokesperson.

The Iraqi government spokesperson Saad Hadithi on Monday told BasNews that there is no official confirmation regarding the extension of the embargo on the Kurdistan Region’s airports.

He additionally revealed that opening the airports will only depend on solving the disputes between Erbil and Baghdad. In other words, the flights could start in the region next week if the sides reach an agreement on the issues.

Several sources earlier said that the Iraqi PM has extended the ban on the international flights in Kurdistan Region until the end of May.

The United States has provided $ 7.7 billion in humanitarian and economic aid to Iraq, US Consul General Timothy Davies said.
In a joint press conference with the Governor of Basra, Davies noted that a complex in the governorate building, attended by the correspondent of the Euphrates News Agency today, “to the extent of the commitment of the United States of America to support them to eliminate the preacher,” noting that “our relationship with the Iraqi side stronger than before and the best evidence of Our commitment and our support for the security and economy of Iraq and the presence of US Secretary of State at the donor conference in Kuwait. ”
He added that “our relationship with Iraq in the ongoing development and the visit of the Deputy Secretary of State to Baghdad and his meeting with the Higher Strategy Committee under the re-start of the Iraqi-US agreement talks is the best evidence of our support for Iraq and stability.”
“Since 2014, the United States has provided $ 1.7 billion in humanitarian assistance to Iraq and $ 6 billion in economic and technical assistance,” he said.
“We are here today to attend the commercial development program and hope to bring foreign companies to Basra,” he said, adding that “the program will focus on our support for infrastructure and bring investment companies to Iraq,” expressing his “happiness that there is an opportunity for US companies to come to Basra And invest in them. ”
He noted that “during the next two days we will work seriously on the partnership between the private and public sectors and investment in Basra.”
For his part, the governor of Basra, Asad al-Eidani, said that “the visit of the consul of the United States with an economic delegation headed by Mays al-Aboussi to hold workshops for two weeks to the province came to benefit from the US export enterprise that will support Iraq 3 billion dollars.”
He pointed out that ”

The US Federal Aviation Administration announced on its site the extension of the suspension of airports of Arbil and Sulaymaniyah for all civil, military, diplomatic and humanitarian flights from 28/2/2018 to 31/5/2018.
The Federal Aviation Administration (FAA) is a Department of Transportation of the United States of America responsible for organizing and supervising all aspects of civil aviation in the United States as well as licensing commercial airlines. Established in 1958 under the name Federal Aviation Agency, it adopted its current name in 1967 when it became part of the US Department of Transportation.
The Iraqi government extended the ban on foreign flights to and from the airports of the Kurdistan region of Iraq for another three months.
In September, the Iraqi government banned international flights to and from Erbil and Sulaymaniyah airports in response to a referendum on the future of Kurdistan, which was organized by the authorities of the province and considered Baghdad illegal.
http://alforatnews.com/modules/news/article.php?storyid=160283

Barzani said in a publication on his official account on the social networking site Twitter that he met today with Brett McGurk, the US president’s special representative in the international anti-Da’ash coalition, and Jonathan Cohen, deputy assistant secretary of state.

“We discussed the political differences between Baghdad and Erbil and confidence-building measures, and the important role that the KRG can play to promote regional stability.” 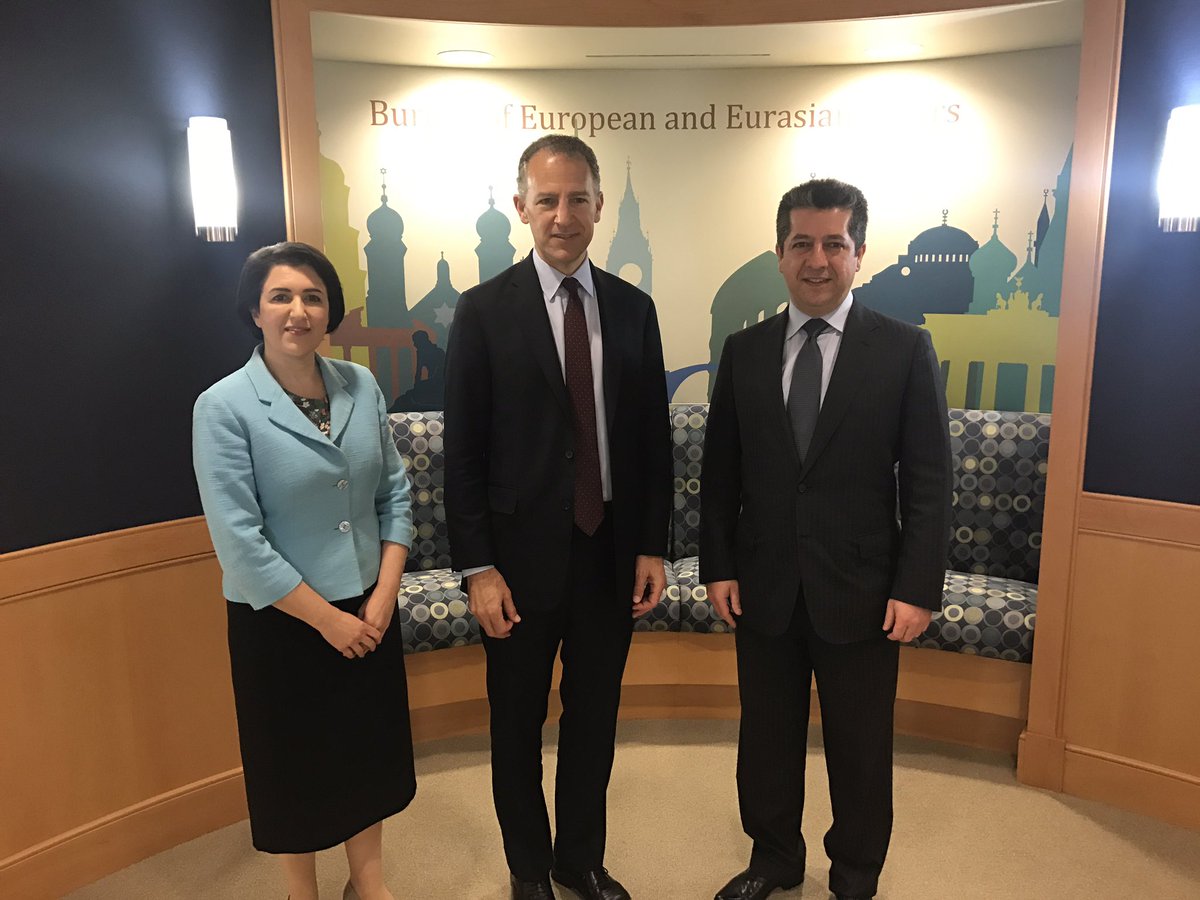 The adviser of the Kurdistan Region Security Council pleased Barzani arrived in the United States of America on Thursday afternoon, on an official visit.

In his first meeting with US administration officials after his arrival in Washington, Barzani discussed with US National Security Council Advisor Herbert McMaster the bilateral relations between the Kurdistan Region and the United States and the latest political and security developments in the region.

Barzani’s visit to Washington follows his participation from 16-18 February in the Munich International Security Conference.

This visit is the first official high-ranking official to Washington since the referendum on independence from Iraq, which was conducted by the Kurdistan region on 25 September last and won an overwhelming majority in favor of independence.