“Abadi met in his office Wednesday with Assistant Secretary of Defense Robert Karem and his delegation,” a statement issued by the prime minister said.

“During the meeting, they discussed bilateral cooperation between the two countries and the regional developments and support for Iraq in the post-victory phase of terrorist gangs,” he added.

“Karem offered condolences to the Riyadh district of Hawija, which was carried out by a terrorist gang of cells and sleeping pockets against a number of popular crowd fighters.”

“The continued support of the United States of America to Iraq, praising the great development of Iraqi forces,” the US Assistant Secretary of Defense said.

Abadi stressed “the importance of ending the conflicts in the region and the direction of construction, noting that Iraq has begun the stage of construction and reconstruction after the great victories achieved by the gangs of terrorist advocates.” is over 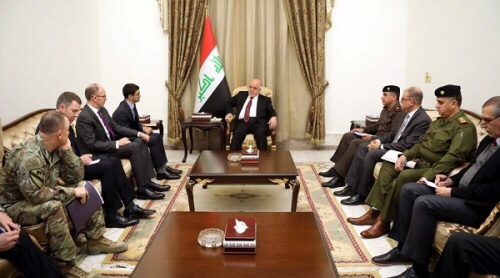