The @IraqiGovt thanks Kuwait, @WorldBank,the EU, @UN for hosting & co-chairing the International Conference for the Reconstruction of Iraq. The strong response to this event is a reflection of the confidence of the international community in our vision for the rebuilding of Iraq 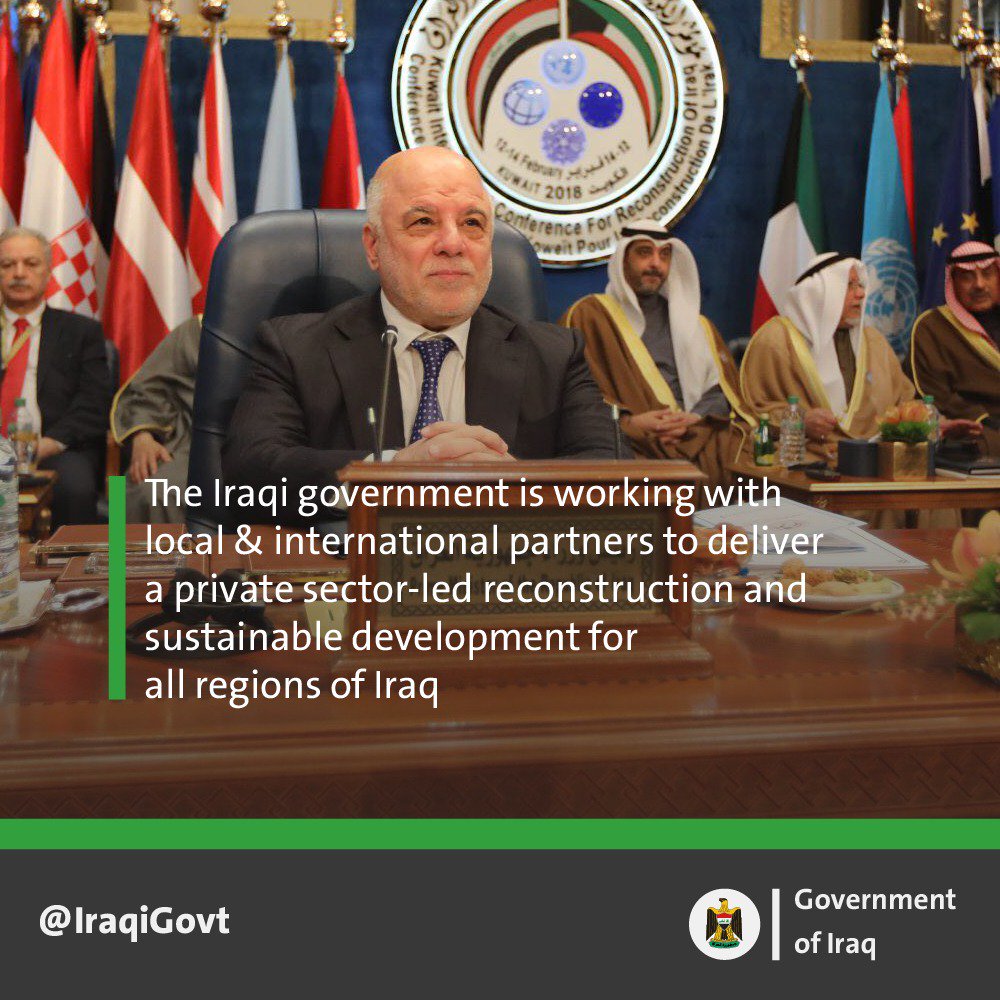 ERBIL — The Kurdistan Region and Iraqi governments are close to reach an agreement over their disputes in the nearest future, said a source close to Iraqi Prime Minister Haider al-Abadi.

The high-level delegations from Erbil and Baghdad are due to resolve the differences over Kurdistan Region’s airports, customs and border lines, the source told Shafaq News.

He further revealed that the Kurdistan Regional Government has already agreed with most of the points in the political deal, the rest would remain under discussion.

Iraqi Prime Minister Haider al-Abadi said earlier the day that Erbil and Sulaymaniyah airports would soon be re-opened after over four months since Baghdad imposed a flight ban on the Kurdish region.

The economic adviser to the Prime Minister, the appearance of Mohammed Saleh, on Monday, Iraq is committed to the limits set for all countries on access to loans, while they revealed an intention by the Gulf countries to extinguish the debts owed by Iraq.

“Most of his debt goes back to the pre-1990 era, to the Iran-Iraq war, a debt that has not been confirmed because there is no documentation to prove it,” Saleh told Mawazine News.

He disclosed that “the intention of the Gulf States to write off debts owed by Iraq for a final,” pointing out that “the UAE years ago, decided to cancel the debt, but it is still verbally undocumented.”

He expected the economic adviser, “to write off debts owed by Iraq after the Kuwait Conference so that it has the capacity to deal with loans,” describing the talk about Iraq’s acceptance of loans obtained at the Kuwait Conference as “contradictory because the World Bank is a sponsor of the conference, Iraq’s inability to repay loans. ”

“Iraq does not need the loans it gets at the conference, even if it has soft benefits,” said Abdul Rahman al-Mashhadani, an economist at the Kuwait conference. “Iraq needs loans to buy production lines, Investments in factories to operate a workforce or loans that address the balance of payments imbalances. ”

“Iraq has a license it obtained two years ago when they gave it a credit rating from the World Bank to qualify for loans under its guarantee as well as the International Monetary Fund,” Mashhadani said. “He also has a pledge from Britain of 10 billion pounds, up to 14 billion dollars, What came out of the Kuwait Conference. ”

He explained that “the purpose of the Kuwait conference is to obtain grants, but what we have received are loans,” revealing at the same time that “some investors are even afraid of tribal conflicts that threaten some projects.”

Sources familiar with the Council of Prime Ministers have revealed earlier that Prime Minister Haider Abadi may “reject” the loans granted to Iraq at the Kuwait conference, noting that the World Bank has confirmed the inability of the country to bear more debt.

The Kuwait International Conference for the Reconstruction of Iraq was launched on Monday, February 12, 2018, and concluded on Wednesday (February 14th).

The deputy of the Iraqi parliament for the Kurdistan Democratic Party bloc Majid Shankali on Monday reopened airports in the region before international flights before the end of this month.

“Today there was in Baghdad a technical delegation from the region and our information confirms that there have been very large understandings regarding the suspension of international flights to and from airports in the region and these understandings will be applied on the ground,” Shankali told twilight news.

He added that “the deadline for the extension of the ban ends on the 28th of this month and today is determined whether the Federal Government to extend the ban again or not.”

However, Shankali said that “we believe the technical delegation of Kurdistan exceeded with the concerned in Baghdad a lot of problems,” noting that “Mr. Abadi’s remarks today also benefit decisively the subject of ending the international ban on international flights from airports in the Kurdistan Region.”

The Iraqi Prime Minister Haider Abadi has announced near the opening of the airports of Kurdistan in front of international flights.

“The referendum has had serious consequences for the region and we are close to providing the salaries of the region’s employees, but there must be proper supervision to ensure that salaries are paid to the employee, not to the followers of the parties, and this is a serious issue,” Abbadi said in an interview with German DW station.

The Kurdistan government has agreed to subject the airports of the region to the management of the Federal Aviation Authority, while attention is drawn to the approval of Prime Minister Haider Abadi on the understandings reached during the talks between the Kurds and the Government of Baghdad, after considering its recommendations and outputs.

A government delegation from Baghdad ended several rounds of negotiations in Arbil, which was devoted to understanding the establishment of a mechanism for the management of airports, customs and border crossings, before lifting the ban on airports in the region, in the first step to resolve the controversial issues after the referendum on independence.

After several meetings of the six committees in the Parliament of the Kurdistan Region specialized in writing a report on the draft reform of the Government of the Territory for the public sector and retirees completed those committees and raised its report to the Presidency of Parliament.

The Deputy Chairman of the Legal Committee in Parliament Bahar Mahmoud said in a statement today, that the committees concerned ended its report on the draft reform of the general job and submitted to the Presidency of the Parliament of Kurdistan, describing the report prepared as close to reality.

She added that “we had observations on the project and we at the same time did not disable it,” referring to the addition of material on the project obliges the Kurdistan Regional Government and in the case of the implementation of the return of money saved, especially for the lowest levels of staff.

News / Iraqi Prime Minister Haider Abadi announced the opening of the airports of Kurdistan in front of international flights.
Ebadi said in an interview with the German that DW station “referendum , which had serious consequences for the region, and we are approaching the provision of salaries of employees of the province, but there must be properly controlled so as to ensure go salaries for employees not to keep going parties , and this is a serious issue.”
He also ” In the next few days we will open the airports of Erbil and Sulaymaniyah to travel abroad, after ensuring that the federal authority is located in the airports of the region. ”
The Government of Kurdistan has agreed to subject the airports of the Territory to the management of the Federal Aviation Authority, while attention to the approval of Prime Minister Haider Abadi on understandings that have been Alto For them during the talks between the Kurds and the Baghdad government, after considering the recommendations and outputs.
A government delegation from Baghdad ended several rounds of negotiations in Arbil, which was devoted to understanding the establishment of a mechanism for the management of airports, customs and border crossings, before lifting the ban on airports in the region, in the first step to resolve the controversial issues after the referendum on independence.

A member of the Finance Committee of Parliament Mahasen Hamdoun, said Monday that next Tuesday is the date of voting on the budget in 2018.

Hamadoun said in a press statement that ‘the Finance Committee continues its meetings to discuss the budget and will not clear things, only on the day of voting on it’.

“The vote on the budget will be next Tuesday,” she said, stressing that ‘deductions of salaries of employees stopped in the budget’.

“The Finance Committee is meeting today to complete the discussions and will not show the picture only in the voting session on the budget,” adding that ‘the proportion of the region will not change and the members of the Kurdistan Alliance did not attend to discuss the budget so far, so the situation remains as it is.