“Is scheduled to hold six committees in the Parliament of Kurdistan on Sunday, a meeting on the elimination of the phenomenon of regular salaries and pension illegal and write the final joint report in this regard.

These committees talk about the return of 100 billion dinars wasted from public funds in the Kurdistan region per month, it is hoped that through the issuance of the law to distribute the salaries of employees in full without saving.

The six committees participating in the meeting are the Finance, Peshmerga, Interior, Legal, Integrity and Home Affairs Committees and are working on writing their final report on the reform package of salaries and salaries of illegal retirees through tomorrow’s meeting.

The committees are composed of 18 people demanding the elimination of anything illegal even if within their parties, while a member of one of the committees that the government could achieve this decision.

After the end of the preparation of the joint report of the committees, which works on it four years ago, on Sunday, the report will be directed to the presidency of the parliament in order to determine the day to vote and then and the elimination of illegal salaries can eliminate the problem of the system of saving and forced salaries of employees.

The most important issue is the return of about 100 billion dinars per month for the public finance of the Kurdistan region, which was wasted during the past period, and the provincial government expressed its willingness to receive the law from parliament and implement its commitments to legal reform.

The KRG now needs to save up to 480 billion dinars a month for the distribution of salaries and in order to abolish the savings system it has to get imports worth 637 billion dinars.

The Iraqi Prime Minister Haidar al-Abadi and the President of the Kurdistan Regional Government Njirgan Barzani, expressed their pleasure to renew the opportunity to meet between them in light of positive conditions and clear dialogues, and talked about the Conference of Iraq’s reconstruction in Kuwait and the participation of the delegation of the region and the results of the conference and described it as a good campaign for the reconstruction of Iraq.

He expressed his pleasure in the dialogue between Erbil and Baghdad and wished that positive results could be reached and that the two sides could solve the problem of salaries, airports, oil, border crossings, dams and other subjects. Barzani, for his part, stressed the Kurdistan Region’s commitment to dialogue and rebuilding confidence and implementing the constitution for the benefit of all.

The delegations of the two sides talked about the formula of the state of dealing with this stage and the topics that can be settled in a short period for the benefit of citizens and the return of stability, as well as being able to take steps to rebuild confidence in the process of dialogue on the basis of adherence to the Constitution. Mechanism to implement and identify the relevant parties so that they can sit at the negotiating table during the earliest period and solve the problems.

The meeting was held Saturday morning on the sidelines of the second day of the Munich Security Conference in Germany, in the presence of the adviser of the Security Council of the region, Massur Barzani, the head of the Office of the Presidency of the region Fuad Hussein and the official department of foreign relations in the regional government Falah Mustafa and the representative of the regional government in Germany, Dlshad Barzani, The Iraqi national security adviser Faleh al-Fayadh, Iraqi intelligence chief Mustapha al-Kadhmi, the adviser to Iraqi Prime Minister Nofal Hassan and the Iraqi ambassador to Berlin.

The Iraqi civil aviation authorities decided to set a date for the launch of international flights in the airports of Erbil and Sulaymaniyah international and private pilgrims from the province of Kurdistan.

According to a decision issued on February 1 by the Iraqi Civil Aviation Authority and the Deputy Director General of the National Operations Center Abdul Amir Mohammed Ali, a date was set for the resumption of international flights from Erbil and Sulaymaniyah airports on the 28th of the same month.

According to the book, Prime Minister Haider al-Abadi agreed to the civil aircraft flights from Sulaymaniyah and Arbil international airports provided they are provided with full information on the number of flights periodically.

The head of the Haider al-Abadi Council said on Saturday that Iraq could eliminate the organization of a preacher.

This came during a meeting with a delegation of several members of the US Senate and House of Representatives on the sidelines of the Munich Security Conference.

“The extremist elements are only thriving in the presence of internal sectarian polarization and differences in the region,” Abbadi said during the meeting. “There is a danger to the organization of the terrorist,” Abadi said, adding that “we can eliminate the organization once we have been defeated.”

The news agency reported on Saturday that the delegations of countries that Abadi met on the sidelines of the Munich Security Conference asked him to expedite the resolution of differences and outstanding issues between Erbil and Baghdad.

Abadi had met on the sidelines of the conference held in Munich a group of delegations and personalities from other countries, most notably the American delegation and the French, British and German.

Sources said at the conference, “Abadi is under international pressure on ending the problems with the Kurdistan Regional Government and opening a new page.”

The sources added that “all the international met Abadi on the sidelines of the conference requested the fastest in resolving the differences between Baghdad and Erbil.”

The conference, which took place on Friday in Munich, will last for more than 600 days between a prime minister and ministers and officials from various countries.

A delegation from the Kurdistan Region, headed by Prime Minister of Kurdistan Nezhirvan Barzani and includes the adviser of the security of the region pleased Barzani, and the President of the Office of the Presidency of the Territory Fuad Hussein, and the external relations in the regional government Falah Mustafa arrived on Thursday to Germany at the official invitation to attend the Munich Security Conference, It lasts for three days.

ERBIL — The Iraqi government has promised to resolve the issues between Baghdad and Erbil, but the Kurdistan Region is still waiting for the fulfilment of those promises, said Masrour Barzani, the Chancellor of Kurdistan Region Security Council (KRSC).

The remarks came after a high-level delegation from the Kurdistan Region met with Iraqi Prime Minister Haider al-Abadi on the sideline of Munich Security Conference on Saturday.

“In the meeting, Mr. Abadi spoke of Baghdad’s readiness to resolve some of the disputes between Erbil and Baghdad, and expressed a strong will to ease tensions between the sides,” Barzani was quoted by Kurdistan 24.

However, he noted that the process takes a longer time until all the issues between the sides are addressed.

“We will wait to see whether or not they will implement the promises made today.”

The senior Kurdish official also said that the ban on Kurdistan international flights, which is imposed by Baghdad in retaliation for the independence referendum, would be lifted after the technical issues are resolved.

The Kurdistan Region security adviser, Massur Barzani, Saturday, that the delegation of the territorial government reached with the Prime Minister Haider Abadi, during a meeting of the parties in the German capital Munich, to visions and ideas common to resolve differences between the center and the region.

“The Prime Minister Haider al-Abadi, during the meeting with the delegation of the provincial government, Baghdad’s readiness to resolve the differences with Erbil,” said Barzani, in a statement received by “Mawazin News” copy of it, adding that “it takes time to resolve all outstanding issues.”

“We have reached good common visions and ideas and have made promises to solve some of these problems as an expression of their good intentions,” he said. “We will wait, will these problems be resolved on the ground or not?”

He stressed the “importance of the adoption of the Iraqi constitution as a basis to resolve all outstanding issues,” pointing out that “the embargo file imposed by Baghdad on international flights at the airports of Kurdistan, was discussed with Abadi.”

He stressed that “Abadi, expressed the government’s willingness to lift the ban on airports but after resolving some of the remaining technical issues,” adding that “the Kurdistan Regional Government is ready to help facilitate the process.”

The head of the US delegation to the Munich Security Conference Joseph Biden, on Saturday, received proposals to resolve differences and outstanding issues from the President of the Kurdistan Regional Government, Nechirvan Barzani.

Biden told reporters after a meeting with the delegation of the Kurdistan Region on the sidelines of the Munich Security Conference, “The meeting was very good, and I fully respect the entire Kurdish.”

He added that “the Prime Minister of the Kurdistan Region was very understanding and clear and has good proposals to resolve differences and outstanding issues between Erbil and Baghdad have been heard.” 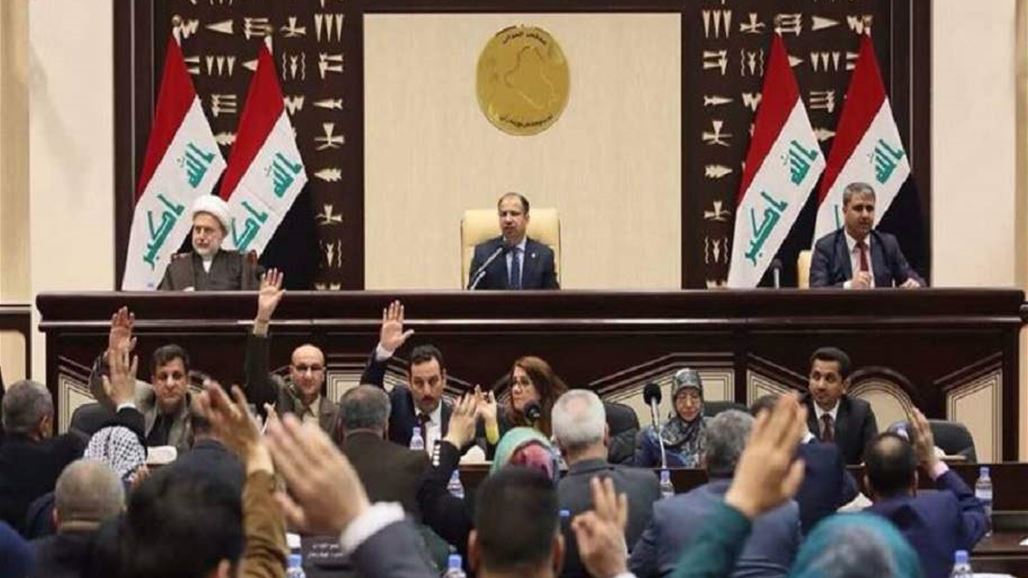 Baghdad
The President of the House of Representatives Salim Jubouri , on Saturday, the existence of 20 laws ready to vote, indicating that the Finance Committee told him near the end of the budget law.

“There are more than 20 laws ready to vote,” Jubouri said during a parliamentary session held today.

Jubouri added that “the Finance Committee told us that within a week will end the amendment to the federal budget law for 2018,” pointing out that “the Council hosts tomorrow the Minister of Water Resources and officials in the ministry to discuss the water issue.”
The MP for the rule of law Haider Mawla, stressed earlier, that the quotas and consensus caused the obstruction of the work of the government and the parliament alike, confirmed that a lot of laws and important legislation is disabled as a result of political consensus.

Tamimi called for “the deletion of Article 42 of the draft law of the budget in 2018 to restrict the granting of bonuses and promotions and save employee benefits.”
The member of the Finance Committee Ahmed Hama, said last Tuesday, that the funds deducted from salaries of employees for the previous year can not be returned retroactively, indicating that the retroactive effect includes the current year that the deduction is “illegal.”
A member of the parliamentary legal committee Sadiq al-Labban said last Sunday that the budget of 2018 included the imposition of new taxes after the agreement to cancel deductions of salaries of employees.
It is noteworthy that the member of the Finance Committee parliamentary Majida Tamimi, revealed the government amendments placed on the budget of 2018, asserting included taxes on sales and sales centers markets and salons and beauty.