I assured Prime Minister @HaiderAlAbadi the World Bank Group will stand with Iraq at every step and maximize private financing and investment wherever possible to help #rebuildIraq. 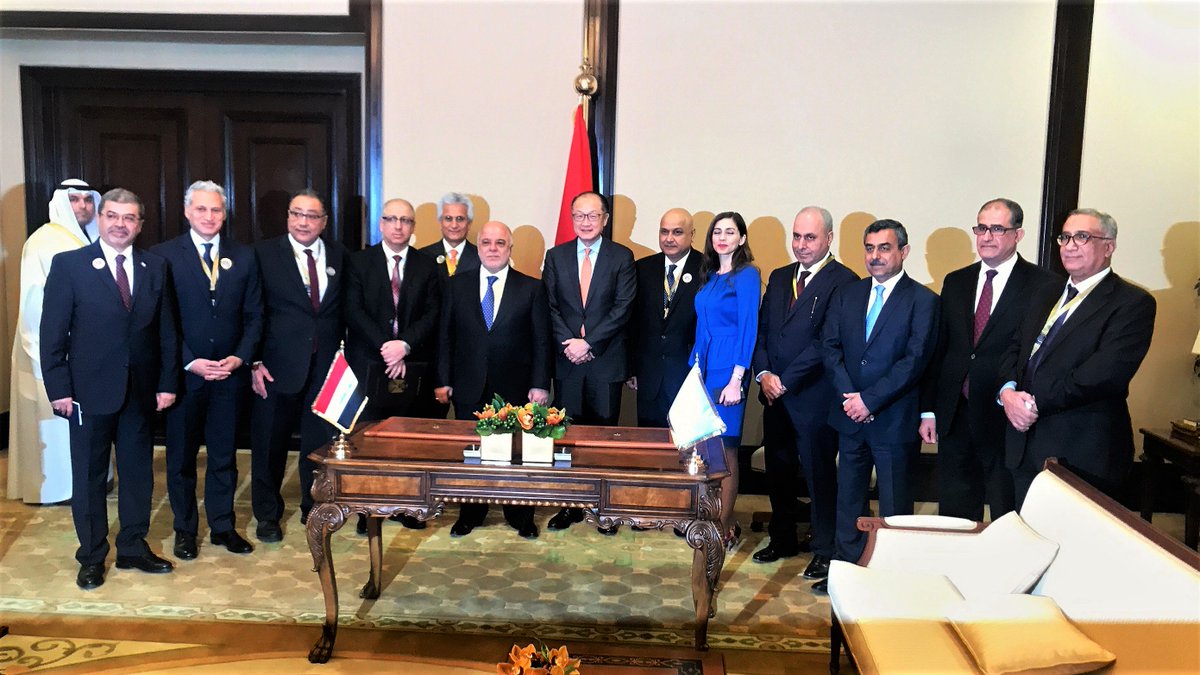 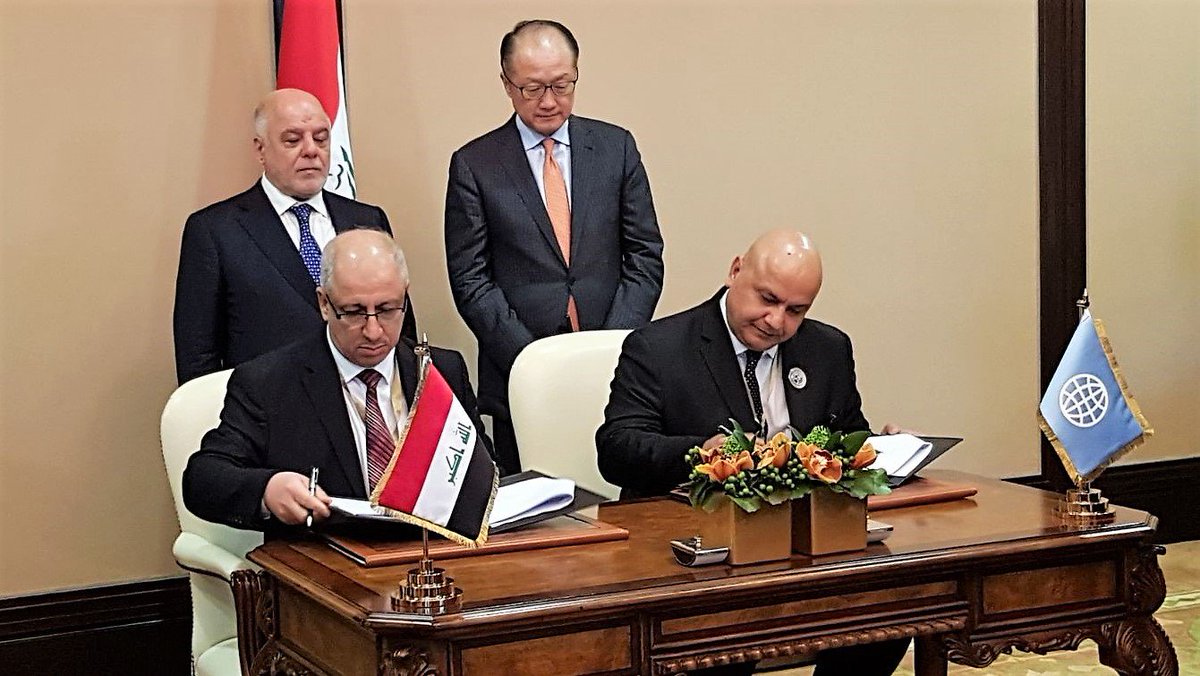 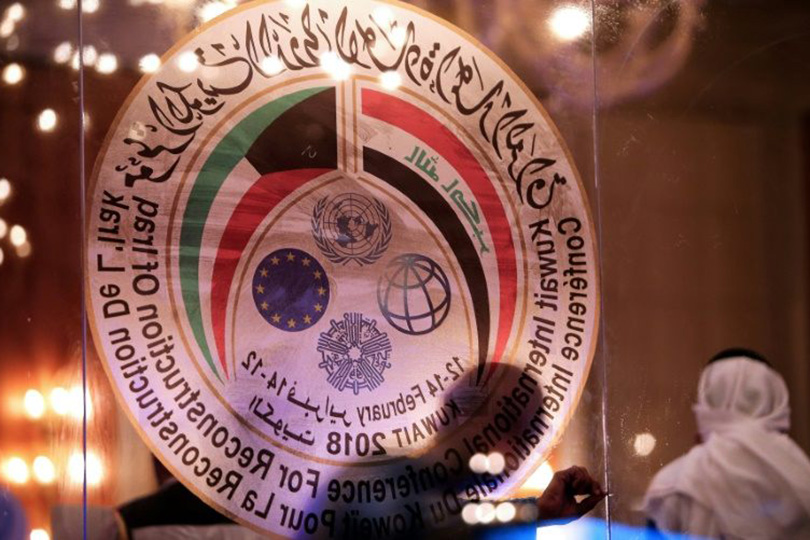 The General Secretariat of the Council of Ministers announced on February 9, 2018, the completion of the procedures for the convening of the reconstruction conference which will be hosted by the State of Kuwait during the period 12-14 February 2018, confirming the participation of many countries, international companies, international organizations and international financial institutions. For its part, announced the Iraqi National Investment Commission that it will show 157 projects described by the strategy for investment during the conference.

The Iraqi government has already announced the need for $ 100 billion for the reconstruction of the provinces and cities liberated from the control of the terrorist organizations, and is now striving to collect the bulk of this amount in the reconstruction conference in Kuwait with the decline in financial revenues due to low oil prices.

This is to highlight this important and crucial issue of international support for reconstruction. We certainly do not have the Marshall Plan of Iraq, no substantial financial support, and it is very much promoted in Iraq. The system is still the same if we say that it worsened performance more, and still the top spoilers are protected by the organs of the state and have a significant role in decision-making and take, and still political corruption, financial and administrative at the highest levels.

We do not want to be pessimistic, but that’s the reality. We are still afraid, but we are afraid to discover our reality and run away without turning back. The decision makers must realize that the money they can get from countries is mostly taxpayers’ income, so policymakers in participating countries can not sacrifice their voters and their public to pay money to institutions they see as corrupt and inefficient.

In the last few days before the announcement of the military victory and even after announcing the organization of a supporter of the terrorist, the government and judicial institutions and control in front of a large opportunity to confront corruption and launched a campaign and a large and resolute, especially with the support of the general public and religious reference. Much of the financial resources needed for the reconstruction and stability of the liberated areas could have been provided. This file is important and the government has a responsibility to provide a clear picture of it and a precise and practical vision around it to enhance the investment environment. And therefore there is no guarantee that the funds provided will be treated transparently and will be spent in accordance with the accounts of a large transparency at the time does not have the final accounts for the last six years at the level of the federal budget.

Also, in the framework of providing the investment environment, there is another file of files that the government must submit to it, which is the administrative routine and the lack of integration of the legislative framework guaranteeing the rights of investors and the sponsor to provide facilities for foreign investments institutionally. This file is a major shortcoming in which the government and the House of Representatives share a great deal of misfortune. This is because the government did not achieve a few successes in the “one-stop” system, despite its approval.

The banking system and the financial system in the country has traditionally been one of the main infrastructures sought by the investor in ensuring the transfer of his money and profits in a fragile security environment controlled by arms outside the state system in some areas.

These points represent many challenges to the government and the House of Representatives and require them to pass them according to a clear economic vision that contributes to the creation of international credibility in the institutions of the state and meets the ambitions of the international community units in the transparency of spending and the clarity of its tracks in reconstruction and stability.

At this stage, Iraq is the strongest party in defeating terrorism and has achieved remarkable successes in this file. I imagine that the international community has a great interest in not returning terrorism and extremism to it by strengthening the economic environment that guarantees the welfare of individuals and avoids engaging in extremist groups, whether religious or otherwise.

* Researcher at the center of the Euphrates Development and Strategic Studies / 2004-Ⓒ2018
http://www.fcdrs.com

The @IraqiGovt and the @WorldBank sign agreements totalling US $510 million to finance projects to improve water supplies, and support job creation in Iraq. These agreements increase the World Bank’s total commitment to Iraq to US$4.7 billion #InvestIraq 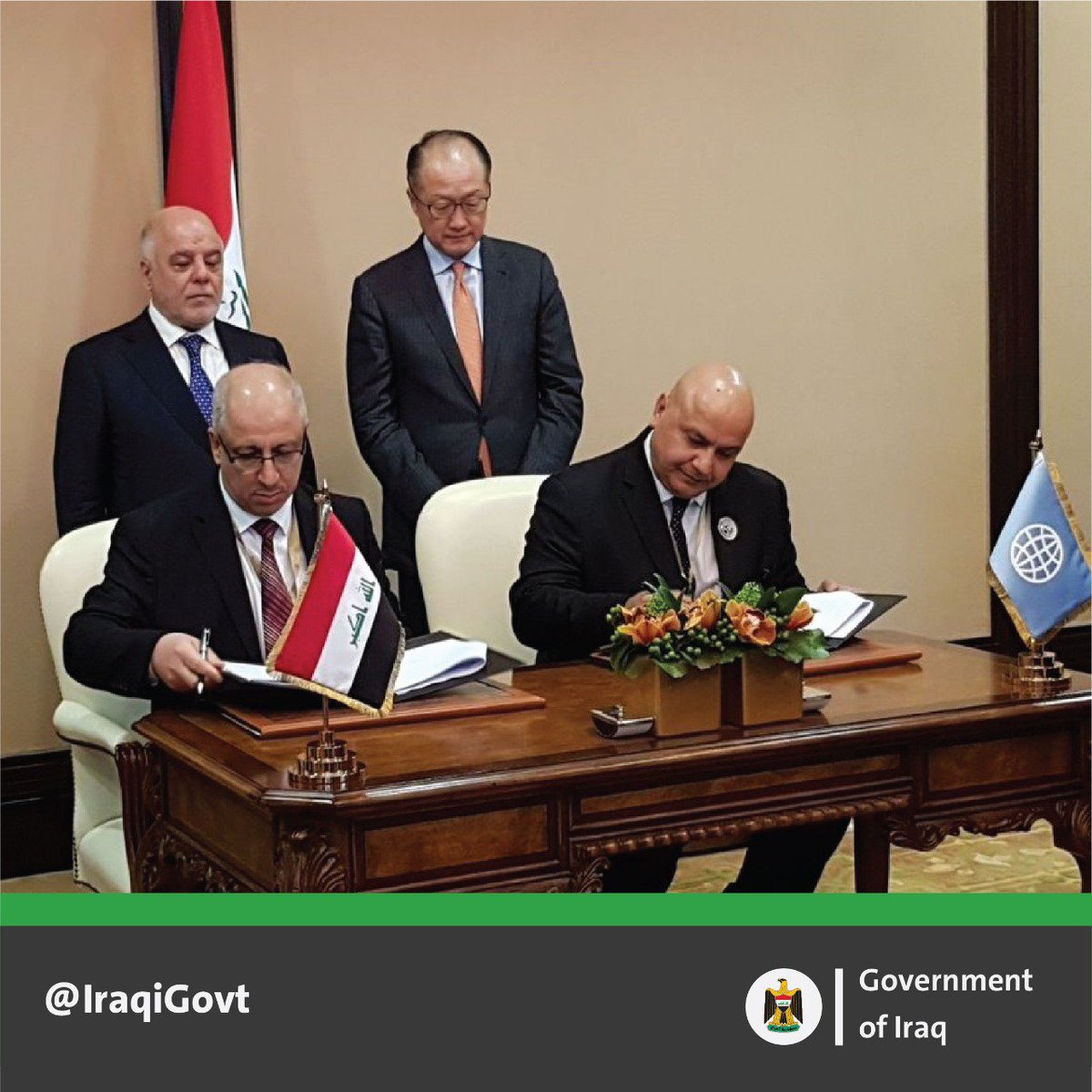 Arbil / .. The head of the Kurdistan Regional Government, Nechirvan Barzani, on Wednesday, the region’s readiness to resolve problems with the federal government on the basis of the Constitution, while expressing his hope for continued US support for the Peshmerga forces.

The Presidency of the Kurdistan Government in a statement received “Eye of Iraq News”, a copy of it, “The Kurdistan Regional Government President Nechirvan Barzani and his deputy Kibad Talabani and a number of officials of the Kurdistan region met with a delegation of US military and diplomatic led by US Central Command commander Jean Joseph Futil,” indicating that “The meeting discussed the military and security situation in Iraq and the Kurdistan region, and the post-elimination of Daqash as well as the technical committees talks between Arbil and Baghdad and my meeting Barzani and Prime Minister Haider Abadi in Baghdad and Davos.”

Barzani praised the “continued support and military assistance to the Peshmerga forces in the war against Daqash, expressing his hope for continued assistance,” reiterating the “readiness of the Kurdistan Region to resolve problems with the Iraqi federal government on the basis of the Constitution.”

For his part, Fotil stressed the “continued US military assistance to the Peshmerga forces,” expressing at the same time “his support and satisfaction of the dialogue between Arbil and Baghdad.”

The Kurdistan region suffers from an internal political and economic crisis following the holding of the independence referendum on September 25, while the relationship between the federal government and the Kurdistan region is strained, prompting the central government to impose several measures, including stopping international flights at Erbil and Sulaymaniyah airports.

The statement added that the Committee informed the Directorate of Education west of Sulaymaniyah, the end of its functions in the office of the Directorate.

The leader of the US Central Command during his meeting with the President of the Kurdistan Regional Government, Nzhirvan Barzani, on Wednesday, the continuation of military assistance and cooperation to his country with the Peshmerga forces in the Kurdistan region in the war against the organization calling.

The statement added that the two sides discussed the military and security situation in Iraq and the Kurdistan Region and the post-elimination phase of the organization and the latest developments in the dialogues of the technical committees between Arbil and Baghdad and discuss the meetings of the President of the Kurdistan Regional Government, Najirvan Barzani and Iraqi Prime Minister Haider Abadi in Baghdad and Davos. The two sides reach solutions to all problems in accordance with the Iraqi constitution.

The statement pointed out that Barzani thanked the continued support and military cooperation of the Peshmerga forces in the war against the dossier and secure weapons and training and training Peshmerga, expressing the readiness of the region to resolve all problems with the federal government on the basis of the Iraqi constitution.

The statement noted that General Fotel confirmed the continuation of US military assistance to the Peshmerga forces.

The statement pointed out that the discussion of the situation in general and the war against terrorism in Iraq and Syria in particular was another aspect of the meeting, indicating that the two sides stressed that the defeat of terrorism will not only be achieved by the military side, but must formulate a program to eliminate and defeat ideas and programs for terrorists.

The Kuwait International Conference on the Reconstruction of Iraq began on Monday.

The event was launched with the participation of hundreds of major international companies, organizations and financial institutions.

{Baghdad: Euphrates News} Agency received {Euphrates News} an official letter to the Secretariat General of the Council of Ministers addressed to the Finance Committee in the House of Representatives in which it is not possible to continue to withhold amounts from the salaries of employees.