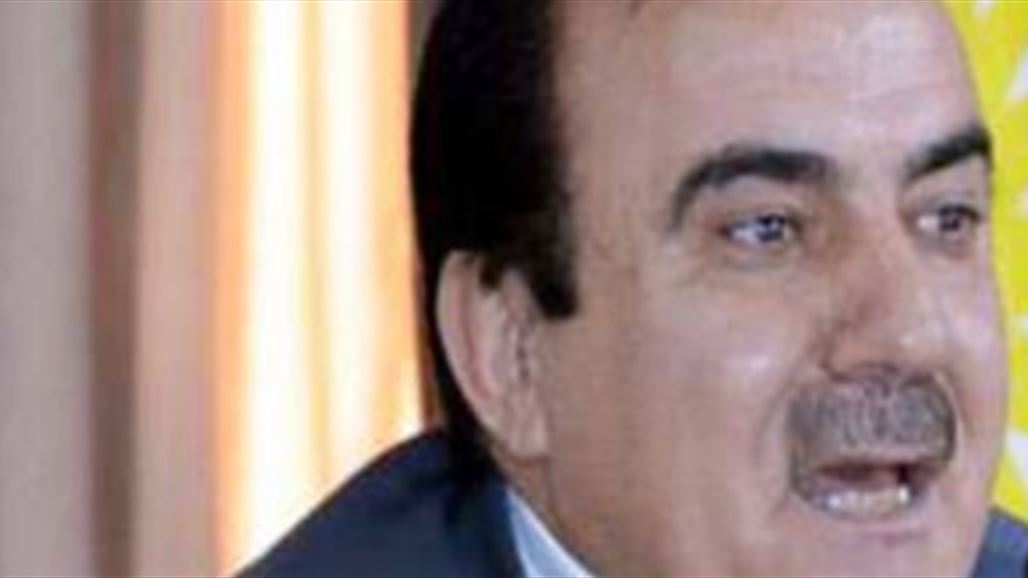 Baghdad
threatened the head of the Patriotic Union of Kurdistan parliamentary ares Abdullah , on Tuesday, to resort to the Federal Court and the International Monetary Fund in the event of passing the budget law the government ‘s wishes more satisfactory, calling for the need to achieve consensus and give all the components of their rights fairly and in accordance with the Constitution.

Abdullah said in an interview for Alsumaria News, “The House of Representatives went to discuss the federal budget, despite the absence of a quorum,” noting that “the political blocs if they want to pass the budget without consensus with the Kurdish blocs or approval, this will carry a message is reassuring for the people of Kurdistan” , Noting that “the government imposed its will on the House of Representatives and unwilling to solve problems with the Kurdistan region .”
Abdullah added that “all the options we have in the event of passing the budget out of consensus, including recourse to the Federal Court and the International Monetary Fund, which set conditions for continued support for Iraq to give the region need of the budget may be forced to resort to political boycott,” pointing out that “we demanded and we will continue to demand the amendment of allocations The regions and the Sunni areas and the oil-producing provinces or otherwise we will not attend any meetings devoted to discuss the budget. ”

“We do not want to block the passage of the budget, but we want it to be fair and fair to all components and do not demand more than our legitimate rights constitutionally, and the lack of agreement on these rights is unacceptable.”

The deputy for the province of Nineveh Abdul Rahim al-Shammari, called on Monday, to postpone the vote on the federal budget for 2018 until the end of the conference of donor countries in Kuwait.

The MP for a coalition of state law, Abbas al-Bayati, on February 4, 2018, the collection of signatures to include the draft federal budget law for the current fiscal year on the agenda of the next session of parliament, between the project is ready for the second reading.

Baghdad ,
said the parliamentary Finance Committee member Masood Haider, Tuesday, the IMF will provide to Kuwait conference negative for a report on Iraq if it passed the budget in its current form, while noting that Prime Minister Haider al – Abadi agreed presented by representatives of the Kurdish component on the rights of the province solutions Budget.

Haider said in an interview for Alsumaria News, ” The International Monetary Fundstipulated the Iraqi state as a parliament and the government of the need to commit to the need of the Kurdistan region Within the federal budget, otherwise there will be no third report by him to provide loans to the Iraqi state, which is in dire need, “noting that” it will also include a negative report by the Fund during the conference of donor countries in Kuwait for donor countries and companies wishing to help Iraq.
“We, as representatives of the Kurdish component, have solutions to the benefits of the province in the budget and within the total amount of them,” he said, adding that “the prime minister expressed during his last meeting with us his approval of these solutions, but we must hold a technical meeting with the prime minister to finalize them in order to send them To the Council of Ministers to vote it and then send it to the House of Representatives. ”

The MP Zana Said, on Monday, that the IMF stipulated that the support of the Iraqi government in the columns of the donors in exchange for the allocation of 10 trillion dinars of the budget, or 14% of the Kurdistan region.

The balance of Iraq for 2018, which came from the government to the House of Representatives has set the share of the region under Article 9 first and second by 12.67% of the total actual expenditure “current expenditures and expenditures of investment projects” and according to the souls of each province after the exclusion of sovereign expenses.

The International Airport of Sulaimaniyah confirmed on Tuesday that there are no restrictions on lifting the international air traffic ban on airports in the province.

“All the obstacles to lifting the ban on international flights to airports in the region have been removed,” the Kurdistan National Union (KNA) website quoted Sulaimaniya airport director Tahir Abdullah as saying. “The provincial and Baghdad governments have agreed on all points of contention.”

(Baghdad: al-Furat News) The MP of the National Alliance Jassem Mohammed Jaafar, the presence of US forces in Iraq was approved by the federal government and under its supervision.
“The occupation ended with the departure of the Americans in 2011, and the forces currently present forces with the consent of the government,” Jafar told the program {boldly} broadcast by Al-Furat satellite channel.
He added that “the agreement between the government and US forces leads to the absence of any armed forces on Iraqi territory,” noting that “the participation of US forces came because of the military capabilities and protect the space of Iraq and the participation of advisers of Iraqi officers.”
Jafar said that “there is a specific program to remove all heavy American weapons as agreed between the two governments and the US government should respect Iraq’s desire to get the last American soldier out of it.”
http://alforatnews.com/modules/news/article.php?storyid=159156

11:19
Last updated
The time now is 11:29 AM
Baghdad / Al-Ghad Press:
MP Majida al-Tamimi said on Tuesday that the lack of approval of the budget will affect the view of the donor countries to Iraq, while indicated that the delay is due to the conditions of international criticism and demands of the blocks.
Al-Tamimi told Al-Ghad Press that “the meetings continued in the Finance Committee on the budget, and there were two meetings with the Prime Minister Haider Abadi.”

He added that “yesterday asked me put the budget on the agenda for the second reading, and there was pressure from the Kurdish blocs not to proceed with reading.”
“The Kurdish blocs demand a meeting with the Prime Minister to give them guarantees to meet their demands,” noting that “the meeting was not lifted and will resume on Sunday, so as to give the Kurdish blocs the space for dialogue and discussion with Abadi and reach understandings on passing the budget.”
“The failure to approve the budget means that the country is not a plan to manage its funds, and this affects the view of donor countries and shows them that we are a country without a law without a plan, how to give investment funds.”
“This is considered a black point in the history of budgets in the event that it has not been approved,” she said, pointing out that “it was caused by delayed adoption of the conditions of international criticism and the year of election and increase requests of the blocks to try to prove itself to its audience.”
The House of Representatives has seen several months ago, disagreements between the political blocs on the budget items of 2018, which leads in each meeting to postpone put them on the agenda, and attended the Prime Minister Haider Abadi to Parliament more than once for the purpose of discussing the demands of the political blocs.
He called on the Kurdish blocs and the Union of forces and oil-producing provinces, to put their requirements in the budget or otherwise boycott the parliamentary sessions of their own.

The Ministry of Finance in the Kurdistan Regional Government on Tuesday, the date of payment of salaries of the Ministry of Education and agencies:

BAGHDAD – Prime Minister Haider al-Abadi revealed on Tuesday new details of deductions in the salaries of employees and retirees, and said that the House of Representatives insisted on the inclusion of the deduction in the budget of 2017 despite the opposition of the government, and the parliament can lift it and not work because of its authority on the subject.

Abadi said during the weekly press conference that “the current deduction of salaries of employees and retirees of 3.8 was proposed by the House of Representatives in 2016 and was applied in the budget in 2017.”

BAGHDAD – The Iraqi cabinet voted Tuesday to accede to the 1958 New York Convention on International Arbitration in Commercial Disputes.

“The Cabinet held its ordinary session under the chairmanship of Prime Minister Haider al-Abbadi, and the Cabinet allocated part of its meeting today to review the achievements of the government program, in particular the great achievement of the liberation of the provinces Which was raided by the terrorist and the maintenance of the unity of the country and security progress and economic and financial measures in the light of the low oil prices, and what was accomplished by the ministries despite the circumstances of war and the financial crisis. The ministers also presented what has been achieved in their ministries within 3 years and obstacles and challenges faced by they”.

The cabinet voted “on key recommendations to ensure sound investment in Iraq and voted to release loans in liberated areas.”

The Cabinet voted “on the instructions to conclude partnership contracts between the public and private sectors.”

The Convention on the Recognition and Enforcement of Foreign Arbitral Awards [New York, 1958] is called the [New York Convention] and entered into force on 7 June 1959.

The objectives of the Convention are to recognize the growing importance of international arbitration as a means of settling international trade disputes. The Convention on the Recognition and Enforcement of Foreign Arbitral Awards seeks to provide common legislative criteria for the recognition of arbitration agreements as well as the recognition and enforcement of foreign and non-domestic arbitral awards by the courts.

The term “non-domestic” appears to include arbitral awards which, although issued in the enforcement State, are treated as “foreign” under the law of that State because of the presence of a foreign element in the proceedings, for example in the application of the procedural laws of another State.

The main objective of the Convention is to seek non-discrimination against foreign and non-domestic arbitral awards; therefore, the Convention obliges States parties to ensure that such decisions are recognized and generally considered enforceable in their jurisdictions in the same way as domestic arbitral awards. A further objective of the Convention is that it requires the courts of States parties to make arbitration agreements fully effective by requiring the courts to deny the parties access to the court in breach of their agreement to refer a dispute to an arbitral tribunal.

The US State Department announced on Tuesday that Iraqi forces were equipped with a new weapon.

“Iraqi border guards received equipment from the International Coalition to perform their duties in Anbar province,” the State Department said in a statement.

“The process of solid resolve and the Iraqi security forces must ensure the conditions to prevent the return of a terrorist organization and its ideology, maintain pressure and exploit success,” the statement said.

Baghdad has announced the reduction of the number of US troops in Iraq, after the end of the era of control is urging.