(Baghdad: al-Furat News) revealed the Finance Committee parliamentary, the arrival of Prime Minister Haid al-Abadi and the coalition of Iraqi forces to an agreement on controversial articles in the draft law of the state budget for the year 2018.

Committee member Majida al-Tamimi told Al-Furat satellite channel yesterday that an agreement was reached during the talks between the Prime Minister and the Alliance of Forces on their demands for the budget. “She

pointed out that the two sides reached an agreement on” the government’s disbursement of salaries to employees audited security in the provinces and areas that have been occupied by gangs Calling for the terrorist, and the distribution of cash instead of the provisions of supplies that were not handed over to the residents of the provinces and areas that were under the control of a preacher. ”

She also reached an agreement” on the commitment of the federal government to transfer the powers contained in Law No. 21 of 2008 and “He

The coalition of forces also asked Abbadi to “pay 400 billion dinars from the Ministry of Displacement and Migration distributed to the displaced.”

The Rafidain Bank directed its branches in Mosul to receive requests from citizens and provide the best banking services to them.

“The bank’s general manager Khawla Talib Jabbar visited the bank’s branches in Mosul and was briefed on the reality and progress of its work after being rehabilitated as a result of the damage suffered during the period of control,” the bank’s press office said in a statement.

The statement pointed out that “the Director General of the Bank urged the staff to make more efforts and work to develop these branches and show them properly and expedite the completion of applications of citizens and employees and retirees and resume work in respect of all banking activities and facilities.”

(Baghdad: Al-Furat News) A member of the Finance Committee of the parliamentary insistence of Prime Minister Haider Abadi on the deduction of salaries of employees within the financial budget for the current year.

(Baghdad: Al-Furat News) The member of the Finance Committee Magda Tamimi, the proportion of the Kurdistan region in the current budget will not change, noting that more than 117 trillion dollars Iraq’s internal and external debt.

“The Kurds demanded Prime Minister Haider al-Abbadi, the proportion of the region and they replied that it will be on the proportion of population and demanded the release of salaries of employees, which is reserved and waiting for the audit to launch,” Tamimi told the program.

She pointed out that “they objected to the word northern provinces and Abadi told them that each state north as they objected to the rise of the sovereign expenses, the higher the proportion of the region decreased, and raised the subject of dues of the farmers of 700 billion dinars and the answer of Abbadi that some of them smuggled crops to neighboring countries, A survey was conducted by aircraft and the number of hectares was identified and evaluated. ”

She added that “Abadi stressed that the proportion of the region will not change like the provinces of Iraq, which is constitutional.”

She pointed out that “the existence of debts on Iraq internal and external until the end of 2017 estimated 117 billion dollars and a deficit estimated at 13 trillion dinars,” asserting that “there are still military expenses for the existence of reservoirs and pockets of a little but will be less than before.”

“The amendments to the financial budget for the current year is the addition of 2 trillion dinars emergency allocations, including the compensation of the Kurds and oil-producing provinces and the network of social protections and liberated areas and displaced persons … Followed by a member of the Finance Committee Majida Tamimi 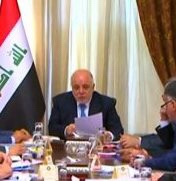 (Baghdad: Al-Furat News) began a few days ago, the meeting of Prime Minister Haider Abadi, with the alliance of forces and Chairman of the Finance Committee parliamentary to complete discussions on the financial budget for the current year 2018.

(Baghdad: al-Furat News) Revealed a member of the parliamentary finance committee on the Kurdistan Change Movement Massoud Haider, that the Kurdish deputies did not demand the proportion of the province in the federal budget for 2018.
“There is no obstruction to approving the budget, but there are demands for an alliance of Iraqi forces, Kurds and oil-producing provinces, which have rights, which is an emphasis on the need to discuss the components and find solutions to be included in the law,” Haider told AFP.
He pointed out that “as a Kurdish component we have held two meetings with the Prime Minister regarding our demands, concerning the formation of a technical delegation between the representatives of the Kurds in the Finance Committee and the government headed by the ministers and the Ministry of Finance to assess the needs of the region and the payment of salaries.
He stressed that “the number of staff in the region 700 thousand employees, which is located in the Ministry of Finance of the region, in addition to the presence of 550 thousand other people who deserve financial grants from retirees and social welfare.”
He added that “the existing committees in the region checked the lists and there is no problem in it, and a report was submitted to the Prime Minister,” hoping “to pay the salaries of the rest, especially the staff of education, health and education.”
“We did not talk about any proportion in the budget of 2018 related to the region, but we will focus on the need of the region and we hope to get to common points with the federal government.”