In a statement issued by the US State Department at the end of his visit to Iraq on January 29-30, the American diplomat called on Abadi to continue to work with both the President of the Kurdistan Regional Government of Iraq Barzani and his deputy Qabad Talabani to reach agreements On issues affecting the lives of citizens such as the payment of salaries and the return of international airports to work and resume flights within the framework of the Iraqi constitution.

He also assured the Iraqi prime minister of Washington’s support for the reconstruction efforts and stimulate the economy in Iraq, and discussed with him the development of relations between the two countries, according to a statement issued by the office of Abbadi.

Nijervan Barzani met with Abbadi in Baghdad for the first time since the referendum on September 25 on the independence of Kurdistan, which Baghdad described as illegal and caused a severe crisis between the federal government and the region. 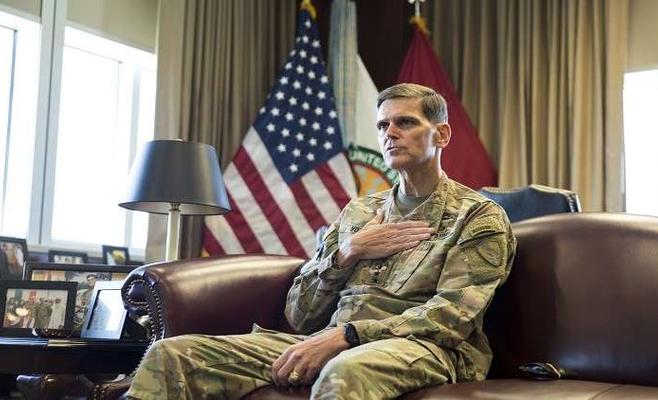 The commander of the US Central Command, “CENTCOM” General Joseph Futil said that the organization “Daash” will be defeated militarily within weeks.

During a visit to Jordan, Bouteflika said Monday that “the date of the defeat of a military advocate” would be “within weeks”, adding that “fierce fighting” is now taking place in the Euphrates basin.

“With defeat in Da’ash, the hidden tensions that have always existed in Syria are emerging,” he said. “This makes efforts for a political solution difficult.”

The commander of the Central Command in charge of US forces in the Middle East and Central Asia, met with King Abdullah II, and discussed with him recent regional developments, especially the war on terrorism.

Khandan –
A source in the Ministry of Finance in the Kurdistan Regional Government in a statement to “Khandan” about the arrival of money from Baghdad to the branch of the Central Bank of Iraq in Erbil.

The source said that the Ministry of Finance is waiting for the arrival of an official letter from the Iraqi government for the disbursement of funds.

MP Massoud Haider, a member of the Finance Committee in the Iraqi Council of Representatives had announced in a previous statement to “Khandan” that the Iraqi government sent 250 billion dinars to the Kurdistan region to secure salaries.

Baghdad has taken steps to ease the sanctions it imposed on the Kurdistan region following the referendum on the separation in September, at a time when Kurdish officials expressed optimism about the near solution to the current crisis between the parties.

The MP from the Finance Committee parliamentary, Massoud Haider, in a press statement, “The Iraqi Ministry of Finance instructed, on Monday, to the Central Bank of Iraq to spend 250 billion Iraqi dinars to the Kurdistan region,” noting that “part of the amount has reached the region Indeed, the remaining part will arrive in the next few days. “

For its part, quoted the network “Ruda” Kurdish media source in the Ministry of Finance in the Kurdistan region, “a batch of funds allocated from Baghdad to Kurdistan has arrived, but the amount is not known yet,” pointing out that “the region is waiting for a book from Baghdad on how to exchange the amount”.

These developments come after a meeting between Iraqi Prime Minister Haidar al-Abadi and Kurdistan Regional Government President Nigervan Barzani in Baghdad and then in Switzerland on the sidelines of the Davos Forum , where officials described the meetings as “investors.”

For his part, the MP for the wisdom movement, Aziz Kazem, said in a press statement that “the Iraqi parliament voted today, a decision on the need to avoid the need for previous actions on banking transactions with financial institutions in the Kurdistan region, after achieving the desired goal on the subject of banks, .

He added that the parliament “required the central bank to submit monthly reports to the Committee on the powers and practices of banks, and its role in maintaining public money.”

Kurdish officials are optimistic that the crisis between Baghdad and Erbil will soon be resolved and a direct political dialogue will begin between them.

The Kurdish leader, Mahmoud Othman, said in a statement to the “new Arab”, that “the last two meetings between Haider Abadi and Najarvan Barzani, were productive, and a boy in the interest of resolving the crisis,” noting that “the dialogue will continue between Baghdad and Erbil in the coming period.”

Sources have revealed, earlier, the “new Arab”, the desire of Abadi to resolve the crisis with Kurdistan, and open the door to dialogue with them, in conjunction with the formation of electoral alliances, where Abadi fears the exploitation of some parties to the crisis to achieve political gains.

(Reuters) – Four new investigative committees will head from Baghdad on Tuesday to the Kurdistan region, according to government sources in the Kurdistan Region.

The Parliament voted in the eighth ordinary session of the second legislative term for the fourth legislative year, which was held under the chairmanship of Salim al-Jubouri, Speaker of the House of Representatives and the presence of 166 deputies on Monday, the decisions of the deputies and ended the reading of four laws, including the federal budget for the year 2018.
A statement by the Information Department of the House of Representatives received the agency {Euphrates News} a copy of it today, “At the outset of the session the Council voted on a decision submitted by the Finance Committee indicates the absence of the need for measures taken previously by the House of Representatives on banking transactions with financial institutions in the Kurdistan region after verification The objective required to be committed to the Central Bank to submit monthly reports to the Committee on its powers and practices in the region and its role in maintaining public money.
Then the Council voted to approve a decision to double the penalty of absence of deputies to one million dinars.
He stressed Jubouri that “the law of the Union of Parliamentarians does not include material or moral privileges to its members, stressing that what has been circulated is a disgrace for health, noting that the interrogations submitted will be on the agenda in future meetings in accordance with the established contexts.
The Council also approved the addition of questioning Qasim al-Fahdawi, Minister of Electricity and the first reading of the draft budget law for the current year on the agenda of the session.
The President of the House of Representatives to extend an invitation to host Haider Abadi, the Prime Minister in a meeting on Wednesday to discuss the draft federal budget law at the request of the parliamentary blocs.
On the other hand, MP Ali Abdul Jabbar Shweileh to follow up the problem of bird flu epidemic spread in a number of provinces and poultry fields.
For his part, MP Fratt al-Tamimi, Chairman of the Committee on Agriculture, Water and Marshlands said that there were recorded cases of bird flu epidemic in a number of provinces and led to damage to the poultry breeders sector, calling for finding a suitable formula to solve the problem.
In turn, Al-Jabouri directed the committees of agriculture, water, health and the environment to follow up with the executive to brief the council on the epidemic.
On the other hand, the Council completed the first reading of the proposed law to include the contractors of the Sons of Iraq (Awakening) to the Ministries of Defense and Interior and submitted by the Security and Defense and Legal Committees, which aims to resolve the subject covered by the Diwani Order No. (118 / Q) for the year 2008 of the sons of Iraq (Awakening) To contribute to the stability of their legal situation and for the purpose of benefiting from their experience in the control of security and stability and appreciation of their positions in support of security forces in the implementation of its duties.
The Council completed the first reading of the proposed law of the Institute of Sports Management, submitted by the committees of youth, sports and legal, which came to develop sports departments and staff qualified to work in the field of sports management and to improve the performance of employees and keep pace with the development of the world in the field of sports management.
The Council concluded a report and discussion of the proposed amendment to the first CPA Order
} No. 2 of 2003, submitted by the Youth, Sports and Legal Committees and civil society organizations.
In the interventions of MPs, MP Riad Gharib stressed the importance of taking the government’s opinion to submit a draft law in coordination with the Olympic Committee in order to prevent it and avoid any financial consequences.
MP Abbas al-Bayati said that there are international laws that provide cover for the work of the Olympic and Paralympic Committees, calling for continuation of the work of the two committees according to their current situation since the issuance of the decision of the former civil governor.
In its response to the interventions, the committee stressed that the Iraqi Olympic Committee is acting in accordance with a decision issued at a meeting in Dokan city, calling for the removal of the Olympic Committee from the decision of the dissolved coalition authority only in accordance with a new law.
Then the Council completed the first reading of the draft federal budget bill for the year 2018 for approval.
Then it was decided to resume the session on Wednesday 31/1/2018
http://alforatnews.com/modules/news/article.php?storyid=158626