Iraqi political sources revealed on Tuesday there had beenprogress in negotiations between  the Iraqi government in Baghdad and the Kurdistan Regional Government of Iraq toresolve disputes which worsened on the back  of a referendum secession from Iraq , which was conducted in September / September last.

A source close to the Iraqi government that the negotiations between the two sides focused on the subject of the share of the province of the federal budget , as well as the launch of salaries of staff of the region, and opening ports and airports, pointing to the “new Arab” to the existence of flexibility by the two sides to resolve outstanding issues.

He pointed to the Kurdish party’s proposals, which are being studied by government committees, indicating that the agreement was to  avoid escalation and work to adopt the letter of calm under the Constitution.

The Iraqi Kurdish MP, “Kurdish Democratic Party,” Ashwaq dry, that the Kurdish political forces presented nine proposals to the Iraqi Prime Minister, Haider Abadi, to resolve the differences, especially regarding the budget of 2018.

And showed that the Kurds stipulated to offer Abbadi a pledge not to appeal the budget paragraphs on the rights of oil-producing areas, including areas in Iraqi Kurdistan, noting that the Kurdish blocs working to discuss their demands on the budget with Abadi.

Meanwhile, the head of the Kurdistan Regional Government of Iraq, Nigervan Barzani, arrived in Switzerland to participate in the economic forum “Davos,” according to a statement of the regional government in which he said that Barzani and his delegation will participate in the forum, which will be attended by US President Donald Trump, presidents and kings and officials from different countries.

Kurdish political sources suggested that Barzani would put the crisis between Baghdad and Erbil during his meetings with senior officials there, stressing to the “new Arab” that the Iraqi Kurdistan government opened the doors of dialogue with Baghdad, but at the same time counting on the support of the international community to lift the embargo and get its share of the budget in case Negotiations with Baghdad have reached an impasse.

The Minister of Health in the Kurdistan region of Iraq, Rikut Hama Rashid, earlier in the day that a Kurdish delegation under his chair will visit Baghdad next week to meet with Iraqi Health Minister Adela Hamoud on the region’s share of medicine.

He stressed that the year 2018 will be better for the region in terms of drug allocations, indicating during a press conference that the region needs to 100 billion Iraqi dinars (equivalent to 80 million dollars) during this year.

He added that “our relationship is serious with the Federal Ministry of Health, and I will visit Baghdad next week to discuss the share of the region,” noting that the Ministry of Health in Baghdad allocated 6 billion dinars ($ 4.8 million) per month to buy medicine for the region.

A Jordanian newspaper revealed on Tuesday that three competing for the implementation of the Iraqi-Jordanian pipeline project, which will extend from Basra to the port of Aqaba.
Al-Ghad newspaper reported in a report that the parliamentary energy committee submitted to the Economic Committee of the Iraqi Council of Ministers the Iraqi-Jordanian pipeline project which will extend from Basra to the port of Aqaba.
The newspaper quoted a member of the Committee, the Iraqi MP Zaher Abadi, said that “the relevant committees for this project has been formed, has been submitted to him and was referral,” noting that there are 3 companies compete for the project after it was 35 companies.
He explained that the “contract project” has not been signed so far, and we hope that it will be signed in the coming days, after the completion of the Economic Committee of the Council of Ministers of the process of ratification and approval to enter into force.
He explained that the “oil pipeline project” was divided into two phases, the first from Basra to Najaf city, and then from Najaf to Aqaba, south of Jordan, noting that “the project in the part extending from Najaf to Aqaba” referred to the ” (3.19) per barrel and offered the referral to the Council of Ministers and was ratified several months ago did not sign the contract so far.
“The part extending from Basra to Najaf has advanced several companies to him, but is likely to be referral to a coalition,” stressing that “negotiations are currently underway to determine the price of tariffs.”
Abadi pointed out that the mechanism of work of the project is that “Iraqi oil exports from the fields of Basra through the Iraqi territory and to the Kingdom to the port of Aqaba,” explaining that Jordan “will spend money for oil passing through its territory, and these amounts used by Jordan to pay Iraqi oil Which imports from Iraq at a preferential price, and cost the Kingdom billions of dollars annually.
“In the case of increased transit amounts for the amounts of oil imported to Jordan from Iraq, Jordan will receive the remaining money for the cost of transporting oil through the territory of Jordan (transit), and this project will” provide Jordan with freight transport by trucks that were carrying oil To the Kingdom. ”
Abadi said that Iraq is keen to develop its relations with the Kingdom, as this is a pipeline of strategic projects between the two countries, which is expected to contribute to expand the horizons of economic relations, and provides additional employment opportunities and develop the economic reality and living thanks to economic imports of both countries, Iraq, which is witnessing an increase in its oil exports, “needs multiple outlets linking its oil to global markets.”
On the other hand, oil sources confirmed that the project pipeline from Basra to Aqaba, “is an investment project primarily, and a consortium of companies to create and spend it and then recover part of its investments after the operation,” adding that “Iraq will not spend on this project any money, Which is extending the pipeline. The agreement includes supplying Jordan with a portion of the quantities of oil passing through its suburbs at the prevailing price and according to its needs. The other part of the oil goes to export, which confirms that it will be a strategic line that is expected to reach North Africa via Egypt.
The cost of the pipeline project Basra – the final obstacle estimated at 18 billion dollars, and extends 1,700 km, the amount of oil that will reach the port of Aqaba through one million barrels per day, to be converted 850 thousand barrels to the Jordanian oil refinery, and 150,000 barrels covering Local Jordanian Needs.

PM @HaiderAlAbadi will attend @wef and will lead the Iraqi delegation in Davos. PM will meet with fellow world leaders, entrepreneurs and investors to present the @IraqiGovt economic reform agenda and to invite the world to invest in rebuilding Iraq together #InvestIraq #wef18

A senior delegation of the Kurdistan Regional Government (KRG), comprising four governors, arrived in Baghdad on Tuesday at the official invitation of the federal government.

The sources pointed out that the Iraqi Council of Representatives invited the governor of Halabja and his deputy, as well as the governors of Sulaymaniyah, Arbil and Dahuk to participate in a conference on the issue of decentralization and a number of other axes. The media office of Prime Minister Haider Abadi said on Tuesday that the latter went to Switzerland to participate in the Davos Economic Forum.

The office said in a statement that ‘Prime Minister Haider Abadi went to Switzerland to participate in the World Economic Forum in Davos’.
https://translate.googleusercontent.com/translate_c?depth=1&hl=en&rurl=translate.google.com&sl=ar&sp=nmt4&tl=en&u=http://www.dijlah.tv/index.php%3Fpage%3Darticle%26id%3D205840&usg=ALkJrhhBIpCf-m0FtcfbtvUjANPT8YSdGg

[Ayna-Baghdad]
Prime Minister Haider al-Abadi, on Tuesday hoped that the budget is not lost in the whirlpool of differences between the political blocs, announcing the vote of the Council of Ministers on the law of the law of graft to prosecute corrupt.
“The Council of Ministers voted on the bill of illegal gain to hunt down the corrupt,” Abbadi said at his weekly conference.
“The government is keen to provide jobs for all Iraqis by attracting investments,” he said.
Abadi said that “it is the duty of the government to ensure the safety of the elections, and we have stated openly that the parliamentary elections will be conducted according to constitutional times and we are committed to it, and there are those who wanted to push the elections to continue to take charge for a certain period,” pointing out that “the decision of the Federal Court and the vote of the House of Representatives Close the door to those who want to postpone the elections. ”
On the budget law, Abbadi said he was “ready to attend parliament and discuss its committees on their objections to the budget law.”
On security developments, Abadi stressed that “intelligence and security work continues unabated and our country has complete plans in this regard. It is not safe for terrorists anywhere in Iraq. We will pursue those who train terrorist elements and provide them with money to send to Iraq.”
“I will go to the economic conference in Davos and meet big companies and world leaders to attract them to invest in Iraq,” he concluded.

The @IraqiGovt will attend @wef to present its economic vision, highlight opportunities for foreign investment and build relationships with international companies to support rebuilding Iraq #InvestIraq 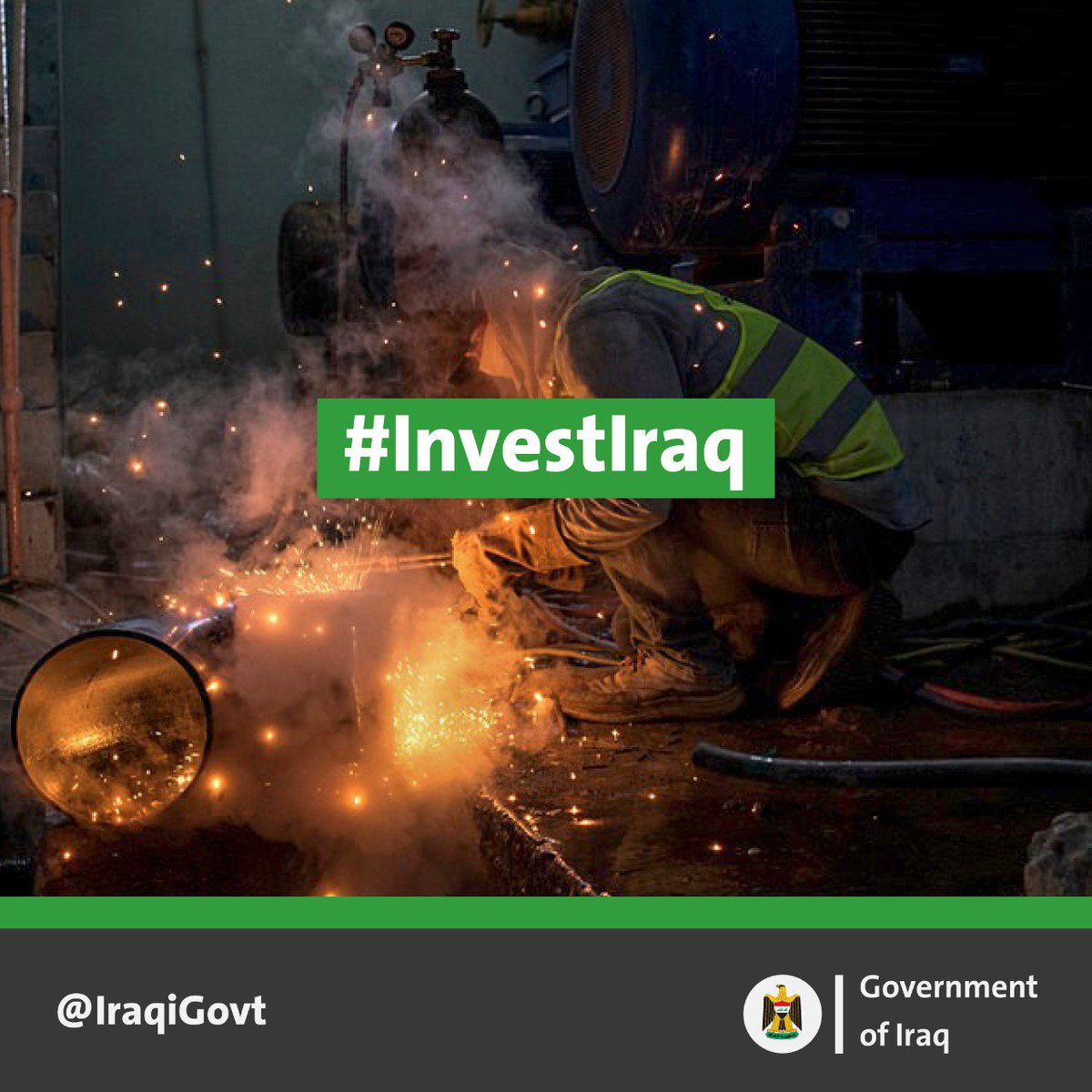 Baghdad: Iraqi Prime Minister Haider al – Abadi  said that his government succeeded in overcoming the crisis of the referendum in the Kurdistan region, and accused the Turks that they were dealing with the Kurdish file duality.

“His government succeeded in overcoming the crisis of the referendum on secession without bloodshed and is working today to solve all the outstanding problems with the region, including problems since the 1990s,” Abadi said during a meeting with a Kuwaiti media delegation.

He said that the Turks were dealing with the duality with the Kurdish file: “They supported the Kurds of Iraq and deal with them outside the framework of the federal government while denying the rights of the Turkish Kurds, until the issue of the referendum and felt the threat changed the view of the Turks towards rapprochement with Baghdad.

Abadi pointed out that “this does not mean a negative attitude of his government against the Iraqi Kurds, but they are citizens in their country have citizenship rights and duties.”

He added that the Turks have great fears of the PKK in northern Iraq, stressing that his country “does not support this organization and do not want to take from Iraqi territory as a base for the attack on Turkey.”

Kuwait is hosting a conference on the reconstruction of Iraq from February 12 to 14 with the participation of a number of donor countries and international and regional organizations. It will be chaired by five parties – the European Union, Iraq, Kuwait, the United Nations and the World Bank. (AFP)

The Davos Economic Forum kicked off Tuesday and will continue until Friday, with businessmen and dignitaries from various countries to discuss economic issues that are troubling the world.

“Russia is participating in Davos this year with a large government delegation led by Deputy Prime Minister Arkady Dvorkovic, including Energy Minister Alexander Novak and a number of officials, as well as representatives of Russian companies,” the agency said.

“The World Economic Forum organizes the Davos Forum annually and hosts prominent leaders in various economic and political issues and discusses most of the thorny issues facing the world.” The 48th session of the Forum is attended by about 340 prominent political figures, including 70 heads of state and government , And 38 head of an international organization ‘.