[Where Follow-up]
US Vice President Mike Pence arrived in Israel on Sunday , January 21.
The Israeli Tourism Minister received the US Vice President at Ben-Gurion Airport in Tel Aviv and made no statements to journalists before heading to Jerusalem.
Israeli Prime Minister Benjamin Netanyahu called Pens a “great friend”.
The Palestinians ignored Pence because of Washington’s recognition of Jerusalem as the capital of Israel.
Pines is the highest-ranking American official to visit the region since US President Donald Trump announced December 6 recognition of Jerusalem as the capital of Israel and pledged to begin the process of moving the US embassy to the city, whose status is central to the Israeli-Palestinian conflict.
http://www.alliraqnews.com/modules/news/article.php?storyid=70535 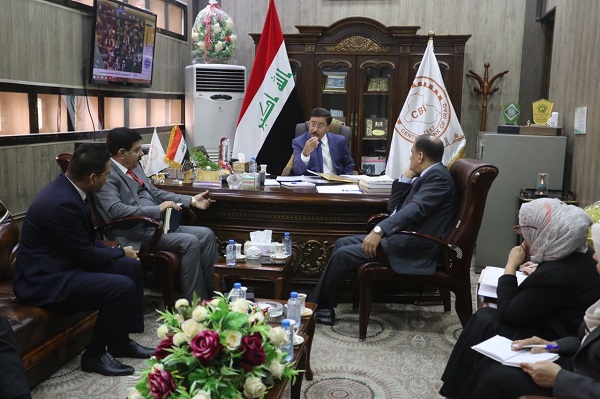 In his visit to the branch of Basra: Governor of the Central Bank confirms the continued support of the banking sector in all of Iraq

The Governor praised the work of the branch staff, stressing that the Iraqi Central Bank support the banking sector working in Iraq 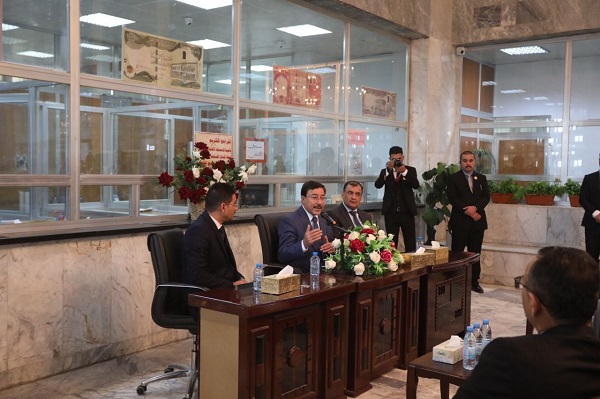 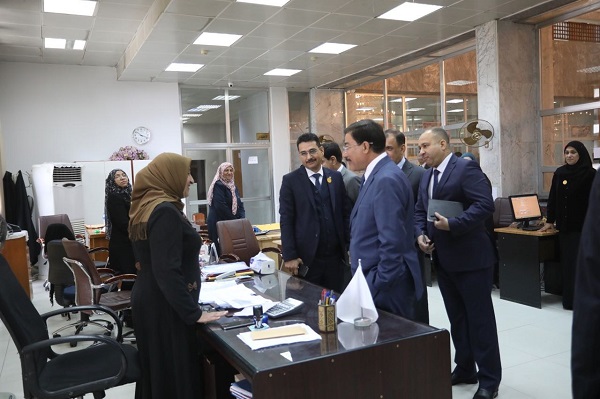 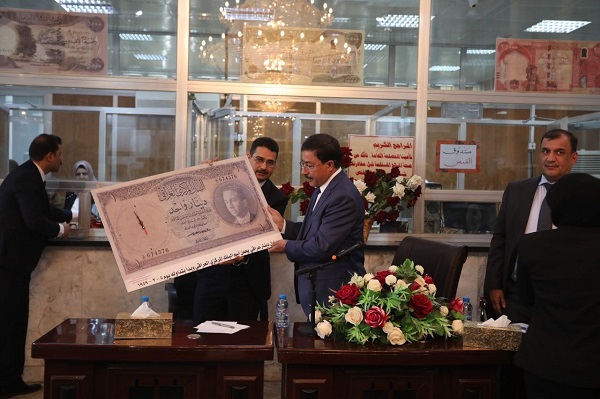 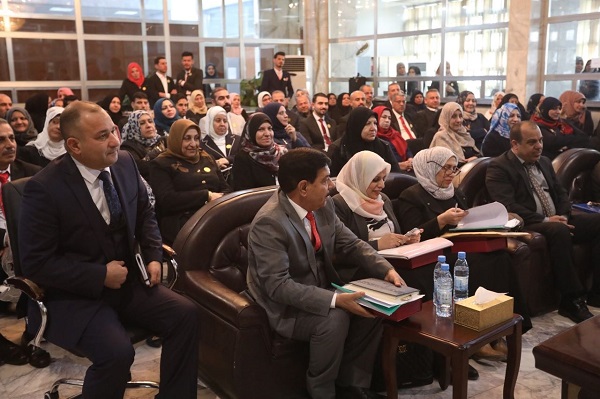 (Baghdad: Al-Furat News) included the meeting of the Presidency of the Parliament with the heads of parliamentary blocs today to resolve the election law and introduce the budget in the parliament session for tomorrow.
A parliamentary source told the {Euphrates News} today that “the decisions of the meeting included the issuance of a resolution of the House of Representatives to set a date of 12/5 date for the elections taking into account the controls inspired by the Council of Ministers Resolution No. 347 of 2017 to form a committee of the Council to follow the implementation of the requirements of the elections far from Political character “.
He added “as well as hosting the security agencies to prepare the success of the elections, and to set a date to host the Prime Minister.”
He continued, “How it was decided to be in the meeting tomorrow morning morning, the election law is resolved by listening to the opinion of the Legal Committee.”
“Local elections have two options, either to silence the council and leave the matter to the government or to put the council on the dates of the first 12/5 or postponement for 3 or 6 months,” he said.
The source pointed out that “the budget is presented to the evening session in the afternoon.”
http://alforatnews.com/modules/news/article.php?storyid=158239

Will arrive in Erbil tomorrow, the financial control committees for the purpose of auditing the salaries of the ministries of education and health in the Kurdistan region.

“The Federal Financial Control Committee to check the salaries of employees of the Ministries of Education and Health will arrive in Erbil on Monday, and the committee will come to Erbil from Kirkuk, and meet first privately with the ministers of health,” said Vian Mohammed, director of planning in the Ministry of Health in the Kurdistan region. And education, and then start its work.

A delegation from the ministries of health and education in the Kurdistan region has carried to Baghdad payrolls of the staff of the two ministries for the month of December 2017 to be audited at the request of Baghdad, and the delegation of the Territory to two visits to Baghdad so far.

Localities
19:47
Last updated
The time now is 07:54 PM
Baghdad / Al-Ghad Press:
The Ministerial Economic Affairs Committee, chaired by Planning Minister Salman Jumaili, announced Sunday that it will take a number of decisions during its second session.
A committee statement received by Al-Ghad Press, a copy of which was received by the Minister of Transport Kazem Vajan Al-Hamami and the advanced owners of the Ministry, as well as the Director General of Al-Rasheed Bank and the General Manager of the General Company for Grain Manufacturing. The Chairman of the National Authority for Investment and Economic Adviser to the Prime Minister and Head of the Legal Department in the Office of the Prime Minister and the Ministers of Finance and Trade.
He added that “the committee decided to allow Iraqi publishing houses and authors of books in Iraq to export their publications without obtaining the export license, and the approval of the two companies for the manufacture and trade of grain in the Ministry of Commerce to import wheat for the national mills for the production of flour zero according to a mechanism prepared by the two companies in coordination with Owners of mills provided that the leakage of imported wheat to the marketing outlets in coordination with the Ministry of Agriculture that the experiment is reviewed every six months, “noting that” the decision aims to support the private sector and provide food security for citizens and the advancement of the reality of economic policy baskets Providing foreign currency and manpower. “
He added that the committee decided to adopt a policy of supporting the national industry and employing local labor by encouraging exports by allowing the export of a number of materials including gravel, wood, broken stone, sand and sand, and urging the private sector to export manufactured dates, And the promotion of food industries. “
He added that “the committee decided to approve the completion of the building of Al-Nu’man Hospital in Adhamiya with the aim of upgrading the medical services provided to citizens and developing the health situation in the capital and training doctors.”
https://translate.googleusercontent.com/translate_c?depth=1&hl=en&rurl=translate.google.com&sl=ar&sp=nmt4&tl=en&u=https://www.alghadpress.com/news/Iraq-News/139112/AlghadPress&usg=ALkJrhgdKPQsnlflHE3y2BtrfVN7kTRXhg

The Central American Central Command, General Joseph Fotel, said Sunday that his country supports Iraq in all fields, pointing out that Washington is impressed with what has been achieved in Iraq from the victory over gangs.

A statement issued by the Office of Abadi received «Journal News», a copy of it, that “the Prime Minister Haider Abadi, received in his office today, the Central Command Central Command General Joseph Fotil and his delegation,” noting that “the meeting was discussed cooperation Between the two countries and the regional situation and the final elimination of terrorism. ”

Abadi stressed, according to the statement, “the continuation of the government’s work to secure its borders and not allow the infiltration of terrorists,” noting “the importance of consolidating the state of victory and security stability and the direction of reconstruction and construction and stimulate the economy.”

For his part, General Votel renewed “his country’s full support for Iraq in all fields,” noting “admiration for the victory in Iraq of the victory of the gangs of the terrorist.”

The deputy and leader of the Dawa Party Ali al-Aalab near the start of a wider round of dialogues and a more formal character between the Kurdistan government and the central government, while stressing the Prime Minister’s quest to resolve the outstanding problems with Kurdistan within the framework of the Constitution and grant them dues like the rest of the provinces of Iraq provided they abide by their entitlements towards Country.

Alaq said in a press statement that the technical committees of both parties and during their meeting on Saturday brought the talks to the stages described by good communication and paved the ground for greater openness between Prime Minister Haider Abadi and Kurdistan Prime Minister Nechervan Barzani, noting that these committees discussed several files, And the payment of dues to export oil and commitment to make the border crossings under the management of the federal authority and consider the Peshmerga forces as part of the Iraqi security system as well as the issue of oil fields and border crossings and others.
https://translate.googleusercontent.com/translate_c?depth=1&hl=en&rurl=translate.google.com&sl=ar&sp=nmt4&tl=en&u=http://www.alforat.info/index.php%3Fpage%3Darticle%26id%3D54473&usg=ALkJrhj-6hWzQmkx39A2LvnUU3ZGoWhwsA

The Secretariat said in a statement published today that the Council of Ministers agreed to the Ministry of Finance to pay the salaries of employees and operators of dams in the Kurdistan region of the allocations of salaries of employees of Kurdistan and through the Ministry of Water Resources, where the decision of the Council based on what was presented by the Minister of Water Resources in the third regular session 2018.