A Kurdish deputy in Baghdad, on Saturday, that the Iraqi Prime Minister Haider Abadi decided to allocate 20 million liters of other white oil to the Kurdistan Region.

The deputy MP for the Movement of Change in the Iraqi Council of Representatives, Amin Bakr, on his page in the social networking site “Twitter” a tweet to see by the twilight News, that Abbadi as Chairman of the Higher Committee for Energy decided to allocate 20 million liters of other white oil to the Kurdistan Region, It has already sent 30 million liters previously to a total of 50 million liters.

Bakr said the decision came after demands by Kurdish deputies that the region needed about 150 million liters of white oil.

The Iraqi Ministry of Oil has previously sent 30 million liters of white oil to the Kurdistan region and authorities in the province of Sulaymaniyah currently distributed to citizens in the second place of food in the districts of Azadi and Ali Kamal and a number of other areas of Sulaymaniyah.

Dr. Barham Saleh, head of the Coalition for Democracy and Justice, revealed his vision to end the cycle of crises in Iraq. He stressed that Iraq urgently needs an internal dialogue to address the structural imbalance inherent in the political process. Stressing that dealing with Iraqi crises in the form of fragmented and out of the general structural context, has proved failure over the past years.

Dr. Barham Saleh said that the military defeat of the terrorist organization “Da’ash” in Iraq, and the repercussions of the referendum in the Kurdistan region and the upcoming parliamentary elections, represent pivotal moments in the contemporary history of Iraq. There is an opportunity to correct the path and launch the country towards prosperity and stability desired.

Dr. Barham Saleh added that Iraq is in dire need of an open internal dialogue to address the structural imbalance inherent in the political process that was formed in the aftermath of 2003, and plunged Iraq into a whirlpool of interrelated and harmonious crises, guaranteed and different in form.

Dr. Barham Salih said that corruption is gnawing at the body of the Iraqi state, and that money is the one that financed the violence and the sustainable crisis, stressing that working to dry the swamp of corruption is necessary to end this cycle and prevent the emergence of terrorism again.

Dr. Barham Saleh pointed out that the initiative launched by Prime Minister Haider al-Abadi to fight corruption at the beginning can be built on a legal and scientific methodology that addresses the corruption inherent in the state system and the management of public money.

In this context, Dr. Barham Saleh said that dealing with the Kurdish situation can not be from the position of the victor towards the defeated.

Dr. Barham Salih stressed that the dispute between Baghdad and the Kurdish political leaders should not turn into a punishment against the people, and to ignore the constitutional rights of Kurdistan. The state is called upon to prevent harm to the citizens. The salaries of the employees of the service sectors and the Peshmerga who responded bravely to ” “, And open the door of negotiations between the federal government and the territorial government, and disclosure of financial and oil files, through the federal parliament and the Kurdistan Regional Parliament.

Dr. Barham Saleh said that Iraq needs a comprehensive economic renaissance that leads to the interrelated solutions of its crises, and establishes a culture of competition and economic integration as a substitute for political discord and confrontation.

Dr. Barham Saleh stressed that dealing with the Iraqi crises in the form of a partial and far from the general structural context, proved to fail over the past years, indicating that Iraq has a chance through comprehensive solutions that put things in perspective, explaining that the upcoming elections in Iraq and the Kurdistan region, Be appropriate to compete with the parties in the seriousness of commitment to a comprehensive solution to the spiral of the Iraqi crisis.

Baghdad / Al-Ghad Press:
Rihabar Karim, a spokesman for Barham Salih’s coalition of democracy and justice, said on Saturday that his alliance supports Prime Minister Haider al-Abadi, while referring to “wishing” to find a joint mechanism of action with Pavel Talabani.

“The coalition of democracy and justice believes in joint action, and in this area we urge all good people in Iraq and in the region to unite in one front for the purpose of working to build a clear common vision for Iraq to emerge from the cycle of crises and wars,” Karim said.
And on the existence of consensuses and alliances with the Prime Minister Haider Abadi or Pavel Talabani, said that “so far has not been talking about specific people in this aspect, whether with Abadi or Pavel Talabani or others, but the front is open and can clarify the visions after the elections.”
He pointed out that “we put forward the idea of ​​working with Prime Minister Haider Abadi out of the crisis, especially after the idea of ​​fighting corruption, and therefore support Abadi.”
“We share the common points that serve the interests of the people in general and whoever we are, we have no reservations about them, if we consider ourselves to be on the reform front,” he said. Provided that it is with the reform of the country in a real and effective. “

(Baghdad: Al-Furat News) It is hoped that the visit of Prime Minister Haider Abadi, Najaf province, tomorrow to attend the Carnival of Victory Grand.
A source familiar with the correspondent of the agency {Euphrates News} today that “Abadi will attend on Sunday the Carnival of Victory Grand, which is held on the Palace of Culture in Najaf.”
The source pointed out that “it is expected that Abadi visit the leader of the Sadrist movement, Moqtada al-Sadr.”
http://alforatnews.com/modules/news/article.php?storyid=157304

The Kurdish delegation to spend Tuz Khurmato, who visited the federal capital Baghdad and the city of Najaf on Saturday, said the results of his visit were “positive”.

The head of the delegation, Mullah Hawar Daoudi, said in a statement to journalists today that we met with the President of the National Alliance Ammar al-Hakim, the leader of the “Asaib Ahl al-Haq” movement Qais al-Khazali, the representative of the authority Ayat Ali al-Sistani, the Secretary-General of the Organization Badr Hadi al-Amiri, Vice President of the Republic of the leader of a coalition of state law Nuri al-Maliki, President Fuad Masum, and Vice-Speaker of the Iraqi Council of Representatives Aram Sheikh Mohammed.

He added that this visit will be useful not to say in the coming days, but in the near future, saying that these figures pledged to do serious work to return displaced Kurds to justice and compensation for those affected by the events of 16 October last year, and the recruitment of national professional forces to Tuz, and the popular crowd output.

Daoudi promised that the visit was “positive”, pointing out that the violations were distorted by the Turkmen, who have been promoting for the past 14 years to the ugly issues of Kurds in the judiciary, and we have shown to those characters that these violations committed by Dhaq and Al Qaeda and the other terrorist organizations and that the Kurds do not have Hand out.

Prime Minister and Commander in Chief of the Armed Forces Dr. Haider Abadi meets the sons of martyrs of the Iraqi army heroes. This came during a ceremony held at the headquarters of the Ministry of Defense on the occasion of the 97th anniversary of the establishment of the Iraqi army. 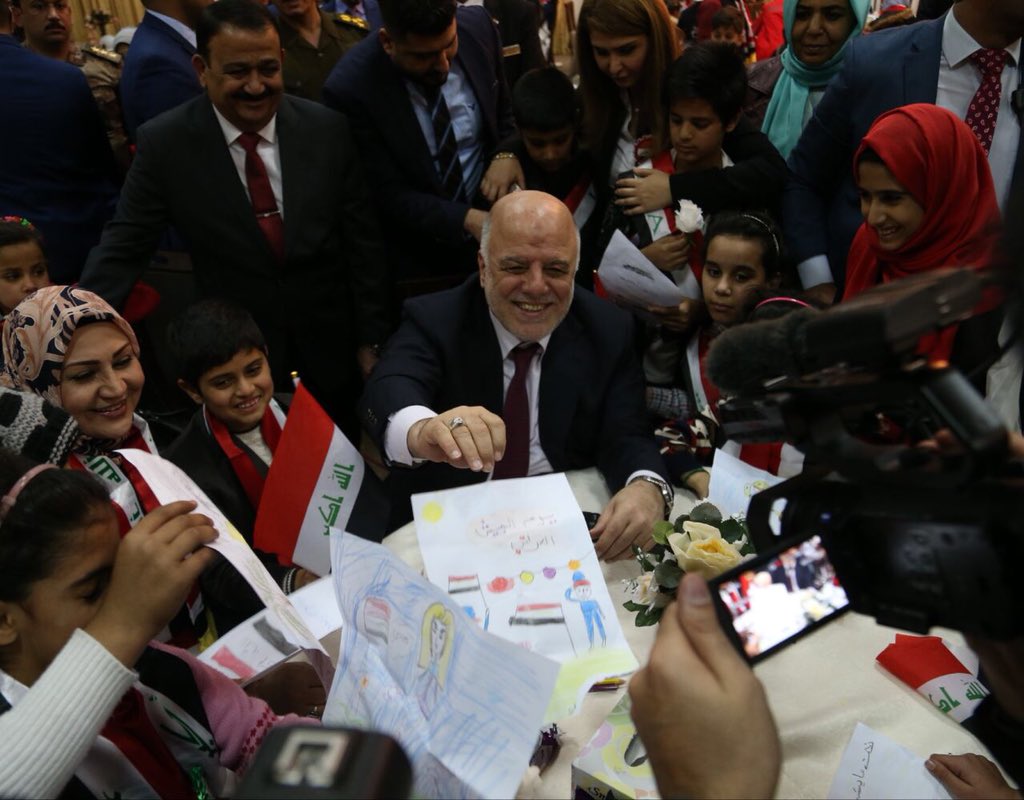 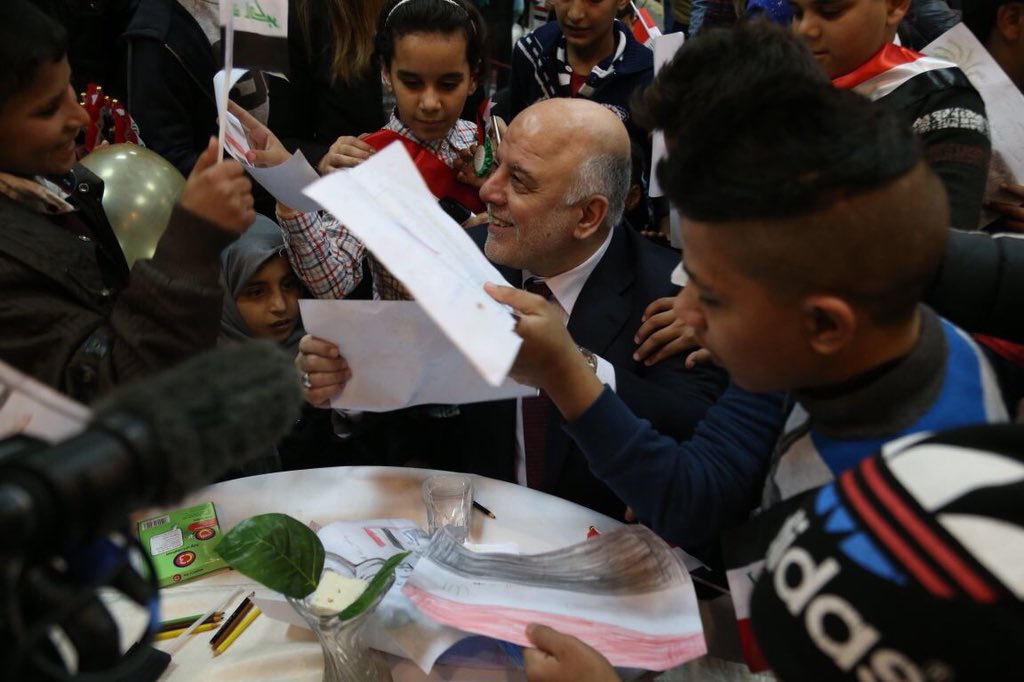 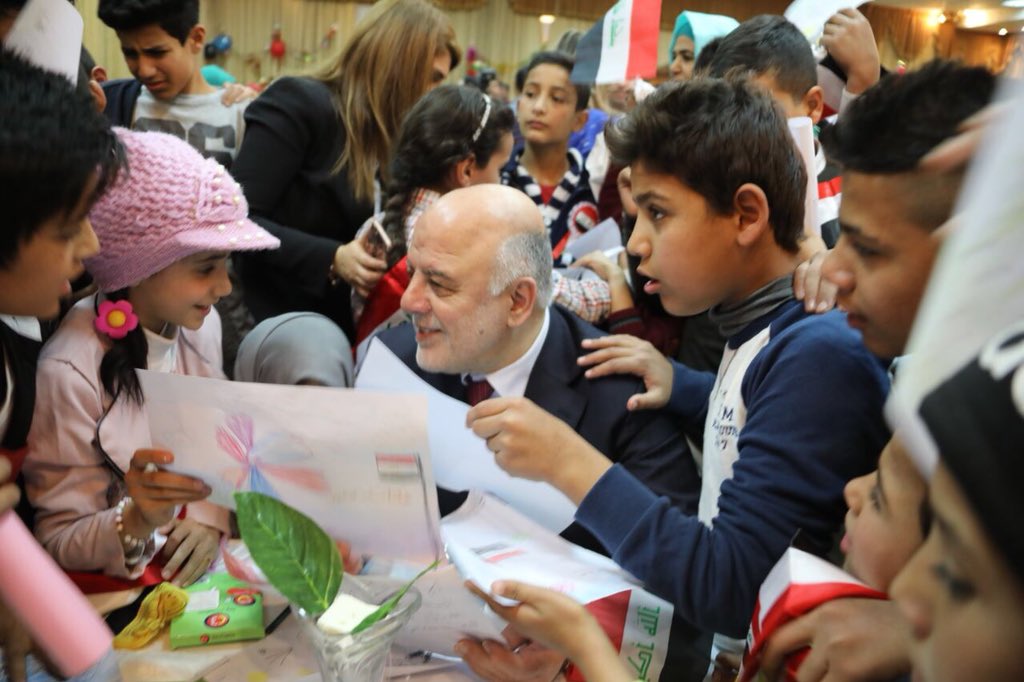 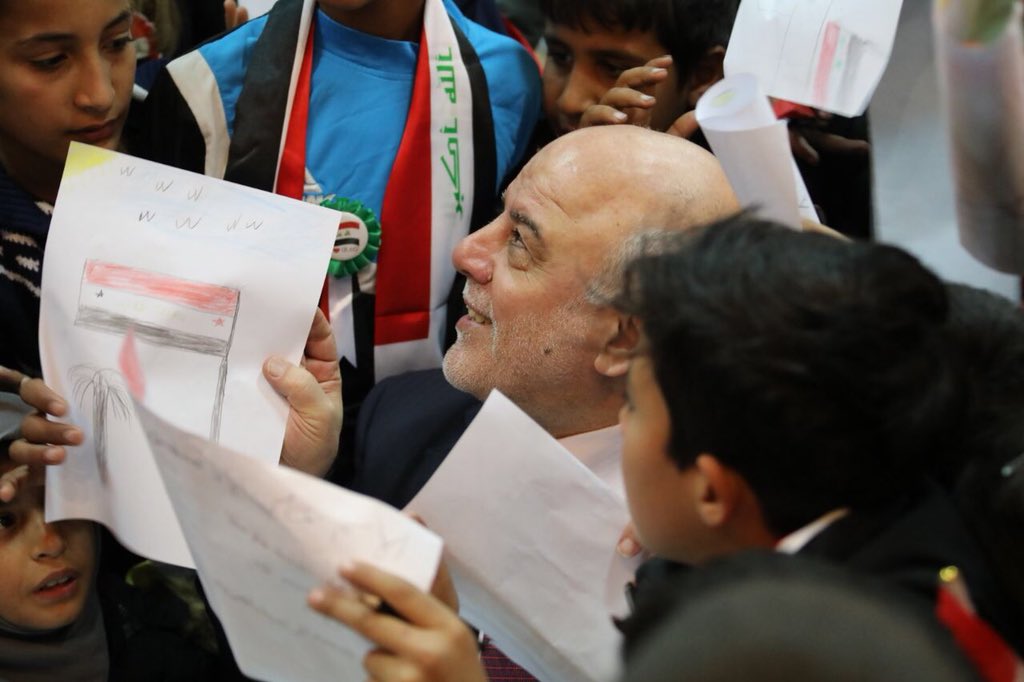 Baghdad / .. Detecting the leadership of the coalition of state law Abbas al-Bayati, Saturday, on the way to solve the outstanding problems between the federal government and the Kurdistan Regional Government.

“The federal government is ready to dialogue with the regional government in accordance with the conditions of Baghdad, which are all constitutional and legal and must be applied,” said al-Bayati, who is close to the prime minister for the “Eye of Iraq News”, that “the outstanding problems between Baghdad and Erbil can only be resolved through dialogue.” “He said.

On Wednesday, January 3, 2018, a Kurdish delegation arrived in Baghdad for talks with government officials and met with a number of officials, headed by Prime Minister Haider al-Abadi. Finished

[Ayna-Baghdad]
Prime Minister Haidar al-Abadi on Friday in his office in Baghdad with the Chairman and members of the Electoral Commission for elections to conduct the next electoral process.
The director of media of the Electoral Commission Aziz al-Kikani said in a statement received by the agency of all Iraq [where] a copy of him that Abadi “confirmed during the meeting on his support for the elections on schedule on 12 May this year with the provision of all the necessary inputs that contribute to the elections As planned. ”
He added that Abadi also stressed “the need to move forward in the schedule prepared by the Commission to complete its operational and logistical procedures, pointing out that the Council of Ministers will provide all the requirements of the electoral process with regard to the funds necessary to conduct.”
http://www.alliraqnews.com/modules/news/article.php?storyid=69976

The Kurdish delegation opposed to the Government of the Territory represented by the Movement of Change and the Islamic Group, and the Alliance for Democracy and Justice on the results of his visit to the capital Baghdad.

The delegation of parties announced in a joint statement today on the end of his visit to Baghdad, and meet with the three presidencies and other parties and political forces.

The statement said that the delegation stressed in all meetings on the need to pay salaries of employees, financial benefits to farmers, entitlements and rights of the Peshmerga forces, and end the hostile positions to spend the Tuz Khurmato and Kirkuk, and the area of ​​”Sarkan” and disputed areas.

The statement added that senior Iraqi officials and political leaders expressed their support for the joint delegation’s demands.

According to the statement, the Iraqi Prime Minister Haider Abadi stressed his commitment to pay salaries of employees in Kurdistan, and financial dues for farmers, and pledged to implement the steps that concern this area after checking the regulations of those who receive salaries, pointing to talk with Abadi also on ending the situation in the disputed areas on her.

The statement noted that the President of the Republic, his deputy, the President of the Iraqi Council of Representatives, and political leaders pledged to cooperate in following up the implementation of these pledges and put forward a road map for that, stressing the continuation of dialogue between the Kurdistan Region and Baghdad.