(Baghdad: Al-Furat News) Prime Minister Haider al-Abadi said the move to build a strong national army to defend the land and all its citizens without exception and preserve the sovereignty and prestige of the state.

“We recall with pride and honor the 79th anniversary of the founding of our vast Iraqi army, which, in all its formations and ranks, marked the most heroic national epic of the country and its people,” he said in a statement to his office.

“Today, we celebrate together the blessed and eternal celebration of the Army Day and the Victory Day. We extend our deepest congratulations and congratulations to our Iraqi people and their heroic army, which restored the country’s prestige and preserved the land of its country and made precious sacrifices in the most difficult stage of our beloved country. And preserve the prestige and sovereignty of the State. ”

Abadi continued, “This occasion coincides with the victory of the terrorist gangs and the security and stability witnessed by our country, thanks to the blood provided by this generous army and the rest of the formations. We take this opportunity to emphasize the continuation of building a strong national army defending its land and its citizens. All without exception and preserve the sovereignty and prestige of the state and carries the slogan of security and freedom belongs to a unified Iraq and does not represent a party or a sect or a specific entity.

“Our heroic army has proven that it is above all affiliations and names and fought a fierce war to save its people and citizens and liberate its land from terrorism.

Abadi concluded by saying, “I can not but thank our armed forces in all their formations and their generosity to what they have provided and presented to our people, our homeland, our country, Iraq, and each year and our brave Iraqi army with a thousand good.”

Prime Minister and Commander-in-Chief of the Armed Forces Dr. Haidar Al-Abadi congratulates the Iraqi Army on the 97th anniversary of its establishment. 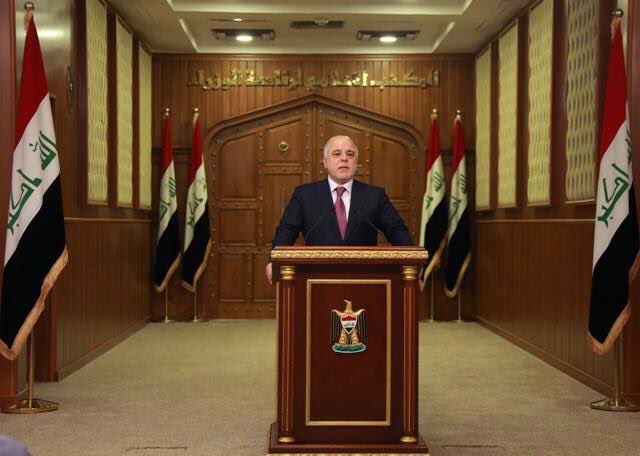 [Ayna-Baghdad]
President Fuad Masoum on Friday addressed the Iraqi people, officers and soldiers of the National Army and our armed forces on the occasion of the 97th anniversary of the founding of the Iraqi army.
“On this sixth day of January, we celebrate with pride and honor the 97th anniversary of the establishment of our glorious Iraqi army, which along with all of our heroic armed forces formed one of the greatest national achievements in the modern history of our country and our people by achieving a decisive victory over the terrorist In an eternal heroic epic that raised the appreciation, admiration and solidarity of all the peoples of the world. ”
“It is rare for a modern army to regain its self-confidence with such force, speed and efficiency as our Iraqi army and all our armed forces did, as demonstrated by the firm and decisive response against the terrorists and the remnants of the former regime.”
“In mid-2014, many people at home and abroad thought that our army would no longer be that wall that protects the homeland and citizens against dangers, especially the threat of terrorists, calling for the arrival of people from all parts of the world, but this is our army and has refuted that illusion by purging every inch of Iraq, through a series of exciting victories, has restored to him, through the high professionalism and the high morale that he has shown, not only his self-confidence but also the confidence of his people and the whole world as a guarantee to protect the unity and sovereignty of Iraq and the dignity of all Iraqis. ”
He added: “Without a doubt, these victories would not have been achieved without the encirclement of our people in all its components and spectra around our armed forces in all their formations of the National Army, Air Force, Anti-Terrorist, Air Force, Federal Police, Popular Mobilization, Peshmerga forces, security services and all the supporting formations of engineering, medical, Logistics and volunteers from the tribes and civilians in liberated areas, and all the citizens who contributed in any way to achieve this eternal victory. ”
“The passing of this auspicious occasion now calls upon us to stress the importance of the cohesion between our armed forces and the citizens who have been a solid supporter of their armed forces in the defense of Iraq and its security and freedom. We also reaffirm the need to complete the construction and development of our armed forces, This difficult stage depends on them as the shield shielded to protect the homeland and the gains of the democratic experiment. ”
The president stressed the importance of moving ahead with the plans to build a strong Iraqi army with a military doctrine whose aim is to serve the people and the public interest, protect sovereignty and support reconstruction, a national and professional defense army that belongs to the whole of Iraq and has no place for narrow loyalties and is capable of protecting citizens without any discrimination. Which also requires the limitation of weapons by the state and deter any excesses on the authority of the state and the law. ”
On this national occasion, Masoum expressed his warmest congratulations to all Iraqis, especially to the heroes of the army and the armed forces, and to the support of the international community and its support for our army and armed forces and for the martyrs of our righteous people who sacrificed lives for the freedom of their country and the liberation of their people and humanity from the scourge of terrorism. Heroes, and every year, Iraq and its army and armed forces with pride and prestige and power. ”
On January 6, Iraq celebrates the anniversary of the establishment of the army in 1921.
https://translate.googleusercontent.com/translate_c?depth=1&hl=en&rurl=translate.google.com&sl=ar&sp=nmt4&tl=en&u=http://www.mawazin.net/%25D9%2587%25D8%25B0%25D8%25A7-%25D9%2585%25D8%25A7-%25D9%2582%25D8%25A7%25D9%2584%25D9%2587-%25D9%2585%25D8%25B9%25D8%25B5%25D9%2588%25D9%2585-%25D8%25A8%25D9%2585%25D9%2586%25D8%25A7%25D8%25B3%25D8%25A8%25D8%25A9-%25D8%25B0%25D9%2583%25D8%25B1%25D9%2589-%25D8%25AA%25D8%25A3%25D8%25B3%25D9%258A%25D8%25B3-%25D8%25A7%25D9%2584%25D8%25AC%25D9%258A%25D8%25B4-%25D8%25A7%25D9%2584-97&usg=ALkJrhg3M2M_a7Qh8OhuGQ2tScQurfIbXg

The Ministry of Defense announced on Friday that the 9th Armored Division was briefed on the first day of the large-scale security operation launched in Hawija .

The ministry said in a statement received by “Iraq News”, that “the Ninth Armored Division was able within the axis of the Armored Brigade 34 and Brigade 3 popular mobilization of the inspection of the villages (hawaiyat, pink, tree, Gharib Lower, Central Ghraib, knife and total tattoos) Armored brigade 35 and the 11th Brigade, a popular crowd that was able to search the villages of Sabti Hamid, Hassan Subaih, Ali Sultan, Asakra, Hamda, Salman, Saleh Shalgam, Al-Asfar .

He pointed out that “the villages of (Rifaiat, Awash, Scorpio, Sayed Hassoun, Saadah) were inspected within the axis of the 37th Infantry Brigade and the 10th Brigade,” confirming that “operations are still ongoing .”

It is noteworthy that the Joint Operations Command announced last Thursday, the launch of large-scale operations in areas west of Kirkuk and the south to clear the elements of the “Daash.” Finished 2

News / Speaker of the House of Representatives Salim al-Jubouri, the city of Mosul, visited it and said it was for the purpose of limiting the amount of damage.
He met with Jubouri on his visit to the headquarters of the operations of Nineveh security and military leaders, as they discussed the security situation in Mosul efforts to pursue fugitives from the preacher of the terrorist and ways to achieve permanent stability in the province, according to a statement of his office.
Jabouri then toured the old city, but an engineering team was accompanying him to work out the damage in order to set specific timelines for reconstruction and restore all Mosul bridges to service.
“The state is concerned with compensation and reconstruction of the province, and the message of the state is to stand with you to achieve this goal,” he said.
He also stressed the necessity of presenting the Mosul airport for reconstruction at the conference of donor countries.