Prime Minister Haidar al-Abadi, the third session of the Supreme Council for Population in the presence of a number of ministers concerned.

“We are in a new stage after the completion of a military call, and we have to give hope to the citizen by advancing the work and giving the priorities that he needs, and not only by numerical statistics, but by working on sustainable and human development and creating a good environment for the citizen,” Abadi said in a statement issued by his media office. “He said.

Abadi said, “the priority of the government in the return of displaced persons and advised them to return to their homes and cities better than to stay in the camps.”

Abadi “listened to the comments of the ministers and briefed on the national document on population policies prepared by the Supervisory Committee to draw a promising population policy in Iraq over the coming years.”

The United Nations said at a conference on national reconciliation in Najaf on Wednesday that Iraq’s victory over the terrorists is an opportunity for the country to get rid of the painful past and move confidently on the road to peace and development. It urged all Iraqis to seize the momentum and build it to ensure a prosperous future for future generations.

The call came during a dialogue session that brought together tribal, religious, academic, political and active parties in civil society from the provinces of Najaf and Diwaniyah to learn about the views of Iraqis from all over the country  and to address the challenges  facing Iraqi national reconciliation in a post-urgent period.

This is the sixth and final dialogue session of a series of similar meetings held in different regions of Iraq entitled “National reconciliation: prospects and challenges” since September. The recommendations of these meetings will strengthen the process that will lead to a comprehensive national settlement that moves Iraq into the future after years of conflict and divisions. The meetings were jointly organized by the United Nations Assistance Mission for Iraq (UNAMI) and the Follow-up and Implementation of National Reconciliation Committee of the Prime Minister’s Office and financed by the Governments of Germany and the Netherlands.

“There is no alternative to compromise or reconciliation, it is a necessity, there is no choice but to instability, insecurity and development,” he said.

The discussion of a national settlement must involve all components and categories and be open to ideas and proposals, provided that they were all in conformity with the Constitution.

In her speech to the participants, 68 men and 28 women from the provinces of Najaf and Diwaniyah, Deputy Special Representative of the Secretary-General for Iraq for Political and Electoral Affairs Ms. Alice Wolbol pointed to the importance of Najaf in reconciliation, describing this city as known in a spirit of tolerance  and acceptance of the other.

Ms. Welbol said a daunting defeat offered the opportunity to move the path towards lasting peace so that the country could concentrate all its energies and resources on reconstruction.

“Reconciliation is a long process, and we must work together to develop a clear vision for a better future for Iraq,” the Deputy Special Representative stressed. “We believe that all Iraqis need to take advantage of this momentum and build a foundation for peaceful coexistence,” she said.

Participants highlighted post-conflict challenges in terms of national reconciliation. Opinions ranged from the diagnosis of the ills in the country, ways to proceed with them, calls to fight corruption, ensure justice, hold perpetrators accountable, enact political reforms and work for economic development.

They called for strong United Nations involvement in political and development areas, including elections and education, as well as capacity-building, noting the experience of the United Nations in other countries and  how to apply  it in Iraq.

Ms. Wolbol stressed that the United Nations is committed to helping the Iraqi government and people overcome many challenges.

I am confident that Iraq, through the concerted efforts of its leaders, its political forces and its people, with all its ethnic and religious components and patriotism, and with the continued support of the international community, will be able to overcome the challenges of the post-conflict phase, “said the Deputy Special Representative. Urging and building a better future. ”

BAGHDAD (Reuters) – The US embassy in Baghdad announced on Wednesday that Iraq would receive more than $ 70 million a year from flying fees in its airspace, pointing out that the success of Iraqi security forces in a crushing defeat would open the door to greater economic resources for the country.

According to an embassy statement, the agency {Euphrates News} received a copy of it today that ” the ” success of the security forces in the expulsion of elements Daesh outside Iraqi territory not only means to achieve greater security for the Iraqi people, but it also opens the door to greater economic resources of the country. ”

He added that” the Commission “The Federal Aviation Administration has decided that the threat to civil aviation is low enough for US airlines and postal codes companies to resume flying over Iraq for the first time since August 2014.”

He noted that “the Iraqi government will receive more than 70 million Of the annual revenue from the fees And increase these funds from the income of the Iraqi Civil Aviation Authority and its ability to improve the air navigation system of the country, “pointing out that” these payments were going to the past to other countries. ”

The Ministry of Transport announced this month the re-management of aviation American companies and companies with them flying US civil aircraft over Iraqi airspace after the announcement of the final victory on the terrorist’s calling.

The President of the Republic Fouad Masoum met with his deputies Nuri al-Maliki and Iyad Allawi and discussed the meeting of political and security developments in the country as well as the file of the upcoming elections and the budget next year and the situation in Kirkuk and Tuz Khrmatu.
According to a statement to the Presidency of the Republic, the meeting stressed that the need to make every effort to resolve all current problems between the federal government and the Kurdistan Regional Government.
The meeting also discussed the issue of displaced people and means of providing services to them and work to bring them back to their liberated areas as well as plans for the reconstruction of those areas.
The meeting issued the following decisions:
1. The call for the immediate start of a dialogue between the Federal Government and the Kurdistan Regional Government to be sponsored by the Presidency of the Republic and the technical support of the United Nations aims to bring about normal relations between the two sides on the basis of the Constitution and the decisions of the Federal Court.
2. The call for a meeting of the three presidencies and leaders and representatives of the political blocs and the judiciary as soon as possible to discuss the issuance of electoral laws and conduct elections for the Council of Representatives and provincial council elections in the constitutional date.
3. To call on all components of Kirkuk to the urgent meeting to discuss ways of normalizing the conditions of the province in a way that guarantees the rights of all citizens and the supreme national interest. 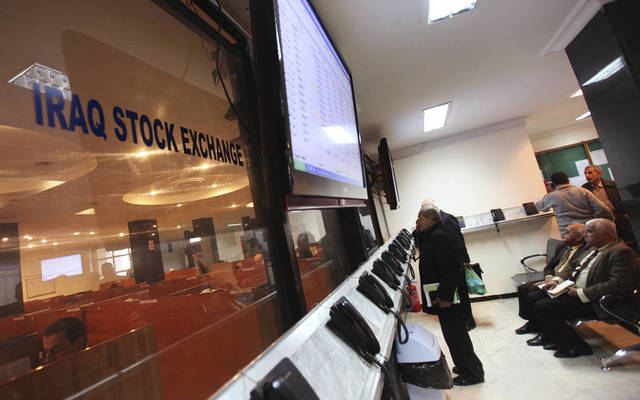 Mubasher : The index of the Iraqi Stock Exchange rose for the fourth session in a row, ending Wednesday’s trading up 0.09%, closing at 567.2 points, winning 0.5 points, compared to the closing level on Tuesday.

The rise in the index was supported by the rise of the shares of 6 companies, of which 9.86% were meat production and marketing, 4.55% for the manufacture and marketing of dates, 3.75% for ready-made garments, Baghdad for soft drinks 1.19%, and 1.04% for real estate.

Noor Bank of Iraq issued today volume and value, through 15 billion shares, which accounted for 49% of the volume of transactions, and accounted for 63.5% of the total liquidity of the stock market, worth 15 billion dinars .

The shares bought by foreign investors about 55.85 million shares, valued at 101.93 million dinars, through the implementation of 57 transactions on the shares of 6 companies.

While the number of shares sold by foreign investors 300 million shares, worth 105 million dinars, the implementation of 14 transactions on the shares of one company.

The World Gold Council announced on Wednesday the rise in the world’s gold reserves during the month of December, pointing out that Iraq has maintained the world’s 37th position of global reserves.
“The world’s reserves of gold rose for the month of December by 133 tons from last November to reach 33 thousand and 604 tons, while the United States ranked first in the world in terms of these reserves, which amounted to 8.133.5 , Followed by Germany with 3.373 tons.
“Iraq has maintained 37th place in the world in terms of these reserves out of the 100 countries listed in the international financial statistics of the world’s gold reserves, while Iraq also maintained the fifth rank in the Arab world, after it came after Saudi Arabia, Lebanon, Algeria and Libya.”
The Council noted that “Iraq’s gold reserves remained stable, recording 89.8 tons, representing 7.9% of the rest of the other currencies,” noting that “the last purchase of Iraq from gold was in April 2014, where he bought 15.16 tons.”
On January 23, 2014, the Central Bank decided to set up a series of pure gold bullion ranging between 50 g and 1000 g for sale to gold dealers, investors and segments of the society wishing to do so in Iraqi dinar.

The Kurdistan Regional Parliament announced on Wednesday the formation of a delegation to visit the Iraqi Council of Representatives.

“The meeting decided to form a delegation and send it to the Iraqi Council of Representatives to discuss a number of outstanding issues between Baghdad and Erbil,” the source told Mawazin News, “a bilateral meeting held today, between representatives of the Kurdistan government and his parliament.”

For his part, the Chairman of the Finance Committee in the Parliament of Kurdistan, Sherko Jawdat, in a press conference that followed the meeting, “We are currently seeking how to secure the salaries of employees and employees.”

“The delegation, which is to be formed will visit Baghdad soon and will enjoy with the Iraqi Council of Representatives, and discuss with the committees to prepare for the meeting between Erbil and Baghdad.