(NNA) / The Minister of Energy announced the signing of 18 memorandums of understanding between Iraq and Saudi Arabia on the economic side, stressing the participation of 22 Saudi companies in the Iraq oil and gas exhibition in Basra.

“We agreed to form a high-level committee with the Iraqi side to prepare a plan for commercial cooperation,” Khaled al-Faleh told a news conference with Iraqi Oil Minister Jabbar Luaibi and attended the meeting. “We urged Saudi companies to work in Iraq and in Basra Especially “, stressing the existence of” serious in economic and commercial cooperation with Iraq. “
“Cooperation with Iraq is a strategic direction with great interest and support from Saudi King Salman bin Abdul Aziz,” Faleh said.
He added, “There are practical steps during the past two months to achieve a strong start for cooperation between the two countries,” noting that “Saudi companies were urged to accelerate access to the Iraqi market and invest in it.”
And started in the province of Basra, on Monday, the activities of the International Oil and Gas Conference in its seventh edition in the presence of Saudi Energy Minister Khaled Al-Falih with the participation of dozens of companies, Iraqi, Arab and foreign

US President Donald Trump and French President Emmanuel Macaron stressed the need to resolve differences between Baghdad and the Kurdistan region through dialogue.

The White House said in a statement that US President Donald Trump spoke today in a telephone conversation with his French counterpart Emmanuel Macaron.

The two leaders agreed during the phone call that the Iraqi government and the KRG should resolve their differences through dialogue, the statement said.

During the conversation, the two sides emphasized the close relationship between the United States and France to maintain stability in the Middle East and North Africa.

A Kurdish deputy said on Monday that a US force had withdrawn in the city of Kirkuk over the past few days and was stationed at Key One base.

The deputy of the Kurdistan Alliance in the Iraqi parliament, Shakhwan al-Dalawi, said in a press statement that the bulk of the US force withdrew today from Kirkuk.

He said that according to the information obtained, the force emerged from Kirkuk, which is more than 40 wheel hummer US military, after having entered the city several days ago.

He said the Americans had not had any talks with Kurds about why they had come to Kirkuk.

The development comes after the spokesman of the International Alliance Ryan Dillon, the health of sending a military force to Kirkuk, attributed the reason to prevent complications in the city, he said.

[Ayn-Baghdad]
The Supreme Council for Combating Corruption held its regular meeting on Monday under the chairmanship of Prime Minister Haider al-Abadi and in the presence of all members of the Council.
Abadi stressed, according to a statement of his office received the agency of all of Iraq [where] a copy of it “to proceed with the approach adopted by the government in the fight against corruption and the prosecution of spoilers,” noting “the importance of resolving the files of corruption and the verification of the accuracy of information about them and to hold accountable corrupt people who cause theft of money Public or waste. ”
In view of the detailed presentation of the level of performance of the offices of the public inspectors, which was submitted independently by the Public Integrity Commission and the Financial Control Bureau, Abadi instructed that the offices of the public inspectors be given specific training courses to avoid the weaknesses revealed by the evaluation results. According to the statement.
During the meeting, the Supreme Council for Combating Corruption informed the offices of the inspectors, which resulted from exposing corruption or stopping the waste of public money, which represents more than ten times what the offices themselves spend within their financial budget.
The Council also commented on the achievements of the national team in the field to follow up the recommendations of international investigation experts, which revealed cases of corruption, embezzlement or forgery, and directed Abadi to continue to follow up these issues and support the work of the national team in the field to ensure a transparent administrative investigation.
He also directed the Supreme Council to combat corruption by resolving the files in his possession and lifting the obstacles and obstacles that prevent the resolution of many of the issues of the slow recovery of funds and the provision of corrupt to the judiciary.
http://www.alliraqnews.com/modules/news/article.php?storyid=68961 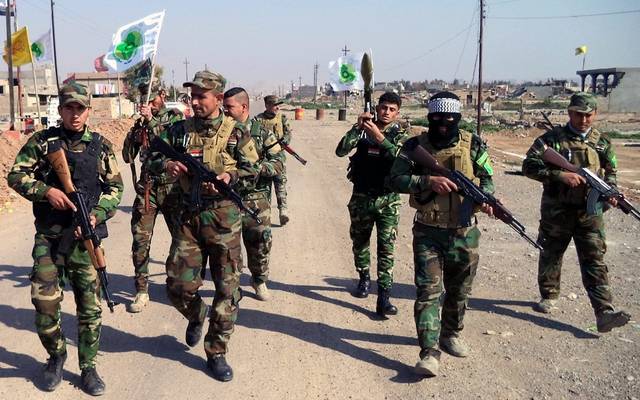 Mubasher : The Iraqi government authorized the finance minister to borrow 160 million dollars (194.82 billion dinars) from international banks to arm the Popular Struggle Authority and the anti-terrorism apparatus to ensure international export institutions, according to the Iraqi News Agency.

A source in the Finance Committee of the Iraqi parliament told the agency that the bill of the budget of 2018 authorizes the Minister of Finance the task, after the approval of the Iraqi ministers to borrow 906 million dollars from international banks.

The source pointed out that this amount is aimed at arming the Ministries of Defense $ 600 million, Interior $ 146 million, in addition to arming the popular mobilization forces worth $ 80 million, as well as the counter-terrorism.

It is worth mentioning that French President Emmanuel Macaron called during a meeting with the Prime Minister of the Kurdistan region of Iraq, Nechirvan Barzani, in Paris last week, to resolve all armed groups, including the Popular Forces.

Barzani and Kubic: Elections and political conflicts prevent the start of dialogue between Baghdad and Erbil
04-12-2017 06:43 PMThe Euphrates –

The adviser to the Security Council of the Kurdistan region pleased Barzani, on Monday, that the atmosphere of elections and political conflicts prevent the start of dialogue between Baghdad and Erbil to resolve differences between the two sides.

“The Barzani met with the Special Representative of the Secretary-General of the United Nations in Baghdad, Jan Kubic in Erbil, and during the meeting discussed the situation between Erbil and Baghdad.

Kubic stressed the United Nations position, saying that it wanted as soon as possible to start dialogue between the two sides, pointing out that the constitution should be the basis for solving the problems and not resort in any way to force and violence. Adding that the United Nations and the UN Security Council will continue to make efforts to accelerate the differences between the two sides peacefully. “

For his part, said Barzani, that the Kurdistan has vacated its responsibility and provided them to start the dialogue, but Baghdad Kamr necessary did not step towards that, noting that the atmosphere of elections and political conflicts in Baghdad is a major impediment to progress towards this file, but not citizens in Kurdistan, Conditions, and the negotiations should be accelerated to a timetable.

He added that Baghdad often claims to apply the constitution, and the Kurdistan region wants to apply it, but the Constitution as a whole and not what Baghdad is picking him.

(GCC) foreign ministers ended their meeting in Kuwait on Monday (December 4th, 2017), the first since the Qatari crisis erupted in June.

The ministers left the meeting room, refusing to talk about what was going on, while Kuwait’s Foreign Minister Sabah Al-Khaled Al-Sabah promised a press conference without specifying its date.

The meeting was aimed at preparing for the GCC summit, which begins on Tuesday 5 December 2017, and will last two days, the first since the outbreak of the Qatar crisis with Saudi Arabia, the UAE, Bahrain and Egypt.

Kuwait has been mediating between the Gulf parties since the crisis broke out on June 5. The Emir of Kuwait, Sheikh Sabah Al-Ahmad Al-Jaber Al-Sabah, a number of trips to resolve the crisis without the result of these moves a breakthrough between the opponents.

According to an informal schedule of meetings, the leaders are due to arrive on Tuesday afternoon, with the summit opening at 5:30 pm Kuwait time.