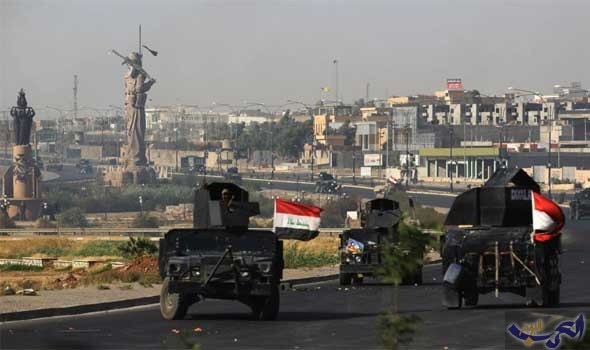 The Iraqi leadership in the mobilization of Anbar province Awad al-Osman, Friday, November 10, the start of artillery and air raids on the district of “Raw” west of Anbar in preparation for liberation, pointing out that “artillery bombardment and air force targeted the supply lines of the” Daash “and places of their presence in the district “Rawa” west of Anbar province, in preparation for a large-scale ground offensive to restore this area, which has been under the control of the organization for more than 3 years.

He added that the bombing focused on specific targets within the center of the city and at the entrances, in a move aimed at destroying the arsenal of the organization before the storming, pointing out that the bombing came in conjunction with securing the bridge to the Romaneh, in preparation for crossing the military sectors towards the judiciary, , The dismantling of 25 houses booby-trapped and six explosive belts west of the city of Al-Qaim, said the site of the crowd, “the detachments engineering popular crowd was able to dismantle 25 houses booby-trapped and six explosive belts on the Iraqi-Syrian border west of the base,” noting that “the detachments were able to dismantle 14 packages An improvised explosive device and the type were m Splendor on both sides of the road leading to the Iraqi-Syrian border west of Anbar. “

On 6 November, Prime Minister Haider al-Abadi directed officials in Al-Qaim, Haditha and other liberated areas west of Anbar to exert maximum efforts to clean up residential neighborhoods, roads, institutions and circles of explosives left behind by the Da’ash organization. A warning to the Shiite pilgrims residing in its territory, who entered to commemorate the ceremony of the visit of Imam Hussein in the city of Karbala to offend other countries.

The Interior Ministry said in a statement today that it “warns all residents of Iraqi territory from carrying out political activities that harm the external relations.” The statement warned that “the ministry will take all legal proceedings against violators up to the extent of deportation.”

Ali al-Bayati, a member of the High Commission for Human Rights in Iraq, Friday, 10 November, kidnapped employees of an oil facility in the north of the country by unknown gunmen. He explained that four employees of the district of Tuz Khurmato, North of Baghdad, working at the station, “Jnbur southern” oil Kirkuk province, were kidnapped upon their return from their work this morning by an armed group took them to an unknown destination, revealing the names of the kidnapped employees are “Mustafa Fadel Brur, Ayoub Mohammed Rashid, Saleh, Taha Habib Ahmed “, Two of them from the Turkmen component, and the other two from the Arab component.

Al-Bayati called on the local government in Kirkuk and the security services in the province to take urgent action to reveal the fate of the abducted and abducted employees in the province in the morning. He called for a quick investigation into the matter, the circumstances of the incident and the intensification of measures taken to protect civilian lives in the province. From the provinces of Kirkuk and Salah al-Din, a face to receive complaints from the families of abductees and fact-finding to know the details of the incident. It is noteworthy that the province of Kirkuk, and the district of Tuz Khurmato, from the disputed areas between the Iraqi government and the Kurdistan region, in accordance with Article 140 of the Constitution And recently witnessed a security change represented by the control of the federal forces on them after the removal and withdrawal of the Peshmerga of the region, of them.

Iraq News Now
19:53
Last updated
The time now is 08:02 PM
Al-Quds Press / Salah Baban:
– The Peshmerga forces will return to the disputed areas, said the official of the Protection and Information Agency in the Kurdistan region Lahore Talabani said Friday that the current military negotiations are not for the return of the Peshmerga to these areas but for the 36 wells controlled by the ” Referring to the family of Massoud Barzani, former president of the Kurdistan region.

“We are reassuring our people and all the citizens of the disputed areas that the Peshmerga forces will return to the areas where they were,” Talabani said in a speech at the ceremony of the late Ramadan Jalal Talabani and attended by Al-Ghad Press. “What happened in these areas is a political setback for the Kurdish political leadership “He said.
He pointed out that “the military meetings in this period are only for the 36 oil wells located in the disputed areas, which are not subject to the Ministry of Natural Resources, so that the imports go to one of the families,” in reference to Barzani family, which has influence on Erbil and Dahuk and the Nineveh Plain.