Tents for war escorts in Mosul

The World Bank on Tuesday approved $ 400 million in financial aid to help rebuild Iraq after the liberation of many cities from the control of the Da’ash organization.
The World Bank said in a statement that the aid package aims to “support the recovery, reconstruction and rehabilitation of priority infrastructure facilities in order to restore the provision of public services in newly liberated Iraqi areas from the grip of a sympathetic organization.”
The aid is additional funding for the $ 350 million emergency development project in Iraq, approved in July 2015 and being implemented in seven cities in Diyala and Salahaddin provinces, the statement added.
The additional funding is expected to expand the geographical scope of the current project activities to include other cities liberated from the control of Daed in the provinces of Salah al-Din and Diyala, in addition to areas in Anbar, Kirkuk, Nineveh and Dahuk of the Kurdistan Regional Government, according to the statement.
“The international community has expressed its commitment to supporting the urgent efforts of the Iraqi government to rebuild Mosul and other recently liberated cities,” said Saroj Kumar Jha, regional director of the Mashreq Department of the World Bank.
“The World Bank is committed to working with the Iraqi authorities to achieve this much-needed, sustainable, inclusive and equitable reconstruction to promote long-term development and equal opportunity for all,” he said.
Five sectors
The activities of the current project cover five main sectors: water, sanitation, electricity, health, transport and municipal services, and additional funding will continue to meet the urgent needs of communities in the liberated areas of education, agriculture and urban services.
The project also supports the preservation and restoration of important cultural heritage, particularly in the old city of Mosul, as well as improving the quality of education for boys and girls, increasing employment opportunities for women and youth, as well as the poor in both urban and rural areas.
The additional funding is also aimed at supporting the Iraqi government in attracting the private sector to participate in reconstruction efforts.
Ibrahim Dajani, director of the Mashreq Sustainable Development and Infrastructure Program at the World Bank and coordinator of the Iraq Reconstruction Program, said the EMP project had restored 2 million people access to drinking water, sanitation and electricity, and re-linked 2.5 million people Through the reconstruction of transport infrastructure.
The World Bank statement said that the Emergency Development Process project provided opportunities for cooperation with reconstruction stakeholders such as United Nations agencies and several governments that had pledged financial contributions, including Germany and Kuwait, and the Japan International Cooperation Agency.
Source: World Bank

[Ayn-Baghdad] The
documents of draft draft law of the state budget for the year 2018, on Tuesday, the total value and deficit, in addition to reducing the proportion of the Kurdistan region.
According to the documents, the total revenue was estimated at 5 trillions and 331 million dinars at 43.4 dollars per barrel of oil, with a production capacity of 3 million and 888 thousand barrels, including about 73 trillion dinars of oil revenues.
She added that the total expenditure estimated at 108 trillion and 113 million and 913 thousand and 506 dinars, while the budget deficit amounted to 22 trillion and 782 million and 913 thousand and 506 dinars, while the share of the Kurdistan region to 12.67% only after it was 17%.
The draft budget law is based on the rate of export of oil of 3 million and 800 thousand barrels per day, including 250 thousand barrels of oil in the Kurdistan region, and 300 thousand barrels of Kirkuk oil, where the budget was built on the basis of the price of a barrel estimated at about $ 43, As oil remains the largest supplier of the budget.
The documents pointed out that the share of the Kurdistan region was developed according to the souls of each province of the region, and when any increase or decrease in the total expenditures of the federal budget will add or decrease the share of the provinces of the region proportionate with the increase or decrease.
It is noteworthy that the reduction of the quota share of Kurdistan in the budget of 2018 is the first since 2003, where 17% of the political agreement, but after the imposition of federal authority recently in the province of Kirkuk and disputed areas.

Abadi: Our forces are moving properly in western Anbar, especially in Qaim and have made great achievements, and soon we will be bleeding human beings liberating all Iraqi lands.

The Council of Ministers held its regular session on Tuesday 31 October 2017 under the chairmanship of the Prime Minister Dr. Haider Abadi.
During the meeting, the vote on the allocation of a sum of 5 billion dinars from the emergency reserves of the Ministry of Municipalities in preparation for the rainy season, and vote on the allocations and payment of dues cleaning Basra province.

The vote on the project of smart industrial parties, voting on the establishment of an advanced rehabilitation center for the wounded and people with special needs, voting on the marketing of the crop and the amendment of paragraph 1 of item III of the Council of Ministers Resolution No. 409 of 2009 on the formation of a high committee to manage the policy of poverty alleviation.

The vote on the cancellation of the Council of Ministers Resolution No. 167 of 2011 on the suspension of payment of wages for watering agricultural land, in addition to the vote on a decision to limit the import of electrical appliances with high consumption of electric power, and vote on a decision in respect of revenue collection of electricity charges to bear the distribution of electric power 15 percent of the loan from the Japan Bank for International Cooperation through a loan from the Iraqi Bank for Trade in the payment of the fee of collection.

It also voted on the obligation of ministries and entities not affiliated with the Ministry that did not comply or with the same poor response to the implementation of the Council of Ministers Resolution 2016 paragraph 1 on the need to reduce the proportion of 50 percent of the current consumption of all facilities of electricity and the Ministry of Electricity report on the consumption of the above for taking procedures Necessary.

The Council voted to update the national housing policy in Iraq. The vote was also taken by the ministries and all government agencies to add the system of liquid gas to the vehicles belonging to it and working with gasoline in coordination with the Ministry of Oil in order to set a timetable for completion of this and give discounts for imported vehicles and 50% On the gas system in terms of reducing the rates of deduction of customs, which is 15 percent of the value of the imported vehicle as well as the tax rate, which represents 25 percent of the value of customs fees and taxis by adding liquid gas system and oblige the Ministry of Commerce not to import the garage Pat that does not work with liquid gas fuel.
Also voted on the abolition of the Supreme Committee to follow the bird flu and the Ministry of Agriculture and the provinces all the provisions of the Animal Health Law No. 32 of 2013 in all matters related to diseases and epidemics of animals, and each according to the competence determined by law.

The Council of Ministers approved the draft law of the Social Fund for Development, a fund with a moral personality linked to the Prime Minister and aims to contribute to the achievement of sustainable and comprehensive development in local communities and support them and enable them to improve the living situation and access to basic services will be funded by the government and receive grants and donations and others.

It was also voted on the date of the parliamentary elections on 15 May 2018 and the federal government provides a safe environment for the elections and the return of displaced persons to their regions and that the voting electronically and the parties that are running armed wings.

URGENT Cabinet votes on parliamentary elections on 15 May 2018

Here’s a map while I look at additional details in the mean time: 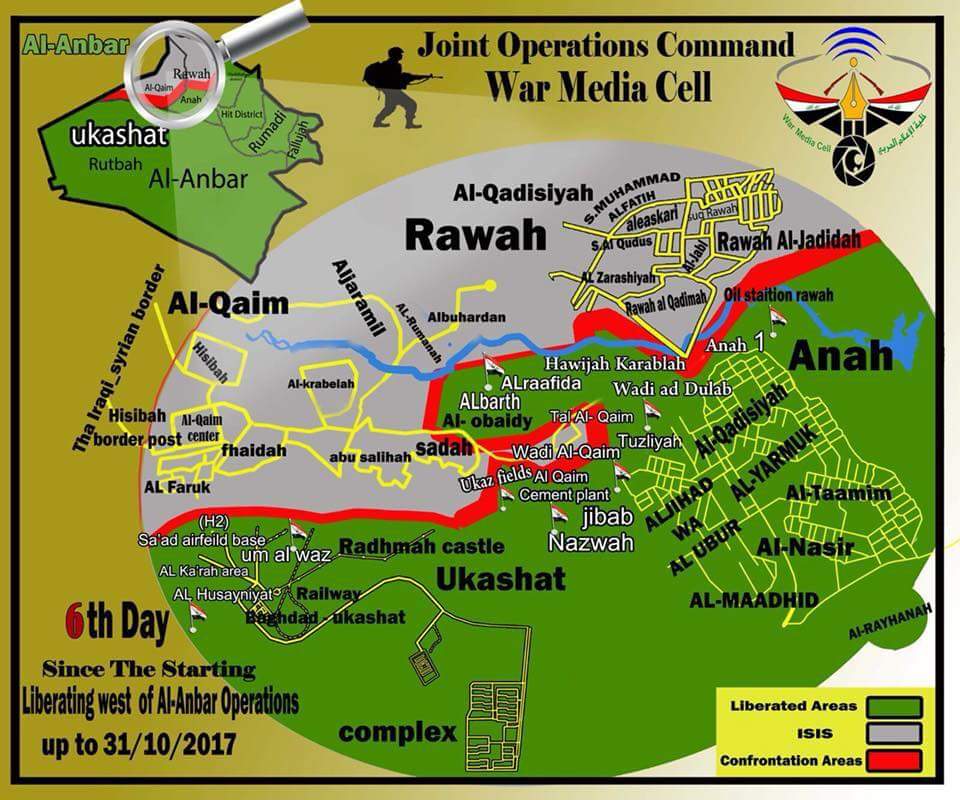 Shafaq News / Prime Minister Haider al-Abadi, said his government will pay the salaries of staff of the region soon.
“We will soon be able to pay the salaries of the Peshmerga and all the regional staff,” Abbadi said at his weekly conference after the cabinet meeting.
Abadi also stressed that the federal forces have spread in all disputed areas.
“Today, there are those who are trying to return the hate speech that led to the emergence of a preacher years ago,” he said.
“The media in the region has clearly incited the killing of the federal forces and this is a war crime, inciting Kurdish channels is unacceptable.”

Abadi: A few days and the bleeding of the human edited