Called the President of the Parliament of the Kurdistan region isolated Yusuf Mohammed, President of the Kurdistan region Massoud Barzani to step down from power, after the events of Kirkuk.
“We are all prisoners of a political elite working to control the country’s wealth in order to expand its authority,” Mohammed said. “This political elite is trading with the sacrifices and blood of the people.
Mohammed pointed out that “the Peshmerga tournaments painted a beautiful picture of resistance and sacrifice,” expressing regret for “the inability to make these sacrifices the basis of a legitimate, constitutional and civilized rule.”
“Barzani said,” You have to admit failure and let our people decide their own destiny and not be determined by you according to your wishes, “calling Barzani” to provide a great service to his people through his resignation from office. ”
It is noteworthy that the parliament of the Kurdistan region has been disabled for two years, while his boss Yusuf Mohammed, a movement of “Kuran” any “change” opposition, from the practice of his work in Erbil.
And 25 September Parliament held its first meeting after the long obstruction, headed by Deputy Speaker Jaafar Ibrahim Imanaki, to ratify the referendum on the separation of the territory from Iraq.
Source: Alsumaria News
Ali Jaafar 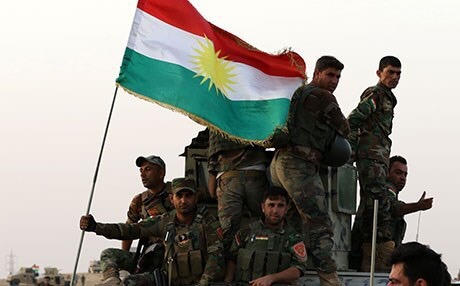 “Washington does not recognize the referendum in the Kurdistan region, and it supports the unity of Iraq and the steps of the federal government in avoiding confrontation and imposing the rule of law,” Tillerson said.

He added that “the United States of America to take over the war against the promotion and liberation of all Iraqi territory is very important and supports the efforts of the Iraqi government to eliminate terrorism, in addition to reconstruction of liberated areas and support the Iraqi economy.”

For his part, Abadi stressed that “what happened in Kirkuk represents a redeployment to impose order in the province, which are legal and constitutional steps in order to prevent the division of the country and weaken it.”

“The federal government was keen on dialogue in accordance with the constitution, but the officials in the region did not respond,” he said, noting that “the priority is still for the battle with gangs calling for terrorism, which we are approaching to resolve and liberate the entire Iraqi territory and secure the border.

Prime Minister Haidar al-Abadi received a telephone call from French President Emmanuel Macaron, in which he discussed the deployment of Iraqi forces in the province of Kirkuk.

A statement by the Office of Abadi said that the measures taken by the Iraqi federal government constitutional and legal is the imposition of federal authority in Kirkuk in order to protect citizens and peaceful coexistence among them.

While McCron reiterated his country’s support for the constitutional steps taken by the Iraqi government to preserve the unity of Iraq, pointing to the importance of continuing to focus on fighting gangs and calling for the elimination of terrorism.

A statement issued by the Ministry of Defense said that “Air Force planes, the Sukhoi Squadron, carried out from al-Assad air base, qualitative sorties in the cities of Rawah and Al-Qa’im. This resulted in the destruction of vital vital targets for Da’ash and his loss of life and equipment. And a different habit. ”

[Ayna – Baghdad]
Prime Minister Haider Abadi, the death of the referendum on the separation of Kurdistan from Iraq, which took place on 25 September last.
“I have informed the Kurdish leaders that the referendum will harm the interests of the citizens of the Kurds first,” Abadi said at a weekly press conference on Tuesday. “The referendum is now over and we are calling for dialogue under the constitution.”
“I will not enter into an internal war that I said earlier and repeat now,” he said, adding that “any attack on any citizen in Kirkuk is an attack on us.”
He pointed out that “the burning of the media is a malicious case,” noting that “the Iraqi flag for all Iraqis must be lifted all over Iraq.”
Abadi warned “any group in Kirkuk and the disputed areas to carry out any act of sabotage,” noting that “citizens contacted and demanded to rid them of dictatorship.”
He called on the Prime Minister “politicians of the region not to reduce the Peshmerga by dividing them into parties and groups,” pointing out that ”
“I am committed to what I announced earlier, the extension of federal authority throughout Iraq,” denying “absolutely any agreement to form three provinces in Kurdistan.”
“Soon we will announce the liberation of all Iraqi territory and the control of the border with Syria,” he said.
http://www.alliraqnews.com/modules/news/article.php?storyid=67200

Twilight News / US State Department announced on Tuesday that Washington is working to ease the conflict between Iraq and the authorities of the Kurdistan Region.
This comes after Iraqi President Fuad Masoum announced in a televised speech that the military operation that led to the restoration of Iraqi federal forces control of the province of Kirkuk and oil fields, was caused by the referendum on independence.
Iraqi Prime Minister Haider al-Abadi said on Tuesday that the referendum on the independence of the Kurdistan Region, which was conducted last month, “ended and became the past.”

The Syrian army, backed by the United States, has taken full control of the city of Raqqa, which was the most prominent bastion of gangs supporting the terrorist in Syria.
“The military operations in Raqqa have ended after four months of fighting,” said spokesman Talal Sallou.
But the spokesman for the US-led international coalition said he could “confirm the 90 percent clearance of the city.”
Terrorist gangs announced three years ago as capital of his alleged “succession”.
Observers believe that the fall of the city of Raqqa symbolizes the collapse of gangs and called the terrorist, which was planning to attack abroad from inside the city.
Terrorist gangs have suffered a series of field losses in neighboring Syria and Iraq, where they have been attacked by multiple forces on a variety of fronts, including Mosul in Iraq, and in Syria have retreated to a sector of the Euphrates Valley and surrounding desert areas.

The illegal referendum is over, its results invalid and belongs in the past. We call for dialogue based on Iraq’s national constitution

SULAIMANI – Iraqi President Fuad Masoum on Tuesday (October 17) blamed the Kurdish independence referendum for triggering a military intervention by Iraqi forces to take control of the province of Kirkuk and some disputed territories.

“Holding a referendum on the Kurdistan independence from Iraq stirred grave disagreements between the central government and the government of Kurdistan,” Masoum, himself a Kurd, said in a televised address.

That “led to federal security forces retaking direct control of Kirkuk,” he said.

Iraqi Kurds voted overwhelmingly on September 25 for independence from Baghdad in a referendum which saw over 90 percent vote ‘Yes’.

Regional president Masoud Barzani had pushed ahead with the poll in defiance of Baghdad, Washington and Iraq’s neighboring states.

Masoum, who belongs to the PUK, a rival Kurdish party long at odds with Barzani, said the central government had made “strenuous efforts to reach a solution”.

But, he said, a “grave crisis… broke out between the federal government and the government of Iraqi Kurdistan because the latter insisted on unilaterally holding the referendum”.

Masoud Barzani issued a statement on Tuesday (October 17) in the wake of rapid collapse of Kurdish forces in Kirkuk, saying the takeover of the city and other disputed territories by Iraqi forces was due to “unilateral decision” of a certain political party.

“What happened in the city of Kirkuk, was due to unilateral decision of certain officials within an internal political party in Kurdistan, which eventually led to withdrawal of Peshmerga,” Barzani said in a written statement.