“The leadership of the Kurdistan region bears the consequences of a dirty war in Kirkuk and northern Iraq on the grounds of the alleged establishment of the Kurdish state,” Sheikh Mohammad said.

“This dirty war, which was imposed because of the referendum and the lie of establishing the Kurdish state, came to the personal and partisan interests of a few people,” he said.

Joint Iraqi forces, supported by popular mobilization factions, moved to carry out redeployments in positions under their control prior to the June 9, 2017 events.

The Ministry of Commerce announced earlier on Wednesday (September 20, 2017) the participation of great powers and large companies in the Baghdad International Fair in its 44th session under the slogan (“We liberated our land and with your cooperation with us”) for the period from 21/10 to 30/10 /2017.and ended29/345

The governor of Kirkuk, an agency, Rakan Said al-Jubouri, on Monday, that the local police will take over exclusively the management of the security file in the province, while calling the families that left the province to return to their homes.

Jubouri said in a press conference attended by the reporter / Mawazin News / that “the police will take over exclusively the management of the security file in the province,” calling on citizens in Kirkuk to “not firing shots in the air.”

He stressed that “the services will all return to Kirkuk and tomorrow we will meet service circles,” he told the directors of the departments to “go to their departments tomorrow and provide services to citizens.”

“We arrived in Kirkuk at late hours, and there are interruptions in a certain current will be addressed tomorrow,” he said, stressing the importance of citizen cooperation in maintaining security.

Regarding the news that some media outlets reported on issuing an arrest warrant against the governor of Kirkuk, Najmuddin Karim, al-Jubouri said, “I have not heard of a warrant for the arrest of the former governor, and this is not my specialty,” stressing that “all that is happening is political differences, about her”.

The Cabinet decided today to assign the Deputy Governor of Kirkuk, Necmettin Karim, Rakan Said Al-Jubouri, to the governor’s functions temporarily until the selection of a new governor.

The International Development Bank (DFID) won the Excellence Award for Wise Management at a ceremony held in the Jordanian capital of Amman under the theme of Innovation and Excellence for Financial Institutions and Entrepreneurship 2017, which was awarded by Princess Taghreed Foundation for Development and Training and sponsored by the Union of Arab Banks based in Jordan.
The award was received by Ziad Khalaf, Chairman of the Board of Directors of the Bank. He was considered one of five distinguished personalities in the Arab region to receive the Excellence Award in the wise management in Iraq. The award was awarded as a result of the strategy adopted by the Bank’s management in practicing the latest banking technologies. The staff of the bank are employees to be competitors of international banks according to sound banking rules followed.
The Development Bank is the first bank to receive this award from among the banks operating in Iraq, and the Iraqi banking system consists of 62 banks, including 7 government banks, one of which is a newly established Islamic.

[Baghdad: Al Furat News]
The Alliance for Democracy and Justice, led by the former leader of the Patriotic Union of Kurdistan, Barham Saleh, called for the formation of a transitional government in the Kurdistan region, in order to conduct dialogue with the central government in Baghdad.
“Coalition for Democracy and Justice calls for the cessation of military operations in Kirkuk and the withdrawal of security forces to calm the situation,” coalition spokesman Ribwar Karim Mahmoud said in a statement published today.
He stressed that “the parties concerned with the crisis, especially the federal government, to prevent any violation against the rights of citizens in these areas,” noting that “the current situation in Kirkuk, is not borne by the Peshmerga forces, which defeated the reasons, but is the result of political risks and unrealistic steps that Did not take into account the interests of the people. ”
Mahmoud explained that “the current situation is also the product of the attempts of corrupt to cover the looting and looting in the name of Kirkuk and Kurdish nationalism, and we must support the Peshmerga forces, to support the will to defend the homeland and the people.”
He pointed out that the Alliance for Democracy and Justice calls for direct dialogue between the representatives of the people of Kurdistan and Baghdad, and it is necessary that the international coalition and neighboring countries to play their positive role to stop the chaos and bloodshed of the citizens of this country. ”
The statement stressed that” The formation of a transitional government in Kurdistan and its function of a constructive dialogue with Baghdad, until the holding of fair elections in the Kurdistan region. ”
http://www.alliraqnews.com/modules/news/article.php?storyid=67145

The Presidency of the Parliament of Kurdistan has announced on Sunday the holding of the third regular session on Wednesday.
It is noteworthy that the joint federal forces, started since last night, the process of restoring control of the disputed areas with the Kurdistan region, where the process began to enter Kirkuk and control of oil wells and important vital installations, as well as control of Jalawla and Qara Tuba and areas in the Nineveh Plain.
The operation witnessed a political escalation by the Kurdish leaders. The governor of Erbil and Kirkuk called on the citizens to take up arms and get to the street. Prime Minister Haider al-Abadi urged the citizens to cooperate with the security forces and continue their work in the official circles.
During the operation clashes between the federal forces and Peshmerga, killing and wounding more than 40 elements of the Peshmerga, in an initial outcome.
The leadership of the Peshmerga forces responded to the operation in a statement accusing the Patriotic Union of Kurdistan of “treachery” and described the federal forces as “under the command of the Iranian Revolutionary Guards.” She pointed out that the “Ebadi government” will pay the tax. 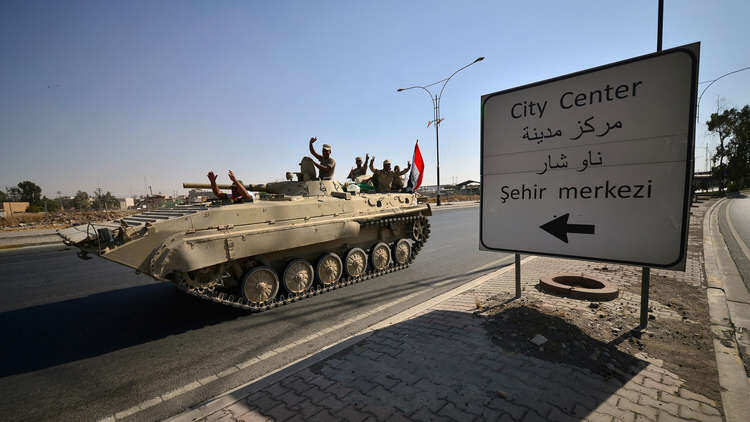 Iraqi forces managed to take control of most of Kirkuk within hours, from the south of the city to its center.

The forces involved in the operation included the Counter-Terrorism Bureau, the Rapid Response Squad, the Federal Police, the popular crowd and others.

These forces were able to restore the most important vital military, economic and administrative positions in the province of control of the Kurdish Peshmerga forces, including:

The Ministry of Justice announced the issuance of the new issue of the Iraqi newspaper No. 4464 on 9/10/2017, which included two parliamentary decisions as the referendum by the authority of the Kurdistan Region unconstitutional, and another provides for the removal of Kirkuk Governor Najmuddin Omar Karim from office .
The director general of the Iraqi facts department, Shatha Abdul Malik, said that the new issue of the Iraqi fact sheet included the law of ratification of the documents of the Bucharest conference for the year 2004 attached to the Universal Postal Convention No. (74) of 2017 and a number of other parliamentary resolutions.
The Director-General reviewed the decisions contained in the number of the parliamentary resolution on the removal of the Governor of Kirkuk Najmuddin Omar Karim from his position No. (52) for the year 2017 and the decision of the deputies as the city of Mosul in general and Tal Afar city of disaster No. (53) for the year 2017, The performance of the third round exam and granting the sixth preparatory period the opportunity to improve the rate No. (54) for the year 2017 in addition to a parliamentary decision to consider the referendum by the Kurdistan Regional Authority unconstitutional No. (55) for the year 2017.
The Director General said that the new issue also included a statement issued by the Ministry of Health No. (236) for the year 2017.

ERBIL — US Senator John McCain, Chairman of the Senate Armed Services Committee, released a statement today on reports of clashes between Iraqi forces and the Kurdish Peshmerga in Kirkuk, stating that he is deeply concerned about the military advances against the Kurdish positions near Kirkuk.

He called on Iraqi government to stop exacerbating the situation. “Iraqi forces must take immediate steps to de-escalate this volatile situation by ceasing their advances,” he noted.

The US Senator explained the US did not provide weapons to the Iraqi government to attack Kurds.

“The United States provided equipment and training to the Government of Iraq to fight ISIS and secure itself from external threats—not to attack elements of one of its own regional governments, which is a longstanding and valuable partner of the United States,” he stressed.

McCain warned against misuse of the US weapons, saying “Make no mistake, there will be severe consequences if we continue to see American equipment misused in this way.”

He called on the Iraqi Prime Minister Abadi and the Kurdistan Region to engage in a dialogue about the “Kurdish people’s desire for greater autonomy from Baghdad at an appropriate time and the need to halt hostilities immediately.”

The Iraqi government began negotiations with the leader of the Karamian axis and a member of the political bureau of the Patriotic Union of Kurdistan, Mahmoud Sinakawi, in order to hand over Khanaqin peacefully, according to Kurdish sources in the Khanaqin district of Diyala province.
According to Kurdish TV NRT based in Sulaymaniyah, “the leader of the Karamian axis, Mahmoud Sinakawi, the federal government is talking to hand over the Khanaqin district to the Iraqi authority.”
“Members of the provincial council support the peaceful entry of Iraqi forces into Khanaqin, our right to blood,” said Amal Omran, a member of the Diyala National Union.
The Peshmerga forces today evacuated their positions in the Jalawla and Qara Tuba, northeast of Diyala province.
The joint Iraqi forces, backed by popular mobilization factions, moved to carry out redeployments in positions under their control prior to the events of June 9, 2014, while political sources spoke of an agreement on the withdrawal of the Peshmerga forces from these sites in the framework of an agreement between the Patriotic Union of Kurdistan and Baghdad, .