(Baghdad: al-Furat News) The Popular Brigades, Saturday, cleared the hills of Hamrin near the southeast of Hawija.
“Popular Brigades brigades 2 – 11 – 42, completed this morning, cleared the hills of Hamrin, adjacent to the south – east of Hawija,” the mass media said in a statement received by the Euphrates News Agency today.
The Popular Forces and the security forces resumed, at dawn Saturday, the second day of the front page of the second phase of the liberation of Hawija.
http://alforatnews.com/modules/news/article.php?storyid=151043
Advertisement

A source in the office of French President Emmanuel Macaron said that Iraqi Prime Minister Haider Abadi before McCron’s invitation to visit Paris on the fifth of October for talks on the referendum of the Kurdistan Region on independence.

McCron earlier offered to help ease the tension between Baghdad and the Kurdistan government over Monday’s referendum and urged that any escalation should be avoided.

Baghdad closed the airspace of Kurdistan to international flights and vowed to control the border crossings of the region.

{Baghdad: Al-Furat News} The United States of America, a “blow to the” referendum to separate the Kurdistan region from Iraq.
“The United States does not recognize the unilateral referendum of the Kurdistan Regional Government (KRG) last Monday, .
“The vote and results lack legitimacy, and we continue to support a unified, federal, democratic and prosperous Iraq,” he said.
“We are still concerned about the possible negative consequences of this unilateral step, and before the vote we worked with both the Kurdistan Regional Government and the central government in Baghdad to follow an effective framework and promote stability and prosperity for the people of the Kurdistan Region. These aspirations can ultimately not be achieved by Through unilateral actions such as this referendum. ”
“We urge the Iraqi Kurdish authorities to respect the role of the central government, which is constitutionally mandated, and we call on the central government to reject threats or even to indicate the possibility of using force. The United States calls on all parties to In those countries neighboring Iraq to reject unilateral actions and the use of force. ”
“We are encouraging all parties to engage in a constructive dialogue aimed at improving the future of all Iraqis,” he said, adding that “the battle against Daqash is not yet over and extremist groups are seeking to exploit instability and discord. We urge our Iraqi partners to continue to focus on a daunting defeat.”
http://alforatnews.com/modules/news/article.php?storyid=151041

US Secretary of State Rex Tillerson on Friday called on the federal government in Baghdad and the Kurdistan Regional Government to calm and stop verbal escalation and threats launched by the two sides against the background of the referendum.

Tillerson said in a statement today that “we do not recognize the referendum on independence held by the Kurdistan Region unilaterally,” adding that “we must stay away from threats and mutual actions in the referendum crisis.”

Kurds threaten demonstrations against Barzani to back down from the referendum

Journal of the
movement of activists in social networking sites on Friday, reports of the existence of an acute crisis and unprecedented in food and fuel in Kurdistan, because of the decisions of the federal government to close the border posts in response to the referendum held by the President of the Kurdistan region (outgoing) Massoud Barzani, despite the domestic and international rejection .

They stressed that “the provinces of Erbil and Dohuk more affected among the other provinces and became the markets of the provinces completely empty of food, which prompted the people to threaten to leave demonstrations condemning the cancellation of the referendum.”

The Patriotic Union of Kurdistan (PUK) said Friday that “the siege imposed on the Kurdish people is more damaging than the ruling leadership.”
“The Kurdistan region is expected to witness a rise in the prices of food and fuel because of cutting off the border crossings with Turkey and Iran, in addition to the decisions taken by the federal government to the region,” said MP Rezan Sheikh, told the «Journal News».

“The Kurdish people are able to overcome the economic crisis imposed on them by the federal government and neighboring countries,” said the party’s deputy Ashok al-Jaf in a statement to the Journal News.

She added that “Iran and Turkey are unable to close the border crossings with the region as they are looking for markets for the disposal of their products in countries in addition to the problems suffered by Iran and the international blockade imposed on them, so it is in the interest of those countries to open ports with the region.”

The Iraqi government, the Kurdistan region to hand over all border crossings, including airports to the authority of the federal government, within 72 hours calling on all countries of the world to deal with them “exclusively” in the ports and oil, while confirmed that “will not discuss or discuss” on the subject of the referendum and its results ” Constitutional.

The Iraqi government protects the rights and privileges of all our people, including our Kurdish citizens. 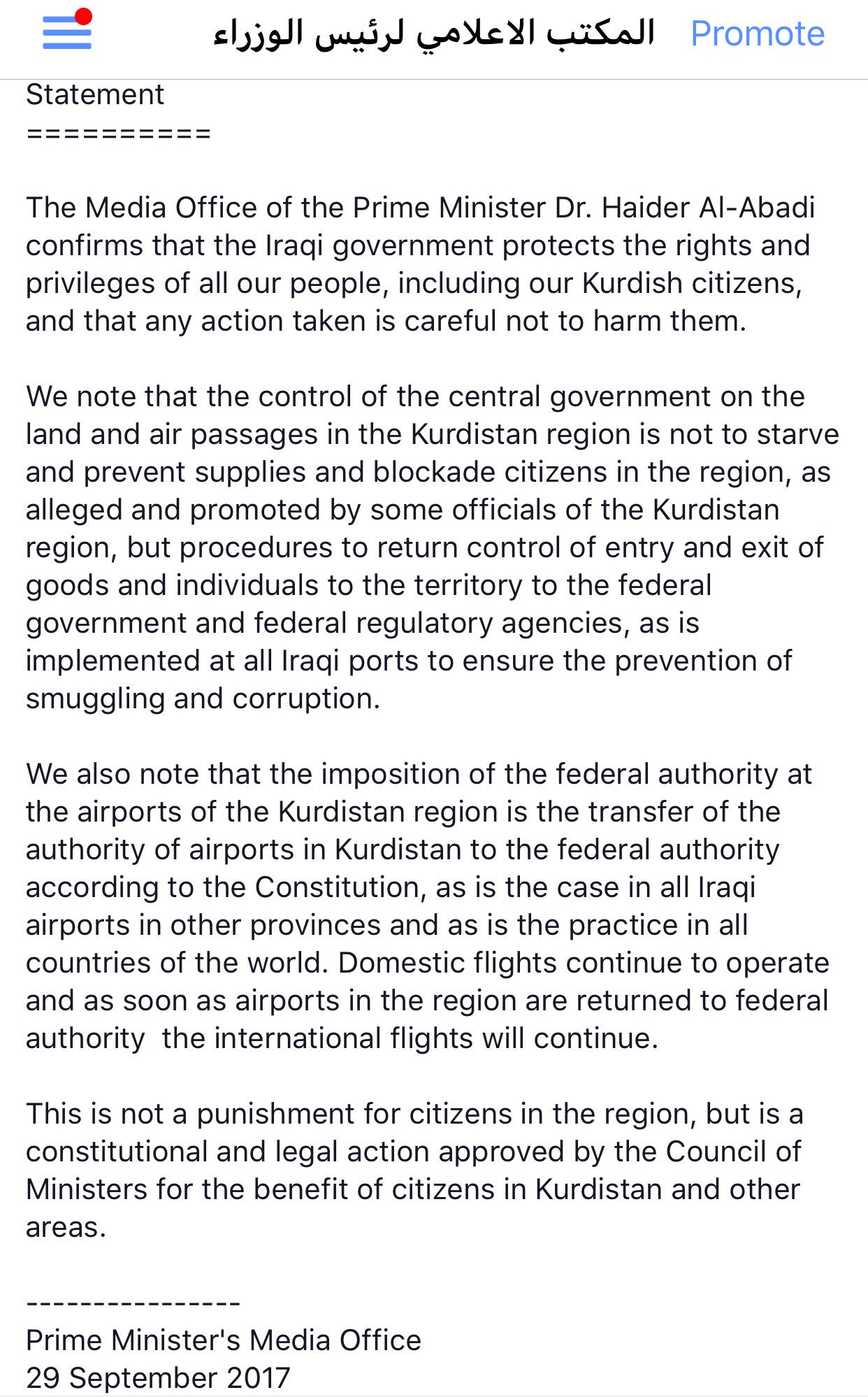 The Iraqi government protects the rights and privileges of all our people, including our Kurdish citizens.

The head of the media office of the Prime Minister Saad al-Hadithi on Friday the entry into force of the ban on international flights to and from the Kurdistan Region, but said that this decision will not include internal flights with other Iraqi provinces.

“On Friday evening, September 29, 2017 the implementation of the decision of the Council of Ministers to stop international flights to and from the region until the transfer of control of the airports of Sulaymaniyah and Arbil to the control and administration of the federal authority began,” the statement said.

He explained that “the suspension of international flights to and from the region came in accordance with the Constitution and international contexts,” echoing saying that “internal aviation continues to maintain the interests of our citizens in the region because the goal is not to punish citizens, but to stop unilateral decisions and unconstitutional by the leaders of the region And the unity of Iraq and the Iraqi people. “

The Joint Operations Command published the latest update on the map of ongoing military operations to liberate Hawija district south-west of Kirkuk province from the grip of the Dahedash organization.

On Friday, September 29, the terrorist organization “Da’ash” suffered heavy human and material losses in the early hours of a military operation to wipe it out and defeat it from another camp in northern Iraq. 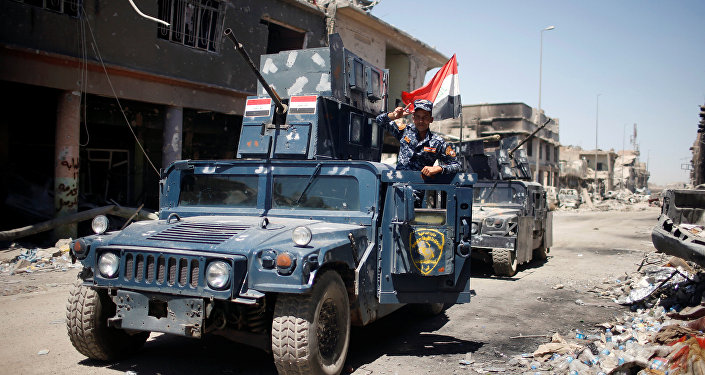 © REUTERS / SUHAIB SALEM
The commander of the Iraqi Federal Police, Major Raed Jawdat, told the correspondent “Sputnik” in Iraq, on Friday, September 29, that the liberation of 10 villages from the control of “Dahesh” in Hawija in a few hours evidence of the collapse of the organization.

{Baghdad: Al Furat News} Federal Police Chief, Lieutenant General Rashid Shaker Jawdat, announced the destruction of the gangs of terrorist gangs in the western axis of Hawija district.
“Federal police units destroyed all the first lines of the defense and managed to regain control of 10 villages west of Hawija,” Jawdat said in a statement received by the Euphrates News Agency.
He pointed out that the liberated villages are “Gharib, al-Garnah, al-Aghaya, al-Khajama, al-Kharja, Ghuraib, al-Mstah, Hamoud al-Khalaf, Al-Nabil and Nemila.” He pointed out that “17 da’asia were killed and the Iraqi flag was raised on its buildings.”
http://alforatnews.com/modules/news/article.php?storyid=151017