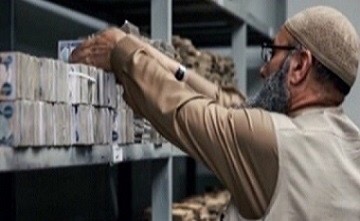 The US Treasury Department on Tuesday imposed sanctions against the so-called “General Treasury Secretary of Daash”, Salim Mustafa Al-Mansour, noting that the sanctions were taken in the context of cooperation with the Iraqi government.
“Under the sanctions, all of Mansour’s financial interests under US jurisdiction have been frozen,” a US financial statement said.
She pointed out that “these restrictive measures against a treasurer has taken place in the context of cooperation between the United States and the Iraqi government in the fight against the activity of the terrorist organization.”
“The Ministry of Finance continues to work in close cooperation with the Government of Iraq to detect the financial networks of” Dahed “inside and outside the territory under his control”

Prime Minister Haidar al-Abadi said on Tuesday that the decision of the provincial council of Kirkuk to include the province in the referendum of the Kurdistan region to be held on September 25 next unacceptable and wrong, while pointing out that the decision unconstitutional.

“The referendum in the province is unconstitutional, it brings more conflicts and it is erroneous and we are open to understanding,” Abadi said during his weekly press conference attended by Mawazin News.

As for the transfer of al-Da’ash from the Syrian-Lebanese border to the Syrian-Iraqi border, Abadi stressed that “what happened yesterday about the transfer of terrorists near the Iraqi border with Syria is unacceptable, worrying and a serious mistake, and this situation must be investigated.” He asked: “How do we allow murderers to move? If they were not killers, why were they fighting? ”

“The security forces foiled many terrorist attacks and they have to be more careful,” he said. “The families of the martyrs and the wounded were killed by the terrorist gangs committed against unarmed civilians yesterday in Jameela commercial area.”

“There is a mafia trying to thwart the reform projects, some are getting two salaries, and a healthy society can not be built on injustice,” Abadi said. “All economic measures and reforms investigate the interest of our people and achieve social justice.”

On the visit of the heads of state to Iraq, Abadi stressed that “the visits of delegations from different countries to Baghdad, the latest French and American foreign and defense ministers, the Turkish and Palestinian foreign ministers, the Saudi minister of trade and the UAE official, and the Czech prime minister are positive signs of the return of Iraq to its Arab and regional environment. And international “.

“We are close to the liberation of the city of Tal Afar, where some of the people fled and left their weapons, some of them are still in Ayadiyah, the last remaining from Mosul, and many of them were killed, An army, a police, a popular crowd and volunteers in these victories. It is the heroism and sacrifice of brave fighters of all formations and swords. We salute them all. ”

“In Mosul, we gave two choices: either surrender or killing, and we did not give them the chance to negotiate and go out, as happened elsewhere,” he said, adding that he had no choice but to leave the country. “Referring to the transfer of elements of an organization calling the terrorist from the borders of Lebanon to the Iraqi-Syrian border

The President of the Kurdistan Region, Massoud Barzani, received a high-level US delegation, and the two sides stressed the continued cooperation and coordination between them.

The head of the Kurdistan Region said in a statement that Barzani received at the Saladin Resort in Erbil on Tuesday a high-level US delegation that included US Ambassador to Baghdad Douglas Silliman, the General Commander of the International Coalition Forces in Iraq and Syria General Townsend and General Funk Who will replace General Townsend as commander of coalition forces and the US Consul General in Erbil, Ken Gross.

The statement added that “General Townsend announced that his mission as commander-in-chief of the coalition forces in Iraq and Syria has ended and will return to his country and will replace General Funk his place in the leadership,” noting that “Barzani wished the two officers success in the performance of their new tasks.”

According to the statement, “the meeting dealt in detail with the situation in Mosul and the fronts of confrontation with the terrorists in general and the area of ​​Tal Afar in particular,” pointing out that “the views of the two sides were identical that the expulsion of Da’ash from Mosul and other areas does not mean the end of terrorism and stressed the continued cooperation and coordination between them.”

The statement also pointed out that “the two sides discussed in another part of the meeting the political and security situation in Iraq and Syria and progress against Dahesh.”

Prime Minister Haidar al-Abadi announced on Tuesday the opening of the border port of Trebil with Jordan on Wednesday.

“Tomorrow will see the opening of the port of Trebil on Wednesday,” Abadi said during a weekly conference attended by Mawazine News. “There is a joint statement to be issued in cooperation with Jordan.”

“We are ready to implement the trade exchange with Jordan and will move the trade movement between the two countries,” Abadi said.

The Director-General of the Public Company for passengers and delegations in the Ministry of Transport, Abdullah Al-Allaibi, earlier, the intention of Iraq to re-run the movement of passenger buses through the port of Trebil border with Jordan soon after securing the road by Iraqi forces.

Iraqi Prime Minister Haidar al-Abadi said on Tuesday that the decision to participate Kirkuk province in the referendum on the independence of the Kurdistan Region of Iraq “wrong”.

Abadi’s speech came at a weekly press conference following a meeting of his government.

Abadi said at the conference, which was followed by Twilight News, that the decision of the Kirkuk Provincial Council with the participation of the province in the referendum on the independence of the Kurdistan Region is “wrong”.

The Kirkuk provincial council voted earlier in the day to participate in the referendum scheduled for September 25 next during a session witnessed the province of the Turkmen Front and the Arab bloc.

Despite its good relations with the KRG, Ankara does not want to see an independent northern Iraq
The Kurdish independence vote in northern Iraq, scheduled for September 25, is mixing up alliances around the Middle East and has major regional powers and the United States increasing pressure on Kurdish authorities to postpone or cancel the vote.

In a sign of the growing concern in Washington that the referendum could create a new conflict in a region troubled by war and instability, US Defence Secretary James Mattis visited Erbil on August 22 for talks with Kurdish Regional Government (KRG) President Masoud Barzani. US Secretary of State Rex Tillerson and US Central Command commander US Army General Joseph Votel also pressed the KRG to think again.
Iraq’s central government is strongly opposed to the referendum as are many of the country’s Arabs and Turkmen. There are fears among some of Iraq’s pro-independence Kurds that the timing of the referendum is meant to consolidate Barzani’s power in Kurdistan.
Mattis stressed that the referendum would be a distraction from the fight against the Islamic State (ISIS) but Barzani has not budged, even if fresh talks between Erbil and the Iraqi government in Baghdad are possible.
KRG officials say the referendum would not weaken the fight against ISIS. The KRG’s military forces, the peshmerga, played a major role in stopping an ISIS advance in northern Iraq in 2014 and have been receiving Western military aid to strengthen the fight against the jihadists.
The prospect of an emerging Kurdish state, a dream for many Kurds since world powers proposed an independent Kurdish entity after the first world war, is rattling Iraq’s neighbours Turkey and Iran, which have sizeable Kurdish minorities of their own.
The leader of Turkey’s nationalists, Devlet Bahceli, suggested the KRG referendum should be officially labelled a cause for war by Ankara but Turkish Prime Minister Binali Yildirim dismissed the idea. Turkey has been enjoying close ties with the autonomous Kurdish region in Iraq, which has become a major trading partner for Turkey.
Despite its good relations with the KRG, Ankara does not want to see an independent northern Iraq. Turkish Foreign Minister Mevlut Cavusoglu travelled to Baghdad and Erbil to stress, he said, that the “future of the Kurds lies in a united Iraq.”
Ankara is concerned that an independence vote for northern Iraq could become a model for northern Syria, where Kurds have created zones of autonomy along the Turkish border. Ankara sees those Kurds as affiliated with the Kurdistan Workers’ Party (PKK), which has waged an insurgency against Turkey since the 1980s.
Turkish President Recep Tayyip Erdogan has reiterated that Ankara would not allow a Kurdish state to develop in northern Syria. The Turkish government also said it would not recognise a Kurdish state on KRG territory.
The referendum and activities of Kurdish rebels in the region have led to a rapprochement between Turkey and regional rival Iran. The two governments agreed during a recent visit of Iran’s military chief, General Mohammad Bagheri, to Ankara that the independence vote could be destabilising for the region.
The referendum is also opposed by the PKK, whose militants have bases in northern Iraq despite the KRG’s objections. The PKK-affiliated Yazidi militia, the Sinjar Resistance Units (YBS), said it would not allow the referendum to take place in the areas that it controls.
Thomas Seibert is an Arab Weekly contributor in Istanbul.

(Baghdad: Al Furat News) On Tuesday, the army and the supporters of the popular crowd liberated the village of Gulu Bash, east of Ayadiyah district northwest of Tal Afar district, west of Mosul.

“The army forces and the support of the crowd and the federal forces were able to liberate the village of Gulu Bash, east of the Ayadiyah district completely from the control of Dahesh,” the statement said, adding that “the security forces imposed a military cordon around the center of the district from several axes.”

He pointed out that “the 16th Division of the army, the crowd and the federal, broke into the Ayadidya and is fighting very fierce battles within the area.”